And the Award Goes to Acidity, for Best Supporting Actor 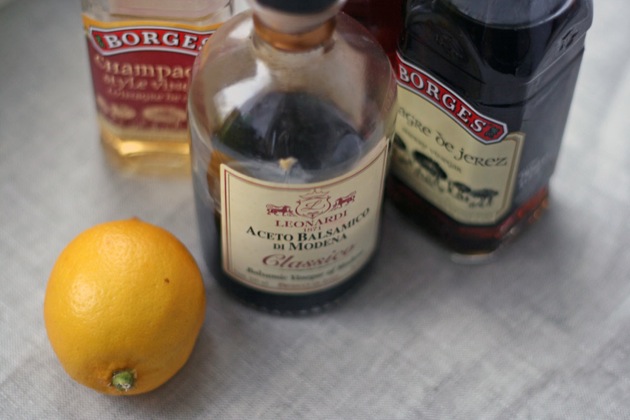 Occasionally, I guiltily pause to consider how much salt I put in my cooking.  Only occasionally.  But when I'm cooking pasta--throwing in handfuls of the stuff to ensure the noodles are full of flavor--I think, "this can't be good for me."  But then I think that the greater crime is eating food that doesn't taste as flavorful as it possibly can.  What a waste of calories to consume something knowing it would taste better if it were seasoned properly.  I'm lucky to be young and skinny and still able to reasonably say "I'll think about salt consumption later."  So I often add more.  But sometimes...I wonder.

Sometimes I'll sit down to a bowl of risotto or soup or something rich like a stew, and find myself craving more flavor but not more salt.  It usually happens when the dish is rich and developed, the flavors competing with one another, and I feel the taste needs just a little boost so that they are fully defined.

It happens to me regularly.  Generally, the two secrets I turn to for flavor are salt and butter.  (I think most people would faint if they saw the amount of salt and butter used in restaurant kitchens--there's a reason food often tastes so much better than what comes out of a home kitchen, and two of those reasons are salt and butter.)  Have you ever tucked a smidgen of butter into a bowl of pasta, allowing it to melt in the hot noodles?   Or sprinkled Maldon sea salt or Fleur de Sel over a piece of fish?  They work wonders.

But the other day something changed the way I look at seasoning.  I was tinkering with a pot of chili when lightning struck.

I had a big hunk of beef roast left, my beloved sauerbraten that I made last week .  I'd already turned some of it into a hash with the leftover potatoes and cabbage (fry onions in butter, add a mix of the roast ingredients and enough milk to moisten everything thoroughly, then let it sit untouched over medium heat for ten minutes until crusty and crispy), so I was looking for a way to use up the last of it.  I set out to make a simple chili -- not the authentic Texas-style , but with tomatoes, beans, the whole lot.  Some onions, garlic, and a fresh red chili softened in oil, then chili powder, cumin, and salt stirred in to marry in the oil.  Then a can of tomatoes, some tomato paste, red kidney beans, and the rest of the sauerbraten roast, cut against the grain so it crumbled into little pieces that practically melted into the chili. Next a cup of water to thin it out and allow all the flavors to easily mix and slosh around, which would reduce away anyway as the chili simmered.

After 20 or 30 minutes of simmering, the flavors had melded so I started to taste for seasoning.  It needed salt, so I added that along with freshly ground black pepper.  But there was some other flavor in there I wasn't used to, something lip-smacking, which I wanted more of .

Then it occurred to me: I was tasting the sourness from the sauerbraten (sauerbraten means "sour roast").  I went into the fridge and spooned some of the extra roast sauce into the chili, which was essentially a thick vinegary soup that had a pleasant sourness but no harshness.  The chili got even better.  But still.  I wanted more of that flavor.  I might have reached for lime juice but didn't have any, so I splashed some red wine vinegar in.

When I sat down to eat it, I was amazed at the flavor of the chili.  At how bright and clean it tasted.  It was rich and meaty but the acidity had clarified the flavors and put them into relief.  The flatness of the flavor that sometimes plagues rich dishes was gone.

I began to think back to dishes I've eaten that have been helped by acidity. The roast chicken with rice and beans at La Taza de Oro in Chelsea, a Puerto Rican diner, one of Nick and my favorite meals when we lived in New York.  I remember the moment we noticed the bottle of white vinegar on the table, and that everyone else was liberally splashing it on their rice and beans.  I thought about a lamb shank tapas Nick and I ate at Casa Mono , and the way it tasted incredible until we noticed the grilled lemon half next to it, which, when squeezed over everything, sent it from incredible to transcendent.

There is a wide window in the seasoning spectrum between undersalted and oversalted.  When something is oversalted I know: it tastes like salt.  But with the help of acidity (vinegar, citrus juice, tamarind, wine, even sour cream and yogurt) it's easier to avoid that dangerous over-saltiness which can ruin a dish.

Think of an avocado.  Alone, it's rich but plain.  With salt it gets deeper and more complex.  But with lime juice, it suddenly brightens and gets into balance.  The acidity is a key element along with the salt.  If you will, the supporting actor.

It doesn't work for everything.  But the next time something is lacking flavor,  reach not only for salt but acid as well.