"Why cucumber sandwiches? Why such reckless extravagance in one so young?" 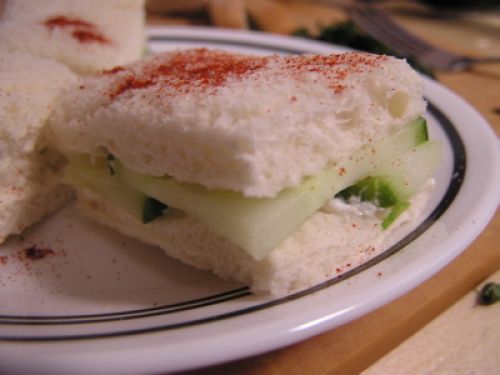 (Hey everyone. Be sure to check out my most recent post on cucumber sandwiches for a slightly more authentic version.)

"...Hallo!  Why all these cups?  Why cucumber sandwiches?  Why such reckless extravagance in one so young?"
-Jack, from Oscar Wilde's The Importance of Being Earnest

After my body had officialy rejected anything of substance thanks to my weekend cheesesteak binge, my mind dreamt of something a little more, well, superfluous.  I wanted less of everything.  I wanted to eat a meal, to relax and make quick jokes instead of lying heavily on the couch recounting former glories like an out-of-shape football player.  After keying in all the vegetables I could think of on epicurious.com, the cucumber rang in my mind.  Oscar Wilde starting talking to me.  And I knew what needed to happen next.

It sounded like a wonderful little game, but finding cucumber sandwiches isn't as clear as I had hoped.  Apparently the sandwiches were a little too English for the Joy of Cooking, and most of the sites online wanted to add all kinds of meats to the sandwich to give it heft.  I didn't want heft.  I wanted the insubstantial.

Loads of English Tea websites will pop up if you google cucumber sandwiches, and most of them are worthless.  I settled on two.  One suggested the inclusion of mint, another ingredient I think of as light.  The other called the creation "Best Cucumber Sandwiches".

It's all about the lightness with these sandwiches.  I wanted to cover every inch of the bread with the seasoning, but held back, because the cucumbers needed room to breathe.  What I didn't expect was for them to be so good.  Maybe it was my full stomach, maybe the thought of cheez whiz that still lingered in my mind from the weekend.  Regardless the nature of your own binge, these sandwiches are like a snippy Sunday morning friend who makes the world calm again.

I can safely say I'd never had cucumber sandwiches before, and I undertook this mission more as a joke than of something of real importance.  But like Algernon says later in the play, "I hate people who are not serious about meals.  It is so shallow of them."  Take them seriously and you'll enjoy real insubstantial delight.
-Nick 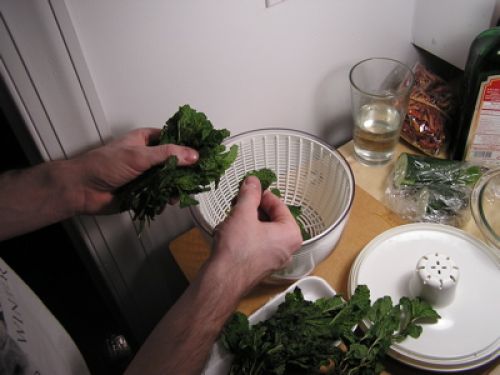 Quickly pick off some mint leaves and place them in a salad spinner, or rinse them all by hand and shake the water at a friend. 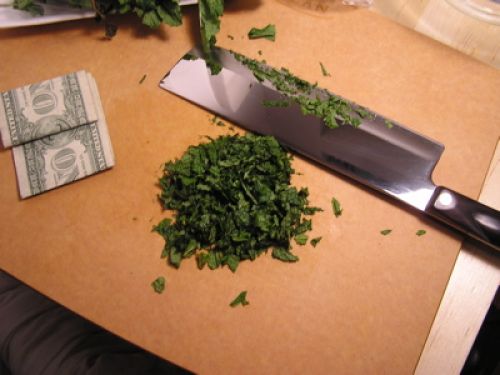 Dry the leaves, then dice them into oblivion. 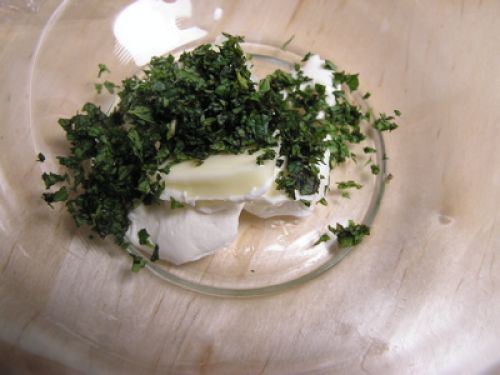 Place the cream cheese, butter, and mint into a bowl and mix well.  It helps if the cream cheese and butter are softened ever so slightly.  It should become a sort of herb paste. 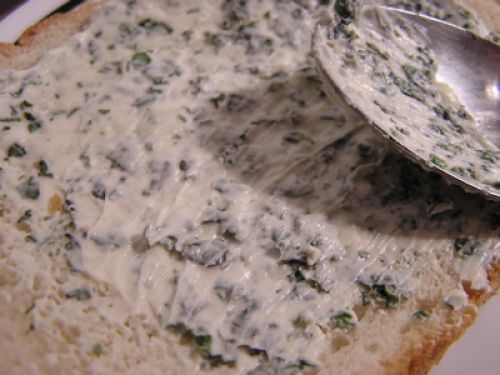 Spread the mixture on the bread. 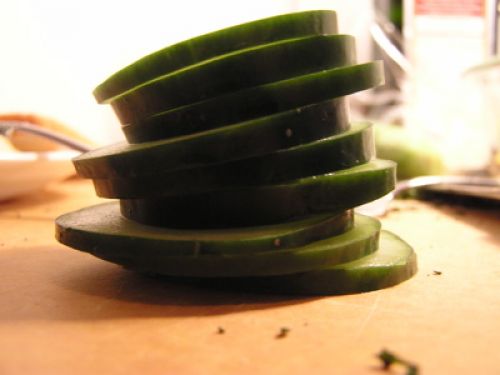 Slice the cucumbers -- how thick you'd like to slice them is up to what kind of crunch you want in your sandwich.  Me, I'm right in the middle. 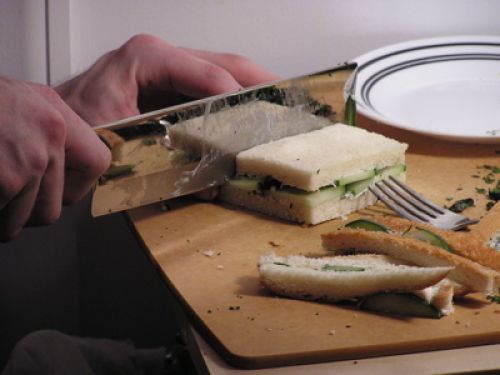 To be all proper, slice the crusts off and slice the sandwich up into nice little finger-approved rectangles. 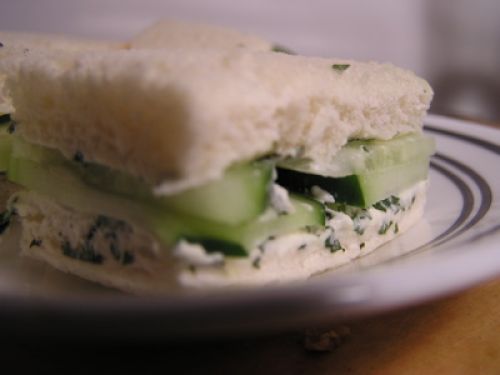 Just like this.  You may also opt for the diagonal slice, creating triangles.  Pick up delicately between thumb and forefinger.  Crunch. 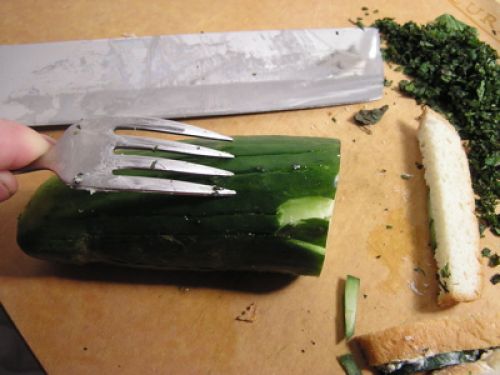 For the "best cucumber sandwiches", things get fancy quick.  Score the sides of the cucumber with a fork.  Just run a fork over the sides, slightly puncturing the skin.  I'm sure the cucumber is now able to soak up the goodness of the vinegar bath that shortly awaits it, but also they just look nice.  Slice the cucumbers to your desired thickness.  In a bowl pour in the vinegar and the water.  Place the cucumber slices in the bowl and let them sit for 30 minutes.  If desired, cut two extra slices to put over your eyes while you wait. 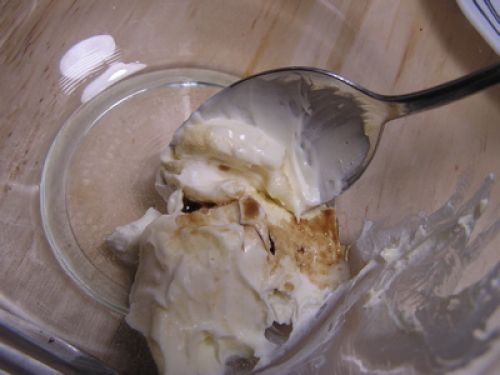 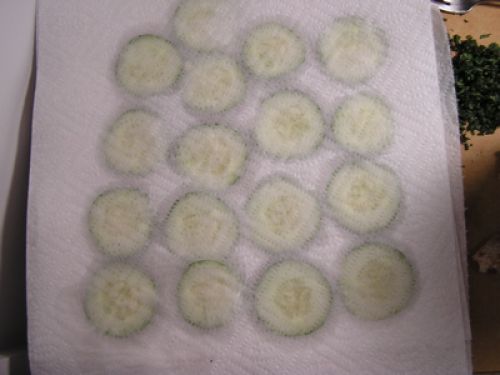 Drain the cucumber slices by placing them between two paper towels.

Put the spread on the slices of bread.  Place the cucumber slices on the bread.  Slice in whatever superfluous way you'd like.  Top with a dash of paprika.  Again, use thumb and forefinger to handle delicately.  Brew some tea.  Call your friend Jeeves.