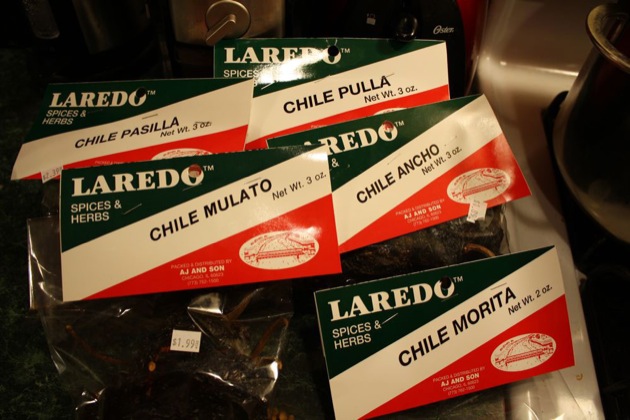 That meant forgoing the blend I had in my spice rack and picking up a load of dried chilies from the local Mexican market.  I needed to create my own blend, something that was completely unique to me, but where do I start?  There honestly aren't that many recipes for chili powder out there.  My only real resources were Homesick Texan (great site) and Alton Brown .

Thanks to the large Mexican population in Chicago, I have a much firmer grasp on chilies than I did even a year ago.  I started building my own blend in my head.  I wanted a round taste, something that would hit every part of the tongue.  I ended up with guajillos, anchos, pasillas, moritas, mulato, and pulla.  I toasted each separately in a pan and then stuck the chili straight under my nostrils and inhaled.  If it tickled my nose in a particular way, I'd toss it in the blend.

I wouldn't exactly recommend this method.  My nose nearly lost all feeling for a few hours.  I sneezed for days afterward.

But here's what I settled on:  I've long loved pasillas for their depth and almost chocolate-like flavor.  I knew they'd be in.  The mulato had a similar earthy aroma, so I included them, too. Moritas are smoked jalapenos (like a smaller chipotle), and they had a unbelievably rich and smoky aroma.  Definitely in.  To round out the blend, I used some Anchos for some of the higher, spicier notes. 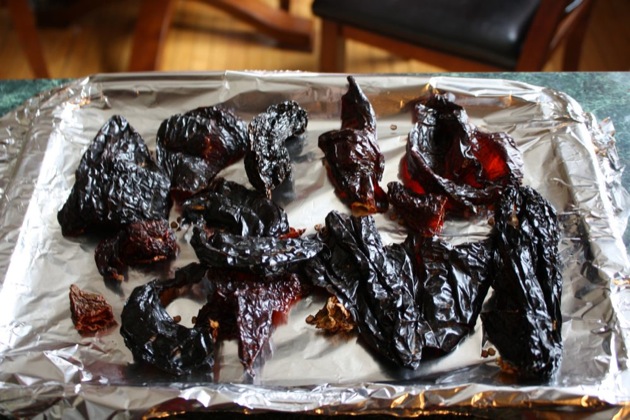 To make the blend I took a cue from Homesick Texan and roasted them all in an oven set at 300 degrees for 5 minutes.  This made them incredibly easy to work with compared to toasting a handful in a skillet.  I'm doing this from now on.  Then I just tossed them all in a blender and processed them until they became a fine powder.

But that's not all that's in chili powder.  Most contain garlic powder, cumin, oregano, and paprika in various degrees.  For the proportion of spices I turned to Alton.  I toasted the cumin quickly in a skillet and then added it to the blender along with the garlic powder, oregano, and paprika.  Another minute of blending and I was done.  I can't believe how easy it was to create my own personal chili powder.  And it's flavor was pungent and earthy, with little bits of spice that tickled my nose.  It made that bottle in the spice rack look silly.

Obviously this earthy, rich version suits me, but it's not the only combination of chilies that works.  Most recipes use guajillo or New Mexico chilies.  Creating your own mix of chilies is as easy heating them up and then tossing them in a blender, so suit the blend to your palate. 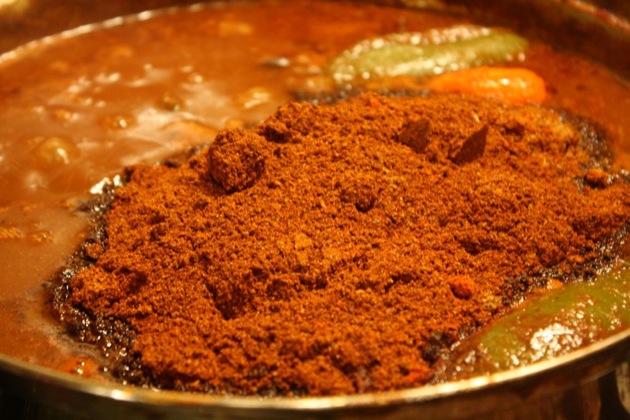 With the chili powder down, I set my sights towards the chili recipe, which I'll explore tomorrow.

1.  Preheat an oven to 300 degrees.  Place some aluminum foil on a baking sheet.  Toss on the chilies and the cumin seed.  Transfer to the oven and cook for 5 minutes.  Remove and let cool.
2.  Add everything to a blender.  Process until it is a fine powder.