Kimchi and Me: Steak and Eggs over Kimchi Rice

Lest you all forget my infatuation with the pickled cabbage , it is powerful.  When I worked in Manhattan, the attraction to the stuff had me trudging over to the Korean buffet at least once a week.  But I no longer work in Manhattan, and while I'm very happy with my new job, I do miss my kimchi.

I’m not sure why it never occurred to me until now to secure my own stash.  Like a lot of ethnic foods, I always wanted to place the trust of the food into knowledgeable hands.  Maybe it still retains it's mysterious appeal that way.  So I looked into making my own, which ended up being a rather short search.  The problem, unfortunately, was that kimchi was hard to make, and not just because of the long list of ingredients.  Koreans are known to bury barrels of the stuff in the ground for months while it ferments.  In my tiny kitchen, where smells whaf around with glee, it didn’t seem like the best time to go fermenting my own.  Maybe some day.  But for now I'd have to settle for something a little more practical, like purchasing some.

I thought that would be a piece of cake.  I live by Fairway Market, which has just about everything a person could ever need.  Except for, of course, kimchi.  So I took off to Queens (for some shadowy reason , there aren’t many Korean grocery stores in Brooklyn ).  And that’s how I ended up in Elmhurst at Pacific .  It was a fairly average sized store that was serviceably clean.  I’m not sure if I was expecting Chinatown chaos with crowds, pushing, and fresh meat laid out haphazardly around, but this looked like any other grocery store albeit with more fish.  I paced around the store in search of my cabbage, and looked over the enormous meat counter, the bins of vegetables, and the fish tanks (Side note, this was the first time I’d ever seen a live tilapia before.  For a fish that has become so popular for its cheapness, it was a little disconcerting that I’d never actually seen a live one before). 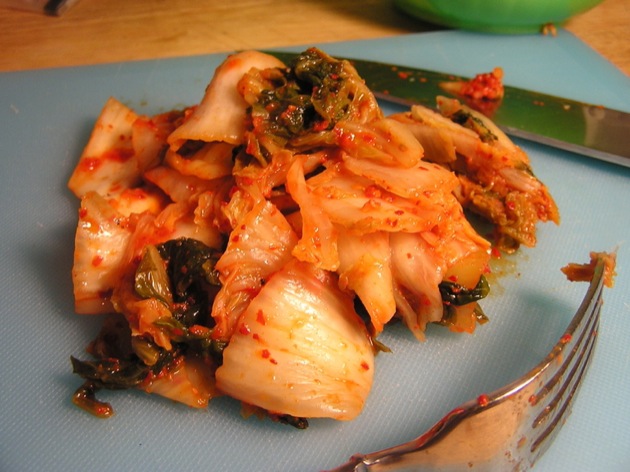 Anyway, in one of the back corners were a few glass containers of kimchi.  There was only one kind.  I took it home, slide open the lid, and scooped out a nice healthy amount of the stuff, which I immediately packed into my mouth.  Beautiful!  But after the second bowl, I realized it needed a partner, and that’s where my knowledge skidded off the rails.

A good way to slowly immerse oneself in a cuisine is to find some context.  And in that case it was The Good Fork . The restaurant is out in Red Hook, Brooklyn, across the street from where I work.  It was voted best new Brooklyn restaurant by Time Out New York , and best neighborhood restaurant.  That would explain why it is packed nearly every day.  The chef is Korean/American and one of her specialties is steak and eggs over kimchi rice.  I had the steak, I had a nice jar of kimchi, how hard could that be?

I didn't have any idea what to do.  So I just looked up a recipe for kimchi fried rice, and then grilled steak, and cooked an egg and put it on top.  Simple enough.  I didn't quite reach the heights of the Good Fork, but it was good.   And I got to use my favorite new purchase. 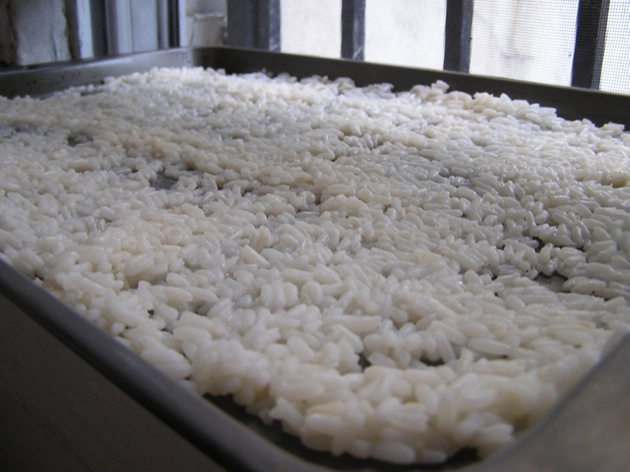 Cook cups of rice according to the directions on the box.  When done, let it cool, preferably overnight.  Of course, that's entirely too long to wait.  So I spread it out on a large sheet pan and placed it by the window like a southern lady in the 1900s would with an apple pie. 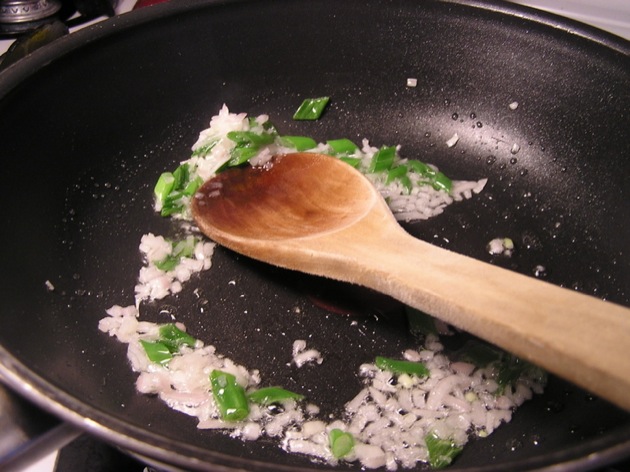 Saute the sliced green onions and shallot with a tablespoon of oil for a couple minute over high heat.   Add the chopped kimchi and cook until softened, about 2 minutes. 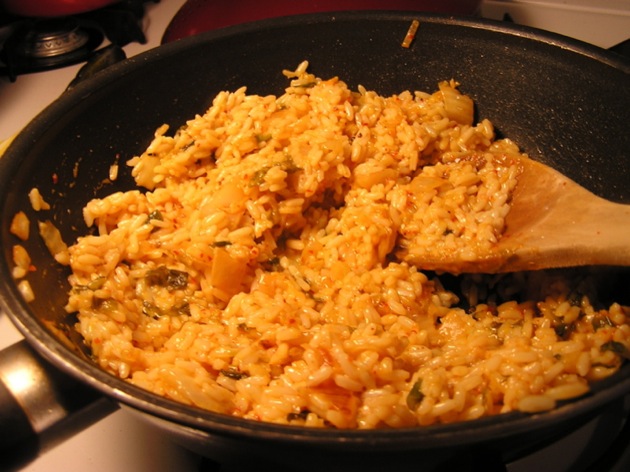 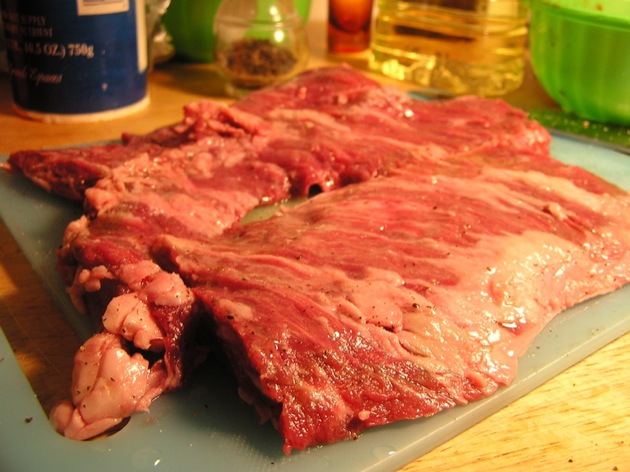 Season the skirt steak with salt, pepper, and a little bit of oil.

Set a cast iron skillet over very high heat for at least 5 minutes.  Toss in the steak and cook for 3-4 minutes per side. 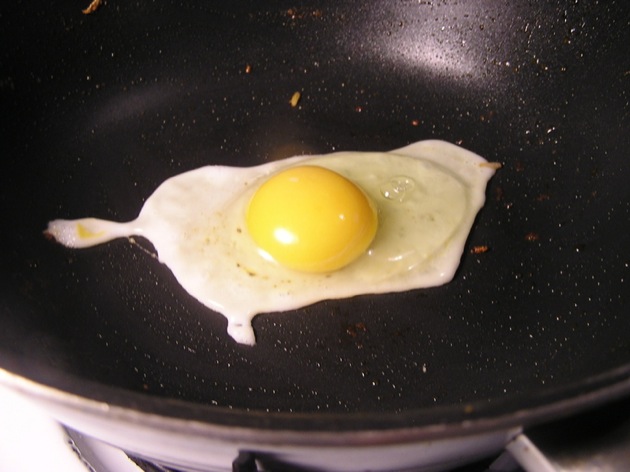 At the very end, saute an egg in a little oil. 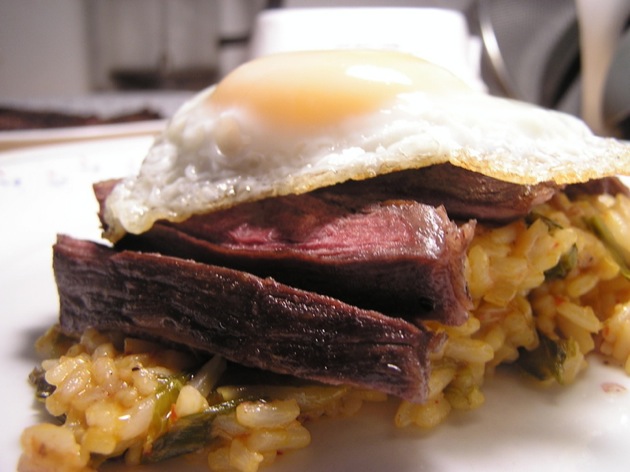 Slice the steak attractively, and lay it across a pile of the kimchi rice.  Then place a nice egg on top.  Break yolk and watch the goodness seep all over the steak!