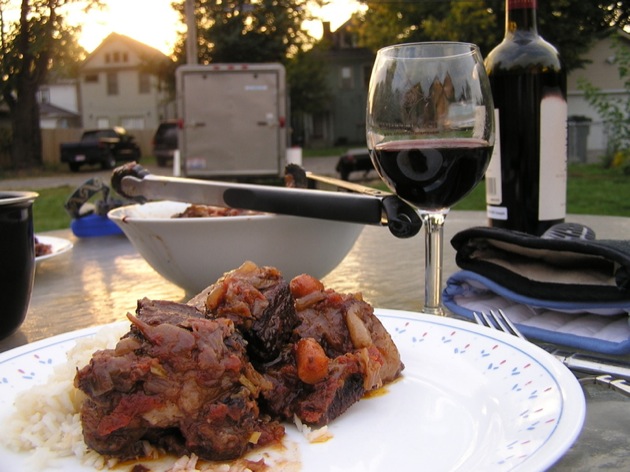 As you may or may not remember, I’m attempting to go somewhat local. Click back to Week 1 to see how it got started.

We’ve written about short ribs twice before and I’ll be honest in saying this isn’t the master recipe.  Part of the problem is that both previous recipes were really Blake’s babies.  It was his pot and his enthusiasm that spurred the effort.  While I was there for the first go round, I was more or less chopping away.  And during his apparently wonderful second attempt, I wasn’t even around.

So this is my first shot at succulent excess, and like many things I attempt for the first time I winged it.  I figured some recipes into the process, consulted when I felt loss, but mostly I just threw some things together and tried to make it taste good.

There are really two reasons why I felt it needed some light in the cyber-space.  First, it essentially is all local.  I could have very easily just gotten local short ribs and called it a day, but everything from the fat, onions, garlic, to the herbs, were all local.  Basically the wine and canola oil were the only foreign objects.  I’m proud of that.  Second, it failed in a completely unique and spectacular way, which differentiates it from all the other previous failures. 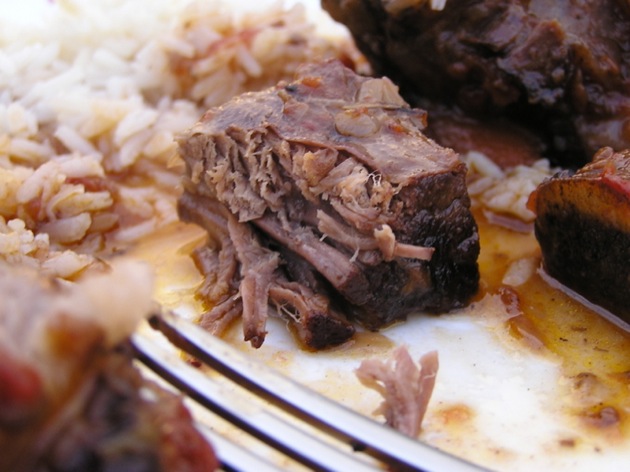 Not that it wasn’t stupendously tasty (it was) or that I failed to gather the right ingredients (I didn’t).  I just hadn’t expected one little aspects of short ribs: the fat.  They are loaded with it.  Not only did I not correctly figure in the amount of fat in short ribs, I decided to make things even more ridiculous by adding an egregious amount bacon fat, just to keep things even more local.  At the end of the braising time my meat was perfectly done, but the sauce was laden with bubbling grease.  I couldn’t just be skimmed off.  It tasted slimy and disgusting.

Luckily I did enough research to find out that if you let the short ribs rest in the fridge over night a lot of the fat will float to the top, gel together, and make it mighty easy to skim right off.  It’s the only way this dish was saved.  It could have been a disaster.

I guess the lesson is to trim some of the fat off the short ribs, and then saute them in much less grease.  That might save you from having to spend hours of your night cooking up this labor intensive and
fantastic smelling dish, and then having to stuff it in your fridge and wait a day to eat it.

It was inspiring to gather a bunch of local ingredients and put out something of this richness.  I was a little worried I’d be skipping on my favorite things during this month, but that just hasn’t been the case. 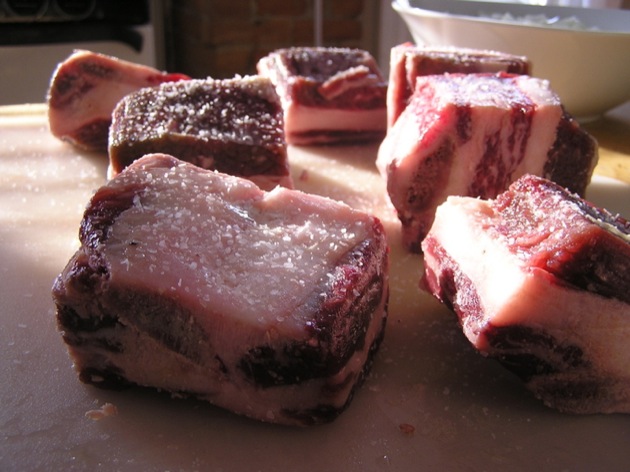 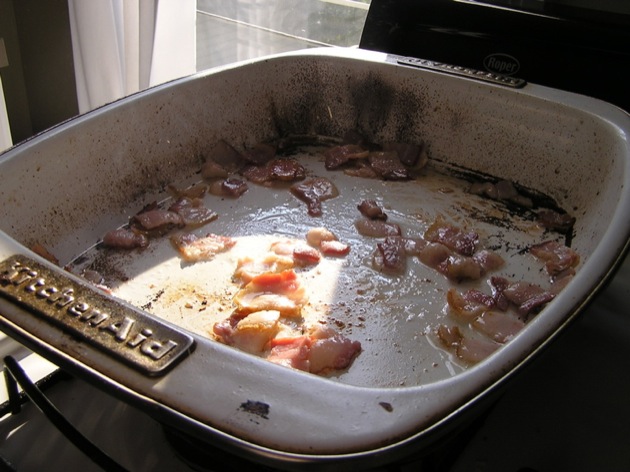 Preheat the oven to 375 degrees.

In a heavy bottomed roasting pan, saute the bacon until fat has rendered.  Remove the bacon, add the Canola oil, and turn the heat to high. 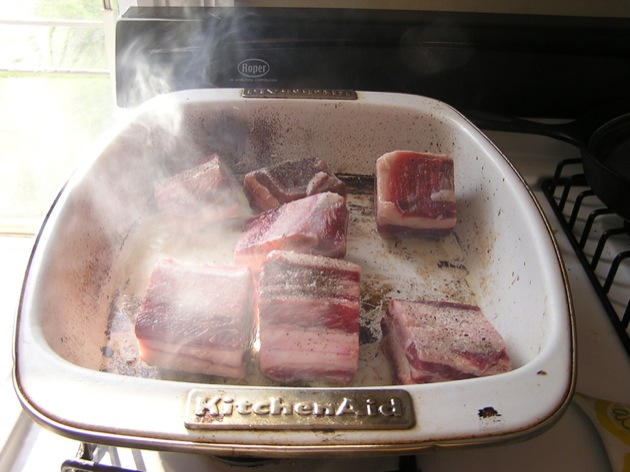 Once almost smoking, add the short ribs.  Saute four about 4 minutes per side, or until nicely browned all over. 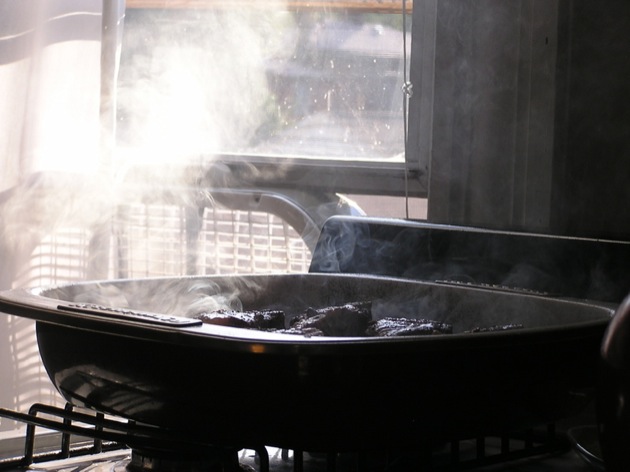 If you do it right, it will smoke.  I had to put a fan in the window to keep air moving out. 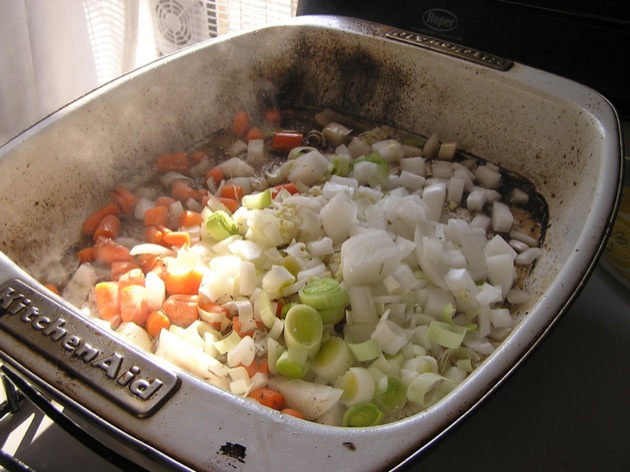 Remove the short ribs, and add the onion, leeks, carrots, and garlic.  Saute for a few minutes until a little tender. 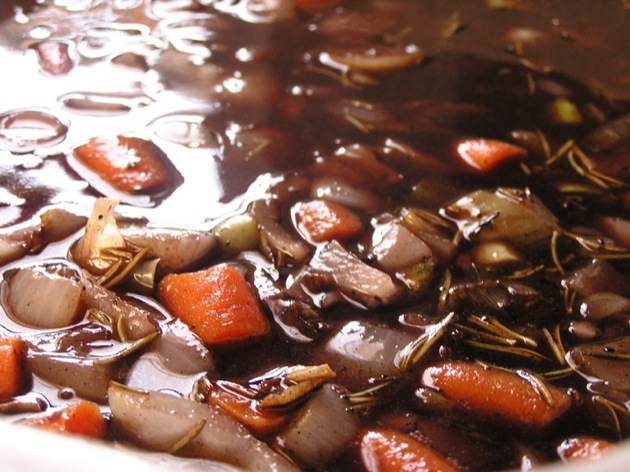 Add the wine and broth.  Scrap the bottom of the pan to release any browned bits on the bottom. 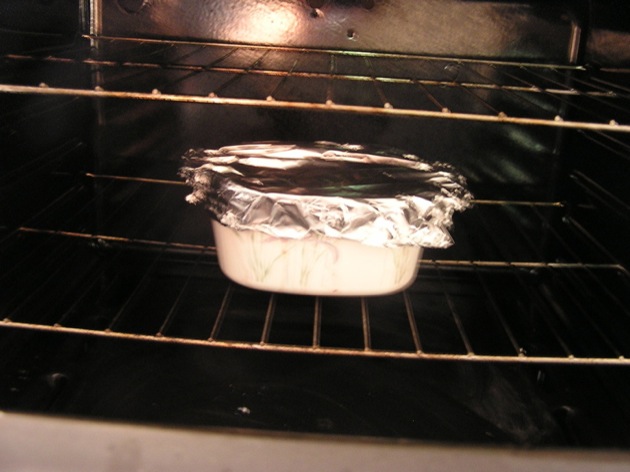 Place the ribs back in the roasting pan, cover the pan with aluminum foil, and place in the oven.  I decided my roasting pan was a little too big, so I found a much smaller baking dish.  That way everything fit nice and snug.

Let be for at least two hours.  don’t look! 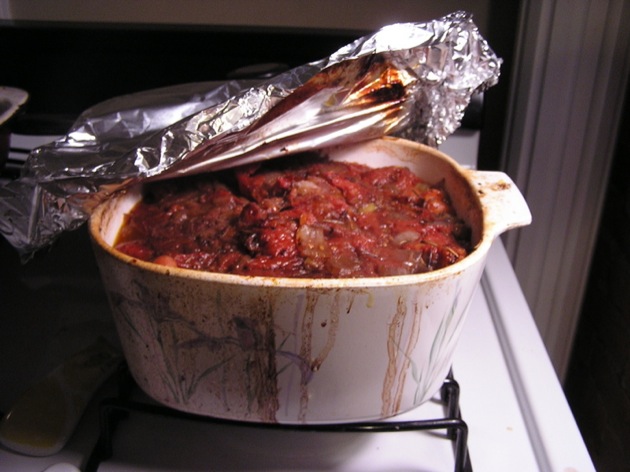 Remove from the oven and peel away the aluminum foil.  Let cool on the counter for at least 30 minutes.  Then recover and place in the fridge.  Let sit for at least a day. 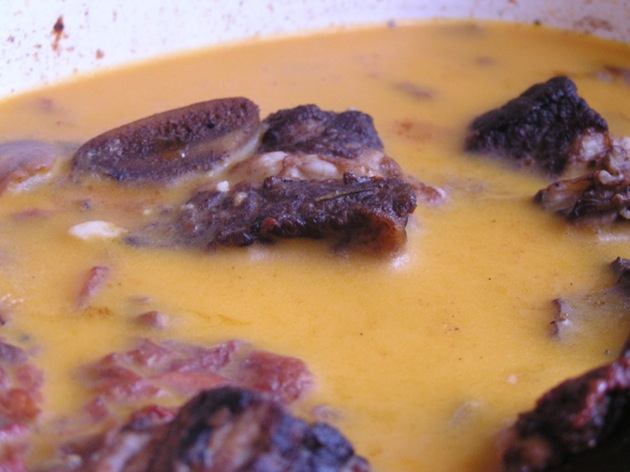 That's a lot of fat!

The next day, remove the fat with spoon and discard.

Then reheat the contents in a pan over medium heat.  When everything is nice and hot, about 15-30 minutes, remove the short ribs.  Turn the heat to high, and reduce the sauce until it has reduced by a little
under a half.

Plate the short ribs, pour the sauce over, grab some wine, and enjoy!