Macaroni Gratin vs. Macaroni and Cheese 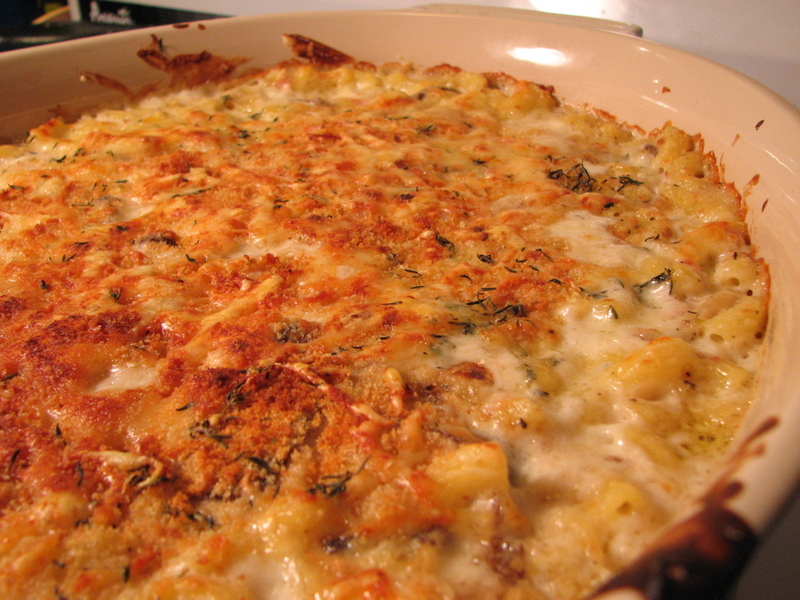 I’ve already done my public fawning over Thomas Keller’s cookbooks.  The absurd attention to details, the flowery short essays about “the importance of onion soup” in the philosophy of bistro cooking, the potential of preparing-ahead the “building blocks” of cooking (like soffrito and aioli ) that allow you to continue preparing uncomplicated dishes with simple, inspired combinations, while introducing a tremendous amount of flavor and depth.  With a little effort once a month, your pantry and fridge can be stocked with the kinds of easily-incorporated ingredients that, when thrown into a soup, slathered or over a steak, or brushed onto a baguette, will help elevate your cooking to greatness.  I’m convinced that this tool of preparation is the difference between good home cooking and great restaurant experiences.

Other times, the recipes provide a new way of looking at a dish.  American Macaroni and Cheese, when made with a little Bechamel/cheese sauce stirred into pasta, has never hit the spot for me.  I find it thin and lacking depth.  I’ve been searching for the Platonic Ideal of Macaroni and Cheese: something robust and crusty, creamy without being oily, filling but not heavy.  Last year, when the New York Times published an article about why everybody was mislead about Macaroni and Cheese (people are actually making Macaroni with Cheese Sauce , while the author offered a version with only pasta and cheese, which I made and which was oily and heavy ), it was on top of the most-emailed list for a couple weeks .

I've reached a dead end with Macaroni and Cheese.  You make the flour/milk sauce, add cheese, and stir in the pasta.  It's good, but not great.  Sometimes I've tried baking it, but it comes out gooey and even oily.  I've tried using uncooked pasta in a very wet sauce and letting it cook in the oven.  I've tried a simple pasta water and butter base with Parmesan--nice and light, better than boxed, but not the revelatory experience I've been searching for.

Perhaps this gratin technique will give me a new set of techniques and ideas.  This recipe runs in the opposite direction from the cheese-only camp, depending on Mornay Sauce, a Bechamel sauce flavored with nutmeg and Gruyere cheese, more about sauce than cheese.  You stir in the macaroni and other ingredients (julienned ham, wild mushrooms), transfer to a shallow baking dish, top with more cheese and breadcrumbs, and bake.

Larousse Gastronomique defines a gratin as “the golden crust that forms on the surface of a dish when it is browned in the oven or put under the grill (broiler).”  This forms a protective layer on the surface, which guards the moisture of the dish underneath and improves its taste.  These days, a gratin recipe seems to mean a dish of vegetables or potatoes cooked with a large amount of heavy cream and other fats like butter, put into a baking dish, covered with a strong cheese (like Gruyere or Parmesan) and breadcrumbs, then baked until browned and crispy on top.  In other words, the fattiest most luxurious dish you could imagine.

I can't say I've yet reached the Platonic Ideal I'm looking for, but this is a very excellent recipe that makes fabulour leftovers.  I'd probaby double the cheese next time to tip the scales in the direction of Mac and Cheese, away from Macaroni Gratin.  But there aren’t too many ways to mess this recipe up, though it does take time.  Use a very heavy-bottomed dish (a dutch oven works well) when making the sauce, since it’s liable to burn in its 30 minutes of simmering.  Be careful not to cook the dish longer than the indicated time. If the top isn’t browned, just throw it in the broiler, but don’t try to cook it longer--the fat globules risk releasing from the cream solids and becoming oily deposits (I’ve been reading Harold McGee’s On Food and Cooking; forgive my forays into dorky food science--but it’s true, be careful).

For the Sauce Mornay

For the Macaroni Gratin

In a very heavy-bottomed large saucepan with lots of room, melt the
butter.  If you have a heat diffuser, use that.  Add the onion and a
pinch of salt and saute gently for 2-3 minutes.  Add the flour and stir
well, never allowing the flour to brown.  Switch to a whisk and slowly
add half the milk while whisking constantly.  Add all the cream while
still whisking, then the rest of the milk. 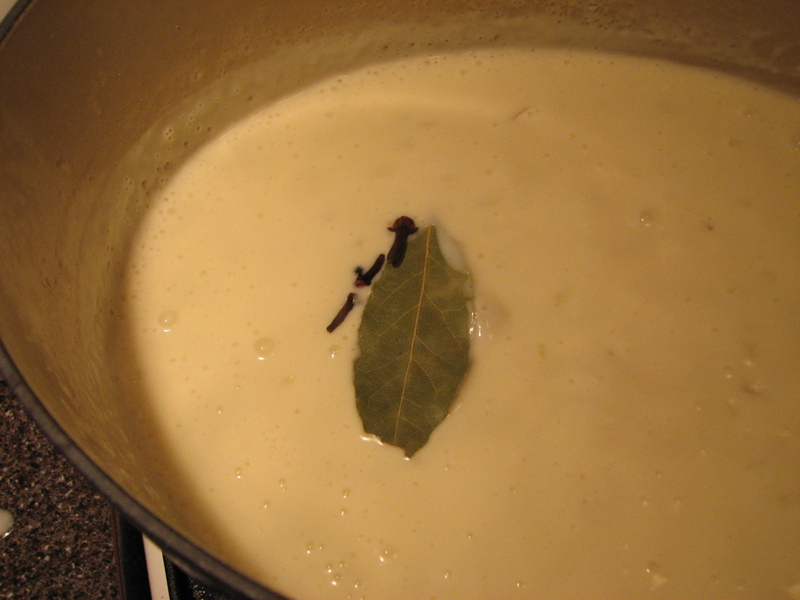 Bring to a simmer, add the
bay leaf, peppercorns, and cloves.  Turn the heat as low as possible
and simmer the sauce, whisking occasionally, for 30 minutes.

In the meantime, boil some water, preheat the oven to 375, prepare the
mushrooms or ham or both, mince your time, and grate the cheese.  With
a 10 minutes left for the sauce, cook the macaroni until tender, then
drain and run cold water over it to prevent sticking.  Remove the sauce
from the heat and season with salt, pepper, and nutmeg to taste.
Strain it to remove the cloves and peppercorns, add the cheese, and
whisk until it’s all melted. 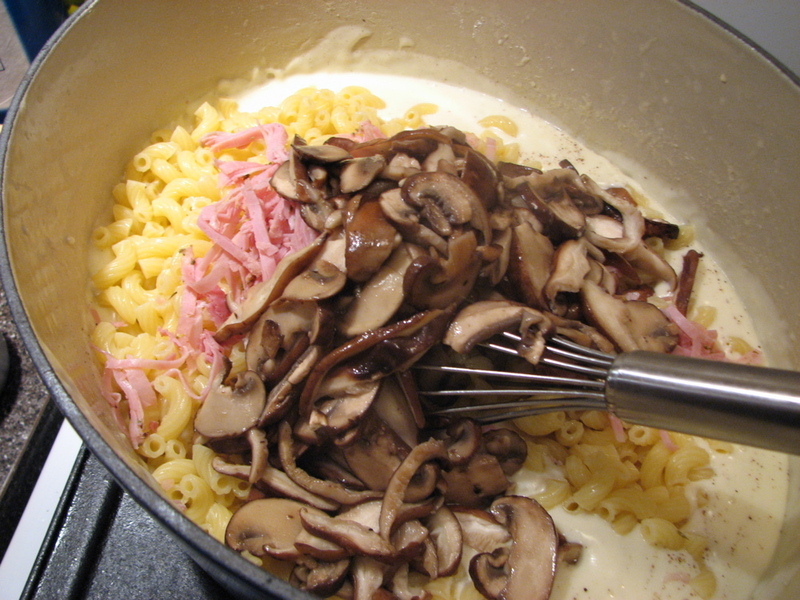 Add the macaroni, mushrooms, and ham, and stir to incorporate.  You’ll
notice the sauce is very loose--the pasta will absord much of it in the oven.  Pour into a 9 X 15 inch gratin dish, or
individual large ramekins.  Sprinkle with cheese, breadcrumbs, and
thyme.  Cook on a baking dish in case it bubbles over at 375 for 15-20
minutes.  Turn on the broiler if it’s not browned.  Serve in its dish
on the table with a crisp salad and light red wine. 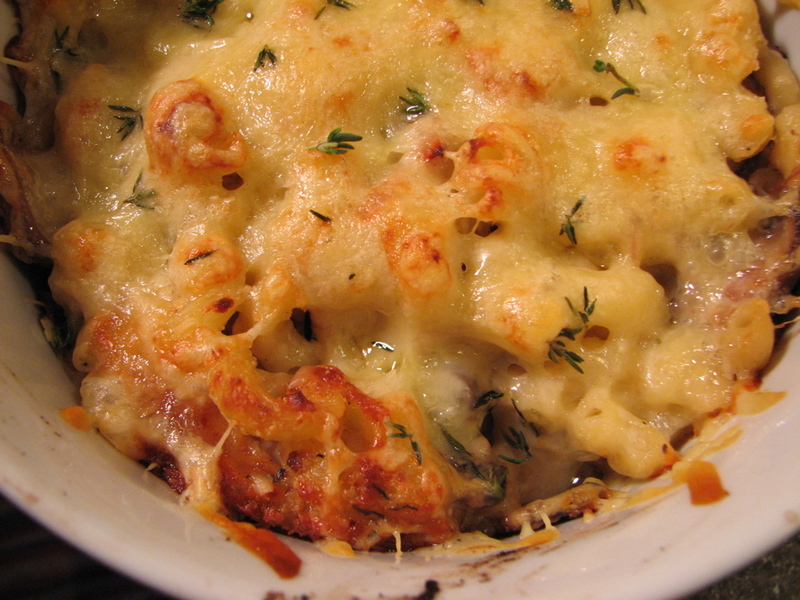