This recipe loses the cream altogether, replacing it with white wine. 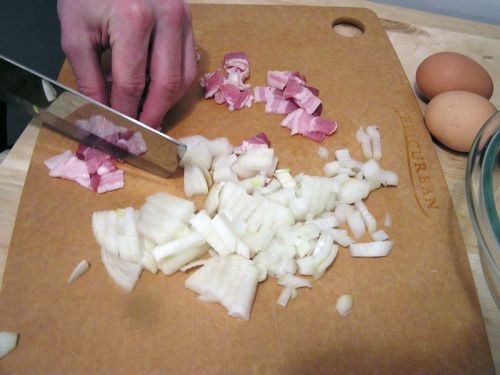 Get a huge pot of salted water boiling right away--you can always turn it off if it boils before you need it.  Measure out the wine you need and put the bottle back in the fridge so it's cold when you eat. Dice the onion and chop the bacon into small pieces.  Pour the oil into a skillet, turn it up to medium-high, and sauté the onion and bacon for about five or eight minutes.  In the meantime start the rest of the chopping business.  Just make sure the bacon doesn't get crispy.

Take hold of the parsley and just rip off a good handful.  Don't spend time meticulously picking each leaf off like I used to do--the stems aren't going to hurt you.  Just pull out some of the bigger steams and chop the mess up.  It'll all be good.  Grate about a cup of cheese, which you can either be careful with a real-deal measuring cup or just by giving it the old eye measure.   Next, separate the egg yolks. If that sounds like scary business, try this Egg Separation Technique 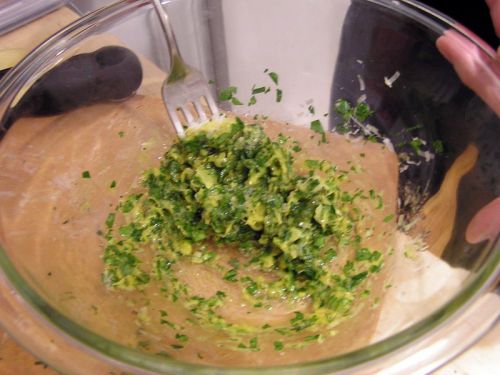 Place the egg yolks, chopped parsley, and the grated cheese in a bowl that you'll use to serve the pasta.  Stir until it forms a nice looking paste. 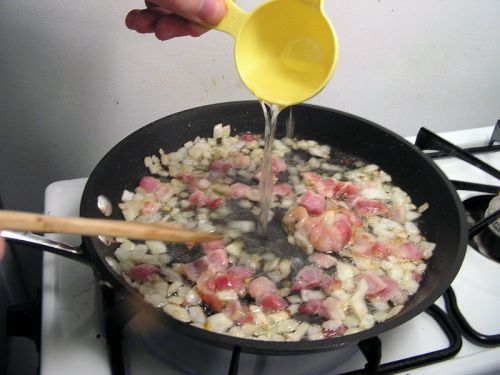 By now the onion and bacon goodness has been cooked.  Add the wine and crank the heat up--deglazing the pan.  It will bubble and smell fantastic.  Let it go until you think the bacon looks about to your doneness and some of the liquid has evaporated.  Then just turn off the heat and let the pan cool .  Probably about ten minutes. If the hot onion, bacon, and wine mixture is placed in the bowl with the egg yolks too soon, it will cook the egg and melt the cheese, rendering the sauce stringy.

Anyway, the water is boiling and how long will the pasta take?  About ten minutes.  How convenient. 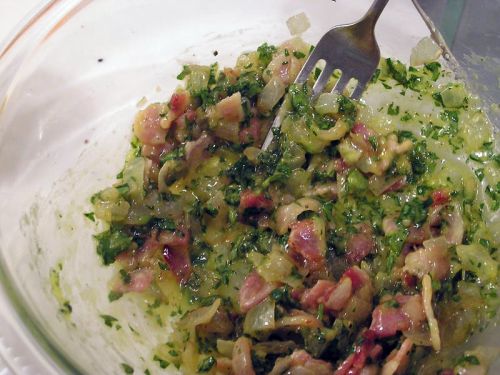 Just before the pasta is ready to strain, mix the onion, bacon, and wine mixture with the egg, parsley and cheese.  Whisk it up with a fork.

When the pasta is al dente (cooked but not mushy), strain it in a colander, reserving a cupful of the cooking liquid.  The easiest way to do this is to just dip a measuring cup into the water as it sits on the stove.  The stupidest way is to put a large bowl in the sink and dump all the water into it.  Then you'll have to somehow dump the steaming hot bowl so you can strain all the water.  In which time you'll get the pot holders wet, burn your face from the steam, and generally cause a mess.  Anyway, this didn't happen to us.

You'll have to work quickly since the only thing to keep the food warm is the heat from the pasta.  Dump it into the bowl with the rest of the ingredients and toss it like a salad until the pieces are coated.  If the resulting dish looks a little dry, like the pieces don't have a sauce on them, then pour a little of the pasta water into the bowl to give it a creamier texture.  The pasta should look coated.  Season with salt and pepper and grate some more Parmesan over it.  Pour the rest of that bottle of wine.  Enjoy.