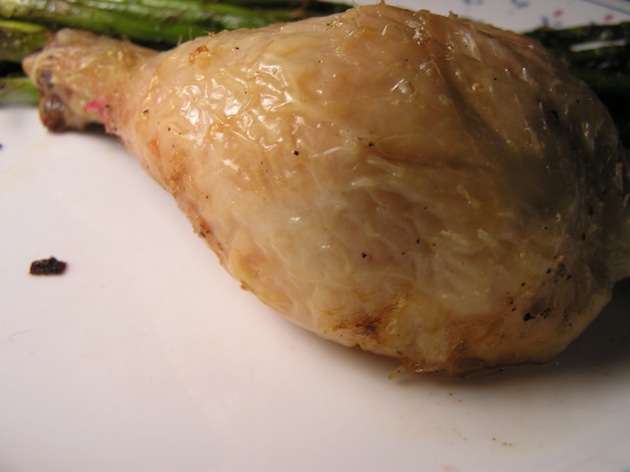 I realize now things have gotten out of control.  What started as a simple pursuit to find the ultimate method to roast a chicken has taken up way too much of my time.  I like to roast a chicken at least once a week.  But this is less a ritual than a weekly torture session.  Rather than repeat the same well-worn recipe that has been time-tested and approved, I try something new every single time.  I usually sit there with my poultry carcass and admire certain qualities of the technique du jour while damning the rest of it as a failure.

The self-deprecation comes at a price, but it is not without warrant.  A perfect roasting technique using a whole bird is is almost an oxymoron.  Dark meat cooks slower than white meat, and so no matter what school of thought you subscribe to, roasting a whole chicken requires some kind of compromise.  There are things you can do to the chicken before it enters the oven, like salting, brining, stuffing with herbs, onions, or other veggies.  But once it enters the oven you have to chose your method, and that will rear its ugly head in endless debate.  You can cook it at a straight 375-425, and come out with a fairly good bird.  But some say purely high heat is the way to go, around 500.  Some want only low heat for a long time, around 250 for around 3 hours.  While others want a combination of all of the above.

We've roasted many , many , many , many chickens.  And this is not the perfect one.  It's just another sad tale in the quest for the unattainable goal.  But it is a worthy candidate, if only for the juicy white meat it leaves behind.

This recipe was inspired by a few places.  First was a message a while back in Chowhound about slow-roasted chicken, which I've stored in the back of my brain for a while waiting to use.  And the other was a book called In Search of Perfection by Heston Blumenthal , chef of the world renowned Fat Duck outside of London.  The latter recipe might be the most ridiculous recipe I'd ever read.  He blasted it with heat at first, and then used extremely low temperatures for many hours.  Unfortunately, my oven couldn't reach that low so I had to adapt.

This recipe starts it moderately high, cools it down for an hour, and then blasts it with heat at the end.  It takes some time.  While most roast chickens are finished in an hour, this takes over two.  What you gain is juiciness.  Nothing is dry, and by the end your plate will have pools of chicken juices, which, if you have the right side items, could be a blessing.  But what you lose is a little of the succulence.  Juiciness is not the same thing as roasted flavor, and some of the white meat was particularly lacking in depth.  Thus is the tricky game you play when roasting a chicken.  And it's why I keep coming back to it.

This is a bare bones recipe, one that I suggest you jazz up a little bit with herbs, a lemon, or some kind of spice rub.  Also, a side note.  I didn't use as nice a chicken as I normally try to.  Fairway was having a sale on kosher chickens, which I realize now is a mistake.  I'm not sure if anything was done to the chicken, or if it was just cheap because it was a poorly kept chicken.  Anyway, next time I'd just pay a little more for a decent bird. 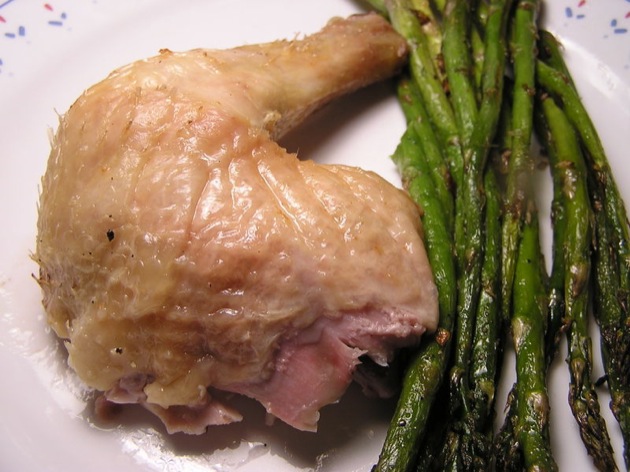