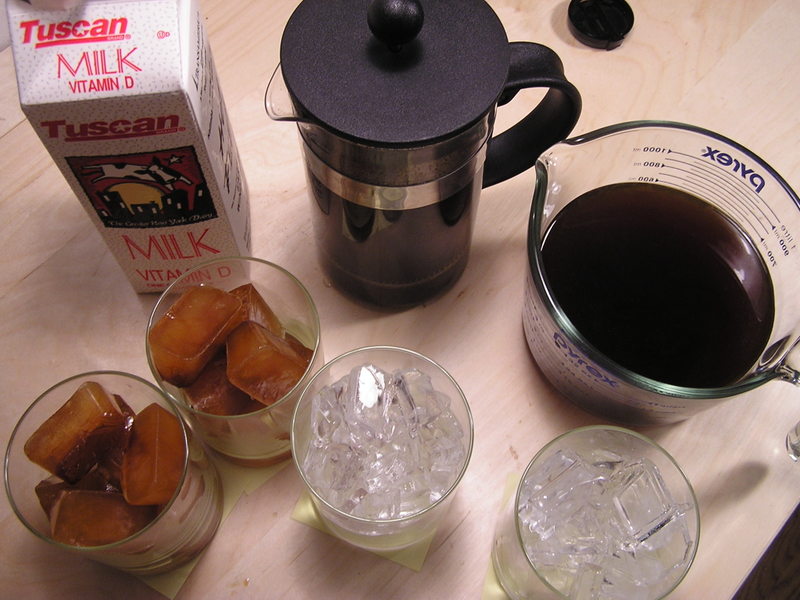 When I started sweating heavily during my morning walk to the subway and began considering a set of "commute clothes," which I imagined would be composed of a pair of running shorts and a tanktop, I figured it was time to stop trying to drink a steaming hot cup of coffee on the way to work.  There is simply nothing more miserable than thick New York humidity, being full of sweat, descending onto the stuffy subway platform, getting chills in the icy air of the subway car, being jammed in with a thousand people (who all try to find somewhere they can look without making eye contact), back into the swelter, into the over-compensating office A/C--in short, there is nothing worse than a hot commute. These things can't be changed.  There are ways, however, that they can be helped.  Iced coffee is one of them; at the very least, it can help you to maintain a reasonable body temperature.  But how can we deliver this scoffed-at caffeinated beverage out of the break rooms across this fair city and into the cups of serious coffee drinkers?  By taking the same pains to find the right way to brew a cup.  On the recommendation of a friend who claimed he'd discovered the secret to the perfect version, we tested four combinations to figure out the best way. 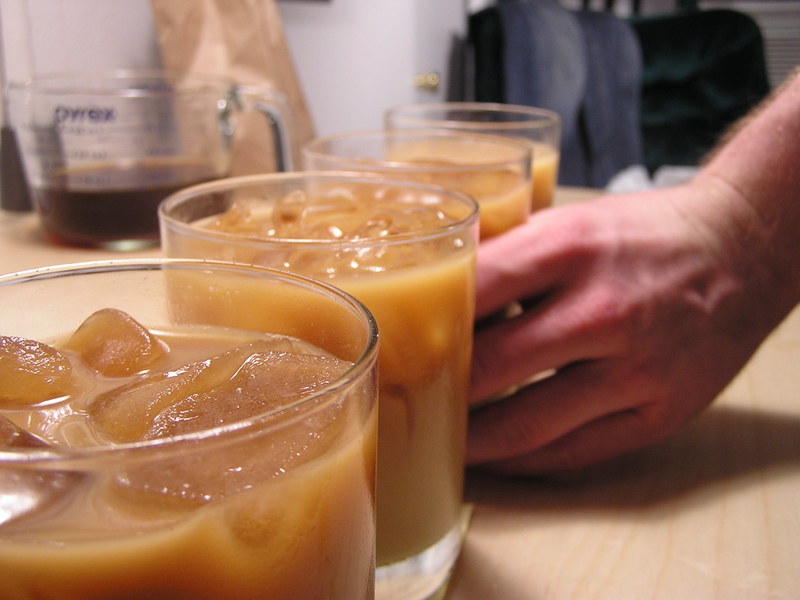 Getting coffee cold is not quite as simple as it sounds.  Just dumping hot coffee over ice tends to melt the cubes before it is thoroughly cold, leaving you with lukewarm, watered-down coffee. We decided to try two different methods picked up from message boards and from friends.  The first was to make stronger coffee, which could be diluted by the water and still have enough strength.  We did this by using the "Austin Method," which he perfected in his apartment in Philadelphia.  He'd make a french press of coffee and let it sit around for 8 hours steeping in the grinds.  This creates a concentrate and it also cools it down so when it is poured over ice it doesn't melt everything in its path.  We were suspicious, however, of possible bitterness from the long steep. The second idea was to mess with the ice.  If the ice diluted the coffee what would happen if you made the ice out of coffee?  Then if the hot coffee melted the ice, it wouldn't become diluted.  It's as simple as pouring coffee into an ice tray and letting it freeze.  It takes about four hours. We decided to mix and match with these two ideas, and ended up with four different cups of iced coffee which we blind tested in two batches We put around 1/3 of milk in each batch, as it's reasonably accepted that iced coffee comes standard with milk.  It was about 1 part milk to 4 parts coffee. With these possibilies in mind, we made the following four combinations: 1) Freshly brewed (hot) coffee, poured over regular ice. 2) Freshly brewed (hot) coffee, poured over "coffee ice." 3) Made-the-night-before coffee poured over regular ice. 4) Made-the-night-before coffee poured over "coffee ice." 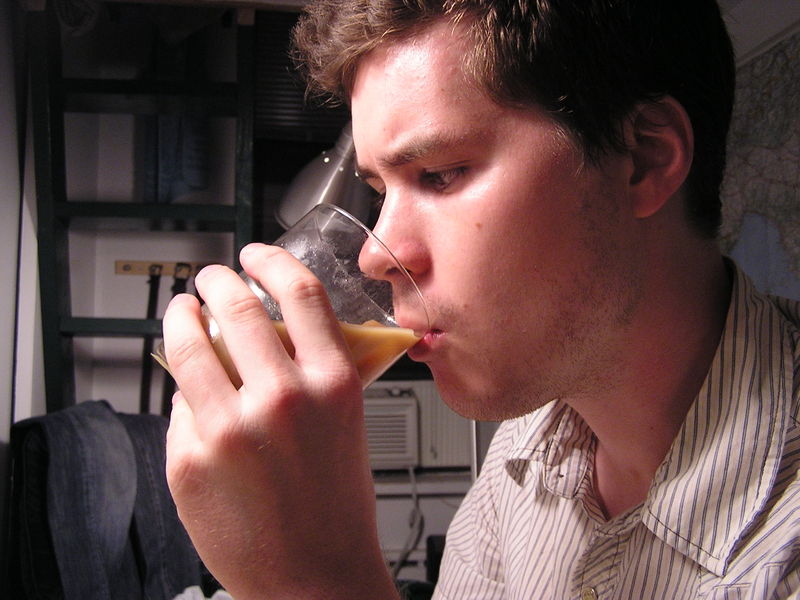 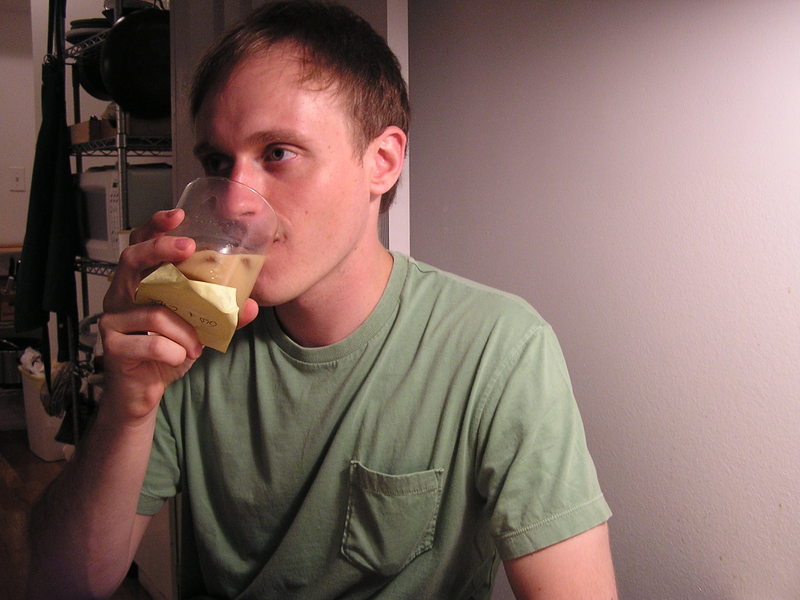 The results were very surprising.  Here are the contendors, in order of preference: First prize: Made-the-night-before coffee poured over "coffee ice." 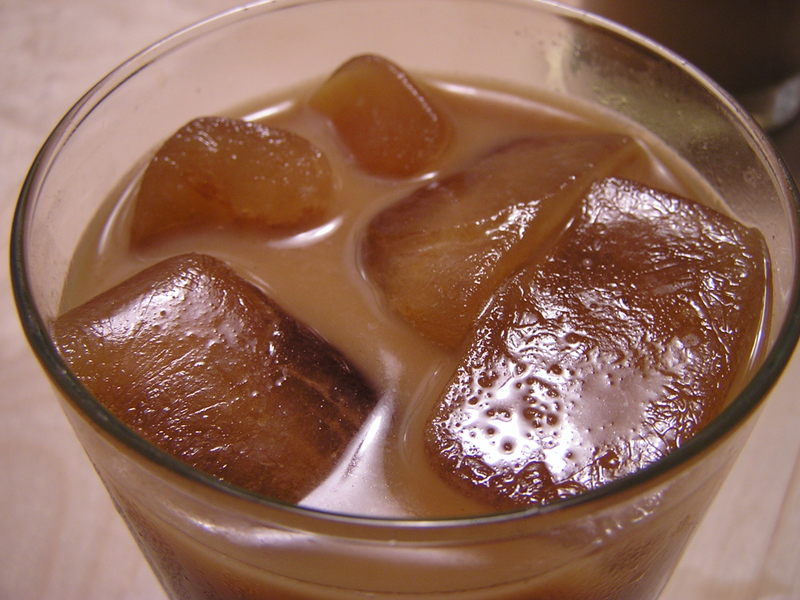 Prepartion Time: 8 hours This is, of course, the most intensive-to-make version: it requires a reasonable amount of forethought (not always our strongest quality).  But it's just so tasty.  Robust, earthy, full-flavored, smooth, and even chocolatey.  Surprisingly, no stale taste whatsoever.  A real treat.  And when you think about it, just make a large batch of coffee the night before, pour a little out into a cube tray, and let the rest sit there until morning.  This is a for-serious iced coffee worth mulling over. Second Prize: Freshly brewed (hot) coffee, poured over regular ice. Preparation Time: 5 minutes Now, this doesn't make any sense.  This should be the most watery and lukewarm.  But it was the most refreshing of the bunch.  It seems that freshly brewed coffee is important in this instance.  We found it bright, refreshing, simple, not bitter, clean-tasting.  For everyday iced coffee, this really is the easiest preparation. Third Prize: Made-the-night-before coffee poured over regular ice. Preparation Time: 4 hours Not a bad cup of iced coffee at all, but definitely not as tasty as the second prize cup.  It had a darker flavor, slightly more bitter, probably a result of the coffee steeping in the grinds for so long.  It didn't taste less watery, which dispelled somewhat the myth that you need the old coffee that's been chilled. Fourth Prize: Freshly brewed (hot) coffee, poured over "coffee ice." Preparation Time: 4 hours The most disappointing of the bunch.  It had a bitter/bad finish, though it was very robust.  It tasted the most acidic and unpleasant, which isn't what you're looking for in the morning.  Something about the older "coffee ice" combined with the hot fresh coffee that didn't jive correctly. So, there you have it.  If you have any experience solving this important question, please let us know.  Anyone have any ideas using espresso?  Seems like that could yield some wonderful combinations, but we don't have a machine. New York Magazine also has a run-down of New York options .