These are books not necessarily published in 2007, but discovered in the last year. 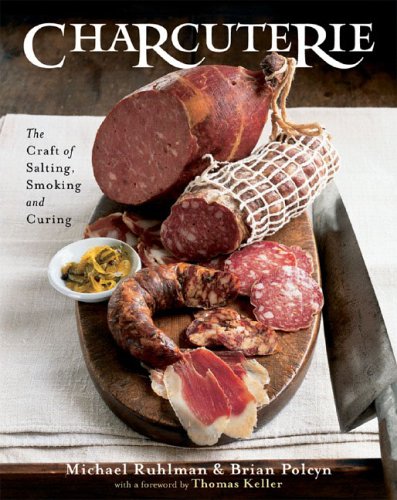 Of any other food book I read this year, this one was the most pragmatically enabling: there was no excuse for not participating in the great culinary art of charcuterie.  It wasn't enough to admire those who make salami, or cold-smoke their own salmon. Part of it is the tone that
the authors take: it's not a book that rewards a casual flip through,
then put away on a shelf.  The instructions are short, matter-of-fact,
firm, encouraging.  This is not for marveling at; this is for doing.  Actually going to the butcher and buy a pork belly for homemade bacon. Take a duck breast and make a "prosciutto" out of it (which I obediently did).  Just today I received a package of my first bag of Instacure #1, a.k.a. pink salt, which is sure to appear in future charcuterie adventures on this site (I also recently acquired a meat grinder: I'm giddy). 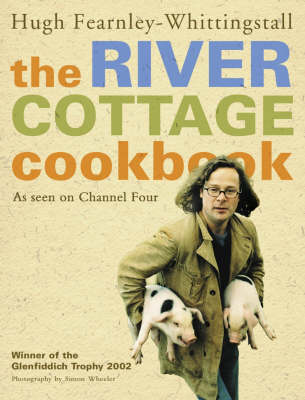 Hugh has been getting some attention lately, and rightfully so: he is a real food revolutionary.  When I discovered the River Cottage Television
Series this year, I couldn't stop.  A number of years ago the man left London and leased four acres of land and a little cottage, where he
started growing vegetables, raising some pigs, and learning about the
land, all with camera in tow.  Since then chickens, cows, and lambs
were added, and the cottage was traded for a farm ten times the size,
and from there more property was bought to create a restaurant and
educational center in a smattering of old stone buildings on a dairy
farm.  He forages for mushrooms, challenges locals to pancake-flipping
contests, shows you how to drain the ink from a cuttlefish, and how to
take an entire pig and cut it down into ham, salami, headcheese, and
blood sausage. At the same time Hugh is a devoted food activist for organic methods and proper treatment of animals, he is also a devoted glutton.  In fact, one often wonders whether all that good will about living off the fat of the land and treating animals well is less about
the moral high ground, and more about unbounded pursuit for deliciousness and pleasure.  He gets it both ways: he's right, and he's having fun.  He's also funny, never judgmental, and an inspired cook.  This book covers growing chili peppers to delivering a lamb at birth: nothing I need to know, really.  Not yet. 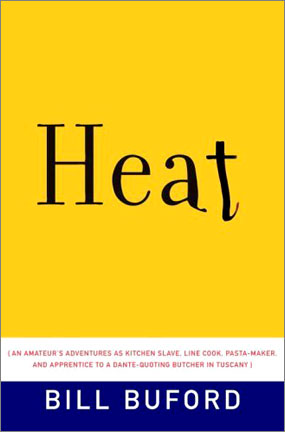 Heat - Bill Buford
I thought I had already "read" this book after I'd seen the handful of New Yorker articles that Bill Buford has written, which make up a few chapters of this book.  I thought I had the jist of it, so no need to read the book itself.  But I was dead wrong.  This is the most stirring, passionate story about discovering food and its pleasures of each that I've ever read.  It's the work of an absolute obsessive.  It makes me want to quit my job and work in a restaurant, and then ten minutes later it makes me never want to think about doing that.  Buford will spend months of his life preoccupied with the origins of egg yolk in pasta, breathing the dusty stacks of the New York Public Library and traveling around Italy to find out.  He describes with perfect detail the adrenaline of a kitchen during full dinner service, and makes it sound like a soundless, slow-motion ballet.  He tells you how to perfectly cook Linguine with Clams, the way it is prepared in the Babbo kitchen, not with a recipe of any exactness, but by putting you in his shoes, on the pasta line, with pinches of this and that and heat enough to make you sweat.  It was very difficult to read this book and resist the urge to run into the kitchen and cook something. 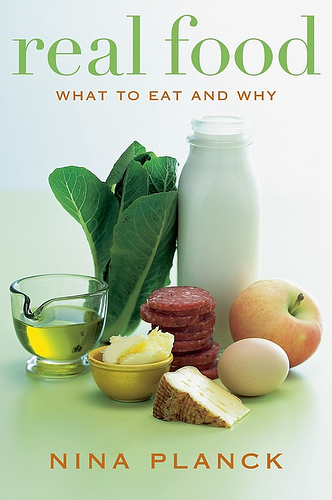 Right now I’m barreling through Michael Pollan’s new book In Defense Of Food , his follow up to Omnivores Dilemma .  Unlike that last book, most of my time is spent nodding my head in agreement rather than shaking it in astonishment (do you remember the first time you read the corn chapter in Omnivores Dilemma?  Crazy!).  Maybe it is hard to compare works, especially to one that I haven’t even completely finished.  I just have the nagging sense that I’ve read this book before.  That’s because I read Nina Planck’s Real Food , the first book that really, truly made me question what I was eating.  She helped run greenmarkets in London and New York (including the Union Square Greenmarket) and was a devoted vegetarian before realizing it wasn't the healthiest way to live.  I had been intrigued by cookbooks before, but never had I unabashedly talked about the health of ingesting animal fats, whole milk, and, of course, all those veggies.  I think it's a little less preachy than Pollan's new book, and a little more enthusiastic.  All of the healthful recommendations are qualified with ravings about how great it will taste before she describes what they'll do for your body.  That's something I can get behind. 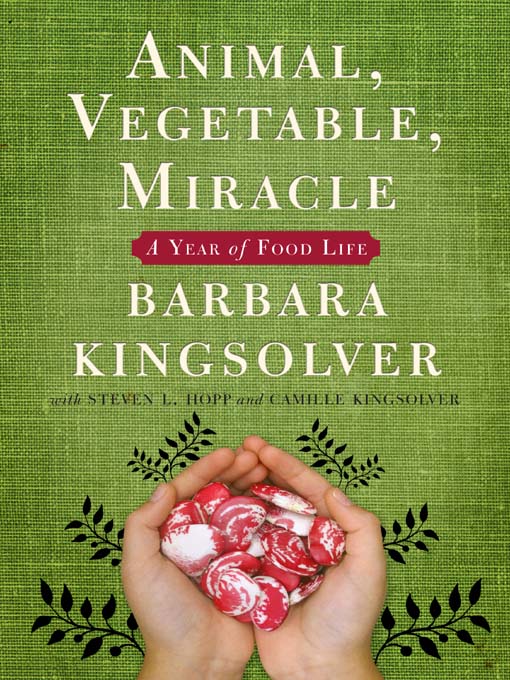 I really didn’t want to read this book.  It just looked like another memoir about eating locally that would make me feel all warm inside wouldn’t having enough detail to be practical.  Abby kept pestering me to give it a shot, that there was actually much to learn.  So I was incredibly surprised how much I fell for the book, how much actually learned.  As much as I considered myself a foodie, I never really understood what was happening at the farm.  And that has really changed everything.  I refer back to the vegetable chart at the beginning of the book, which somehow magically encompasses all vegetables grown, on a monthly basis, to see where I am in the seasonal chart.  Combine this with my infatuation with the River Cottage, and I’ve suddenly found myself willing to pay more for local ingredients, and really care about who I’m buying food from.  It's interesting that  I didn't get into Farmer's markets until I moved to Ohio, which has far fewer than New York City. 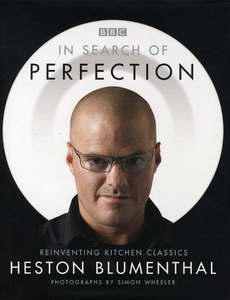 In Search of Perfection - Heston Blumenthal

I touched on this earlier this week , but if it weren’t for this book Slow Posts might never have been written.  There are books with recipes, and then there is this, where every single detail is etched out in exhausting length.  I don’t think I’ve ever made one of his recipes completely, but I’ve come close.  And I’ve learned so much about the process cooking, how flavor is delivered, and how to look at something so simple in such grand terms.  His direction can get exhausting, and there are only 10 or so recipes in this whole freaking work, but it is ingenious and worth exploring.  I mean, if all I got out of it was Broil Your Pies: Pizza Hack , it would be worth the list price.