A Gastrique Primer, or How to Improve Your Next Tomato Sauce

Vinegar and sugar can spruce up any sauce. 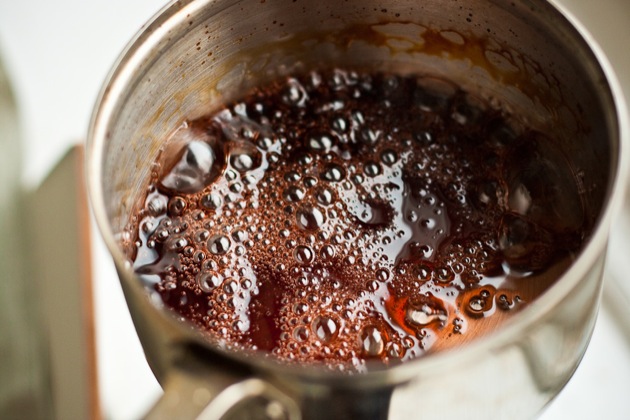 Once we had blanched and peeled the tomatoes we chopped them, strained the seeds, and simmered it for twenty minutes into a simple sauce. Then I made my gastrique , which involved no measuring -- maybe 1/4 cup of vinegar and 3 tablespoons of sugar -- and a quick boil into something thick and syrupy.

I tasted the sauce before adding it, which was fine, clean and simple.  And then I tasted it after. The difference was noticeable. Both of the most prized qualities of a good tomato -- sweetness and acidity -- were suddenly brought to the forefront. The sauce went from just fine to something special. It was amazing.

I've toyed with the idea of culinary school for awhile, but never took the leap. I love to cook at home, but I also crave a rigorous, repetitious environment where I build my skills and in the process pay full respect to the craft of cooking. A home cook is one thing, a restaurant chef is another.  I've never worked in a restaurant, and have no idea if that sort of life would suit me.  But I want to learn more.  That's why I recently started a night-time culinary school program here in Chicago at Kendall College. It's a year, and only at night, so my life doesn't have to go on hold while I explore.  I really don't know where it'd going to take me, but I'm beyond excited. Here goes!

On the blog I'm hoping to report on some interesting things I've learned. My focus is not comprehensive.  I'm interested in little tips and bits of technique that I pick up along the way.  The things that separate good cooking from great. I've always thought that cooking well is little things adding up; if you care about each step and pay attention to detail, the food will have to be good.  That's just science.  And, well, maybe it's also nice to have some tricks up your sleeve.

Which brings me back to the gastrique . The technique at hand, which chef explained briefly during a demonstration for making a simple tomato sauce, is a perfect example. Somehow in five years of writing and researching, I never encountered gastrique. But I'm sort of smitten with it now. 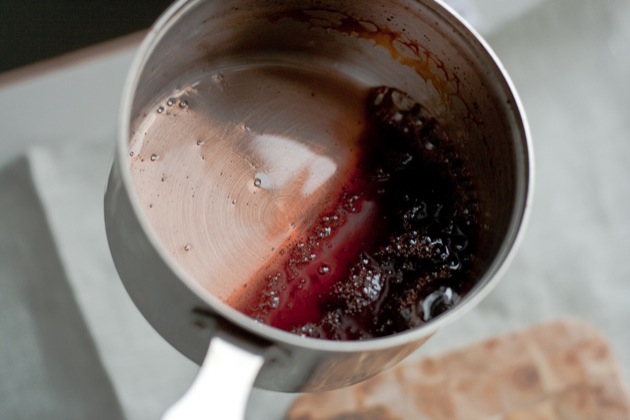 The way it was demonstrated to us (informally, as it wasn't part of the normal recipe) was simple: red wine vinegar in a small saucepan, handful of sugar, then the whole thing boiled down until syrupy and viscous. It took just three or four short minutes. The result was drizzled into a simple tomato sauce, and chef suggested we do the same.

The sauce, which we were making in the dead of winter, was made with fresh tomatoes. To amp up the flavor which winter tomatoes lack in comparison to how they taste in the summer, we used a little tomato paste while sweating shallots and garlic. This helped somewhat. But tomato paste doesn't bring any brightness. Its flavor is deep and rich, but also a bit muddy.

A gastrique is good for lots of other things, too. Traditionally it's used to season sauces for meat, adding punch and depth. Or, it can become a simple sauce on its own, in which case it often has a bit of fruit which softens and gets glazed with the reduced syrup. You often see it employed with duck breast. Anywhere a sweetness and acidity are useful, a gastrique can only help.

In fact, there's a new use for gatriques that has come out of the cocktail vanguard. Rather than just a simple syrup (sugar + water), the complexity of a gastrique is a way for bartenders to play with new flavors.

If it were the middle of summer, I wouldn't bother. But next time you make a tomato sauce, give this a try.  It might be that little something to make it shine.

The proportions don't seem to be exact -- Larousse Gastronomique doesn't bother with a recipe, just calling it a reduction of sugar and vinegar. I think that 1/2 cup vinegar and 2 or 3 tablespoons of sugar is a good place to start.

All you need to do is combine them and boil the sauce down until much of the moisture is gone, and the viscosity of the mixture starts to increase. Eventually you'll start to see bubbles getting bigger and stickier, as in the photo above. It shouldn't be as thick as honey, more like a syrup. 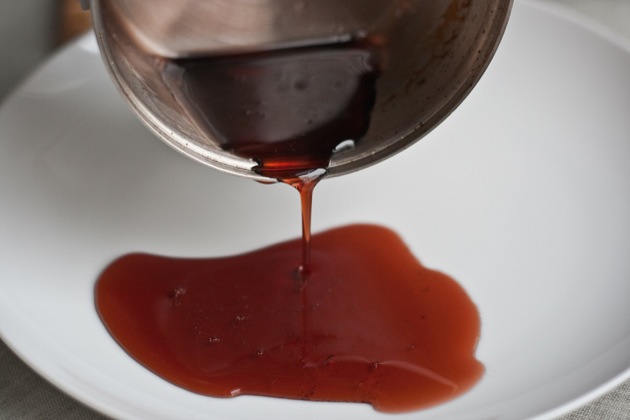