A Story About Eggy Bread

What if French toast could be improved by the Brits?

Eggy bread, a slice of white loaf dipped in egg whisked with milk and fried in butter, is simply French toast without the sweetness.  It is a food I've consumed in countless American diners, and on countless Sunday mornings as a kid.  But that morning I found eggy bread unrecognizable without its sheen of maple syrup and its fragrant nutmeg and cinnamon spices.  Still, there it was, plain and obvious.  And it floored me.  A savory French toast.  (A British toast?)  Something deliciously simple, seasoned with just salt and pepper.

I proceeded to make my own that morning, and then again.  And it has since become a very fond breakfast of mine, ready in minutes and a little something out of the ordinary compared to normal cereal fare.  For some reason, making French toast seems like a laborious affair for lazy Sunday mornings--but eggy bread is as simple as dropping an egg into a bowl, whisking it with a splash of milk, soaking the bread while the pan heats and the butter melts, and frying it until crisp .  Easily completed half-asleep before heading to work. 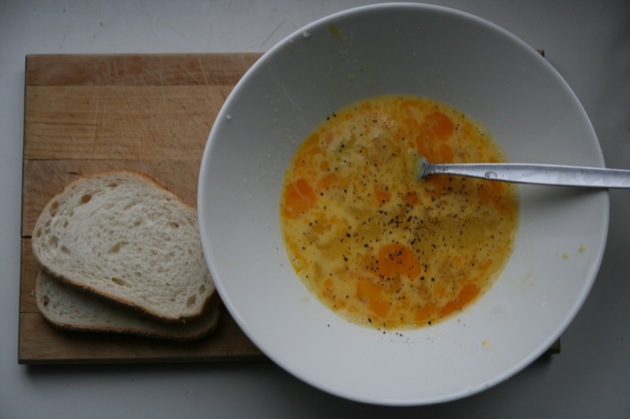 A quick breakfast that's genuinely good is hard to find, especially a variety of ideas to keep life interesting.  And so Eggy Bread has entered my repertoire.  And if you're so inclined, it might be a good one for yours as well (that is, if you happen to be as ignorant of Eggy Bread as I was, which, judging from the Google results , may not be the case).

And if you have any other genius quick breakfast ideas, please do share them in the comments.