Make your bacon at home.

The bacon most of us know it is made from pork belly, but there are also variations made from other cuts, notably the cheeks and jowl, which makes guanciale --a porkier tasting, fattier cut that's a staple in properly-made Spaghetti alla Carbonara and Bucatinia alla Amatraciana . Hog jowls are difficult to find, though, especially because a butcher would probably need to order an entire head in order to get them for you--and unless you're willing to buy the whole thing and make head cheese , that might be a tough one (you can also try buying them online). Making guanciale also requires a period of hanging and drying--the most difficult part of urban meat curing, I'm finding.  Hanging requires temperature and humidity control, which are possible but difficult without space.  I need that closet for my coats, thank you very much.

So I chose the belly.  A number of different things can be done with the belly, however, to arrive at bacon.  You always start one way:  coating the pork in salt and spices, allowing it to draw out moisture for a week or so, after which you're left with a slab of what's sometimes called "fresh" bacon. From there, the belly could be hot-smoked to create American-style bacon, or, as an alternative to that, slow-roasted in the oven to mimic smoking.  Or, it could be rolled tightly and tied, then hung and dried to make pancetta. 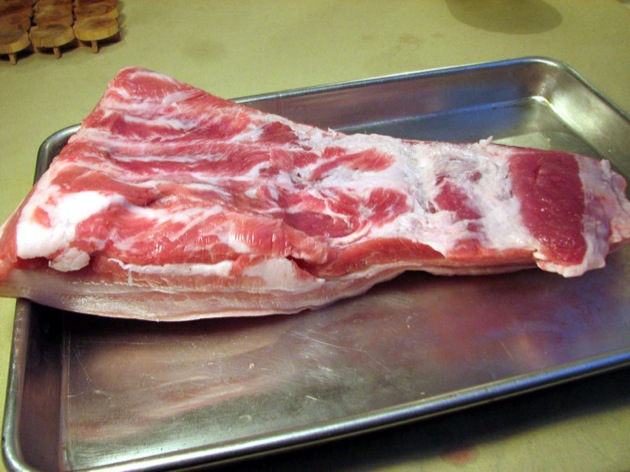 You can also stop right there with the "fresh bacon" out of the fridge-cure and use it as-is, rinsed of its salt and spices, sliced into strips or chunks, and cooked as you would use American bacon.  According to Paul Bertolli in Cooking by Hand , the Italians call this Tesa , meaning "extended," which refers to its long length and the fact that it's cured flat.  This seemed to be the fastest, simplest solution to having usable bacon--just over a week of curing time and it would be ready to use.  I started this way, with the option of roasting or smoking it later on, depending on if, in fact, I could locate a smoker or concoct one in mid-Winter.

I mixed up the cure first using the indispensable Charcuterie as a guide, as well as Bertolli's [ Cooking by Hand ](http://www.amazon.com/Cooking-Hand-Paul-Bertolli/dp/0609608932) .  Bertolli's recipe called for many spices, and I used all of them, scaling the recipe from a 12 pound full belly to 3.4.  Peppercorns, cloves, allspice berries, nutmeg, red pepper flakes, and juniper berries were ground up together, then mixed with salt and pink salt (pink salt is nitrites, which, though there are different schools of thought here, is essentially an additional curing ingredient that prevents against botulism and helps the meat maintain a pink hue--read all about it in Charcuterie ).  I rubbed my dry  mixture all over the belly, then chopped garlic and red wine to be sprinkled on top. 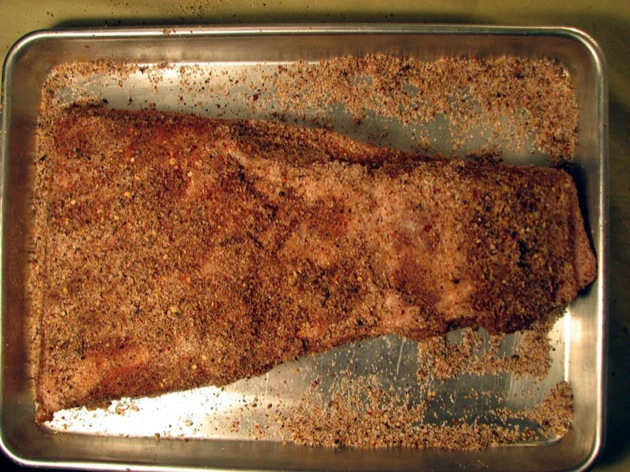 Into a freezer bag it went, to cure for 8-15 days, depending on the belly's thickness (mine was from a lovely heritage hog, so it was nice and thick).  It's done curing when the salt has penetrated to the center of the belly and it's no longer squishy.  You flip it over every other day to make sure the resulting liquid which leaves the meat is distributed evenly and all parts get a roughly equal cure time.

In the meantime, I started researching what I would do with the belly once out of the cure.  I ruled out pancetta because I had a very small amount of belly that wouldn't really roll up well.  I knew I wanted to keep some of the bacon fresh.  But I also wanted to try to smoke it.

I woke up that Saturday morning and plopped on the couch with a cup of Yorkshire tea, half groggy, to tune into Jamie Oliver's fantastic new show on the Food Network.  After making a roasted pepper dish as well as a goulash of some kind, he started talking about a dish with a chili salsa and hot-smoked salmon.  I heard the word "smoked" and perked up: then I watched as he proceeded to create a stovetop smoker out of a cookie tin, some chicken wire, and the sawdust-like wood shaving for rabbit cages.  Perfect.

The cookie tin I had; the chicken wire wasn't hard to find; but the wood shavings were problematic.  I ended up buying some regular woodchips that are designed for smoking meat in a grill among coals,
thinking maybe I could chop them up into smaller, usable pieces.  This didn't really go as planned--and by "not really" I mean "not at all"--so I resigned myself to just using whole pieces and seeing how it went. 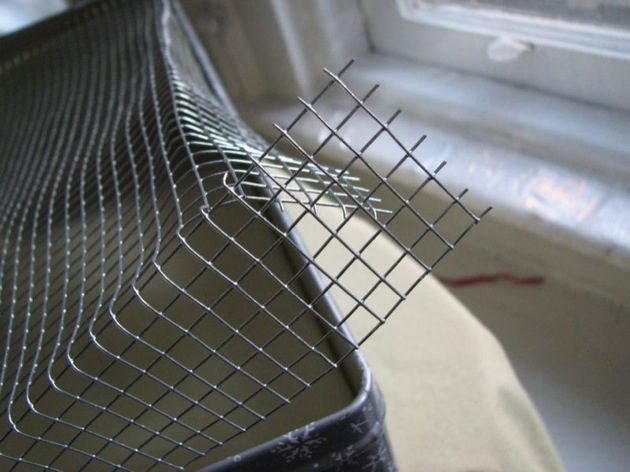 Building the smoker wasn't difficult--just snipping the chicken wire to the appropriate width and length, making extra slits in each corner to fold over one side.

Once the smoker was built, I removed my belly, which I had checked the day before and decided was ready.  It got a good rinse and a very good dry.  Then, I cut off about a pound and a half of it to test out my smoker. 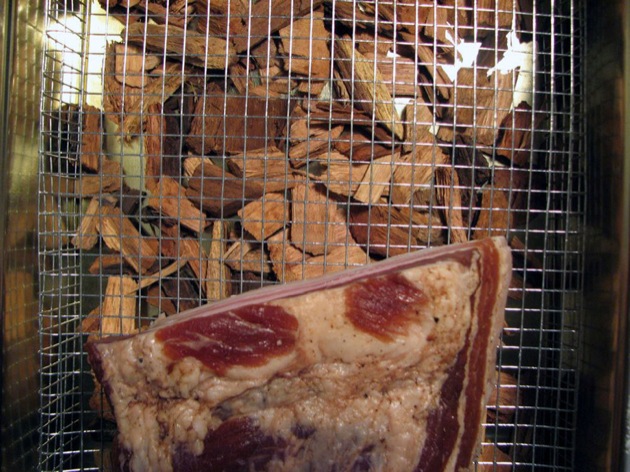 I filled the smoker with a handful of wood chips, then punched a little hole in the top, which allowed me to stick the thermometer directly into the meat and monitor its progress, then I put the top on and put a wet rag around the hole.

Then I placed it across two burners and turned on the flame.

At first, the metal popped and groaned as it reshaped itself under the sudden temperature change.  Then slowly, I began to smell smoke, and it began to pour out the sides of my cheap cookie tin.  I lowered the heat, then set about trying to cover any smoke leaks with more wet rags.  My kitchen started smelling like a campfire.

In fact, it wasn't a very pleasant smell at all--rather acrid and charred.  Soon, despite the heat being low, too much smoke was pouring out.  I took it off the heat, worked the top off slowly, and had a look inside.  There were some charred chips, and the meat had gently cooked on the outside.  I flipped it over. 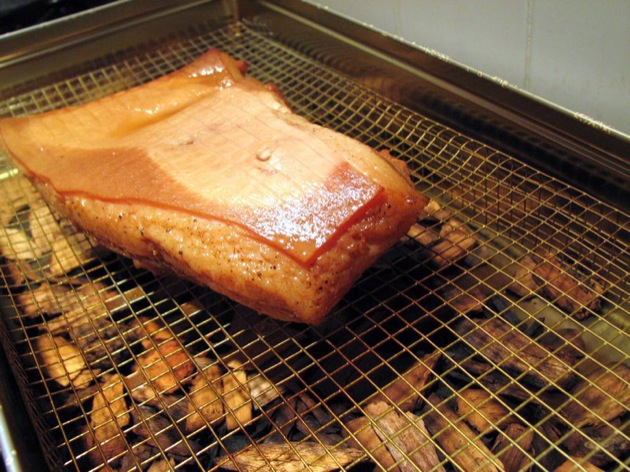 The skin-side of the belly had shrunk somewhat, and was quite hot. The temperature inside the meat, though, hadn't changed much, at least according to my thermometer.  Most importantly, the overall smell wasn't a pleasant woodsmoke, but more like charred campfire.  I was nervous that the belly was getting ruined by my amateur stovetop smoking.  Was I supposed to soak the chips in water first?

I decided to quit while I was ahead--and stick with one piece of fresh bacon and one piece of slightly smoked.

Here's what each piece--unsmoked and smoked--looked like side-by-side.  As you can see, the hot smoking softened the meat a little bit.

I cut a small strip of each, warmed up a skillet, and cooked them gently until they rendered their fat and just started to go crispy.

This was my first taste of homemade bacon--and like I already said, it was a revelation.  The recipe I used was a very savory cure, however, which is more suited to using the bacon for cooking with other ingredients, rather than tasting on its own or next to some eggs.  For that, you'd want a sweeter cure with some brown sugar, molasses or maple syrup in it. I've already put my bacon into some into a bolognese sauce that pretty much blew my socks off, and made my best Pasta Carbonara yet.  But nevertheless, the flavor may have been too strong in my cure.

It touches on one major lesson I've learned so far in beginner's charcuterie: use the simplest cure possible your first time around .  I went too complicated on my Duck Prosciutto , and then made the same mistake with this bacon. Too much seasoning obscures the delight of the cured meat itself, and
also makes the taste more difficult to distinguish.  Master the basics, then move one to other recipes.

Maybe in the warmer springtime, I'll cure another piece, and make one of those homemade smokers made out of a garbage can .  I'm pretty sure that stovetop smoking--especially janky, cookie-tin smoking--is not ideal for doing something for long periods of time--which the bacon requires.

But go pick up Ruhlman's [ Charcuterie ](http://www.amazon.com/Charcuterie-Craft-Salting-Smoking-Curing/dp/0393058298) and use his very simple bacon cure (the recipe is also adapted online at the NYTimes--but buy the book, it's worth having) to make a batch.  You know how ex-vegetarians call bacon the gateway meat ?  Bacon is also the gateway charcuterie.