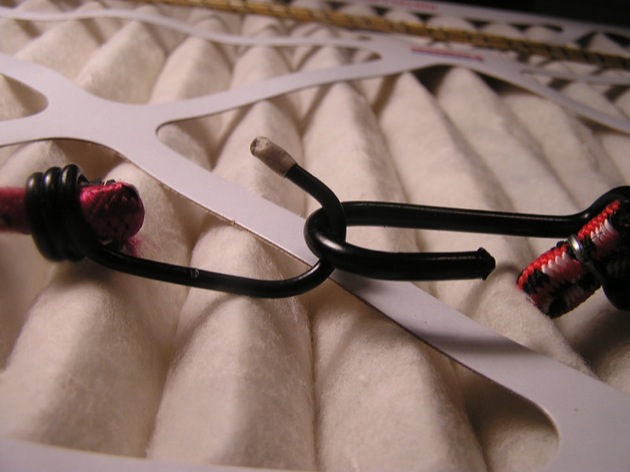 Sometimes you just have to start.  I have been wanting to make beef jerky for a while now, but had always stumbled on how I was to actually dry out the meat.  I don’t have a smoker, and it didn’t sound like any of the other methods were going to work.  But hey, I thought, cowboys did this; I can do this.  So I bought some lean beef, sliced it thinly, and coated it with some salt, onion powder, garlic powder, and chipotle peppers.  I stashed it in the fridge for its 24 hour cure and began reading.  I’d have that much time to think of something.

Michael Ruhlman, my mentor for all things cured , suggested I just place the beef strips into an oven at 90 degrees for 16 to 20 hours.  Where shall I begin?  First off, as I’ve explored before , my oven doesn’t go anywhere near that low.  There must be expensive ovens that can, but not mine.  I’m about 110 degrees off.  If I wanted to maintain that temperature I’d have to prop open the door, which might be a perfectly legitimate technique if I didn’t have to have the oven on for the better part of a day.  Even at its lowest setting the oven would waste enormous amounts of energy.  I’d also have to leave the oven on while I was away, something my mom told me never to do.

Which meant I needed another technique, and I needed it quickly.  Some people just cook the beef at 200 degrees for a few hours, but that just felt like a cop-out.  I wanted to make real jerky, otherwise I could just buy some at the store and stop fooling around trying to create my own.

Then I thought back to the oven technique.  When I last came across this problem I was making Heston Blumenthal’s Roast Chicken .  I solved it by busting out my seldom used crock-pot and setting it at the “Keep Warm”.  It worked.  If I propped open the lid to the pot I figured I’d be able to get something close to 90 degrees.  I could leave a crock pot on all day.  The only problem was air.  There isn’t much airflow in a crock-pot, and I worried that the meat wouldn’t get properly dried. 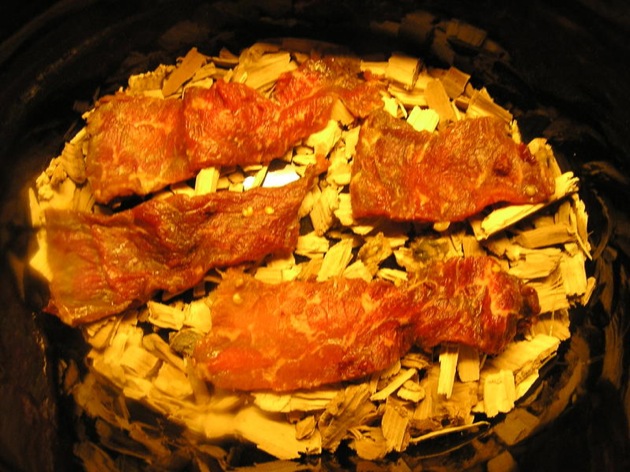 I toyed with buying some fans, but just decided to layer the meat amongst some smoking chips.  Hopefully the space between the wood would allow some airflow, and maybe it would even pick up some smokey flavor along the way.

I needed a backup plan, though, for as ingenious as the plan sounded, I had no idea if it would actually work.  After some more searching online I came across a technique from Alton Brown .  He lays the strips of beef between two large air filters, bungee cords them to a box fan, and turns the speed to medium.  No heat is required, just 8-12 hours of a fan blowing.  hmmm....

This sounded about as practical as his method for making fajitas by placing the meat directly on the coals .  It might work in theory, but fails in practice.  After reading a positive run in a blog, I decided to give it a go.  I journeyed to the local hardware store and picked up two air filters for about 5 bucks a piece.

I split up my salted meat between the two methods, set them up, and then went to bed.  I wouldn’t know anything until the morning.

The crock-pot didn’t work at all.  Like I had guessed, there wasn’t enough airflow, so some of the meat just cooked while other parts dried out, leaving the meat a hodgepodge of sludgy grey and dark brown.  It did not look appetizing.  I ate one piece and then began to feel a little sick.  I threw the rest away.  Perhaps a fan really would have helped.  But I’ll probably never try this again.

That is because the fan method works.  When I opened up the filters and peered at the meat it looked exactly like beef jerky.  Best part, they tasted like it, too.  The cure, which I got from Michael Ruhlman, was a little too spicy; I might try a sweeter cure next time.  But overall, it was incredibly easy and worked tremendously well. 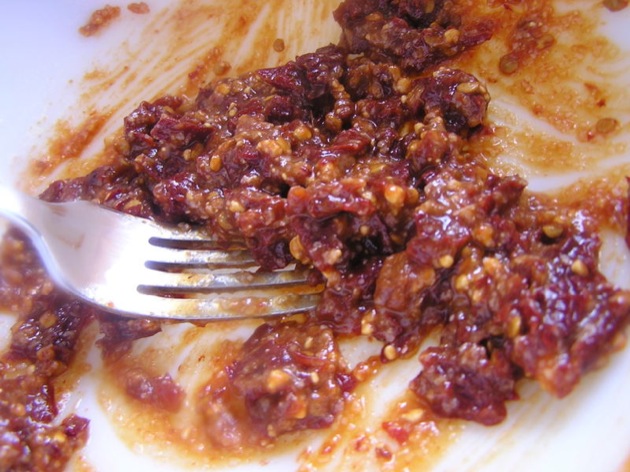 Trim the meat of any excess fat. 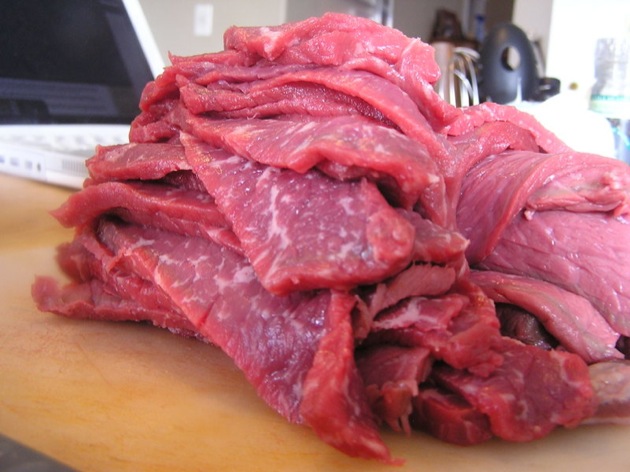 Slice the meat very thinly, about 1/8 inch thick.  Most people suggest cutting along the grain.  I did about half and half, because I didn't realize that until I was halfway done. 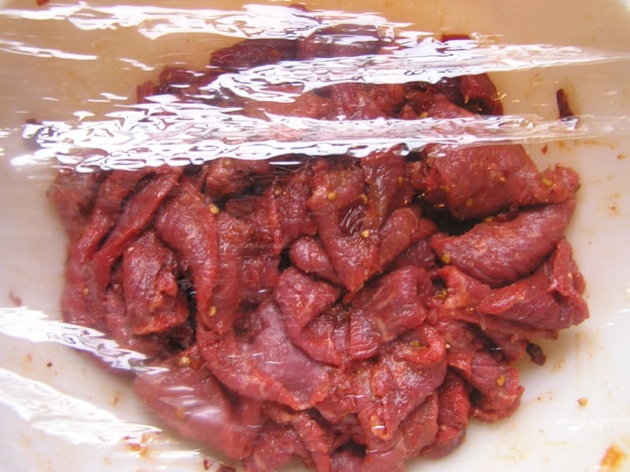 Toss the meat into a large bowl with the rest of the ingredients.  Thoroughly mix everything together.  Cover with plastic wrap and set in the fridge for 24 hours. 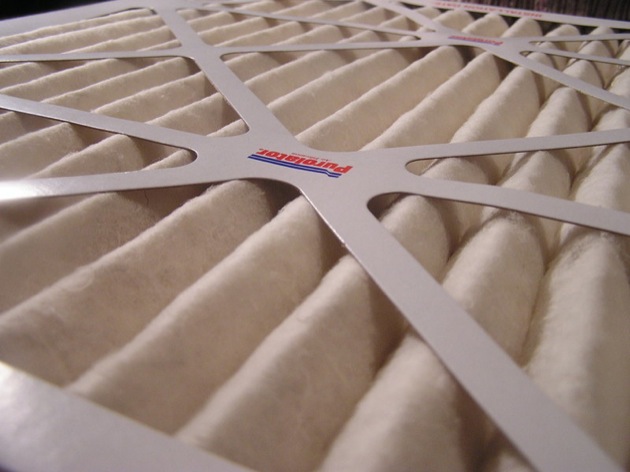 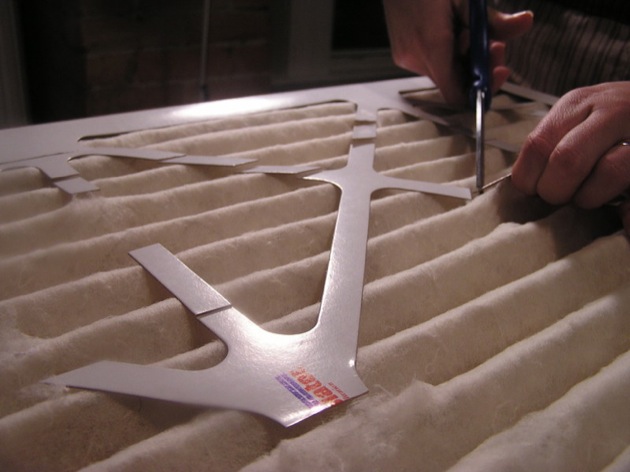 Depending on which air filters you buy, you might need to remove some of the cardboard on the air filter.  You want as much space as possible. 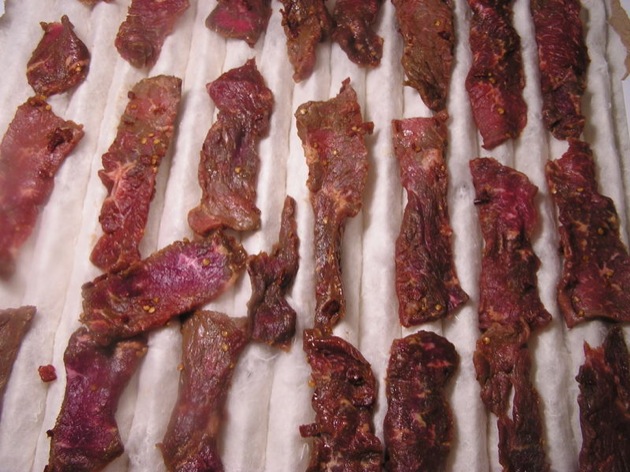 Lay the meat into the grooves of the filter.  Stack the other filter atop. 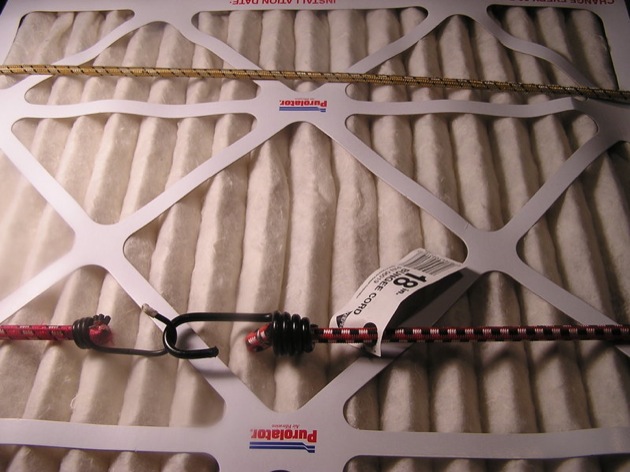 Set the box fan flat on the ground (air blowing direction pointing up), and then place the filters on top.  Wrap the bungee cords around the filters, just so they are secure. 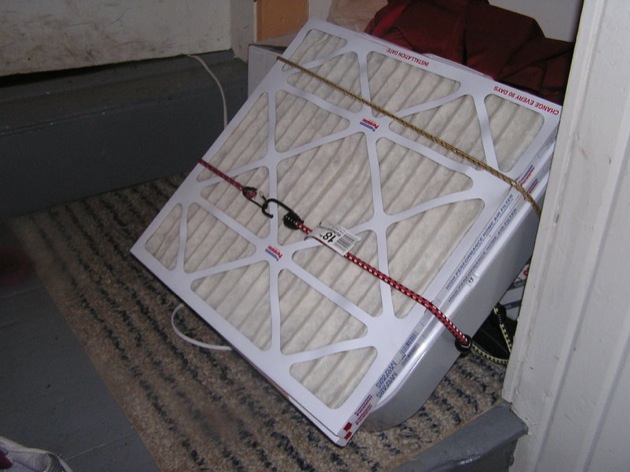 Set the fan up right, plug in, and turn the speed to medium.  Let it do its thing for 8-12 hours, or until nice and dry. 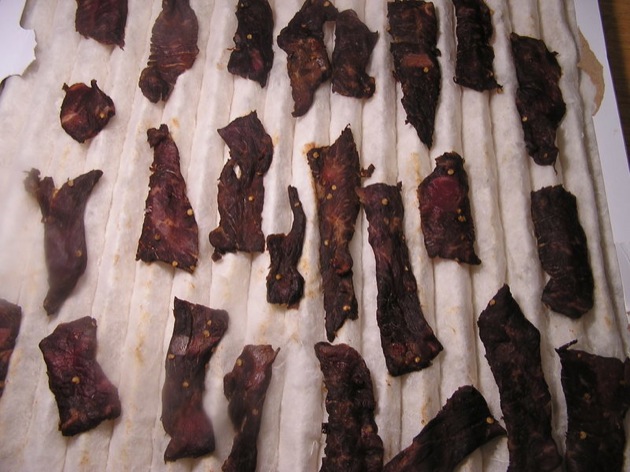 The meat can be stored in a plastic bag for a few months.