Pasta Cacio e Pepe: Are Fancy Pastas Worth It?

Over the last couple years, with a great deal of enthusiasm, I've learned to cook more skillfully.  I spend all sorts of time reading endlessly about technique, ingredients, and recipes, and I cook almost every day.  I think my cooking has improved.  I've developed good instincts.  I know that a roast chicken needs to be very dry before it goes into the oven so that it browns rather than steams.  I can be fairly sure how close linguine is to al dente by how it bends under my tongs.  I've started to use my sense of smell to know when something needs flipping, when it needs lower heat, and when the next ingredient should go in.

Obviously, having these kitchen instincts is the most important part of cooking well.  You can spend lots of money on good ingredients, but if you don't know what to do with them, you're wasting your time (and money). But I've been wondering lately if the pendulum swings the other way.  Can a great chef take run-of-the-mill ingredients and make a great dish from them? How much of a good meal is skill, and how much is fantastic ingredients?

I remember about a year ago I was living on the edge of Prospect Heights in Brooklyn, technically in Crown Heights, a very interesting neighborhood on the edge of gentrification.  My grocery options there were pretty limited.  There was a C-Town nearby, which was heavy on the processed food and hit-or-miss produce-wise (I once stood in line with a guy doing his weekly shopping: 5 boxes off Kraft macaroni and cheese, one can of spam).  So I used to complain a bit about my raw materials as a cook, probably because I wasn't versatile enough to know how best to use what was available.  Around that time I met Todd Coleman of Saveur , who lives in the general area, and ran into him in the grocery store (Not the C-Town: a nicer one, but a regular Brooklyn grocery store nonetheless). I did some complaining about the produce, thinking it would be a good bit of kibbitzing, but he dismissed what I said immediately.  Good techniques make a chef, he said--not good ingredients.

Certainly, a chef has to work harder to make lackluster ingredients taste great. But maybe that's why it's important: anybody can drop into a fancy grocery store, buy expensive, high-quality produce, and do very little to make it taste great.  You could say that the better the produce, the more likely it's good because it's in season, therefore it's virtuous. By cooking properly with good ingredients, you end up doing less to the them because they are great in themselves; simplicity in cooking reigns.  But in reality, we don't always have great produce available to us in season.  I like the idea that non-fancy ingredients present a
challenge.

However, there's one thing that I've recently changed my mind about.  It began at Franny's , the restaurant Elin and I save up to visit more than any other, because the pizzas are crispy and delicious, the cocktails are interesting, and the pasta is frickin' outstanding.  Just without a doubt some of the best pasta I've ever eaten, and incredibly simple.  I've never been happier eating a bowl of noodles that is simply called Pasta Cacio e Pepe " (Pasta with cheese and black pepper). I couldn't figure out why it tasted so incredible.  It wasn't freshly made pasta, I could tell: it had the unmistakable bite of dried pasta.  And I wouldn't have wanted fresh pasta, because you don't always want that smooth, silky texture.  I was lost.  Was pasta this good out of my reach? 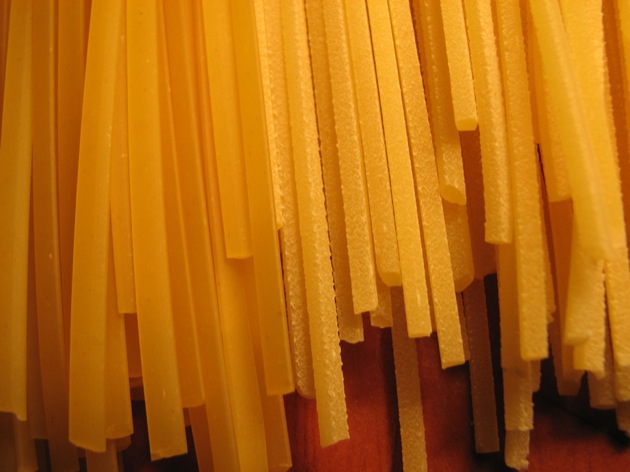 I broke the dish down into its parts in my head: Pecorino cheese, black pepper, water, pasta .  I could buy great Pecorino.  I have good peppercorns.  We live down the street; our water source is likely the same.  So I asked a waiter one day what kind of pasta the chef uses, and he found out: Rustichella d'Abruzzo.  I'd never heard of it.

I started doing some research into this whole world of fancy pastas.  Now, I should say, it was an upgrade for me, going from the 2-for-1 regular pastas to the "imported" Barilla and DeCecco , which I thought were pretty much the best around.  Those are consistently good pasta brands, recommended by most sources as your best option in the grocery store.

But I was really, really curious to try these so-called artisanal pastas.  They range in price, but are always at the very least four times what you'd pay for Barilla.  So what makes them special, and how can it be worth it? Isn't pasta just water and flour?  Somehow paying more for that bastion of gourmet cheapness, pasta, was counterintuitive.

Well, a number of things makes them special: quality of flour and water, of course, but two major aspects of technique: how the noodles are extruded , and how quickly they are dried .  You'll notice in the photograph above two pastas with very different textures (click to enlarge).  On the left, Barilla linguine, and on the right, my artisanal brand chitarra (a square pasta shape).  While the Barilla is smooth and sheen, the other is rough, pockmarked, and textured.  This is because it's been extruded using bronze dies, which are slower and more difficult to clean than the teflon dies used in most mass-producing pasta factories.  You can only make a fraction as much pasta in the same time using bronze dies--but it makes a superior product.  And most importantly, that rough, tacky texture makes the pasta behave differently with the sauce.  It somehow incorporates itself into the dish you're cooking in a more complete way; the sauce clings.

I couldn't find Rustichella in the city, though I'm sure it's somewhere, but a thread on eGullet led me to the BuonItalia store in the Chelsea market , a marvelous importer of Italian ingredients.  They  have all sorts of difficult-to-find foodstuffs, cured meats, fish, capers in salt--and prices aren't bad at all.  They carry a fancy pasta brand called Setaro , which is what I bought.  For 1kg (2.2 pounds), I paid 7 dollars.

It seemed like a lot.  But I assure you: it's the deal of the century (Rustichella, the Franny's brand, is available on Amazon.com , but it's more expensive).  I've already made 4 bowls of pasta for myself from this package, and I'm not yet halfway through it.  I think by the end, it's going to average out to about $1/serving, versus the 25 cents for Barilla on sale (more like 40 cents at regular price).

And the best part is the resounding success the pasta was: I came home, boiled some salty water , cooked 4 ounces of pasta , and in the meantime grated a handful of Pecorino cheese .  When it was done, I pulled it out with tongs so that some pasta water clung to it, put it into a preheated bowl, dumped a couple handfuls of cheese in, stirred it up very well, went to town on the pepper grinder, and added about 1/4 cup of pasta cooking water until it was creamy enough.  Pasta Cacio e Pepe.

I bit into it: it was a revelation.  It tasted exactly as I remembered it from Franny's.  You could really taste the pasta, and the mouthfeel was so interesting: more toothsome and textured.

There's no replacement for a pasta dish made with care and great ingredients; for that, Barilla is a great option, and I'll keep buying it.  But for minimalist pasta dishes like this that come together and depend very much on the quality of pasta--it's hard to imagine going back.

If you don't live in New York, Setaro is available at http://www.buonitalia.com .  There are other brands to try, like Latini.  The most important indication is the texture: look at it closely, and look on the packaging for mention of bronze dies.  I guarantee it will surprise you.