They Came, I Ground, We Ate: Which Cuts Make for the Best Burger?

How to make a better burger at home.

Grinding meat may seem like an exercise for those with too much time on their hands, or those overly devoted to doing things from scratch--which I am.  But I'm here to argue that there are more compelling and more logical reasons for doing so: for one, the meat will taste better.  You'll also know where it omes from, unlike with a styrofoam tray from the grocery store, which is likely the sum of countless cows from faraway places, the bits and trim leftover from preparing other cuts for sale.

I think the safety of grinding your own beef speaks for itself , but as a consumer that's really up to you.  My interest is in the taste, which, I think, can't be argued with.  I'm certain that freshly-ground beef tastes better.  You'll have control over the flavor, texture and fattiness of the result.  And it will taste fresher, with no time to oxidize.  Like the difference between black pepper from a plastic shaker and fresh stuff right out of the grinder.

Thanks to a random Amazon.com price drop a couple months ago, I'm now a proud owner of a KitchenAid mixer.  That hulking fixture on countertops everywhere which every respectable cook is supposed to have, even if it's just collecting dust somewhere.

I've resisted buying one of these things for awhile, but the sweetener in the deal which pushed me over the edge was the promise of a free meat grinder attachment.  The Amazon.com page promised that it would be sent to me swiftly, after I provided my personal information on a rebate form, of course--if by swiftly you will consider 6-8 weeks.  I meticulously filled out the boxes in neat capital letters, photocopied my receipts, and put two stamps on it to be sure.  These precautions are essential, or else your rebate promise will be lost in the mail or annulled because of bad weather or the indigestion of the person reading it or go up in the smoke of one technicality or another.  Despite all odds, about a month ago, the thing arrived.

My initial hope was to start making lots of Italian sausage, and eventually cured salami.  And this is certainly in my future.  But until I purchase a sausage stuffer or a funnel, another project has distracted me first.

Once again the impetus for this culinary project was my friend Austin's arrival in New York; I couldn't say why or give a good reason, but his visits from Providence have become excuses to try absurd kitchen projects.  On a whim, Elin sent out an email to a handful of friends promising home-ground burgers and shoestring fries--and every single one of them wanted to come. Whether it was coincidence, or the promise of delicious freshly-ground sliders, I'll never know.  But 12 people were eating at our apartment and I had no idea what I was doing.

The first question was what cuts were best to grind.  Which led me to another question: what exactly are we looking for in a hamburger?  Jeffrey Steingarten wrote a piece in Vogue (thank goodness Ed Levine recorded the results on A Hamburger Today, or we'd all be in the darkness that is food life without a subscription to Vogue, a magazine that refuses to share Steingarten on the Internet) asking just that question, and settled on the following important qualities: "...that the meat patty be profoundly beefy in flavor, mouthwateringly browned on the outside, and succulent (a combination of juicy and tender) on the inside."  This seems like as simple and good a definition as will ever be written.

Arriving at a burger with all three of those elements is elusive.  The cooking process is one part of it--whether the patty is grilled over open flame or seared on a griddle, how long, at what temperature--and the combination of cuts from the cow is another.  Most restaurants use a large quantity of chuck and combine it with cuts like brisket, sirloin, or flank steak.  Steingarten eventually decides--after attaching his mad-scientist mind to a series of inquiries and carrying out sundry experiments--that a combination of chuck, boneless short rib, and brisket is best.  I did some of my own research and found some intelligence about what the Shake Shack uses in their burgers, including the scoop on Danny Meyer's Blue Smoke burger , which may be the same grind as Shake Shack, as he owns both restaurants.

I set off to the butcher ( Los Paisanos on Smith St. in Brooklyn) the morning of the aforementioned burger party.  Unfortunately, they have a limited quantity of grass-fed beef available, but all their beef is of good quality, free of any antibiotics and optionally organic.  Though I would have preferred grass-fed, this was at least coming from a high-quality, experienced butcher shop.

Once inside, I ordered a random assortment of meats with the butcher's gruff Brooklyn advice, which is to say clipped and unsmiling but ultimately helpful.  I ended up with a couple pounds of stew meat (chuck), a couple pounds of sirloin, a pound and a half of untrimmed brisket (the untrimmed part is important, because the fat is important), and a pound and a half of short ribs (boned).

Brisket on the left, sirloin in the front, short ribs in the upper right corner, chuck in the top middle.

A couple hours before grinding, I put all the essential moving parts of my grinder into the freezer so they would be as cold as possible.  Then, I cut the meat into reasonably chunks, trimming off any overly grisly parts that would clog the grinder, and separated it into three different burger combinations:

The Classic (i.e., whatever cuts i had left, mostly chuck and sirloin plus fat from the brisket)

I put the various chunks of beef into the freezer; they grind best if partially frozen.  The reason everything goes into the freezer is that cold temperatures are paramount--grinding generates heat, and heat melts fat.  If this starts to happen, the ratios will be all off and the burgers can get mealy. 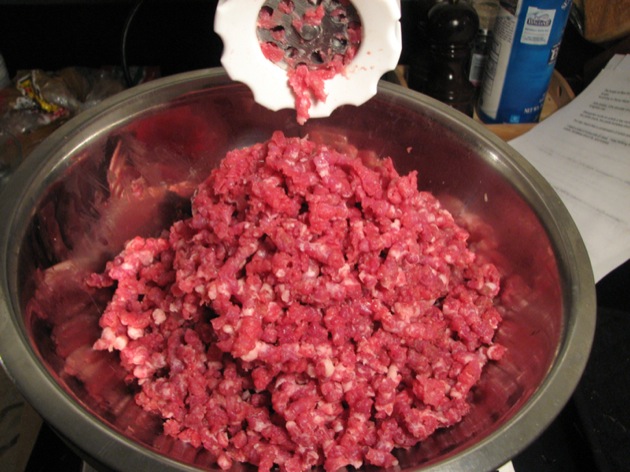 Once ground, I formed them into loose patties--working the meat as little as possible is important so that the end result doesn't get too tough--and seasoned with salt. Each round of sliders were cooked on a medium-hot griddle until medium or so. 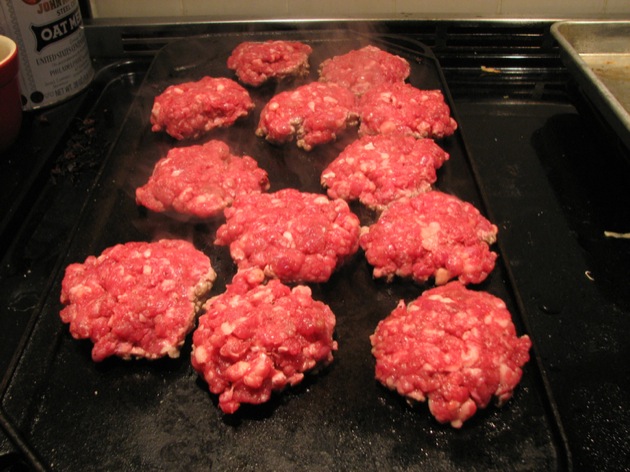 For toppings, we had homemade mayonnaise, caramelized onions, avocado, lettuce, tomato, and a wonderful selection of cheeses from our friend Tory : goat cheese infused with garlic and coated in peppercorns, Danish Blue, other melty things I can't remember.  For buns, we chose Martin's potato rolls, which are readily available in most grocery stores.  They have a good sweetness and are a good balance of sturdiness and softness--the bun should not go soggy under the meat's juices, but not be so hard that the patty or any toppings squeeze out when bites are taken.

Elin, queen of potato duty, boiled some red spuds for a cider vinegar and dill potato salad, and cut innumerable potatoes with Tory into matchsticks to make shoestring potatoes--the same ones the Spotted Pig serves with  their massive burger .  The recipe , from Jamie Oliver's latest , is fantastic; you only have to fry the sticks once because they're so thin, making them far less cumbersome than traditional French fries.  They come out airy and golden. 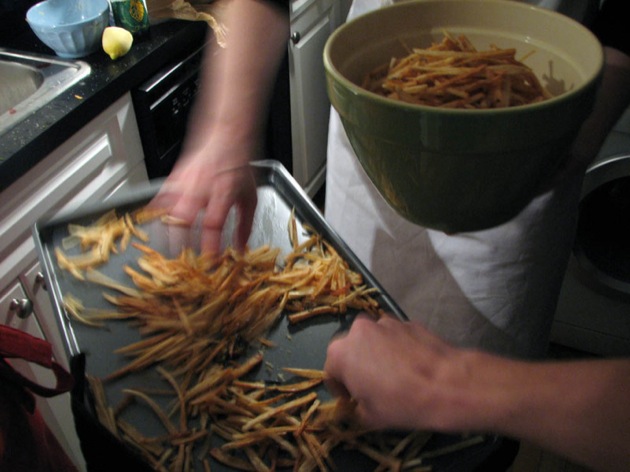 The results of the taste test?  Almost everyone liked the first burger, the Shake Shack, sirloin and brisket, the best.  It was the most straightforward beefy, juicy option.  The Steingarten came in second, as it was certainly beefy but almost had too much going on, lacking a clean taste.  The final burger nobody mentioned because they were all too full and drunk to say anything.  Though I liked it.

The results of this survey are quite unscientific: a couple of problems present themselves.  First, cooking 36 burgers does not allow much control over the delicate texture and doneness of each; it's unlikely that the burgers were cooked the same from round to round.  And second, sliders are not the best way to bite into a burger and taste that juicy beefiness; they're too insubstantial.

In the end, though, all the burgers were better than they would have been with pre-ground beef, and the process was both novel and delicious.  If you don't have a meat grinder, perhaps you have a food processor--that is another tool that works well.  Instead of grinding the meat, you'll be chopping it, which is actually the way they used to do it, by hand.  Just put the cuts in and pulse it one pulse at a time until the texture is right.  Some chefs even prefer this method.

Whatever further adventures my meat grinder holds, I know quite certainly that my mixer will not be gathering dust.  Not with summer coming and all those burgers to eat.