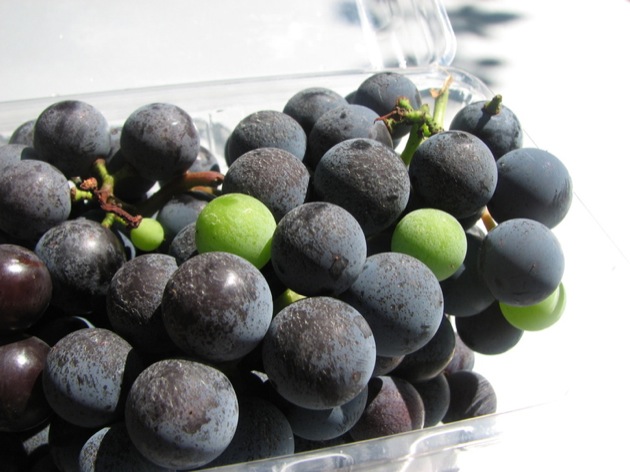 I’ve never made jam before, and haven’t had that much desire.  It seemed a lot of work, and prone to failure.  Sterilizing jars, crushing fruit, learning the right ratio of sugar to pectin so that the end result is the right consistency—these things could be avoided by paying a few dollars for some nice important preserves from France.  No harm done.

The other day a little blurb from the venerable Ruth Reichl in my Gourmet Weekly email—which, actually, you should check out because it consistently has some interesting gadget or ingredient to mention—arrived in my inbox.  Ruth, also, confesses to jam virginity.  Yes, the woman is fallible.  She cites similar reasons, like the annoyance of sterilization, then mentions what changed her mind: freezer jam.  It’s a similar technique to traditional jam-making, but instead of jarring the results, you just put it in the freezer.  It lasts for months.  Interesting.

This weekend the farmer’s market started selling concord grapes.  I always buy some when they come in season out of sheer excitement. They’re delicious and have the novelty of tasting like that artificial grape flavor. (Boy do I have this backwards. But I suspect so does anybody who ate popsicles as a kid.  So this is where they came up with that grape flavor!)  But I also get tired of eating them for the same reason grape popsicles are always the ones left in the box--the flavor gets tiring.  And because the insides are almost gooey, with two or three seeds suspended inside which take real work to dislodge.  You can’t just pop these like a bowl of crisp red grapes.  They’re work.

It didn’t occur to me that it would take just as much work to turn into jam. But it seemed easier than trying to eat them all.  Elin’s mother is in town and she was enthusiastic about making jam.  So we all plunged into the process with no idea what we were doing.

Our first score was to find a special kind of pectin that, unlike the traditional kind, does not require you to add lots of sugar for it to work.  Apparently normal pectin, the secret ingredient that makes jam congeal, is sugar-activated.  But this product proudly proclaimed that it’s calcium-activated, making lots of low-sugar jam making possible.

Our first problem: removing the seeds. 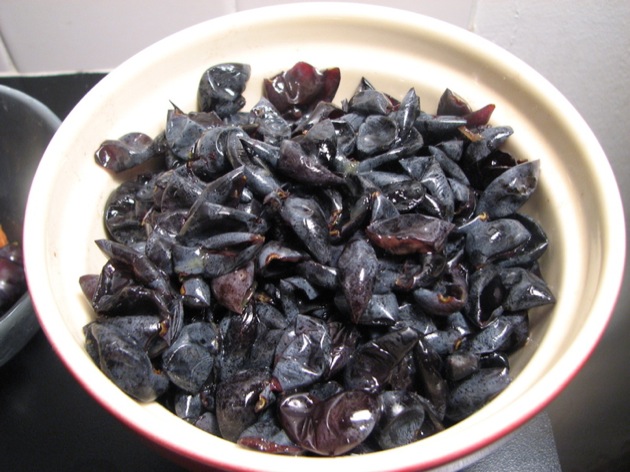 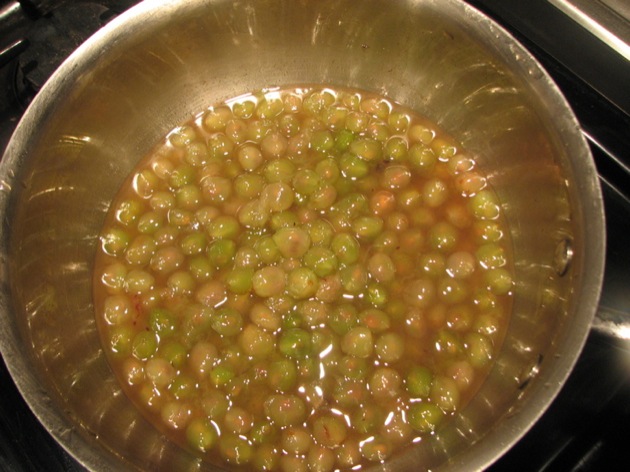 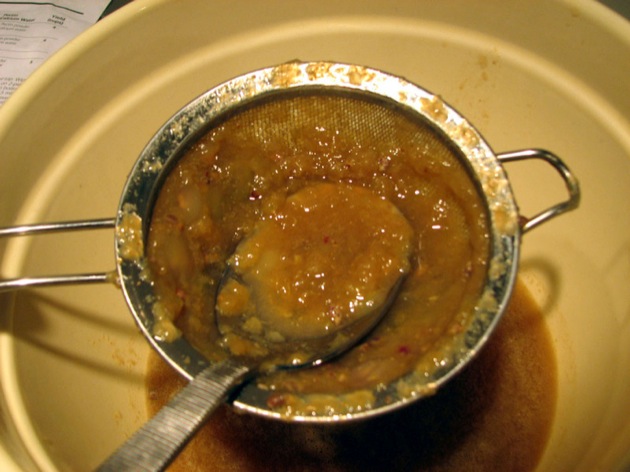 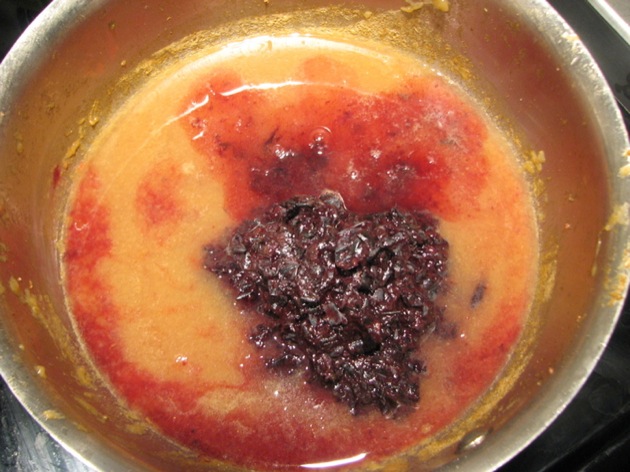 The skins slipped off easily, so we set them aside.  In a saucepan  we simmered the grape flesh with a bit of water to soften it up, then shocked it with an immersion blender to, in theory, release the seeds.
This kind of worked.  We cooked it for a while longer, then attempted to strain out the seeds.    We ended up straining most of the flesh, too, so that we were left with a sort of grape juice.  At this point, the jam was a very unappetizing brown and yellow color.  Undeterred, we chopped and added the skins and let the whole thing cook gently until they softened. 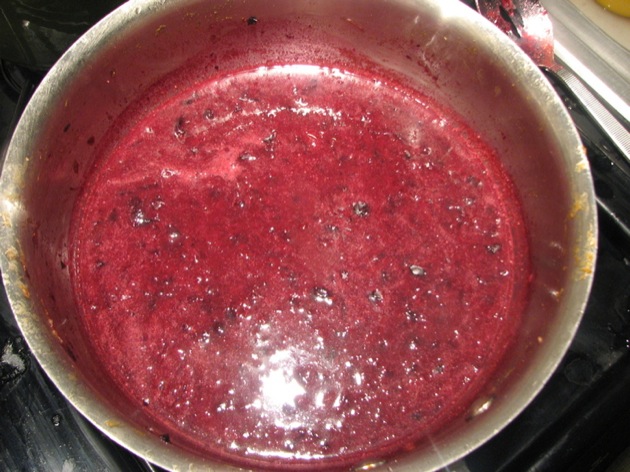 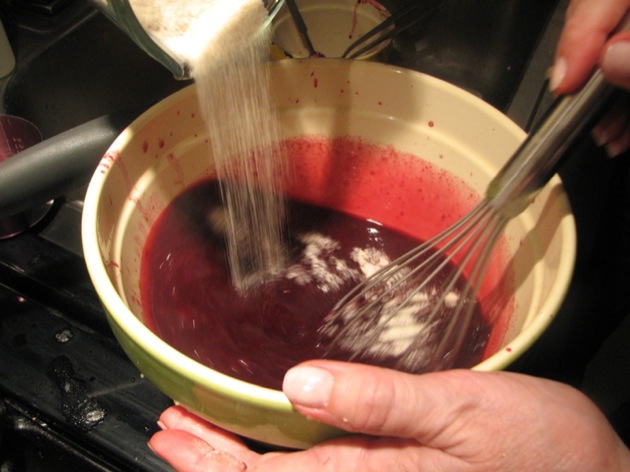 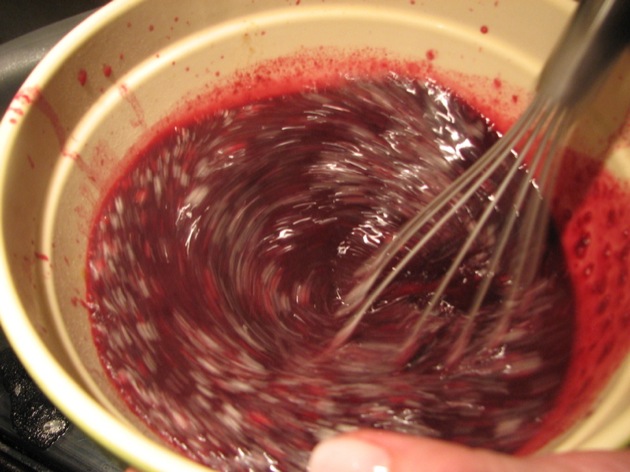 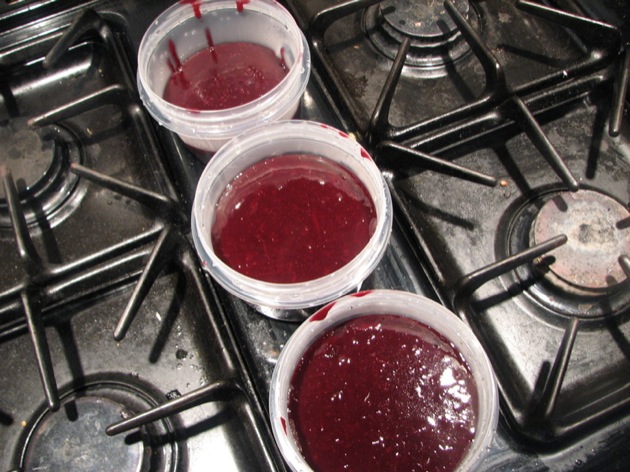 Then we tried to figure out how this new!  improved!  pectin was supposed to work.  The instructions were dizzying-- see for yourself .  Different methods for different types of fruit, of course, but also different ways of preparing the calcium powder (with heated water in a food processor for some cases, dissolved in regular water in others, put in before the fruit is cooked in one instance, at the end in the other), different
amounts of sweetener used, different times to add the sugar (before or after the pectin, with or without the calcium powder).  Different methods altogether if you’re doing “freezer jam.”  It all got very ugly and the instructions got ripped and we just all threw our hands up and started dumping in powders and liquids and hoping for the best.

I should have read the directions more carefully: when writing this post I've noticed that the company offers a Jam Line telephone number to call.  And they have a very friendly website.  In fact, I don't want to disparage this product at all, because it seems great.  I just have no idea what I'm doing.

When it went into the freezer it was still fairly un-viscous.  The next day, we tried a tiny spoonful. It was unfortunately…pretty bad jam.  I have a feeling we used too much pectin.  It looked good, but it didn't have a lot of flavor.

I also think the fact that we had no real fruit pulp, only a sort of juice and skin, was a problem that lead to our making jelly-fied fruit juice, rather than jam.  In fact, that’s why it’s probably not a great idea to make jam out of concord grapes as opposed to, say, peaches or strawberries, which had a nice flesh to them that would give some texture.  What we created was, ironically, like some sort of artificial-tasting grape jelly, except it didn’t have 7 pounds of sugar like your average grape jelly, so it just tasted sort of dull.

But I’ve now attempted to make my own jam.  And for some reason I'm undeterred.  I want to turn around and try it all over again.  Anyone have any tips or success stories?  Please share them in the comments. 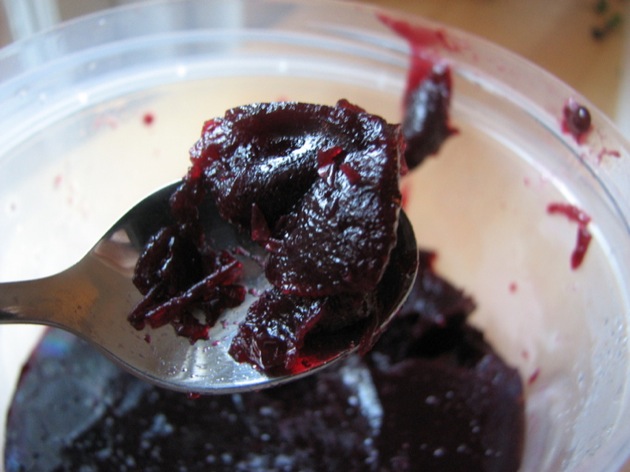