First was the rather easy substitution of bourbon for the cognac

I tend to spend way too much time researching what I'm going to eat.  Nearly every recipe is cross-examined against other works I have, just to make sure I'm doing things correctly.  But I was on to this recipe the moment I saw Alton pull out his steaks.  I didn't check if this was the authentic way to make this, I just went for it.

What could cause me to go into such enthusiastic fits?  Steak au Poivre.  I’d never had it.  I don’t know how I made it this long without the French classic, but I had, and was ready to rectify the situation.

The only thing I thought might need tweaking was the price.  For some good quality fillet mignon’s I was going to have to drop more than I wanted to for a weeknight meal.  And there was also the cognac, something that never lasts long in my house (I love sidecars! ).  I decided to make exceptions.

First was the rather easy substitution of bourbon for the cognac. Obviously not the same thing, but this could significantly lower my final bill.  And I would be lighting it on fire.  After the explosion, I didn’t think the taste would be that different.

Then came the beef.  Tenderloin is expensive.  So I went to the butcher at the North Market and asked for the next best thing.  The nice butcher handed me a big hunk of Sirloin-Tip.  If I cut this into perfect pieces, removed all the silver skin and clunky fat strips sticking to it, the meat would behave sort of like a filet mignon and for nearly 1/3 the price.  Perfect.

This looks a lot like my Fillet Mignon the Poor Man's Way , and that's fine.  It is cheaper, richer, and a tad more true-blue to the authentic recipe, even if some of the ingredients aren't the same.  It was the perfect way to indulge in my Alton-inspired fantasy at night, and afford to pay for gas in the morning.  The rich may certainly just forgo the hard work required to prep the meat and buy filet mignon. But what’s the fun in that? 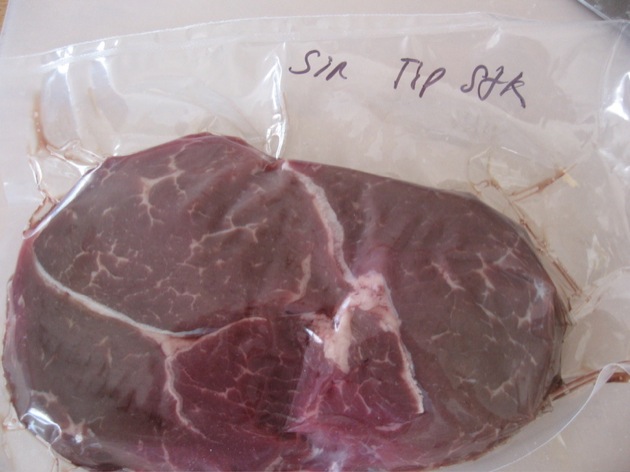 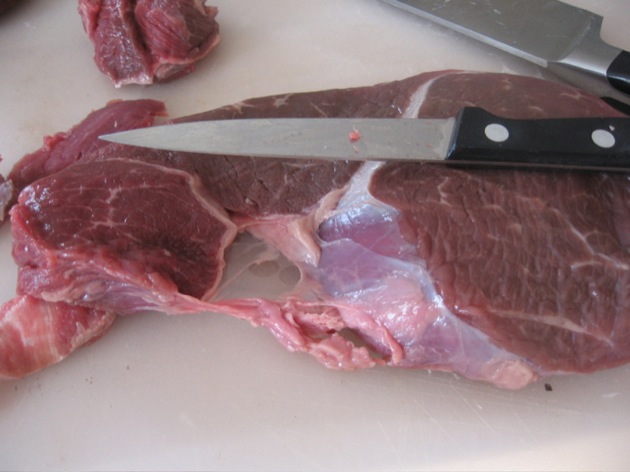 To get the Sir-Tip in roughly the same size as the fillet mignon and almost as tender, I had to cut the steaks along the white parts.  Then I removed any silver-skin I saw stuck to the pieces.  After I had done this, I was left with three pieces.  Two of these looked much like the fillet mignon when I wrapped them with rubber bands.

I'm not sure if this is necessary, or if the steak would have been as good had I just left it whole.  But it made me feel better about myself.

Sprinkle the steaks salt.  Crush the peppercorns with a spoon, and then press the steaks into the pepper, covering each side. 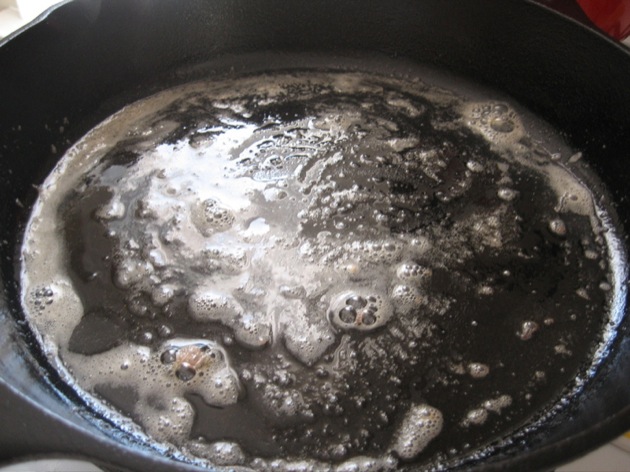 Melt the butter and in a saucepan over medium heat and then add the olive oil. 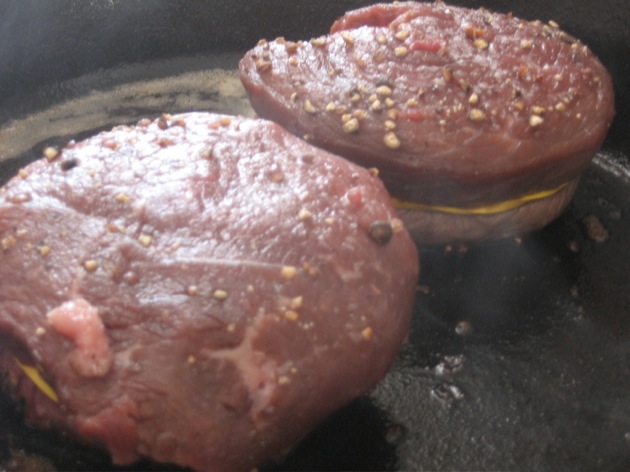 Place the steaks in the pan and cook for 5 minutes on each side. 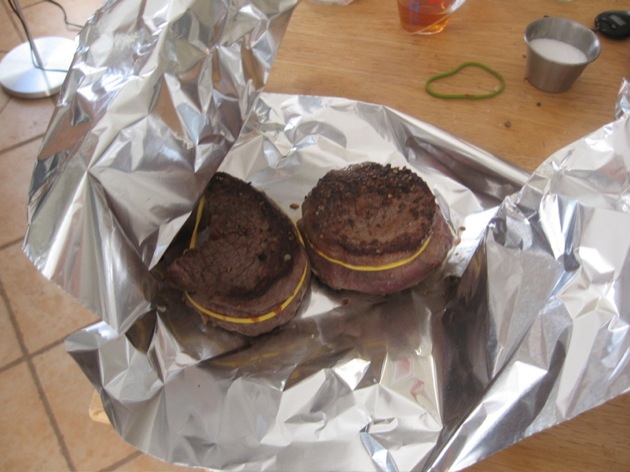 Remove the steaks, wrap in aluminum foil, and set aside.

Pour off the fat from the pan, turn off the heat, and then add the bourbon.  Tilt the pan towards the burner to light the bourbon on fire...or just light with a match.  It’s cool. 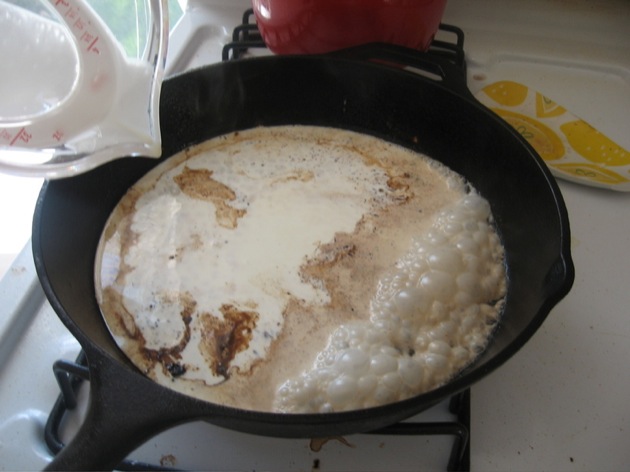 When the flames have subsided, return the pan to medium heat and add the cream. 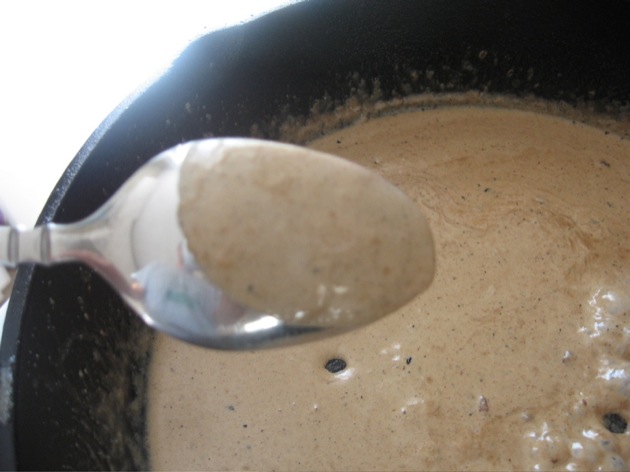 Cook for 5-6 minutes, until the sauce covers the back of a spoon. 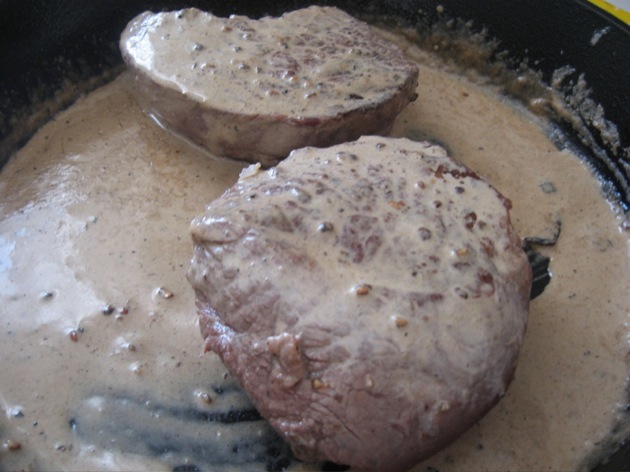 Place the steaks back in the pan with the sauce to coat.  Remove and serve. 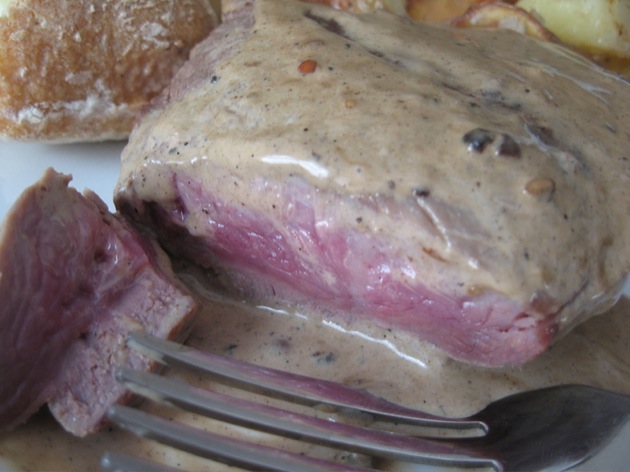