This is what happens when you start cooking before you’ve put in 30 seconds to check if you actually have what you need. 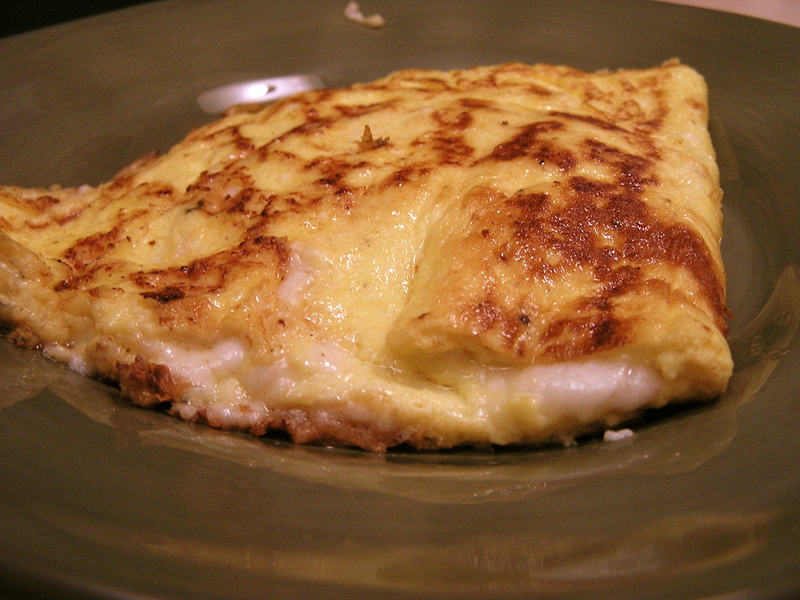 When I can’t decide what I feel like cooking, I’ll often visit epicurious.com and bum around until an ingredient that sounds great pops up--then I’ll start searching for that ingredient and I always find something that sounds tasty.  In this case, my ingredient was goat cheese.  I was doing a few searches at www.jamieoliver.com --we basically follow him and his British humor around with tongues wagging--and he had a risotto recipe up with lemon thyme, prosciutto, and goat’s cheese.  Back at epicurious.com, a few searches later, I ended up with a recipe for twice-baked souffle of goat’s cheese and thyme.  Something you’d find at a Christmas dinner, it had a simple ingredient list and we had the eggs in the fridge already.
When I started making it I realized that the simple ingredient list belies the timely and extensive cooking process, which includes letting the thing cool off for 30 minutes before it’s baked again.  It’s around 7:30.  I’m halfway through melting the butter to make a roux--the basic mixture of butter and flour that starts lots of French sauces or is used as a thickening agent--when I asked Nick, who was separating the egg yolks from the whites, to measure out the flour. “My hands are full of egg whites.” “Well wash them off, the butter is just about melted.  Wait, did you save the egg whites?  We have to whip those with an electric mixer and fold them into the yolk sauce later.” “Um.” “Crap.  Well get the flour.” Pause.  “We don’t have any flour.” Pause.  Arms shrugging.  Butter begins to sizzle.  Tumbleweed blows by, into my bedroom. “Goat cheese egg-yolk omelettes?” “Done.” And so the recipe became a lot easier. Though I can’t compare it to the souffle, it was really tasty.  We cracked our last two eggs into the bowl of three yolks, and took off. If the goat cheese is a little intimidating, I’d still encourage you to go for it.  This recipe uses the aged, drier variety, which is not the creamy, sweeter kind, but actually kind of looks like Swiss on the outside.  I didn’t realize the distinction until I got to the store.  It’s a little sharper and more complex and works much better for melting in an omelette.  We adopted the inclusion of dijon mustard from the original recipe, and whisked it in with the eggs and milk before cooking. We’d probably make it with some sausage next time, cooked separately and sprinkled in with the goat’s cheese. Also, it was a bit strange to make the omelette with mostly egg yolks, which meant it was denser and less fluffy--not a bad thing by any means.  It ended up allowing the tasty cheese to really come through.   This is what happens when you start cooking before you’ve put in 30 seconds to check if you actually have what you need. -Blake Aged Goat Cheese Omelette with Thyme Serves 2-3. Five eggs 2 tablespoons butter 1/3 pound aged (firm) goat’s cheese, crumbled. few sprigs of fresh thyme, leaves removed and chopped. a teaspoon dijon mustard 1/2 cup milk salt and freshly ground pepper Simple instructions here . 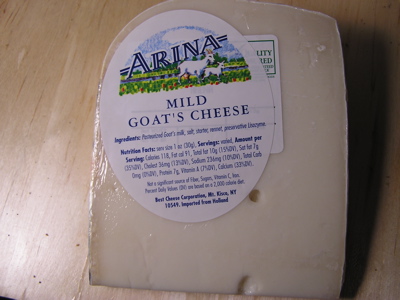 To get the right consistency for the omelette,  it's important to get the right kind of goat cheese. Arina Mild Goat Cheese was perfect for what we were doing.  It's a part of the "Best Cheese Corporation," so it really had to be. 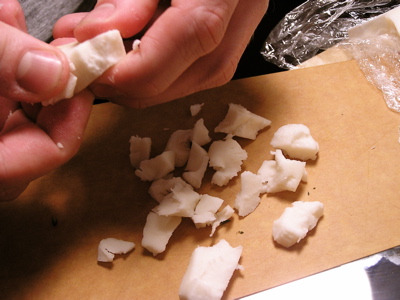 Break the cheese up into small hunks using your hands, or cut haphazardly with a knife. 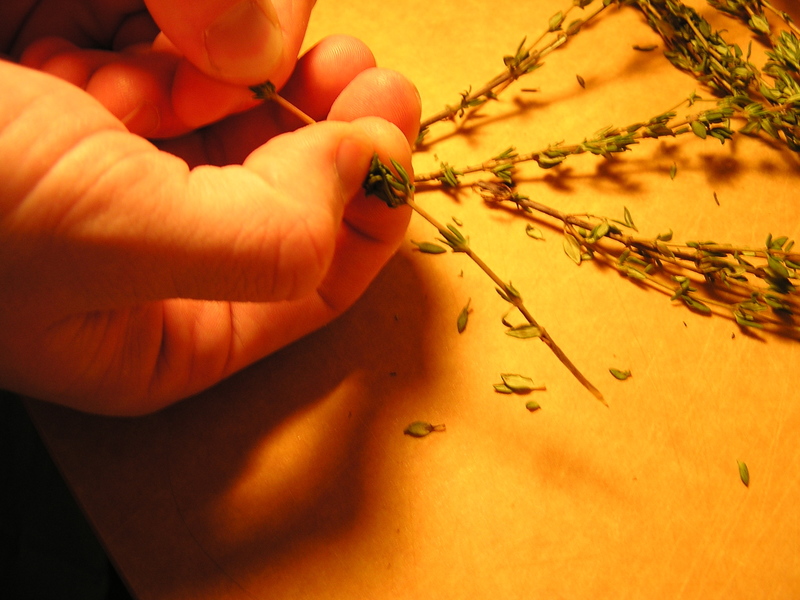 Remove the leaves from the thyme  by running your thumb and forefinger down the stem from top to bottom.  Chop it well. 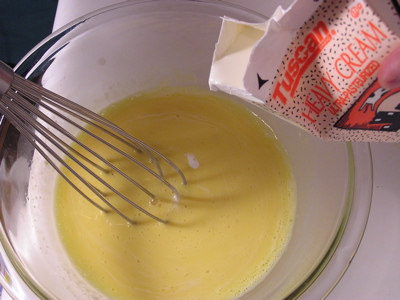 In a bowl put the eggs or egg yolks and stir.  Because we completely screwed up the original cheese souffle recipe, we used a mixture of two eggs and three egg yolks.  The more egg whites, the fluffier the omelet.  The combination we used created a very nice texture that didn't feel too heavy.  Once you have figured out the egg yolk to egg ratio best suited to you, then pour in the heavy cream and stir lightly.  Supposedly, you can use milk, too. 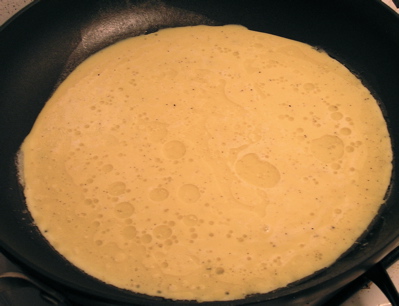 Put a tablespoon of butter into a skillet and turn the burner up to medium.   Wait till the butter starts to pop slightly, then dump the egg mixture into the pan.   It's important to let the mixture sit unmoved for thirty seconds so a nice base can form. 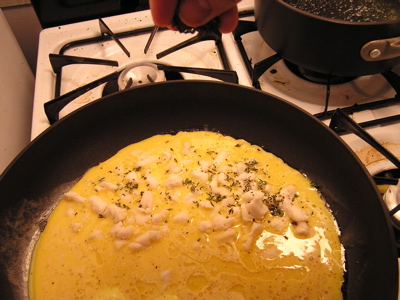 Once the base has formed put the crumbled cheese and the chopped tyme on one side. 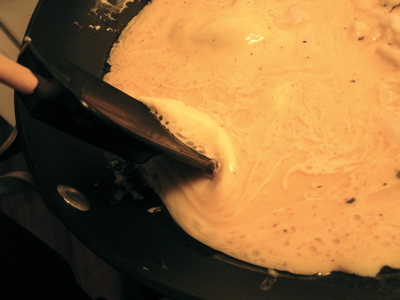 Using a spatula, loosen the eggs from the pan on the sides and lift a corner of it away from the edges.  Tilting the skillet back, let the uncooked eggs on top spill into the space.  Repeat until the eggs are no longer runny on top. 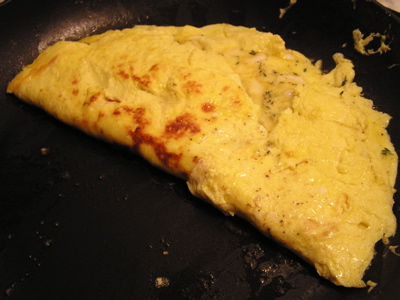 Now is the moment for great concentration.  Grab a large spatula and getting as far under the omelet as you can, attempt to flip it. We partly succedded, as picture attests to.  It's hard.  If you mess it up, don't worry, just mix it all together.  It will taste basically the same, but you will no longer be having an omelet.  And that's really a shame, for a correctly flipped omelet is a skill on par with other life-skills, like swimming and tying your shoes.  I've heard girls are also impressed.