We did our research, spared no expense, and faced the terrors of salmonella. We survived to teach you how to give this haughty dish an American makeover.

The Paupered Chef ransack their local butcher in search of the fresh meat to one of France's most risky dishes. Will they have time to cook it? 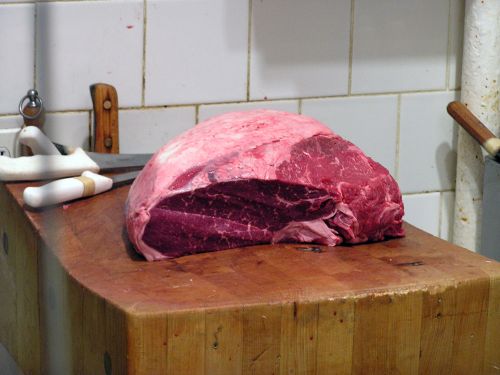 The Paupered Chefs ransack their local butcher in search of fresh meat for one of France's most risky dishes.  Will they have time to cook their steak tartare? We did our research, spared no expense, and faced the terrors of salmonella. We survived to teach you how to give this haughty dish an American makeover.

Steak Tartare is a French classic which requires one to eat raw beef topped with raw egg yolk mixed with other uncooked ingredients--quite literally, hard to swallow.  Also, an idea that's hard to resist.  You see, we're dangerous guys.

We still can't pinpoint exactly where the inspiration came from, but somewhere in the past couple of days I turned to Blake and said, "Let's make steak tartare."  Eyebrows rose, stomachs plunged, emotions ran high.

I first tried it when I was a waiter.  The chef was pushing this new dish, and since we complained that we weren't comfortable recommending something we'd never tried, the chef obliged us with a fancy plate with a couple forks.  Quite unlike anything I'd had before, I smiled politely, admired the interesting flavor of the various ingredients, and decided that I would not recommend the dish to anyone.

Having grown in mind and spirit the past two years, I thought I was ready to once again explore the risqué world of this classic dish of French cuisine.

At least, I thought it was quintessentially French.  The etymological game that insued, however, uncovered some unlikely threads.

Tartar |?tärt?r|, noun: a member of the combined forces of central Asian peoples, including Mongols and Turks, who under the leadership of Genghis Khan conquered much of Asia and eastern Europe in the early 13th century, and under Tamerlane (14th century) established an empire with its capital at Samarkand.

Then, the connection between steak tartare and conquerors of the Dark Ages started to get even weirder.

According to Wikipedia , these warriors didn't have enough time to cook up their kill, as they were duly occupied with pillaging the countryside--they had to eat their meat raw, atop horses, as they fled the scene.  More surprisingly, according to Larousse Gastronomique --(self described "The World's Greatest Culinary Encyclopedia" )--purists of steak tartare believe that only horse meat should be used.  Considering that we are not steak tartare purists -- for God's sake, horse meat? -- we derived a basic recipe from Larousse Gastronomique and The Joy of Cooking .

Safety being paramount at The Paupered Chef, we took all of the normal precautions when attempting this risky classic.  First, we bought fresh eggs from the grocery store the same day we made the recipe.

For the beef, we needed a leancut from the tenderloin, top round, or sirloin.  Before we went putting raw beef in our mouths, we had to find a butcher that would could feel comfortable with.  We decided on Leonard's, one of the most respected butcher shops in our neighborhood.  We sheepishly inquired about the best meat for steak tartare, and he immediately recommended top round.

To get the meat prepared, he cut strips off of the round, trimmed off the white fatty parts, and then put it in a meat grinder.  Any butcher will do this for you.  The end result looks dangerously close to hamburger, except completely red.

Part I: Mincing Meat With the Monguls 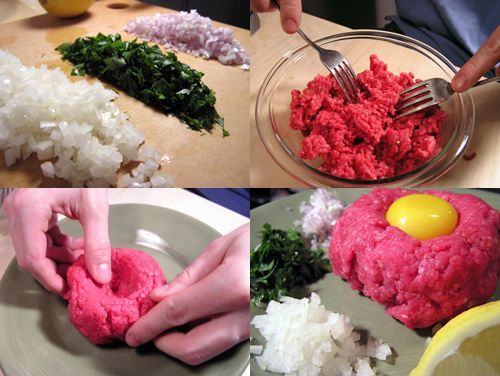 The actual process is quite simple and short.  First, thoroughly mince the onion, parsley, and the shallots.  Season the ground steak with salt, pepper, and a few dashes of Worcestershire Sauce.  Then, taking two forks, mix the meat together.  Once mixed, form the meat into two balls.  Then with a spoon (or if you have well-washed hands like us), use your fingers to hollow out the center. 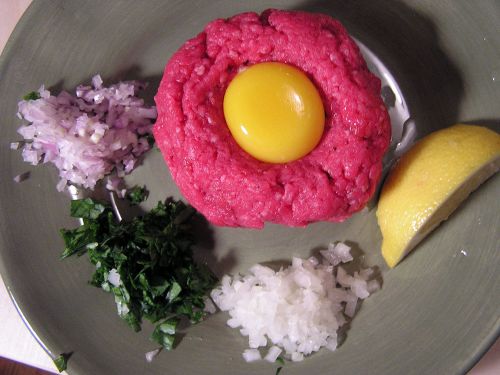 Seperate the egg yolk and place in the center.  Ring the plate with the various vegetables, a lemon wedge, a tablespoon of mustard, extra cayenne, olive oil, and a little bit of Worcestershire Sauce.

Tentatively, you can begin to try eating now.  Use the pair of forks to mix in a bit of egg for consistency, then incorporate other combinations of ingredients as you see fit.  You're eating Steak Tartare.

Part II - Getting out Alive

Now. Mix everything you have not eaten into a bowl and stir well. 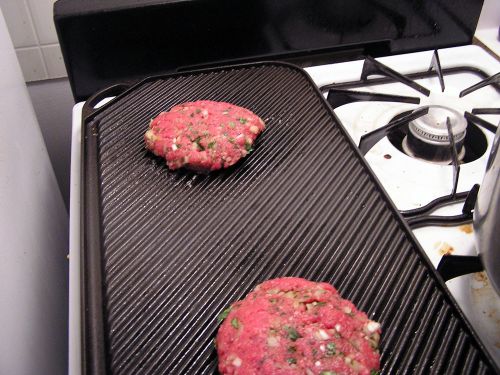 Form the steak into whatever sized patty you prefer, and place on a grill with a little bit of oil.   Cook for around 4 minutes, flip, and place slices of swiss cheese on top.  Cook for another 4 to 5 minutes or until there is no redness visible on the side. 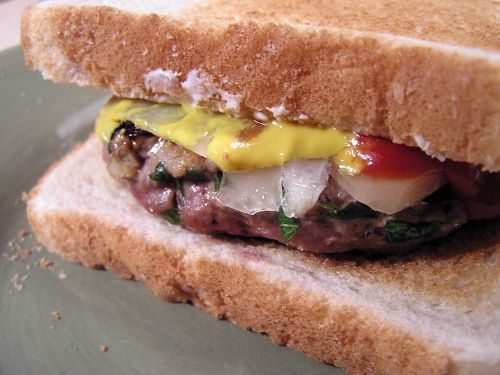 Toast some plain white bread.  Remove the burgers and sandwich between the bread.  Top with your favorite All-American ingredients, including but not limited to: ketchup, American yellow mustard, pickles, iceberg lettuce, and sliced tomato.

Post Script:  If you're French or happen to be a steak tartare enthusiast, we apologize.  However, you could never have expected us to eat horse meat in good faith.  Honestly now.

After Nick ate 1/4 of his and Blake 1/6, we had enough leftover for two healthy patties.  For the record, Nick still smiled politiely.  Blake did not.