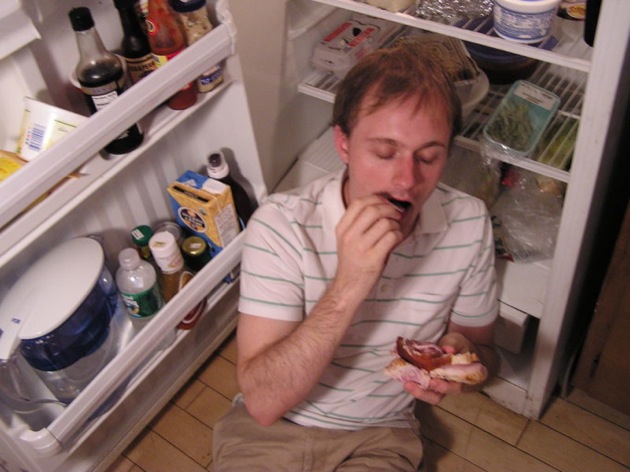 I had no reason to buy a ham.  No guests were coming over, there was no potluck to attend.  It was just a Monday and I had never baked one before and wanted to try.  So I hopped on my bike and set out to Fairway to secure the biggest ham I could find.  Sure, I could have trained myself on some perfectly reasonable ham steaks that would have happily fed my girlfriend and me for one, maybe two, meals.  But I wanted the real thing and the real thing is a 10 pound ham.

Not that it was hard; ham is nearly impossible to ruin.  It's also cheap.  All those 10 pounds cost me exactly $15.93, which would make this one cheap dinner party entree.  It could have very easily feed 10 people.

But it was just me and Abby.  And the moment that ham hit the oven the clock starting ticking away. Two people, ten pounds of ham, and less than 4 days to try and put the whole thing away before the carcass started to decompose.  I wanted to eat it all for moral reasons.  I didn't want to have a nice meal and then waste 8 pounds of ham.

The trick, of course, was to make the process as painless as possible.  Sure, a nice lovely ham tastes fine the way it is, but thick slices plopped on a plate would bore me to tears by the fourth day, and I needed to eat this hunk of meat for lunch and dinner for four straight days.  That's over a pound of ham a day that I'd have to dispose with.  Not an impossible feat, but one that might require a little foresight and a lot of ham sandwiches.

The first meal was easy.  I just dreamed up my favorite holiday feast, paired the sides down for two, and cooked the ham with a brown sugar glaze.  There are lots of techniques for maximizing the flavor, but I kept it relatively simple--a little too simple, perhaps.  Some recipes described scoring the meat before you cooked it, while others said to wait.  I waited, and it was rather difficult to cut any kind of intricate pattern.  But whatever went wrong with the appearance didn't translate to the taste.

All my ham knowledge came from a Good Eats episode I saw once, but I'm sticking to it, because host Alton has yet lead me astray.  And it was simple.  I didn't worry much about the nomenclature of the water in the ham.  I just made sure I had nice piece with the bone still inside.  That way I could pretty much guarantee that this was a natural piece of pork, and not some reconstituted, water-logged mess.  They call it a city ham, I guess to distinguish it from the country ham I didn't have the patience (you have to soak country hams for a day) nor the money (expensive!) to worry about. 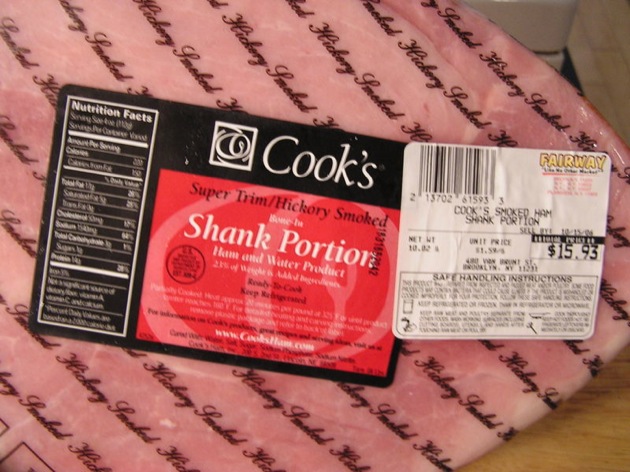 Adapted from the Joy of Cooking.
Preheat the oven to 250 degrees

Remove the plastic from the ham and wash the ham in the sink.  Dry him slightly with a paper towel and place cut side down on a roasting pan.  Some recipes suggested scoring the skin of the ham now, but you can also do it later.  I'm sure there are reasons for both methods.  I chose not to, but when I tried to score the skin later it was much more difficult than if I had done so at the beginning. 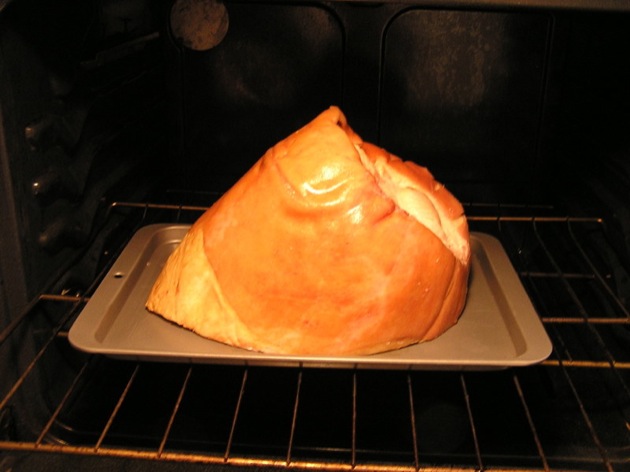 This is a cookie sheet, but I don't care.  Place the ham into the oven and bake for 2 hours and 45 minutes. 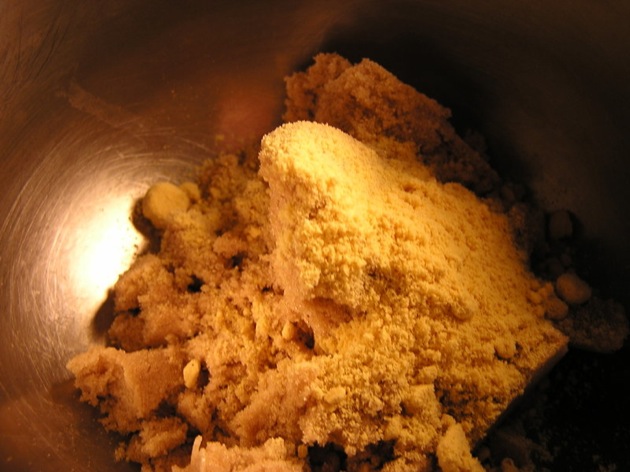 Mix the mustard and brown together until combined and then add the orange juice. 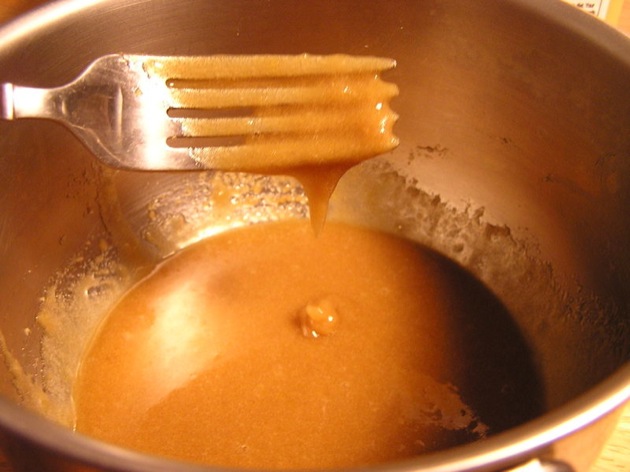 It should be paste-like, and able to stick to a fork/spoon/knife, or you're big hand if you see fit.  1/4 cup of O.J. is approximate.  Just pour in as much as it takes to make it like this. 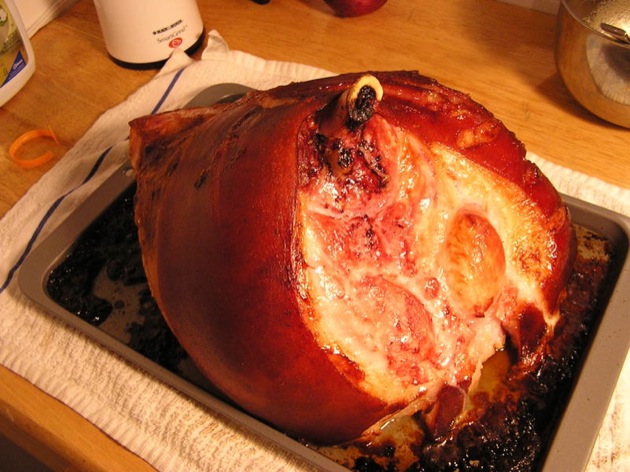 Remove the ham after the 2:45 minutes. 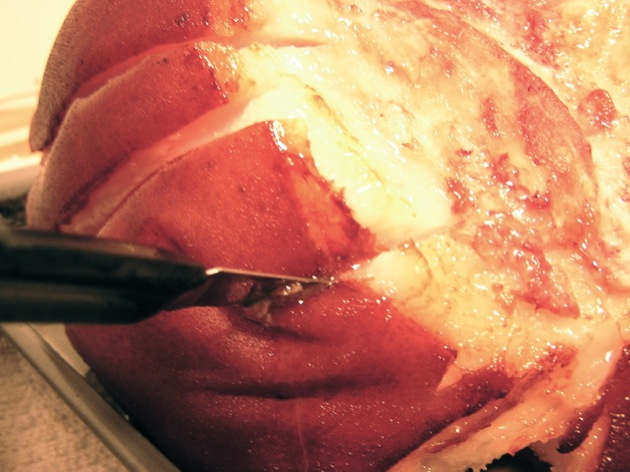 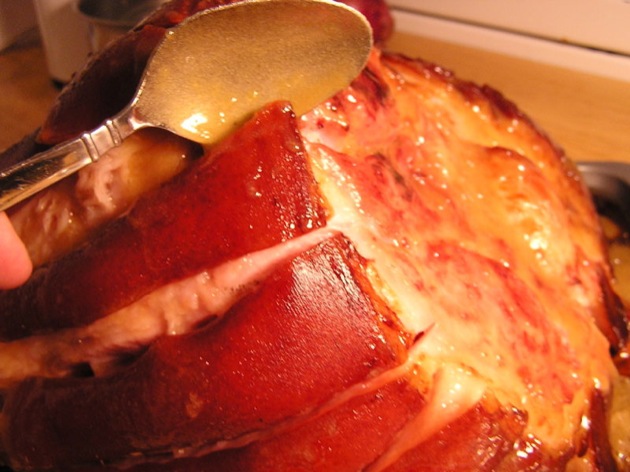 Cover the ham with the glaze and return to the oven for another 45 minutes. 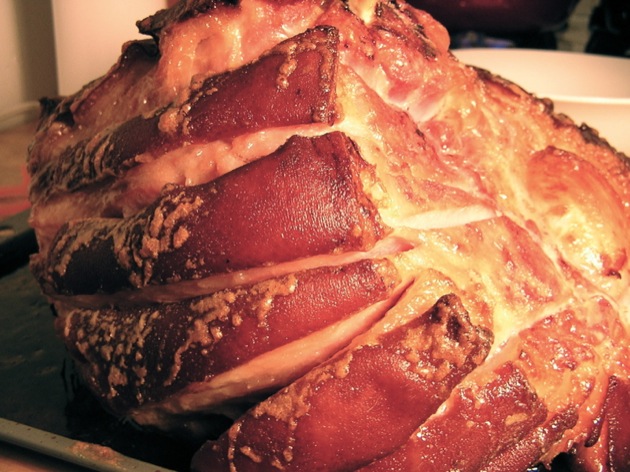 Remove the ham and let it rest for 5-10 minutes. 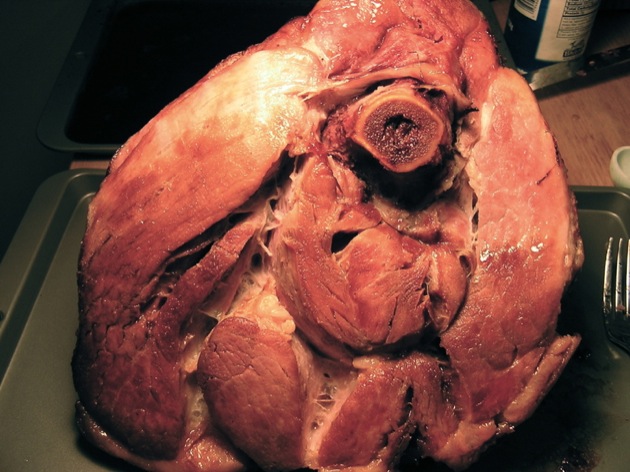 When it's ready to cut, I guess it's best to cut from the bottom. It seemed liked the easiest way to go.  Otherwise, I just went for it.  The sections separated, I basically started to hone sections off as I saw fit.  I wonder what the proper method is... 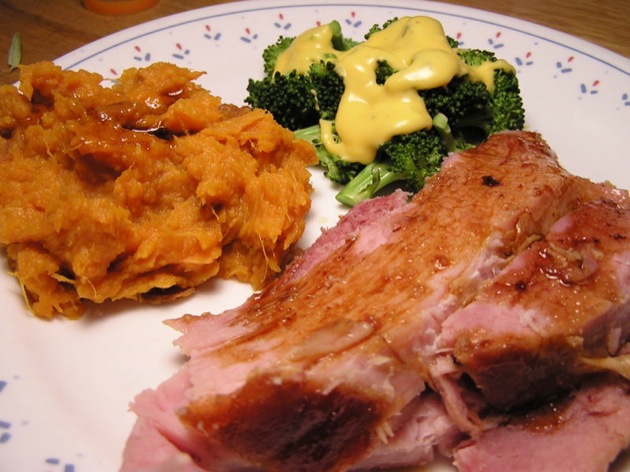 The bottom of the roasting pan will be swimming in juices.  Dump the contents into a bowl and try and spoon out the fat that rises to the top.  It will be liquid gold.  Coat your ham with the sauce, and side with whatever vegetables and starch you see fit - I'm a sucker for sweet potatoes and broccoli.