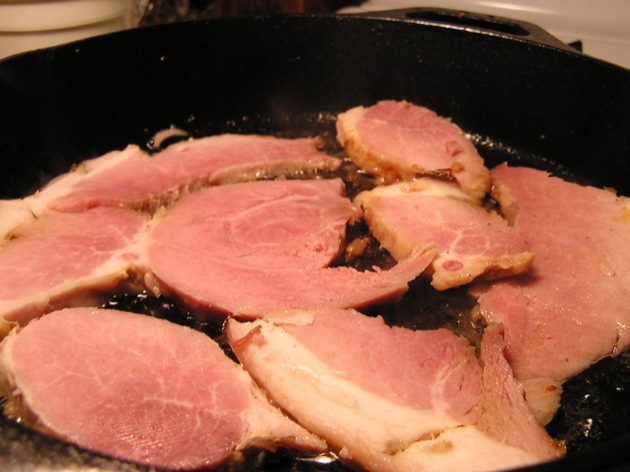 By the second day the roughly 8 pound ham I had foil-wrapped in my refrigerator had started to express its full potential.  What had tasted perfectly fine the day before became a sensuous, hands on event the next, as it had somehow increased in flavor as it waited in the fridge.  I wanted nothing more than to slouch over the kitchen table, picking hunks right off.  How could anything be better than this?

There are many recipes for ham out there, but most of them center around what to do the ham before you cook it.  Now that I had taken the plunge and baked the thing, I needed a recipe for what to do with the  nearly 90% that Abby and I hadn't eaten.  So I searched for a recipe that needed a large hunk of ham and one strange southern delicacy kept popping up.  Ham with red-eye gravy .  This gravy uses no cream or flour, only a cup of piping hot coffee.

It sounded too wonderfully simple to be wrong.  Fry up some ham, toss in some coffee, and plate.  As  self-avowed coffee addict, I'm always looking for new ways to introduce the powerful drug into my daily routine, and here was my chance.  Now I could make a fattening gravy out of it.  But why hadn't I ever heard of such a thing and, more importantly, would it be any good?

Red-Eye Gravy is a specialty of southern cooking and its legend (mostly likely a lie) goes back to none other than Andrew Jackson, the 7th President of the U.S. of A.  When he was but a general at the time, he called the head cook over to fix him some food.  Said chef had enjoyed too much of the moonshine the night before and had eyes as red as the furnaces of hell.  General Jackson, either in frustration or in a playful jest, told the chef to make gravy as red as his eyes.

The sauce also happens to look dark red.  But I'm sticking to the former story, because I just prefer my gravy to be christened by the co-founder of the Democratic Party, but that's just me.

The recipe is fairly simple, and is notable for its lack of ingredients.  Most recipes I read only had ham and coffee.  I was leery about approaching such a stark list, and I had reason to.  While I wouldn't say the meal was a complete failure, I'll definitely be keeping my coffee in cup where it can nourish my soul and not spoil the ham.  Tossing coffee into a scalding hot iron skillet tends to mar the flavor of the delicate bean a little bit.  The sauce is also going to be watery.  I tried it a second time with some flour, but it only amplified the bitter coffee taste.

I did fail in one respect by not having traditional country ham (this was a city ham, remember), so I really can't say if it would have tasted the same.  And I wonder if there is something else I'm missing from the equation.

The saving grace to this dish were the actually ham steaks.  I pan fried them in some of the fat left over from the ham and they were juicy, browned, and guiltily addicting. 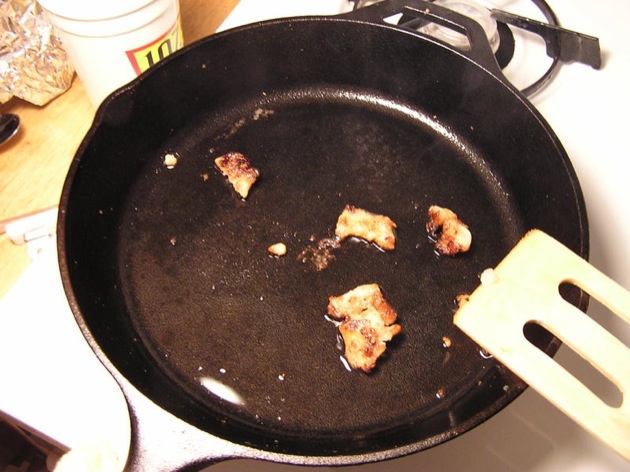 If you're going to be making a southern delicacy, you might as well go all out.  And going all out in this case means using the fat from the ham.  Just turn the skillet to medium and throw a couple fatty hunks in there and cook until they start to make a little liquid.  If you feel a little tepid just bail out now.  You don't really want this if you're not going to fry your ham in ham fat.  For some kind of validation read Real Food .   I suppose you could use a little less than I did here. 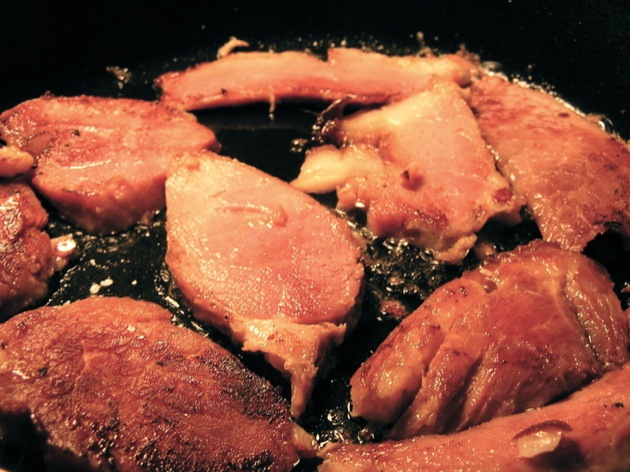 Toss the thickly sliced ham steaks into the pan and cook for around 3 minutes per side, or until they get nice and brown on each side. 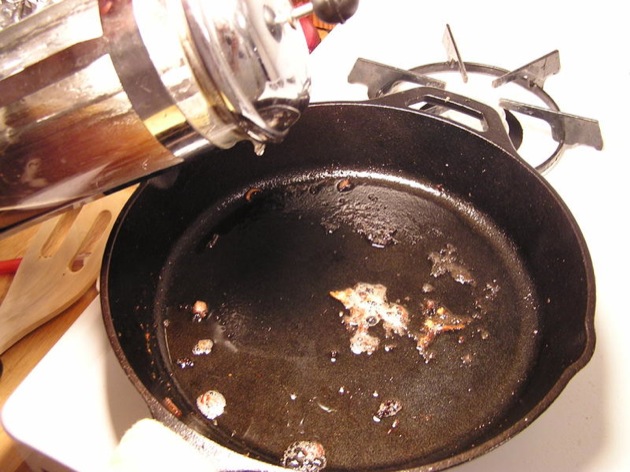 Remove the ham from the pan and deglaze with the coffee. 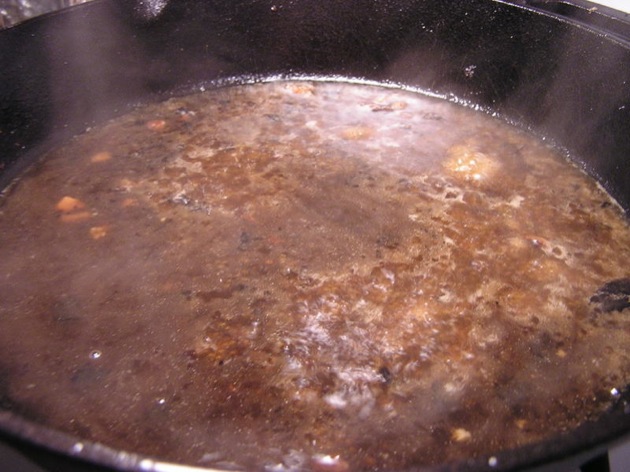 Using a wooden spoon, scrap the black bits of the bottom.  Reduce sauce by half. 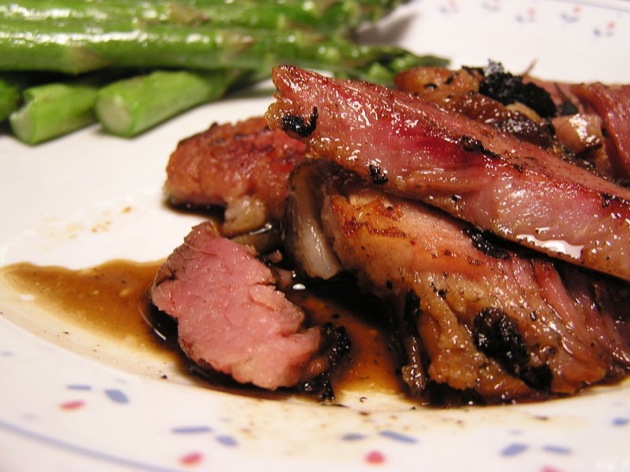 Pour it over the ham steaks, or whatever of them is left of them. 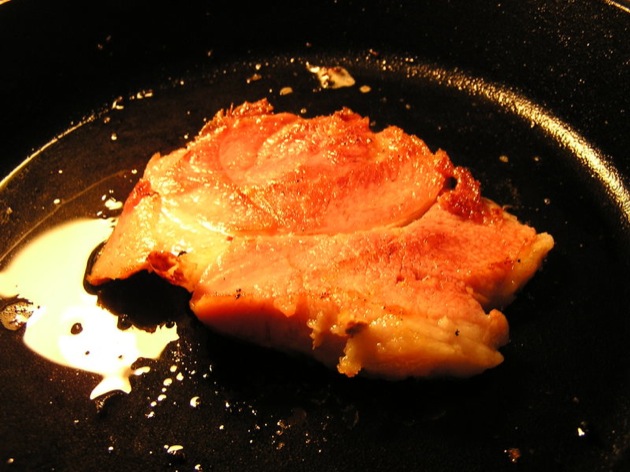 Get some more pure fat in there and fry another ham steak.  This one looks healthier than the last batch. 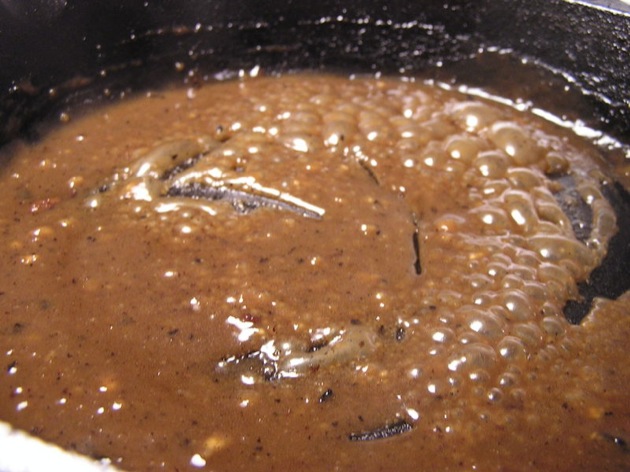 Remove the steaks when cooked, deglaze with the coffee, then add the flour.  Whisk until all the flour has broken up into the sauce. 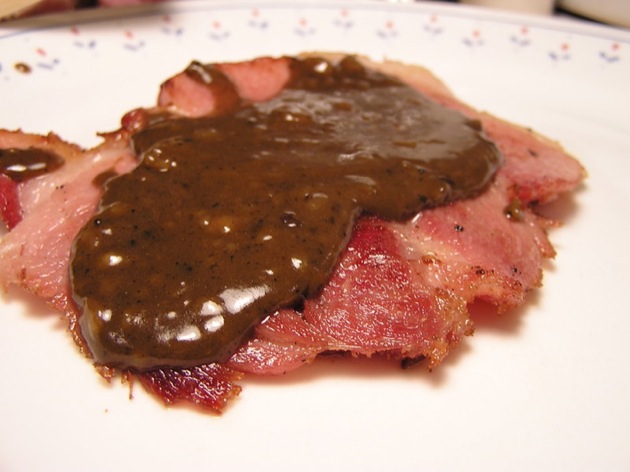 Pour it nicely over the ham.

This method certainly looked better than the other one, but it still tasted like burnt coffee, and I just can't do that anymore.