There are two kinds of cookbooks: some I buy and use, and others I buy and admire. I plan for the former, but end up doing the latter.  I have cookbooks about offal , bread-making , and curing meat , but I’ve yet to order beef bones to roast . I have a copy of the River Cottage cookbook , which tells you how to deliver a lamb, dig for scallops, grow carrots, make bacon, and butcher a pig.  But I don't have a farm, livestock, or a garden.  Why do I need to know these things?

They're full of things I'll do someday. I read about the process in books, pore over forums on eGullet , and decide firmly after fastidious comparison what kind of cold smoker I would build—should I ever happen to build one.  I read about the feel of a fillet of salmon after it’s cured in salt for one day, three days, six days.  I know the words people describe the smell of a living sourdough bread yeast culture.  But I’ve never actually smelled one myself.

In this strange combination of obsession and inaction, I recognize a hazy, yet firm line: the line between a home kitchen and a restaurant kitchen .  This is a line I’ve been wondering how to cross.

For example, after eating Fergus Henderson’s food at The Spotted Pig a couple weeks ago, I bought his cookbook .  I want to cook marrow bones in my kitchen.  But is that absurd?

What business do I have with ambitions to buy a pig and hang its cured hind legs from my ceiling--in a Brooklyn apartment?  Why do I want to build a cold smoker, smoke my salmon, and make homemade bagels to create the perfect lox?  Buy goat’s milk and make aged cheese?  I live in a city where you can buy high quality cured meats, pickles, cheeses, breads--all better than I could make myself.  They’re readily available. Yet I continue to imagine the day when I make every single thing from scratch.

I feel in a dilemma: I don’t think I want to go to culinary school.  But how does one otherwise become a better cook without becoming a chef?  In my case, I try to be as creative as possible and learn constantly--this blog helps provide the impetus for that.  But the trajectory presented by going to culinary school doesn't appeal.  I go to culinary school, and then what?  Cooking anonymously in some restaurant?  What attracts and returns me to food is the adventure, and sharing it with friends.  Cooking the same thing every day for strangers wouldn’t be fun for me.

I don’t really have an answer.  But in the meantime, books like Charcuterie , from which this blog post derives, help me transition from marveling at complicated techniques like meat curing, and instead to aspiring to them.  In great detail and with measured enthusiasm, the authors teach you how to cure, smoke, and salt many kinds of fish, meats, and sausages, and they extend the definition by teaching the art of pickling and other types of food preservation.  These types of food preparation produce some of the most revelatory and inspiring tastes possible--tastes that make you marvel at the possibilities present in a bunch of salt and animal meat.  The book gives modern sources for ingredients, tests readily available equipment, and provides illustrations.  In other words, it removes most conceivable obstacles from the process and leaves you with no excuses.

Which is how, two days ago, I found myself calling butchers all around Manhattan looking for duck breast.  After speaking to a woman at D’Artagnan in New Jersey, one of the largest duck distributors around and a major purveyor of Foie Gras for the Tristate area, we decided that the Moulard duck was most appropriate for my curing project.  Moulard is the same type of duck they use for Foie Gras, a cross between the Muscovy and Peking varieties (both of which are leaner), and it has the most fat-rich breast, the cut I would be using—what the French a magret .  It is the best option for my project: duck prosciutto .

I chose Duck Prosciutto (also known as Duck Ham, though both of these terms are misnomers culled from the vocabulary of pig charcuterie ) because it’s one of the easiest in the book.  It’s not salami which requires a meat grinder and sausage stuffer, and it’s a relatively small cut of meat—making the chance for error slimmer, and the time frame shorter.  It cures for 24 hours in salt, then hangs for about a week.  Many recipes I found elsewhere say you can hang it right inside your fridge, eliminating the problem of finding a cool, humid hanging space which is often required for the curing.  You end up with a delicious hard-cured slab of meat to be sliced thinly and served on a meat plate, in a salad, or draped over some melon slices. 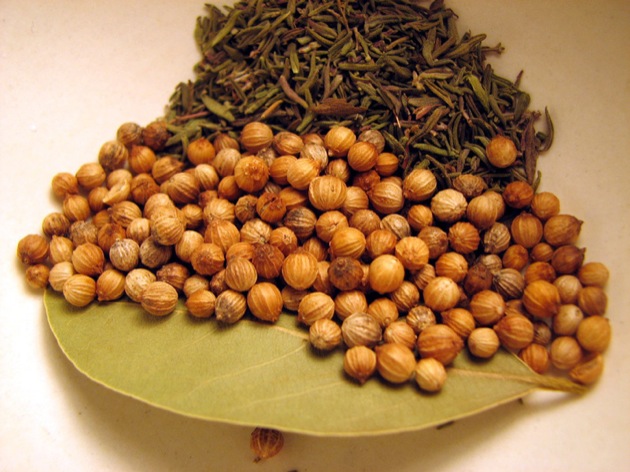 Duck breast can easily be ordered online if not available.  For the magret breast, the kind taken from Foie Gras ducks and the best cut for this process, try Hudson Valley Foie Gras or D'Artagnan .

Adapted from Charcuturie and Gary Danko .

In a container just snug enough to fit the duck without touching the sides (or each other, if you're using two or more), cover the bottom with half the salt.  Add the remaining spices and toss to mix, then place the duck breast fat side up.

Rub some of the salt into the flesh, then cover the breast entirely with the remaining salt, using more if necessary.  Seal with plastic wrap, cover, and refrigerate for 24 hours. 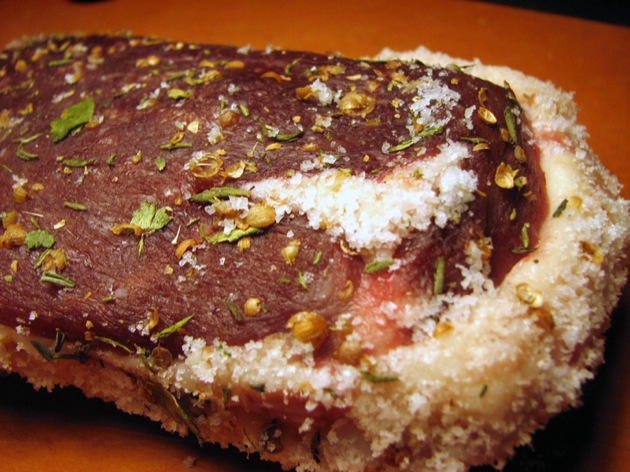 Give it a rinse, then dry thoroughly on paper towels and use a paring knife to scrape off any remaining spices sticking to the breast. Wrap in cheesecloth and tie well. 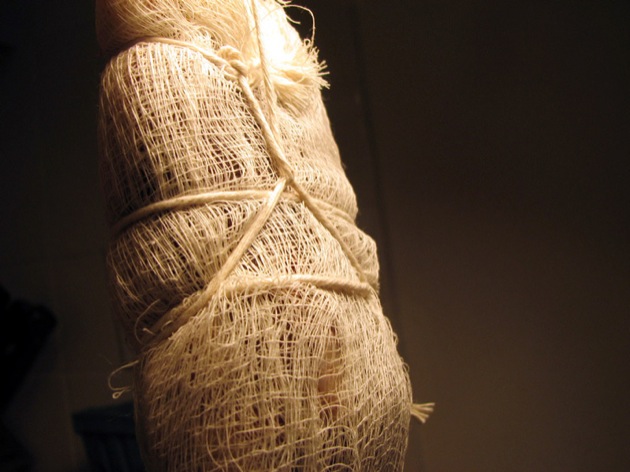 As far as the hanging goes: this book says to hang it in a 50-60 degree, humid environment for one week, or until firm but not hard.  Other recipes I looked at, like this one , say to hang it in the fridge for 2-3 weeks--but those recipes used far less salt for the initial cure, just enough to coat it well rather than covering it completely.  So I imagine less water was drawn out of the meat during the curing process, meaning it would need longer to hang.

I had planned to hang it in the fridge--until I looked at the weather and noticed it was hovering around 52 degrees, perfect for the cure.  So I rigged up an absurd contraption out of a broken laundry rack, some kitchen twine, and leftover cheese cloth to keep out any bugs or animals.  I tried to remember how we made tee pees once in Cub Scouts.  Eventually enough kitchen twine wrapped around all the wood rods every which way seemed to secure things.  I draped some cheesecloth around it and put a metal hook at the very top. 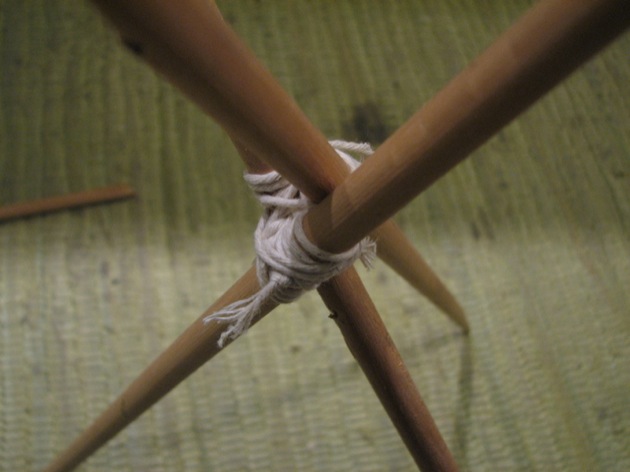 There it is hanging in the entryway of our first-floor apartment, the bottom pinched shut. 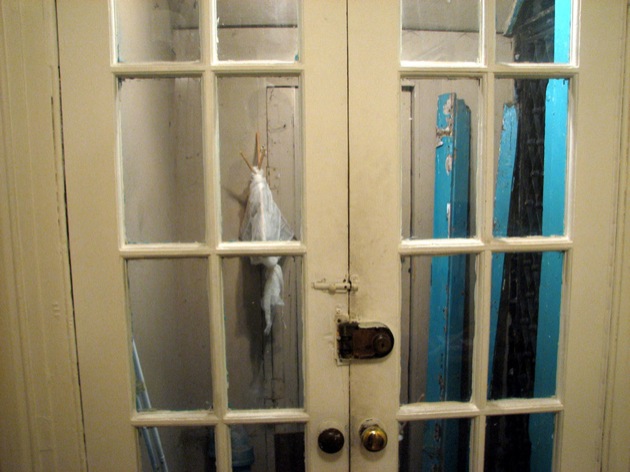 This may be the worst idea I've ever had--the gentle breeze of brownstone Brooklyn won't have quite the effect of a salty Italian countryside--but somehow I wanted my first piece of cured meat to actually see the outside air.  In about a week I'll take it down and check--once the breast is firm throughout with no squishy-feeling raw parts, the drying is done.