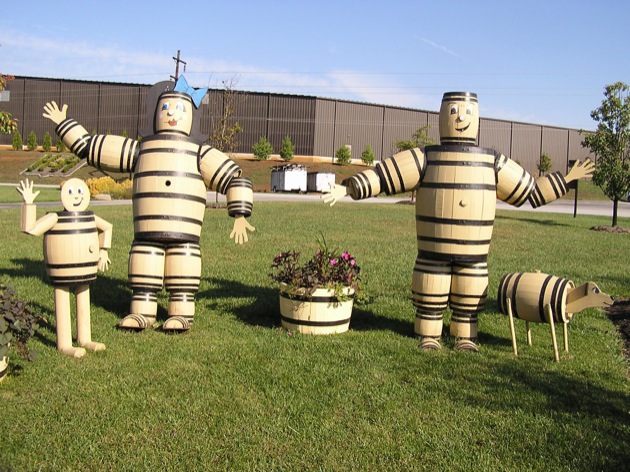 Oh, geez, where to begin.  While Blake was off gallivanting around the eternal city sampling the finer things in life , I was once again down in Kentucky on another bourbon tour.  I'm sure Blake spent his free time strolling along ancient streets admiring priceless art.  Yet, here I was staring down a family - complete with dog - made from whiskey barrels (the one with a bow is obviously the wife).  What has my obsession with Bourbon done to me?

This is the third time this year that I've traveled to Kentucky for the weekend to learn about the indigenous brown liquor.  Even though most of the tours follow roughly the same outline -  we watch a video that explains why their bourbon is the best in the world, see some fermentation tanks, walk through an enormous warehouse where the barrels are aged, and then we finally sip some bourbon at the end - I can't seem to get enough.

Each distillery has its own distinct character, and the tours allow you to see precisely why each bourbon tastes different from another.  My favorite example is how Wild Turkey likes to char the hell out of their barrels to get a pronounced caramel and spicy flavor while Marker's Mark only very lightly chars them to create a smoother sip. It's a surprisingly inspiring experience.

This trip was all about the big boys of the bourbon business, Jim Beam and Heaven Hill.  They produce some of the biggest and best selling bourbons in the world.  But I was worried that their tours wouldn't be personal enough, and that they'd just kind of shuffle us in and out of these huge warehouses and we wouldn't really get a sense of what went into each bottle.

But I don't need much convincing to spend the day cruising around the clean country of Kentucky.  With the leaves changing colors, a nice escape from flat Chicago felt like that perfect excuse to breathe in some air and learn more about my favorite drink. 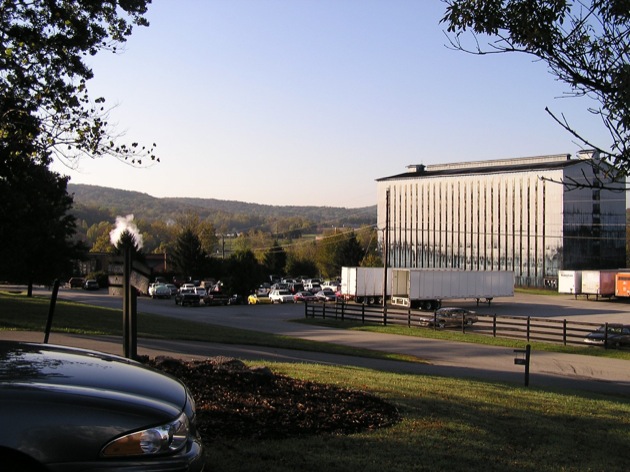 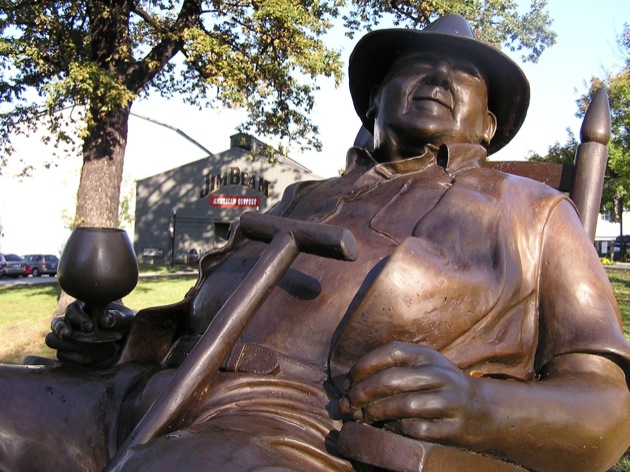 We arrived at Jim Beam early in the morning, at a time in the day when bourbon didn't seem right to think about.  Their tour begins in the American Outpost barn, which is slick and polished on the inside.  They sell all the usual shirts, chocolates, and barbecue sauces that seem to pop up in each tour.  But we had more important things to get to.  I couldn't wait to see how such a large brand made their bourbon. 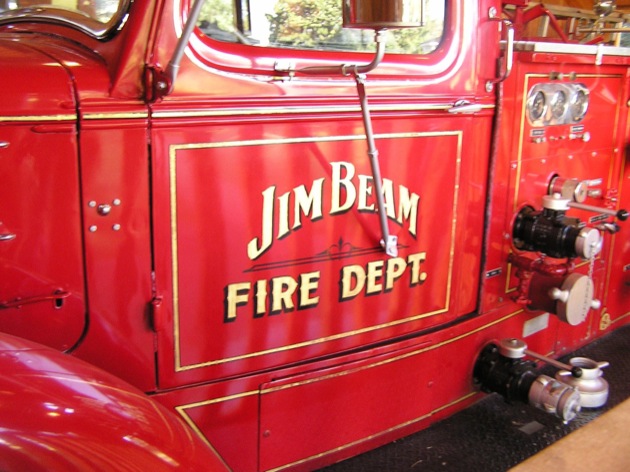 Except, there is no tour, per se.  There is a store and a video, but then the workers just point towards the sidewalk and tell you to follow it around the distillery.  You can peek into a warehouse, look at a dilapidated pot still, a nonfunctional barrel factory, and a fire truck (is that really needed?). 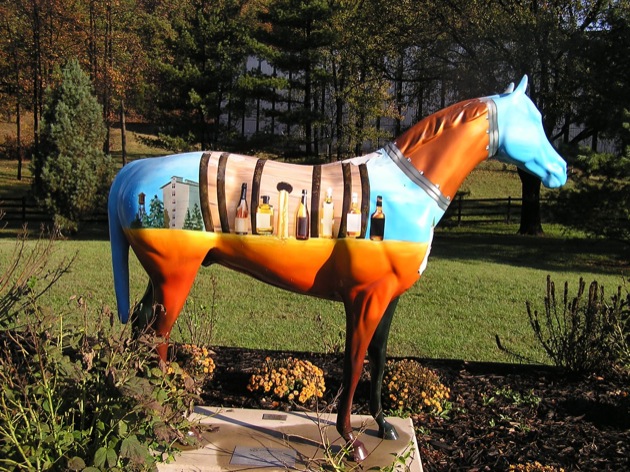 It is, without a doubt, the single worst tour I've yet been on.  With no tour guide to explain what is going on, we just wandered about for a while, read a few plaques, and were done in a matter of about 15 minutes. 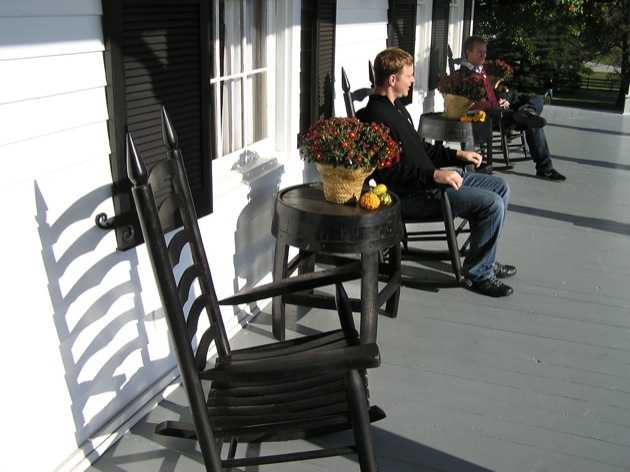 We did get to sample some bourbon in the old Beam house, which is also where we found these awesome rocking chairs.  Knob Creek I'd had many times, but I was kind of impressed by Baker's which I hadn't sipped in quite while.  It has an interesting vanilla characteristic that I enjoyed.

To be fair, the owners have realized their tour leaves a little to be desired.  They are in the process of revamping the whole experience.  In a year, the dismal tour I walked through is probably going to be replaced. If you are planning on visiting the Bourbon trail within the next year, I'd say to skip it and wait until they get their act together. 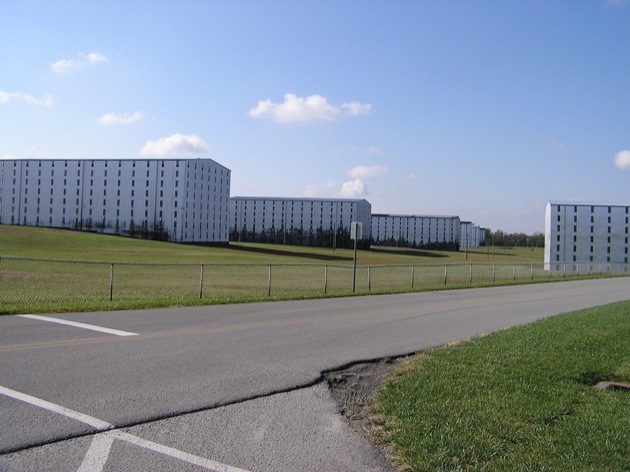 As we approached Heaven Hill I was convinced that it was going to be as dismal as Jim Beam.  Even the view of the warehouses had an ominous vibe.  At least Jim Beam was in a beautiful setting. 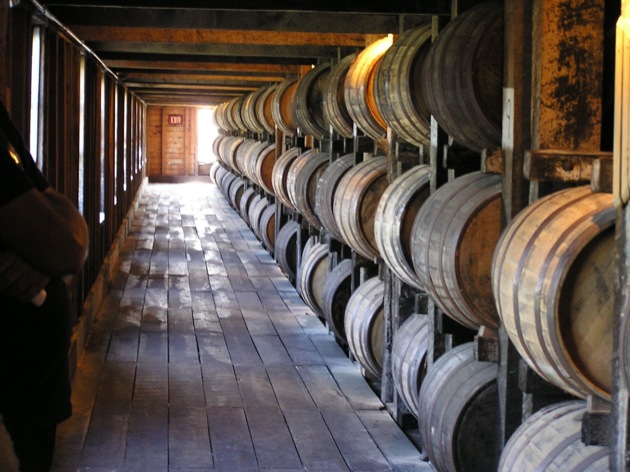 But the tours couldn't have been more different.  The very new tour center is a little gaudy from the road, but inside it is immaculately constructed.  The video is interesting.  The guide is an old sassy lady that loves to drink bourbon.  Even forgetting the minor stumble of the creepy barrel family (pictured above), it's one of the most informative and interesting tours I'd been on. 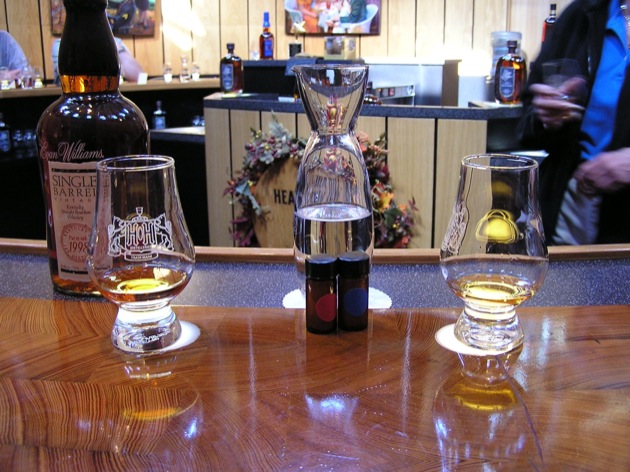 The only drawback of the this tour is that the actual distilling doesn't occur on premises.  Because of a fire a few years back, the actual distilling occurs further north in Louisville.  But most of the whiskey is aged there, and we got sample some of better brands in their gorgeous tasting room. 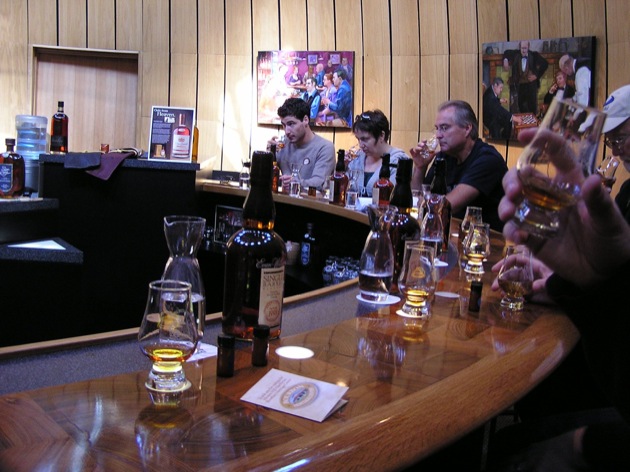 I don't know how I managed to go this long without sampling the Evan Williams Single Barrel, but it's one of my favorite new bottles. 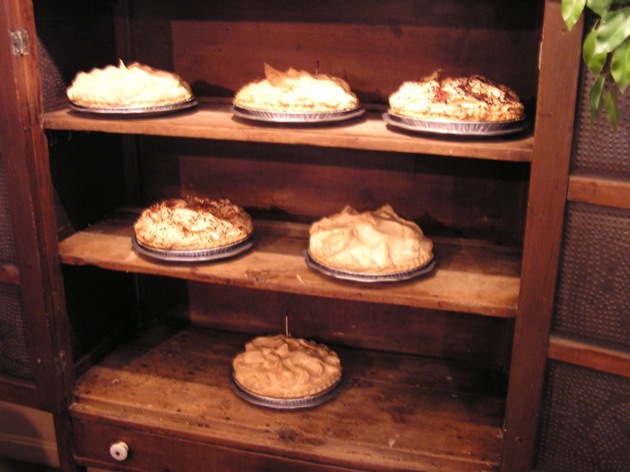 We ended the day of touring at Kurtz Restaurant, where we had a fine lunch and some even better pie.  See those guys just hanging out?  Makes you want to reach out and just swipe one to eat on the road.