Some tricks to improve this classic soup. 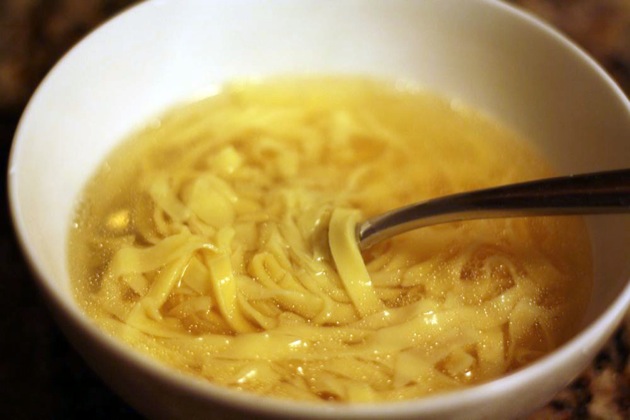 It's cold season, and everyone's coming down with something.  Chicken soup is a nourishing potion, one that seems almost automatic even though I've never really questioned why. Most of the time this tradition involves nothing more than opening a can of Campbell's chicken noodle soup: somehow those minuscule pellets of chicken and mushy noodles are okay once your temperature is above 100.

But when my sick wife had asked for chicken soup personally after she woke up with a mad fever and a sore throat, I figured I should make chicken noodle soup from scratch.

Some 5 hours later, my kitchen was covered in flour, I was sweating profusely from kneading dough, and my poor wife still didn't have anything to eat. How could a dish romanticized for its healing powers for the sick be such a horrible burden to the healthy?

Yet when the soup was done I wondered if I had stumbled onto the elixir of life. Rich, slightly sweet, robust, and very fatty, the stock was a whole meal in each spoonful. My sick wife ate this for dinner and then woke the next day cured. I kid you not!

When I started out, what I really wanted was my mom's chicken soup. Considering she's many hours away, I turned to Arthur Schwartz's Jewish Home Cooking , looking for the ultimate healing recipe, a true shot of what they call Jewish penicillin.

Well, Schwartz is having none of it.

"To put it politely, hot soup, actually any kind of hot soup, promotes sinus and nasal drainage. If that's the case, then chili and vinegar-laced Chinese hot-and-sour soup does a better job."

Yeah, yeah. But my wife and I didn't grow up eating vinegar-laced Chinese hot-and-sour soup. We grew up with chicken noodle soup.

Luckily Schwartz does still have a soft spot for chicken soup, and in his book he explains exactly how to make the soul of chicken noodle soup: the broth.  With his advice in tow, I set off to create the healing elixir that resulted. 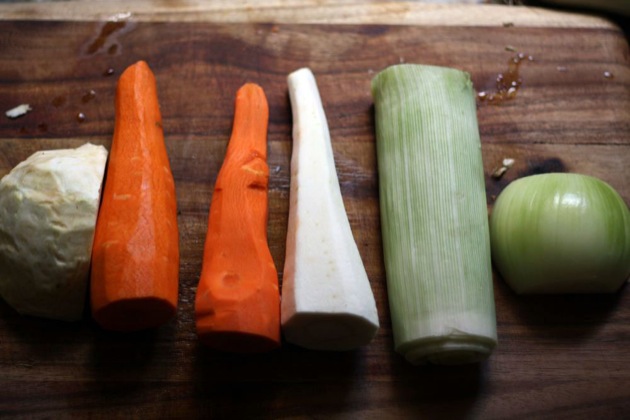 I'm convinced that the most crucial element of the perfect chicken soup is the stock, and that almost exclusively means homemade stock. Stock is always made with vegetables, but it's the kind of vegetables that really sets this recipe apart. It wasn't just the usually group of carrots, onions, and celery. Celery is traded for celery root, and parsnips and leeks are added to the mix. 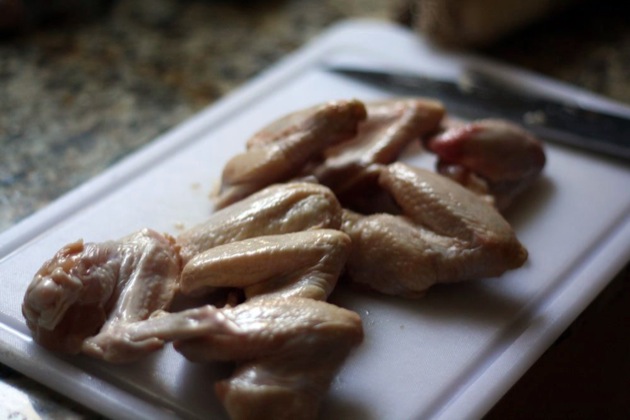 "To get the best chicken flavor and a golden color, I have to supplement a whole chicken with an almost equal weight of chicken wings, back, or feet, or all three."

That, my friends, equals a whole lot of gelatin-rich and fat-laden pieces of chicken, and an equally gelatinous and fatty stock. With these ratios, the stock comes out speckled on top with little shimmering bubbles of fat. Of course, you could carefully skim the fat off the top of the soup, but that would be criminally insane. The fat is what sets this thing completely over the top; it's where all the flavor lies. 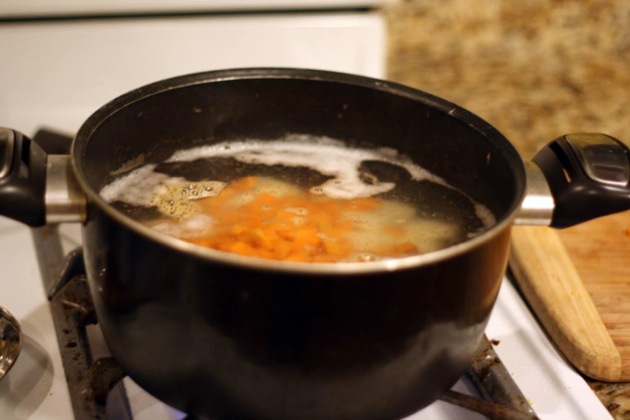 "...all the flavor of the meat will be boiled out and transferred to the soup, and it is not worth salvaging. You have a choice: good soup or good chicken."

Just understand right now: you need to sacrifice a whole bird plus its weight in trimmings (the backs, necks, and wings) for the stock.  Then, they're discarded. You can, like me, attempt to salvage them and use them in some kind of chicken salad, but it will suck, and you'll toss it out. Once they're made into stock, their purpose is through.

That means if you want chicken meat in the soup, you'll need to start with fresh meat. For my soup I bought an extra breast of chicken, simmered it in some water with a little onion for about 14 minutes, then shredded it and added it back to the main pot.

This same rule is true with vegetables: get rid of them once they've done their work. Schwartz does say you can use some carrots leftover from the stock, but he advises against it. It's best to start with raw carrots, slice them neatly, and simmer them in a bit of the stock until they're tender. I also added some potatoes for a little more body.

The only missing piece of advice from Schwartz is on noodles . And that's, incidentally, where my efforts derailed. Not finding a recipe in his book, I picked up one from the Joy of Cooking , and since I didn't have rolling pin I used my pasta maker. The noodles that came out were fine, but they weren't great. My mom's noodles are so superior to the ones I made that I can't really face putting the recipe in here.

I'm just going to buy pre-made egg noodles next time and be done with it. That is, unless I can get my mom to make me some of her homemade kind. 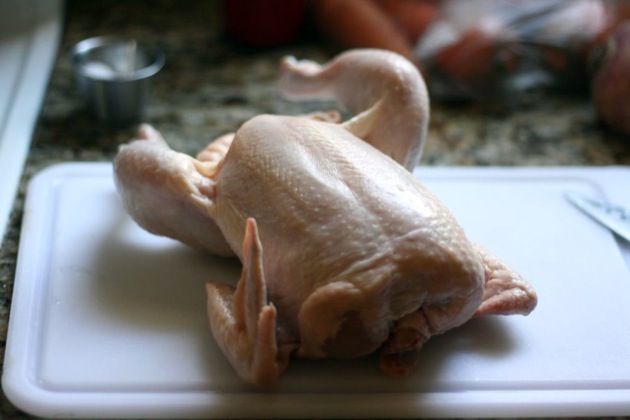 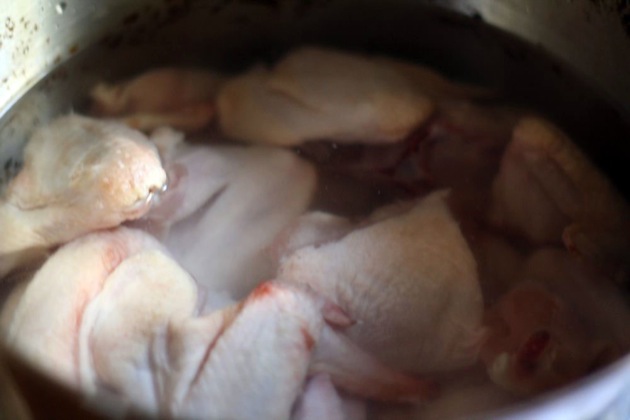 Toss all the chicken into a large pot. Pour in the water and the salt. Turn the heat to high and bring to a simmer. Then reduce the heat and simmer for 15 minutes. 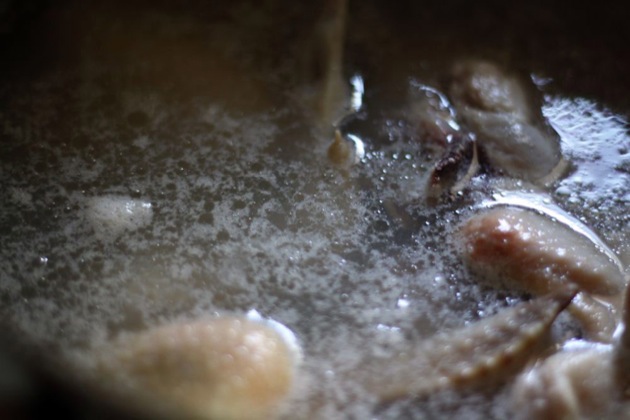 During this time a lot of scum will float to the surface. Skim off with a slotted spoon. 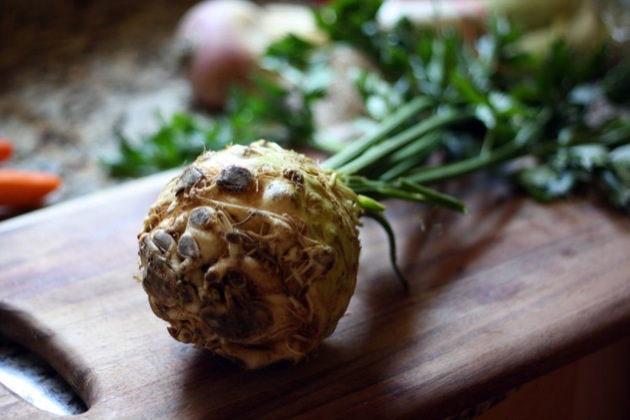 Add the carrots, celery root, parsnip, leek, and onion. Simmer for 3 to 4 hours. With 30 minutes left add the parsley and dill. 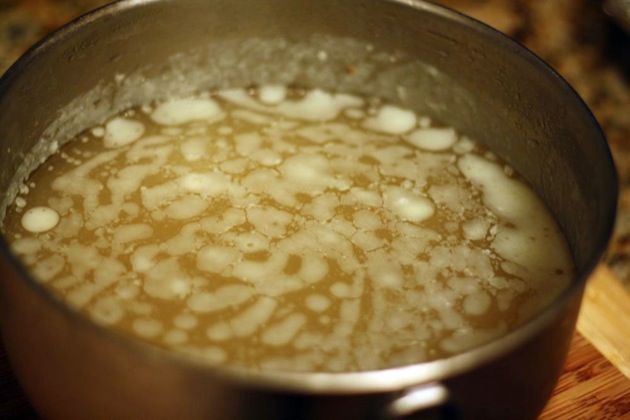 Turn off the heat and let the soup cool. Then stick the whole pot in the fridge overnight. The fat will rise to the top. Skim off as much as you like. Not too much. Strain the stock through a colander to remove any vegetables or chicken parts.

Reheat the stock in a pot.

If you want to add some vegetables, simmer some sliced carrots or potatoes in some water until tender. It took me about 20 minutes. 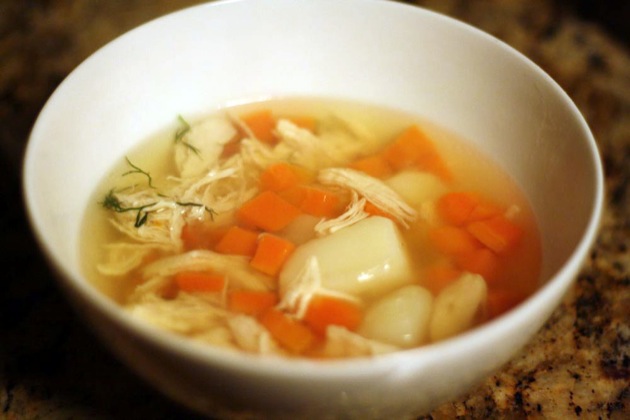 Then add them to the stock and serve. 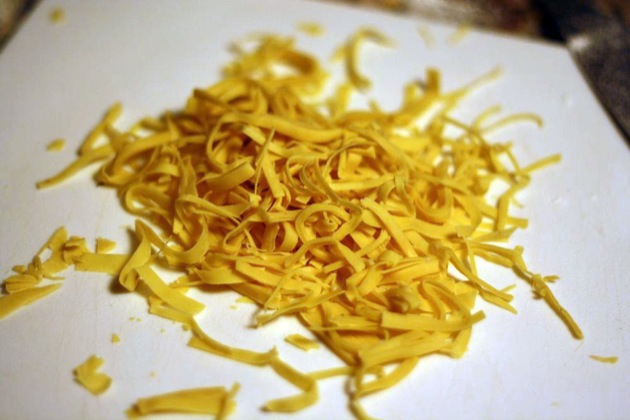 To add noodles to the soup, either make some at home or do the sensible thing and buy some pre-made egg noodles. If you want a recipe check out the Joy of Cooking. 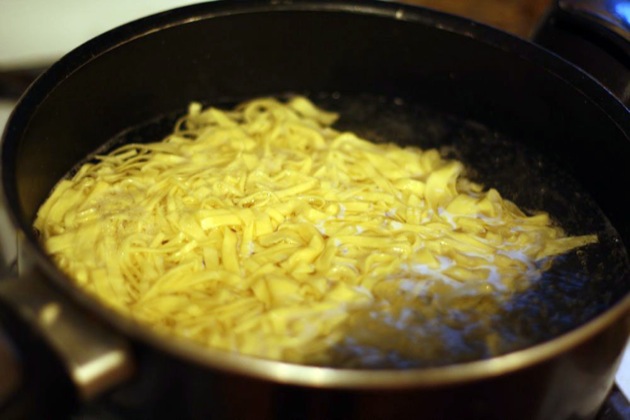 Boil them according to the directions on the packaging. 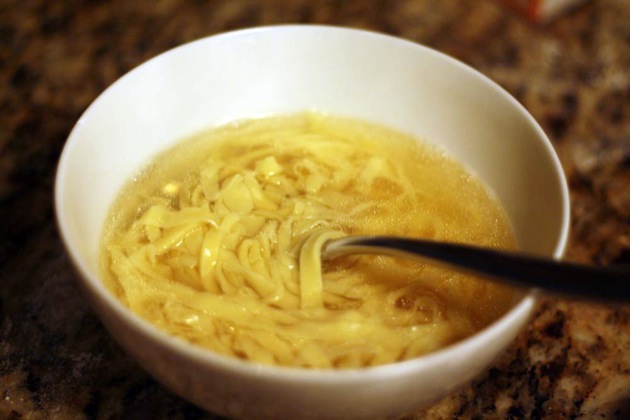 Add them to the stock and serve.