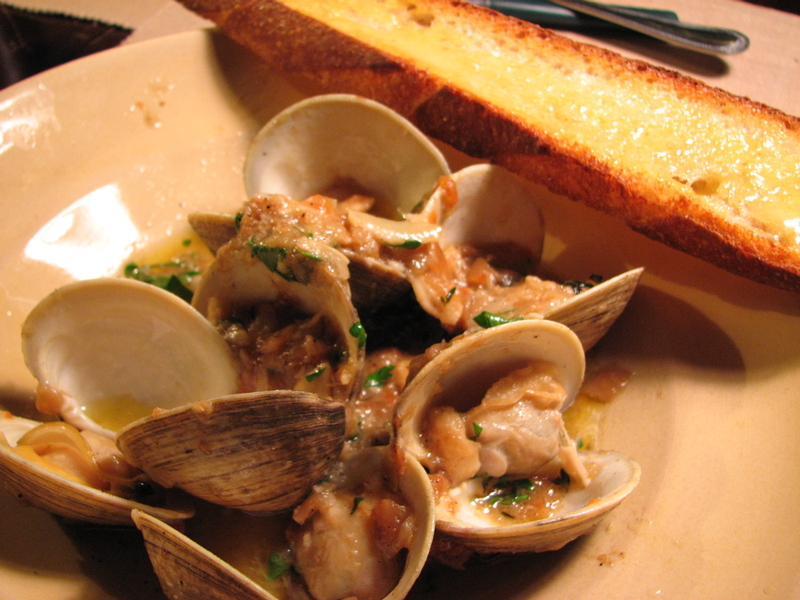 I'm no stranger to clams.  I'm no stranger to the whole bivalve genus.  I think that we've cooked mussels more than any other dish for this website, even going so far as titling a post " Because You Can Throw Just About Anything In the Pot with Mussels and It Will Taste Glorious ."   Clams are cooked much the same way: you make a simple broth with herbs and usually a little butter, toss the critters in the pot, add some kind of wine, slam the top down, and turn it off when they've all opened up. My family has vacationed in the Outer Banks for North Carolina since I was a kid.  It's a little sliver of an island off the coast that's only wide enough for one major road, with houses on either side of it--calm sound towards inland, rough surf facing east.  At least 3-4 times a week we'd head down to the tip of the island and buy fresh clams, literally hundreds of them, and come back to steam them in a broth of garlic and beer.  In later years we started throwing them on the grill without any seasoning, letting them simply be chewy little messengers of how the ocean tastes.  We'd eat them one after the other and toss the shells off the third floor balcony, which we were told helped build up the island (every time there's a hurricane the beach shrinks a little bit). So you understand I've had clams before, many, many times, as fresh as they can be, in a wonderful setting.  But I've never tasted clams like this . The recipe exemplifies Thomas Keller's philosophy of "building blocks" in the kitchen.  It was my original reason for making the soffrito that Nick used in his salted cod stew .  It also calls for garlic confit, which I'll show you how to make during the recipe, as well as aioli, a kind of fancy mayonnaise.  It's these things like homemade stock, brown butter, soffrito, confit--ingredients that take a long time to make ahead of time--which transform a simple meal into a restaurant-quality, exemplary experience.  You can make a lot of it, have it in the fridge, and it keeps for awhile.  Then, with these things on hand, dishes like this would take about ten minutes to make.  The investment of time to make "building blocks" is long (just pick a Sunday afternoon), but it's what makes basic recipes like these truly incredible.  As Keller believes is his mission with Bouchon, it's about taking these centuries-old recipes and making them perfect. I didn't make this perfectly--I forgot how much brine is packed inside those clams, so the dish ended up too salty--but that aside, the richness of and depth of flavor was astounding considering how quickly it came together. Thomas Keller's Clams Marinières Croutons

Serves 4.  I halved it to serve 2. Garlic Confit First, we'll make the garlic confit if you don't have any around already.  If you can, buy a bunch of fresh peeled garlic cloves at the store (but not the jarred kind, find them fresh) to save time.  Make a big batch so you'll have it around (Keller calls garlic confit a "pantry staple").  Cut off the root end of all the cloves and put them in a small saucepan.  Using canola or grapeseed oil (not olive oil--it's important that it's a neutral oil), cover the cloves, making sure they're all completely submerged.  If you have a diffuser (a piece of cast-iron that goes between the burner and the pot to dampen the heat, I used my griddle which also helped with the soffritto ), use it, otherwise get the heat as low as possible.  The garlic should cook gently, with only tiny bubbles rising to the surface but not breaking it.  Stir every 5 minutes or so, cooking about 40 minutes total, or until the cloves pierce easily with a knife. Aioli It's basically a garlic mayonnaise.  Take 4-5 cloves of garlic confit and mash them on a cutting board with salt, to form a paste. 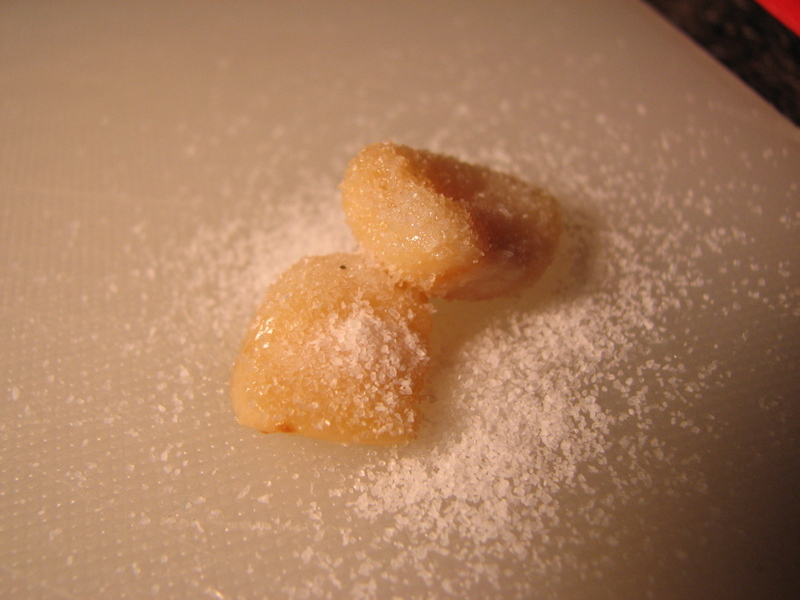 Add them to a mixing bowl with one egg, and whisk together.  Slowly add a combination of canola oil and oil from the garlic confit (one at a time), whisking constantly until the mixture starts to thicken and act like mayonnaise. The Clams Prepare all the ingredients so they're chopped and on-hand, because the clams don't take too long too cook.  Heat the oil over medium in pan or skillet large enough to hold the clams in two layers or less.  Once the oil is hot add the shallots and, as Keller suggests, let them "sweat." 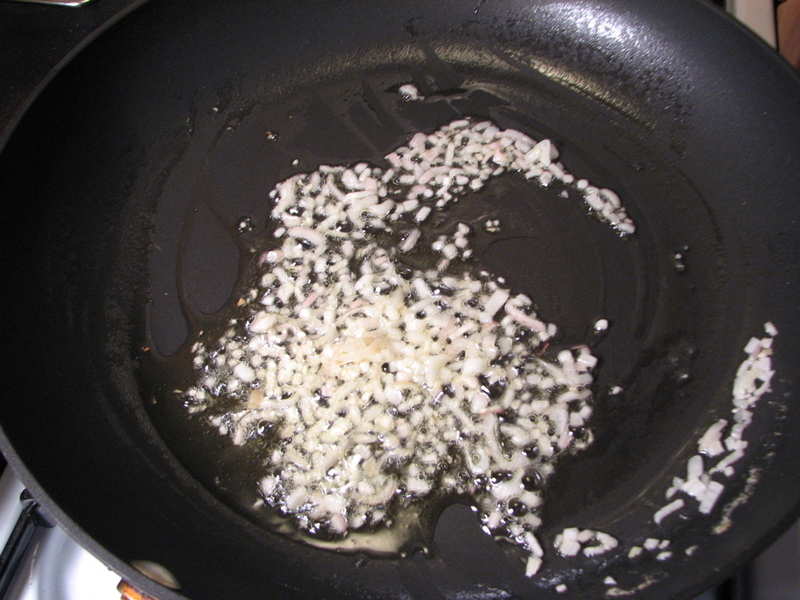 Next, add the thyme, soffitto, garlic confit, and salt and pepper (but be conservative on the salt, since the clams are going to release a lot of brine when they're added.)  In the meantime, take the baguette slices (which should have been brushed with the olive oil and seasoned with a little salt) and put them in the toaster broiler or oven. 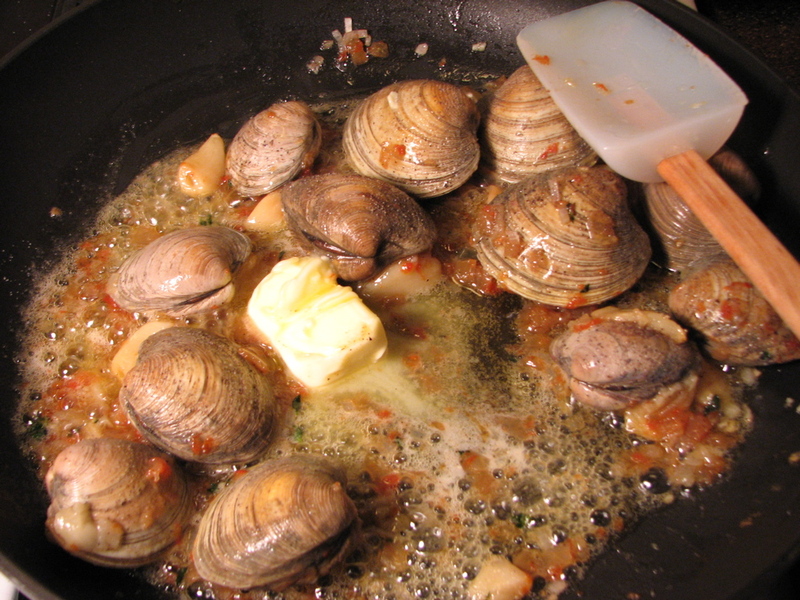 Let the soffritto release it's flavor for a minute or so, then add the butter, turning the heat to high.  Toss the clams in the soffrito mixture for a minute or so, dump in the wine, then slam the cover down.  Keller says the clams will open in a minute or so, but mine took a lot longer--perhaps they were a different type of clam.  Regardless, let them steam for awhile, opening once a minute to check and stir everything.  All the clams have to open before you're done (unless there is one that's misbehaving when all the others are long-open--it's never going to open, so forget about it and don't eat it). Once the clams are all open, toss in the parsley and some black pepper, toss, then pick out the clams with tongs into however many shallow bowls, dump the broth over them, paint the toasted baguette with aoili, and serve alongside with a fork and spoon.