Two pickle recipes that take less than a day to make

You know how you see scallops at the fish market and think to yourself, I could sauté those with?...When I’m at the farmers’ market, I see bushels and baskets of potential pickles...
- David Chang, Momofuku

It's been over three years, and yet I can still vividly remember an appetizer I ate at Momofuku Ssäm Bar . In a meal filled with gloriously fatty meat laced with spice, this small plate of cucumber and radish seemed to lighten the load, and allow me to eat far more than was normal or right. But that's kind of selling them short. Because however much I'd like to deny it, they may have been my favorite bite of the whole meal. Naturally I wondered what went into them, but it wasn't until I picked up David Chang's cookbook that I found the recipe. This is what I saw:

5 to 10 minutes! Last time I made pickles I stuffed cucumbers into a jar and sat them in the fridge for three weeks. They came out crunchy and tangy, but they took THREE WEEKS! By then the growing season for cucumbers was nearly over, and I didn’t have any time to adjust and tweak. How about some immediate satisfaction? 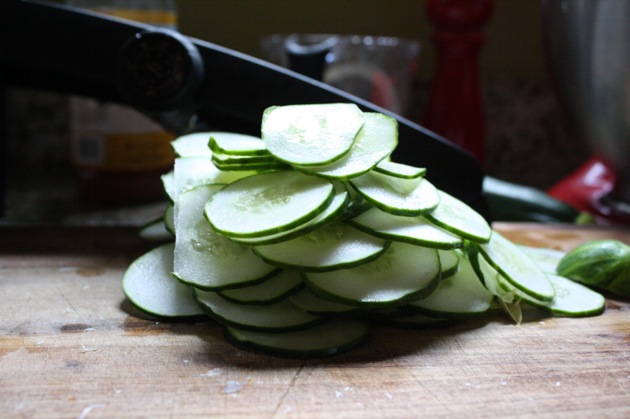 I thinly sliced some cucumbers and then combined them with one tablespoon of sugar and one teaspoon of salt. They hung out for 10 minutes, before I gave them a taste. They were slightly sweet, still crunchy, but a touch salty.

So I followed Chang’s directions and rinsed them off in a colander, dried them on a kitchen towel, and then added a bit more sugar. Five minutes later I had little crunchy quick pickles which I ate next to a huge plate of spicy Asian noodles. How fun is that?

But complex pickles don’t need to take long, and they don’t need to be held back by what is traditionally thought of as a pickle. I’ve been obsessed with these zucchini pickles I had a Mado a few weeks ago. They were so simple --the best things at Mado always are-- and they perfectly balanced a heavy plate of pâté. Why hadn’t I thought of that? Zucchini and squash are busting out at the farmers’ market, and here was something new to do with them besides making ratatouille (which is an admittedly delicious dish). Plus, they were pickles that weren’t cucumbers. 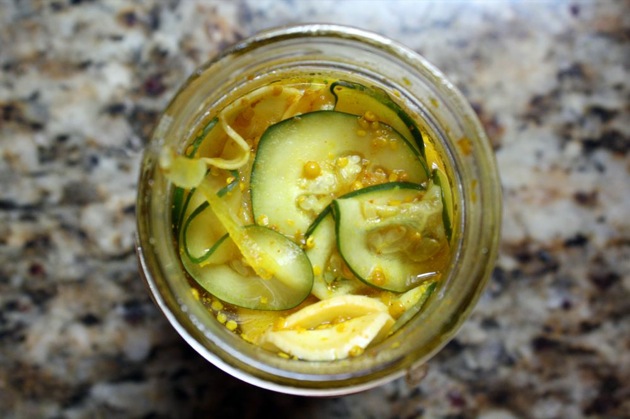 I found this stunning recipe from the L.A. Times for Zuni Cafe’s zucchini pickles . It takes a day to make, which compared to three weeks is like a blip. Just make them the night before and enjoy them for a week in the fridge.

It’s telling that Blake just wrote about pickles last week , because I’ve seriously caught the bug, too. So many vegetables have a new life when pickled, fresh and addicting. And they don’t even need to take long. 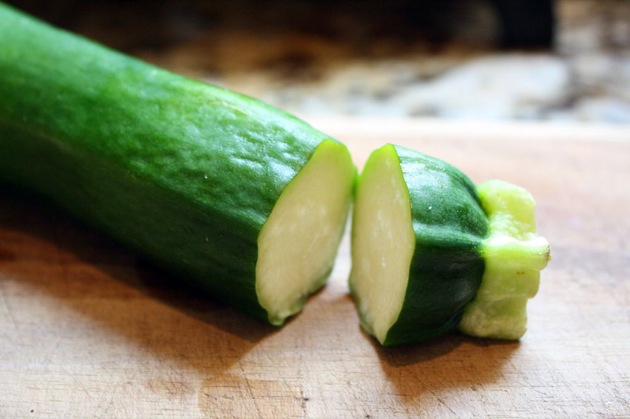 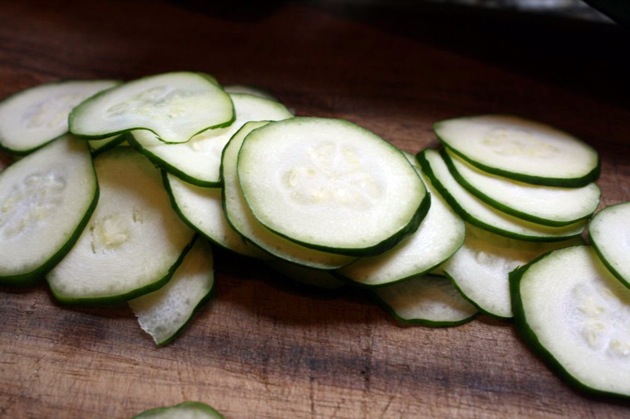 Remove the stems from the zucchini and squash, and then slice them one-eighth-inch thick on a mandoline. Hopefully you have a mandoline. Then remove the skin from the onion, and thinly slice it on the mandoline, too. 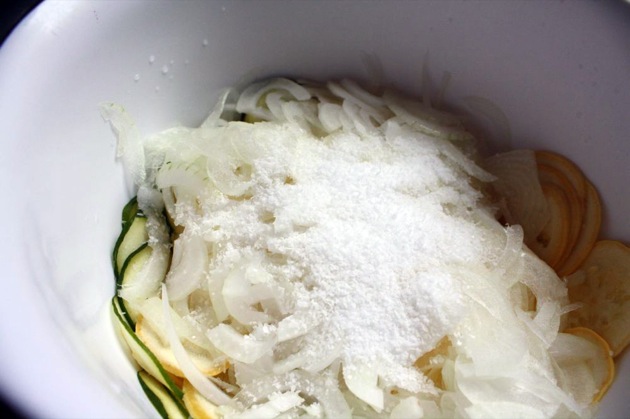 Combine them in a large bowl and toss with the salt. 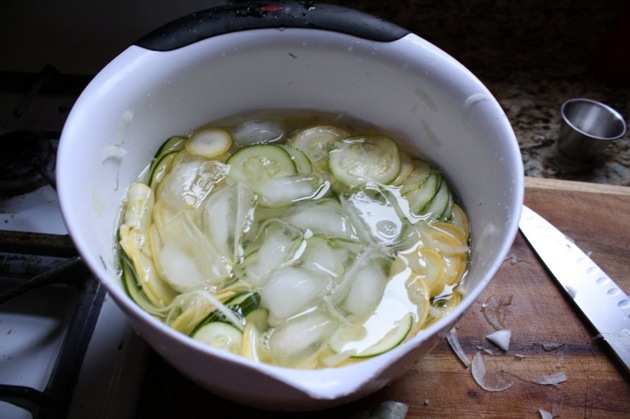 Cover with cold water, and place a few ice cubes in. Stir to dissolve the salt. Let everything hang out for an hour. 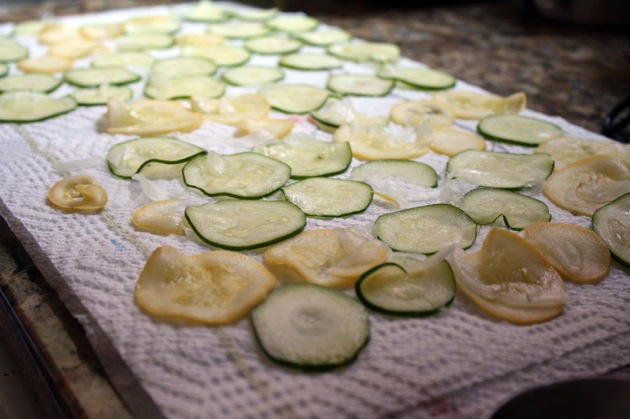 Then drain and pat dry on some paper towels. 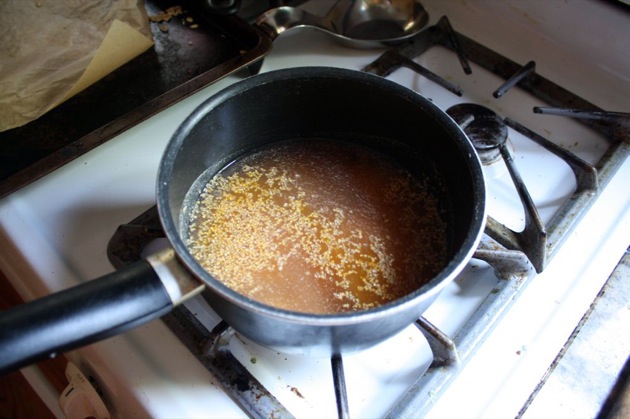 Meanwhile, add the vinegar, sugar, dry mustard, mustard seeds, and turmeric in a small saucepan. Bring to a boil, then reduce the heat to a simmer and cook for three minutes. Turn off the heat and let it cool. 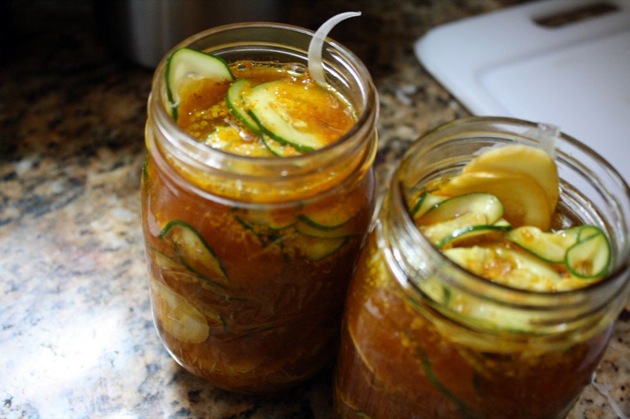 Transfer the zucchini and squash to ball jars and pour over the brine. Seal the top and set in the fridge for a day.