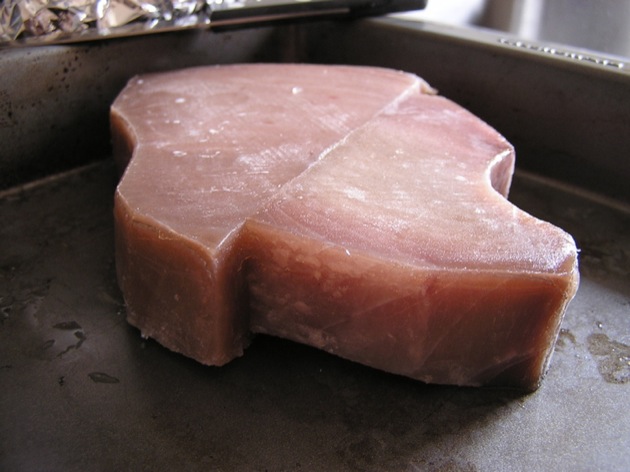 I wondered often about what I'd have to give up, culinary speaking, when I moved from New York to Ohio, but most my fears have proved to be unwarranted.  There is a fantastic farmer’s market and utterly divine regional specalities (try Jeni's ice cream!).  But fish has been hard.  Most of the stuff in grocery stores looks decent, but it has been previously frozen and thawed at the store.  There are a couple fresh options, but most of those are prohibitively expensive.  However much I’d like to be angry, it does make sense.  Ohio is far from a ocean, and it shouldn't have fresh fish teeming out of every store.  The costs of importing the fish and the amount of fuel that would take to transport it make it an unrealistic everyday option.

It was becoming a problem.  I don’t think I ever bought frozen fish in New York.  I might have been sneaked one unwittingly on occasion, but I believe the majority of it was fresh.  Our local fishmonger could tell us were all the catches came from, and Fairway had whole fresh fish available for the carving.

While we were walking through Trader Joe’s we weren’t looking for any kind of answer.  But when we passed the frozen section we came across a whole freezer stocked full of fish.  Instead of hiding the fact that they had been frozen like the grocery stores did, they proudly advertised that these fillets had been frozen only once.  The more we thought about it, the better that sounded.  This fish had been frozen right off the boat, and would be thawed only when we were ready for it.  All the grocery stores around the area could have thawed the fish and refrozen it any number of times, diminishing the flavor each step. 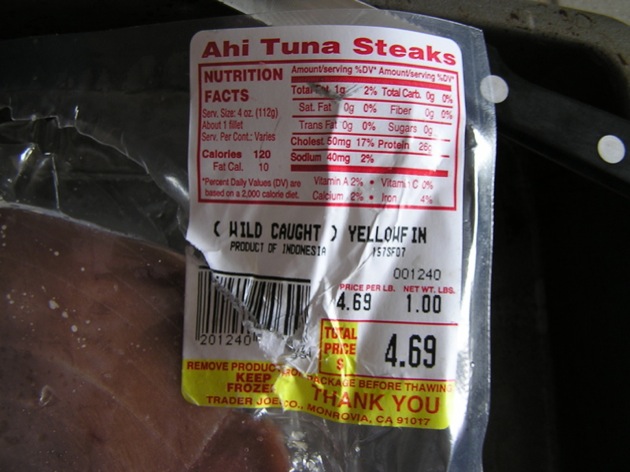 Better still was the price.  Fresh tuna steaks can run anywhere between $10-$20 a pound, but these hard chunks were a cool $4.69 a pound.  If they were bad we could just throw them away, all for the price of a couple cans of Starkist.

While they lacked the bright red color and didn’t reach the same heights as their fresh counterparts, they were very good--surprisingly good, actually.  We sauteed them over high heat exactly like we would a tuna steak, and they held up perfectly.  They also thawed completely in about an hour, which is much better than those rock hard chicken breasts can do with twice the time.

This is such a new phenomenon to me.  I presume it’s just business as usual to half the population of the country.  But I'm thrilled with the option of buying great fish at low prices, even if the label does say it was caught in Indonesia.  Does anyone else have any opinions of frozen fish?