Based on the potato, gnocchi is the ultimate pauper's meal--but it sure doesn't taste like it 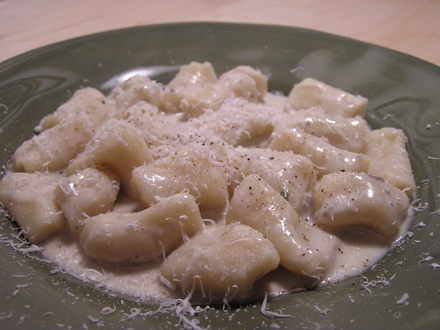 Gnocchi.  No idea. For years this has been the unpronounceable dish on the menu that starred me down and begged to be blurted out to the uproarious laughter of the seasoned waiter.  "Did you hear what he just said?" Hell, I didn't have any idea what it was.  Was it a type of pasta?  Dumpling?  Did it have a filling?  This feeling of inadequacy kept the recognizable dish on the menu page and away from my plate. But with my parents in town we visited the delightful little restaurant Cellini's, and there, to put all the confusion to rest, my mom ordered the Gorgonzola gnocchi.  ny

.  No-key.  It was beautiful. Once the word comes, it jumps up and titillates the tongue.  It's a light, breezy word, and good gnocchi should be the same.  It's the potatoes.  Gnocchi has all kinds of intricacies, but it's the lowly potato that the recipe with its contrasting qualities of lightness and creaminess, like good macaroni and cheese with out the heart attack.

Like most humble creations, rules abound.  Nearly all of the recipes call for potatoes, though some swear against. There is Italian gnocchi, French gnocchi, and even Argentinean gnocchi which is given it's own day of the month, the 29th, which wikipedia explains was the day before payday when a cheap, hearty meal was needed most. I could get into that. Larousse Gastromique went into a detailed and labor intensive version that I'm sure is quite heavenly.  But it was a Sunday night, and the last thing I wanted to read about where the different variations of the recipe of the years.  I settled on a recipe taken from both the Joy of Cooking and Epicurious.  This recipe takes a while, but requires minimal effort, few ingredients, and feeds plenty.  I halved the recipe, thinking I'd have enough for a very large meal for myself.  Then roommates started wandering in after the long weekend.  They see me hand rolling gnocchi.  I become nervous.  "No guys, this is my gnocchi!" I wanted to say.  But as my hands kept rolling, the gnocchi stretched out over the cutting board and on to the working surface.  To cut them all I had to use my largest knife.  We almost had leftovers. To save having to label this as some regional gnocchi, I am going to call this Upper East Side Gnocchi, because that's where I bought all ingredients, got my inspiration, and where I slaved away in my small kitchen making it.  And I'm poor, too. Gnocchi with Gorgonzola Sauce 4 large russet potatoes 1 large egg 2 cups all purpose flour 1 teaspoon salt 1/2 teaspoon ground black pepper 1/8 teaspoon ground nutmeg 1 cup whipping cream 3 cups crumbled Gorgonzola cheese (about 13 ounces) Grated Parmesan cheese Adapted from Epicurious . 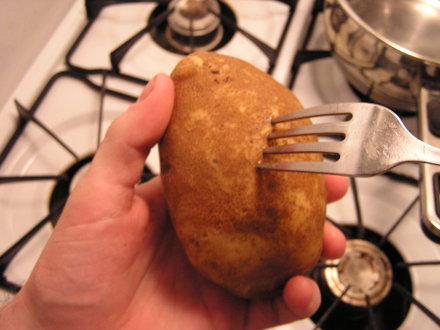 Preheat the oven to 400 degrees.  When ready poke some holes so the skins don't blow off and throw the spud in the middle rack and cook for an hour. 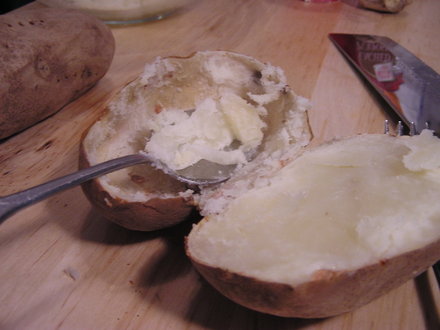 When the potatoes are done remove, and taking a massively large knife, cut in half.  Scoop the insides out with a spoon and place in a bowl, leaving the skins behind.  Now is a good time to start boiling some water in a large pot.

Most recipes suggest using a potato ricer to finely break up the potato, and they are probably right.  The creamier the texture the better the gnocchi.  For the rest of us, using whatever utensils are close at hand, mash the potatoes until smooth.

Add the egg, salt, pepper, and nutmeg and mix.  Slowly start to add the flour until the mixture starts to form into a workable piece of dough, albeit potato dough. 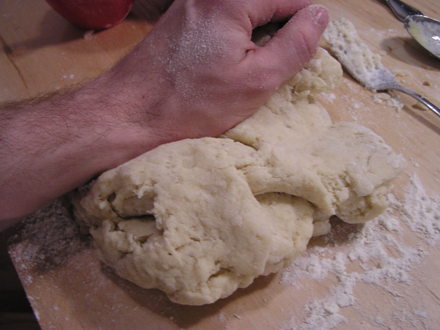 Lightly flour a flat, clean surface, and need the dough until it vaguely resembles a ball of dough in appearance.  Divide the ball into eighths.

Take one of the pieces and roll it out until it forms a 1/2 inch rope. 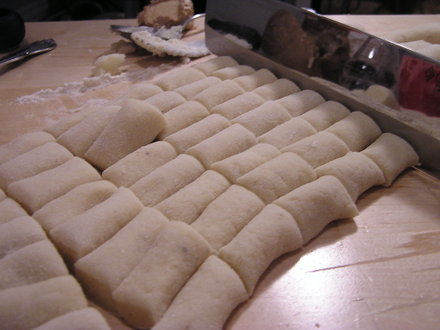 Cut the ropes into 1 inch pieces.  I found the easiest way is to place all the ropes side by side and cut them with an excessively large knife. 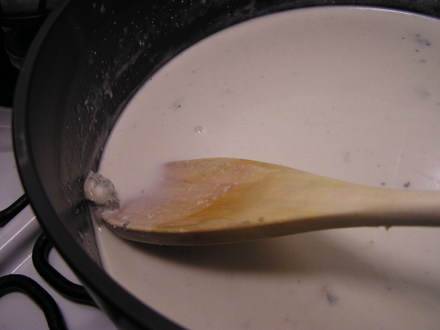 The gnocchi will cook quickly, so now is good time to start the sauce.  Pour 1 cup of the heavy whipping cream into a pan and turn it up until it starts to simmer, then drop the crumbled pieces of Gorgonzola cheese into the pan. 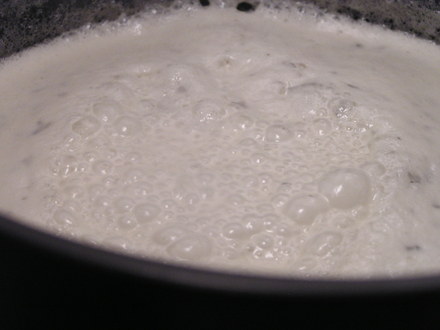 Let it simmer again until the sauce has reduced for about 5 to 10 minutes.  The creamier the better. 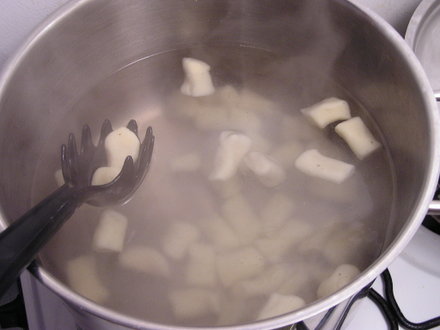 When the sauce is ready hopefully your water has started to boil.  Simply drop the gnocchi into the water and when they float to the top immediately remove with a slotted spoon.  This is absurdly quick and painless, and should take maybe a minute.  Place on a plate, top with the sauce, Parmesan, and black pepper. Serve immediately to whoever wanders into your room. *** Many of the recipes suggested scoring the gnocchi with a fork before boiling it.  I experimented with a scored and a regular and proved that neither was any better and one was much easier to do (or in this case, not do).