Homemade Gnudi from The Spotted Pig 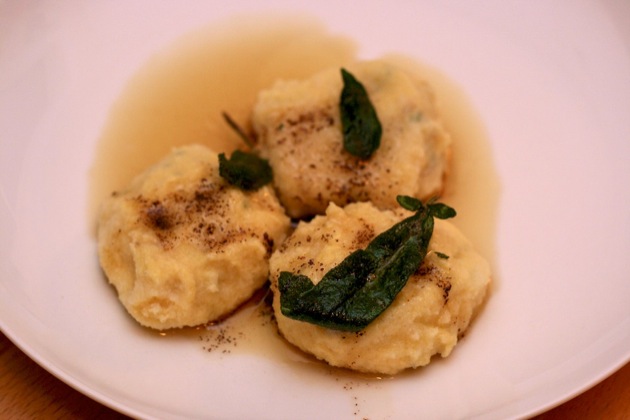 I'm pretty sure the word "gnudi" wasn't on anyone's radar until they were served at The Spotted Pig in New York, which was when they became a food dork household name. In Italian, "gnudi" means what it sounds like in English: naked. It refers to little pasta-like dumplings that are "naked" of their pasta wrapper, raviolis without anything to enclose them. Gnudi are a bit like gnocchi, but they have far less flour and so are pillowy in the way that gnocchi never are.

The Spotted Pig has gotten more press than it will ever need, and I don't feel the need to sing its praises too lengthily here. It's an outstanding New York restaurant serving food that has drawn crowds and accolades consistenty since it opened six years ago. I had more than a couple outstanding meals there when I lived in New York, the highlight of which was a night when Fergus Henderson had commandeered the kitchen , and I first tried his classic dishes like roasted bone marrow on toast. But as for the restaurant on a regular day, there are two dishes that it is especially famous for. A bloody burger topped with Roquefort cheese and the dish at hand.

The way the Spotted Pig serves them is typical of its cooking style: absurdly rich, in a bath of brown butter, with little regard for balance. As if molten balls of ricotta cheese weren't rich enough, they top it with brown butter and a grating of Parmesan.

Over on Serious Eats' Burger Lab column, Kenji recently reverse-engineered a Spotted Pig burger that looks pretty darn good. The gnudi is a bit more of a mystery. Though public versions of the recipe have surfaced, most have agreed that they aren't the "real" recipe. The process they use in the restaurant is hidden not only from the public, but from most of the kitchen staff, according to an intern who worked there.

So it was a little surprising to be flipping through Earth to Table , a beautiful cookbook of essays and recipes about slow food and seasonal cooking, and came across a recipe for gnudi. And not just any recipe. "We were able to take some of our staff [to The Spotted Pig] and discovered the secret to their 'naked pasta,'" they note casually in the recipe's headnote. Then they proceed to demonstrate how they're made. 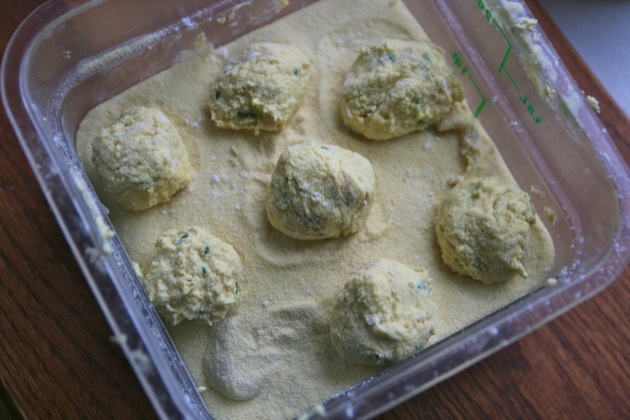 All I know is this is a fantastic technique for making delicious clouds of ricotta heaven. Whether it's the way they actually make them at the Spotted Pig doesn't really matter. (For one, they use sheep's milk ricotta, which I wasn't able to find anywhere). It's been awhile since I've eaten them and a side-by-side comparison would be necessary. In the end, it's not the point: what matters is the ingenuity of this technique.

It starts out as you'd expect: a mixture of ricotta, Parmesan, eggs, and nutmeg, shaped into balls. But then the trick: rather than coat them with flour and prepare them for cooking, you bury them in semolina and let them sit overnight. While they rest, the moisture in the filling mixes with a layer of semolina flour, creating a thin pasta exterior that will solidify when they are boiled.

When you eat them, the molten ricotta interior bursts decadently onto your tongue, which is why they are so impressive in the first place.

Here is a step-by-step for the process from start to finish. This technique could be used with any number of fillings, I'm thinking, like a pureed butternut squash or anything you'd normally put into ravioli.  As long as you can roll it into balls and there's enough moisture, a pasta coating should form. 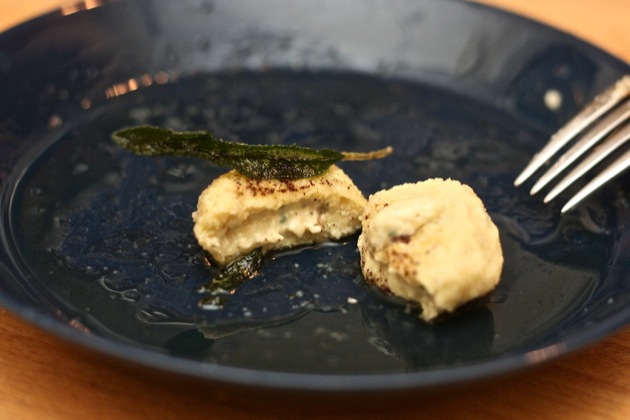 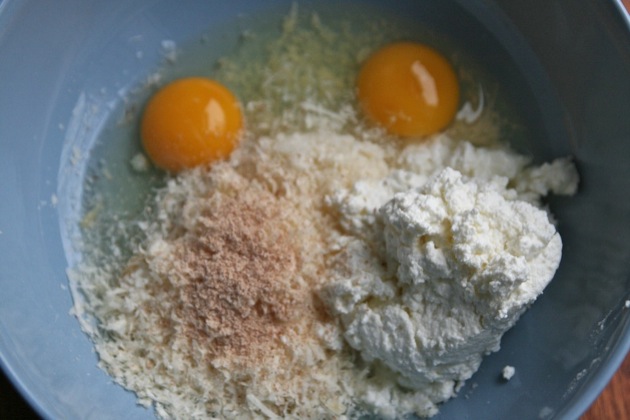 Combine the first 5 ingredients in a bowl and whisk vigorously to combine. The mixture should be light and airy when you're finished. 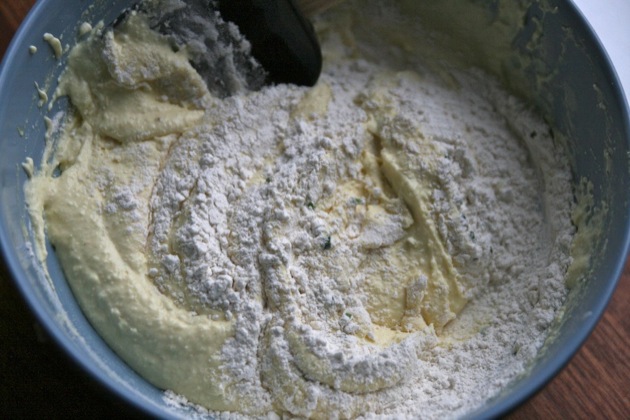 Next, fold in the 1/2 cup of flour until it is combined with the ricotta mixture, adding more flour by the tablespoon if needed so that the mixture isn't too sticky to roll into 1-inch balls.

Using floured hands, roll the ricotta mixture into balls and place in a bowl or dish that has 1/4 inch of the semolina sprinkled on the bottom. Arrange the balls so that they are not touching each other or the sides. When you have a layer, cover the balls completely with flour and begin another layer. Finish by completely burying the ricotta balls and transfer to the fridge. Leave overnight.

Carefully unearth the gnudi and place on a rimmed baking sheet. The flour that remains can be sifted back into a container to use in the future. 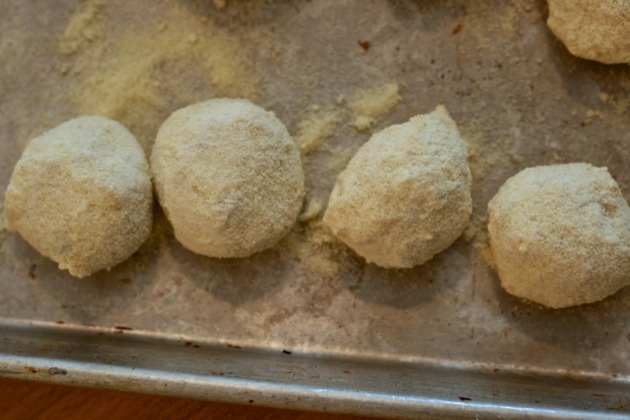 Allow the gnudi to come to room temperature, and in the meantime prepare the brown butter and bring a pot of salted water to boil. 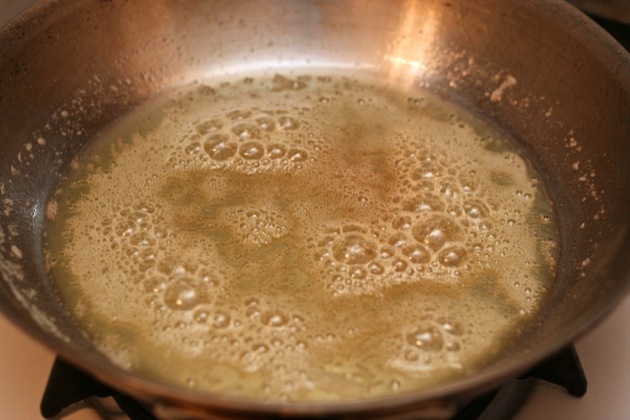 In a skillet, melt the butter over medium-high heat. Watch it carefully, and when the butter solids begin to brown and the butter is foamy (above), add the sage leaves. Just a few moments longer on the heat and the butter should turn a nutty brown color. Don't overcook it to avoid introducing any bitter flavors. 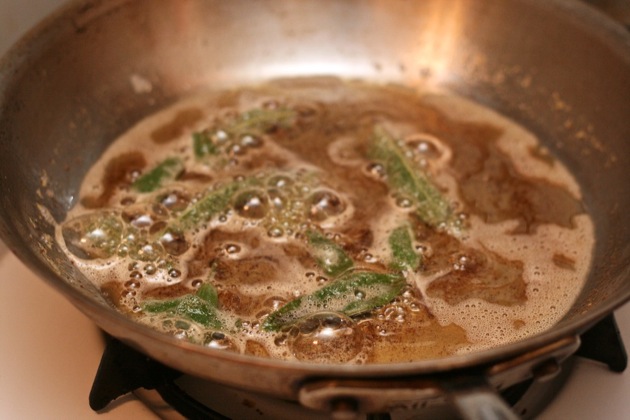 Carefully transfer the gnudi to a pot of salted boiling water and cook until they float, about 1 minute. 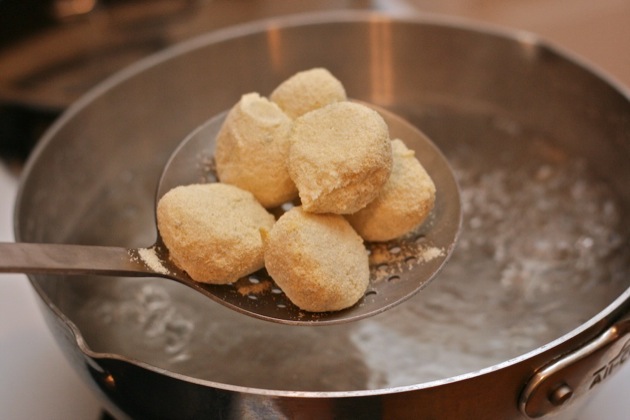 They don't need long at all, and the pasta coating can turn tough if they are in the water too long. 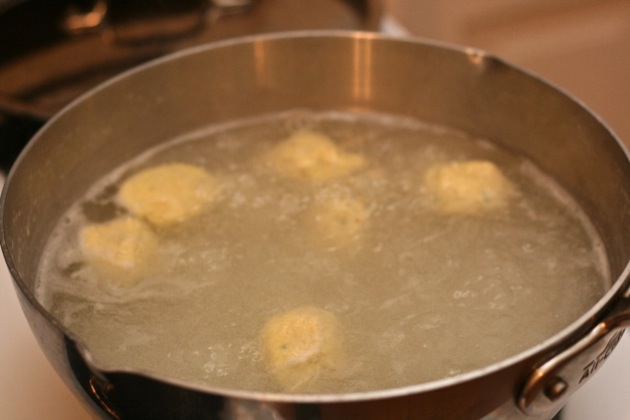 Remove them with a slotted spoon to drain, and serve with the brown butter and crisped sage leaves. Grate Parmesan over them, if desired. 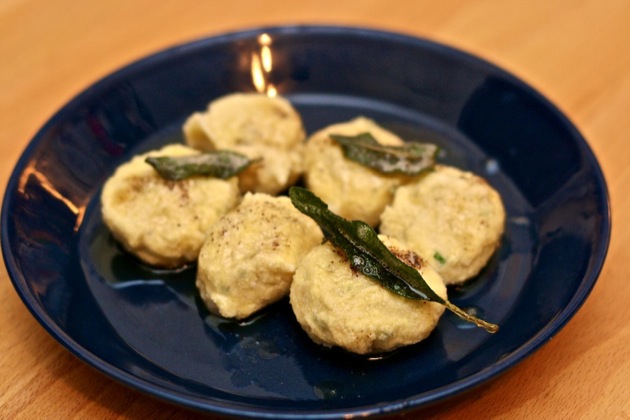