Homemade Guanciale, the Verdict Is... 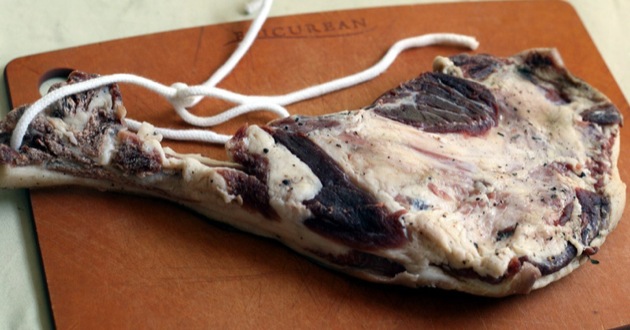 My most ambitious meat curing project yet recently emerged from an unplugged fridge in my living room.  It was a pig cheek from a heritage-breed pig, also known as the jowl, which was salted and seasoned with sugar, black pepper, and thyme leaves, then left in the bottom of my real fridge for a week to release moisture.  After that, I hung it to dry in the unplugged fridge for three more. It would become a Roman bacon, called guanciale , which is prized for its superior flavor, texture, and fat marbling.

My project was an epic battle against the antagonistic conditions of Brooklyn apartment curing in June without a proper drying chamber. First it was too warm and humid; then when I tried to fix that, it was too dry.  I watched daily as the cheek released moisture, grew stiff, then hardened slowly until the skin-side had developed a hard patina that you could knock on like a wooden door.

Under this surface, I had little idea what I would find upon slicing into it.  Would it be green inside?  Soft and uncooked?  Hard as ever and totally unusable? It was a hunk of meat that had never been heated above room temperature, was weeks old, which I'd let hang around unrefrigerated in my living room.

There were days when I thought all was finished.  When I returned from a weekend away, the closed fridge was holding jungle levels of humidity and temperature, just where bacteria likes to live, and an unfriendly mold had started growing on the jowl's surface (I scraped it off and wiped the whole muscle down with heavily salted water, and it didn't return).  Fearing more mold, I left the door open the next time I left town, and the humidity plummeted, so some parts of the meat became over-dried, leaving a crusty, unusable surface, especially along the thinnest part near the top.

So I emailed Ruhlman, author of Charcuterie , for his advice.

Thankfully, he didn't seem too worried: yes, it had probably over-dried, but all I needed to do was to wrap it in plastic in the fridge, then when I cooked it, start the guanciale slices with a little water in the pan to get the fat rendering.  Any parts that were too dry--like the "dessicated" piece at the end--can always be used for stew. "You're going to get most of the great guanciale flavor from the curing," he wrote, "so unlike for dry cured sausages, drying isn't a critical phase of guanciale, in my opinion."

I had no choice but to slice into it.  If it failed, it failed; I knew I'd learned a few things along the way. 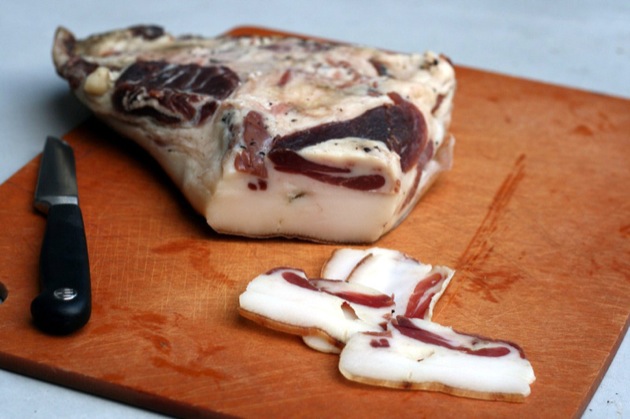 Things seemed...normal.  Inside, the meat had a glossy surface, mostly fat with lines of meat, and no mold.  It looked pretty much like a fatty bacon.  I took my sliced some pieces off the end, cut off the very hardened rind, heated a skillet with a little water to help the fat render, then fried it and ate it.

And here I am!  I'm still alive, writing this blog post.

The taste? Was rich and porky, far more piggy than American (belly) bacon; eating it right out of the skillet without anything else was remarkable.  That said, it pressed the limits of tolerance for porky flavor and fat; a little goes a long way.  I can't really see this appearing on my breakfast plate next to some eggs.

But the reason I set out to cure guanciale in the first place is for its role in pasta.  Specifically, a trio of pastas that are all related but different: Pasta alla Carbonara, Pasta alla Gricia, and Pasta alla Amatriciana.

Sometime soon, once I've cooked all three, I'll report back on how the guanciale fairs in these dishes. 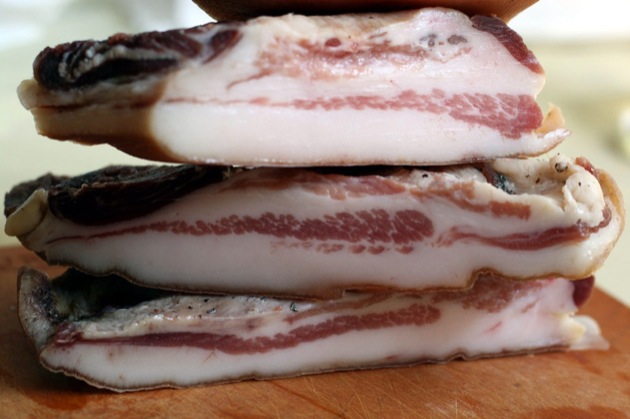 For now, I've sliced it into manageable blocks, wrapped them tightly in plastic, and frozen them.  I should be set for quite some time, as a little guanciale goes a long way.

It's not easy to find pig cheeks, so if you can't find any, start with home-cured belly bacon .  But I hope that someday your freezer will hold chunks of guanciale just like mine.