Return of the Homemade Yogurt 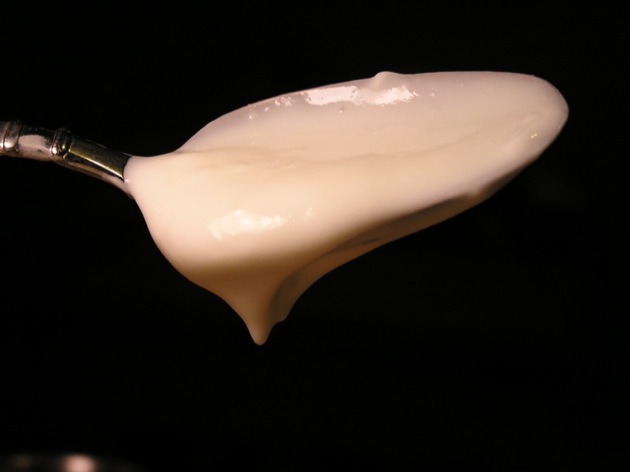 This one has a happy ending.  Unlike my previous attempt where I failed once and then crashed and burned in such an epic fashion that I never wanted make yogurt again, this one has a neat little recipe at the end.  I'm happy.  When I started this crazy business I had expected to knock off a bunch of yogurt and be done with it.  To be honest, I’d never really thought much about yogurt before.  Sure, I like it with granola as much as the next guy, but I wasn’t being completely sincere about the project.  I just wanted to see if it could be done.  Well, there is nothing like failure to spur my interest on a subject, and I’ve been reading into extensively since my last batch came out looking like cooked cottage cheese , albeit the yellowed and moldy kind.

To be fair, I probably never would have picked myself back up again had I not received so many wonderful comments.  The kind words were positive, but they were also extremely informative.  By the end I had come up with a handy little guide and I set out to try and better myself and my yogurt production. 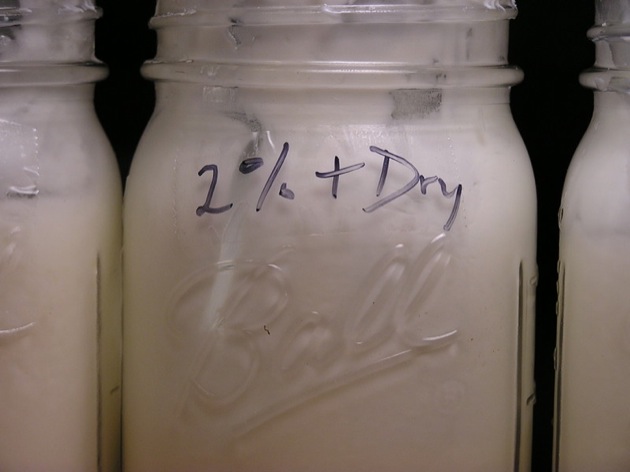 I came up with a few reasons why my yogurt attempts had failed. First , is that my first recipe didn't age for long enough.  My first attempt, which produced a thin, flavorless results, only aged for about 6 hours.  I wanted it to have at least 2 more hours if not much more.

Second , I’d have to find a better way to age it.  My first attempt had me just wrapping a couple of towels around the bottles and setting them on the counter.  My second attempt, god forbid, saw me trying to maintain a temperature in crock-pot filled with water.  It was too difficult.  If I’m going to start making my own yogurt I’d have to find a way to do it painlessly.

Most people recommended either buying a yogurt maker, which is much cheaper than I had any reason to believe, or using a cooler lined with towels or a heating pad.  I had a cooler, and while I couldn't find a heating pad on hand, I did have lots of towels. 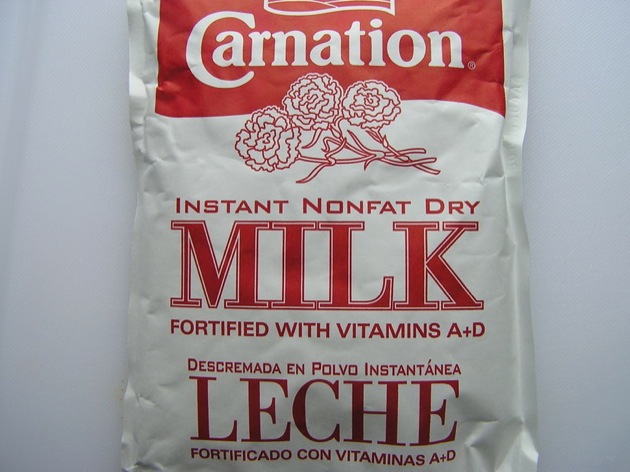 Third , I'd probably have to add a thickener.  Most people recommended a nonfat dry milk powder.  I looked into it, and even food scientist Hervé This , the author of Molecular Gastronomy , was okay with adding a thickener.  I would not fear it. 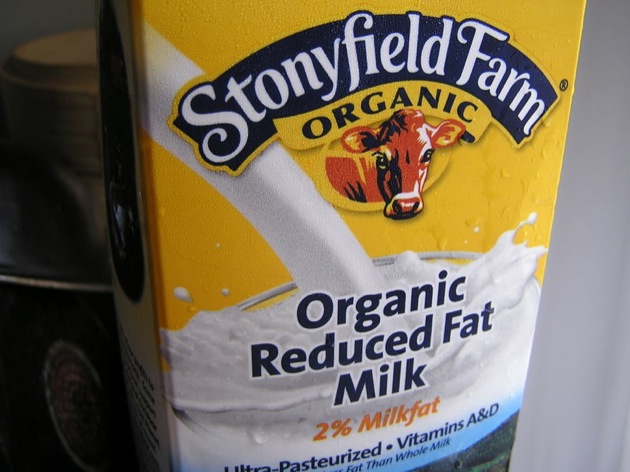 The only question I had was what kind of milk I should use.  Would whole milk taste better than 2%?  Or would it make a yogurt that was too heavy?  Not wanting to leave anything to chance, I decided to try four different versions.  Each one had 1 3/4 cups milk and 1 heaping tablespoon of Stonyfield Farm Plain Whole Yogurt .  The two dry mixes got 3 tablespoons of Nestle Carnation Instant Nonfat Dry Milk . 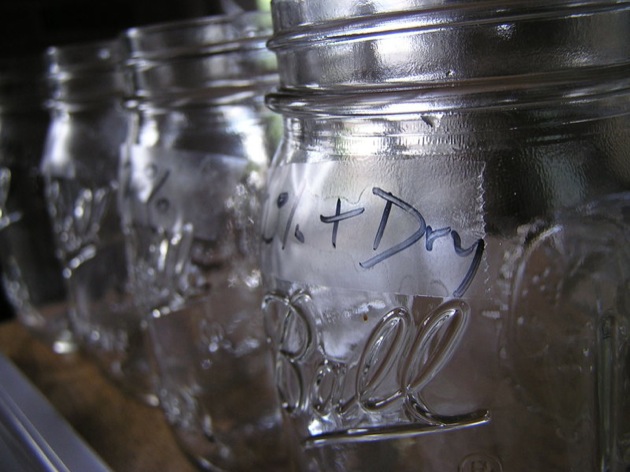 Like my previous attempt, I sterilized the jars in a 225 degree oven for 20 minutes, and washed the lids.  Then I heated the two different kinds of milk up to 185 degrees, let them cool to about 118 degrees, and then poured them in their respective jars.  I stirred in the yogurt and screwed on the lids. 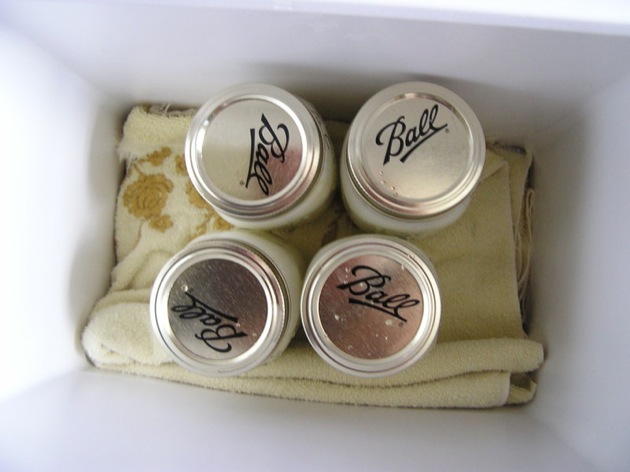 I then stashed them in a cooler lined with towels. 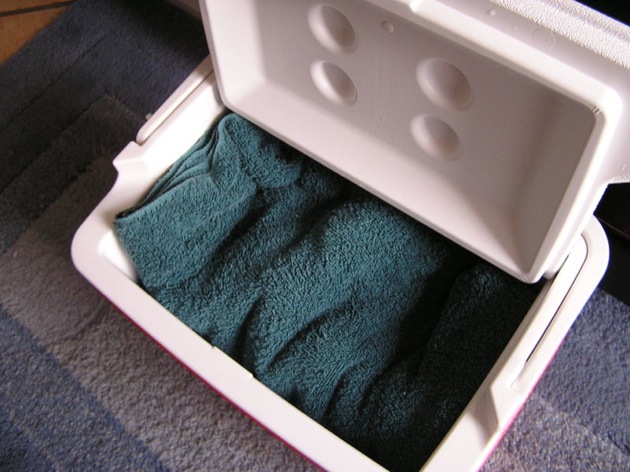 I wrapped as many towels as I could around the jars, closed the lid, and let it hang out for 10 hours.

I removed the jars pensively, hoping I hadn’t just wasted another quart of milk.  The first I did was check the temperature.  If they were cool then the cooler method would be a failure.  But they registered in the upper eighties.  I could proceed. 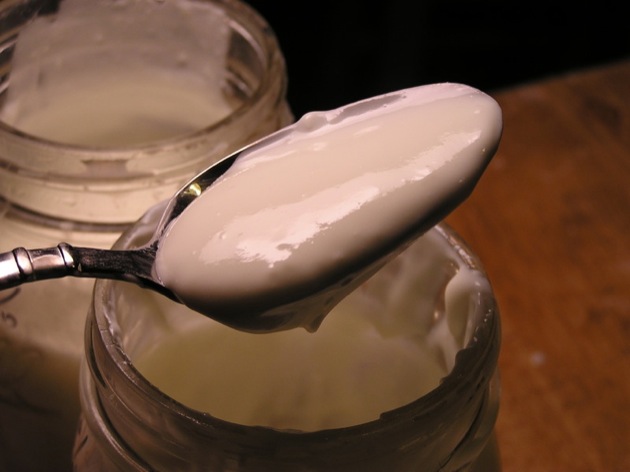 After I dipped a spoon in I could tell by the dip that these were better, but I was completely astounded by just how much better these were.  All four of them had better texture and better taste than my previous attempt.  They stood up straight on the spoon and didn't drip down like heavy cream.

The differences in taste were subtle.  The two jars with the dry milk had a more rounded and, honestly, milky taste.  The two jars without were a little tangier and lighter.  If I had to choose I’d probably nominate the 2% milk with the dry milk as my favorite.  It had a nice balance of acidity and milky body.  It also felt the healthiest.  But, as I learned through all the comments, every has a different way to make yogurt.  And the yogurt I like might not be the one everyone else does.

Now I just need to find some recipes to use this quart of yogurt and I'll be doing fine.