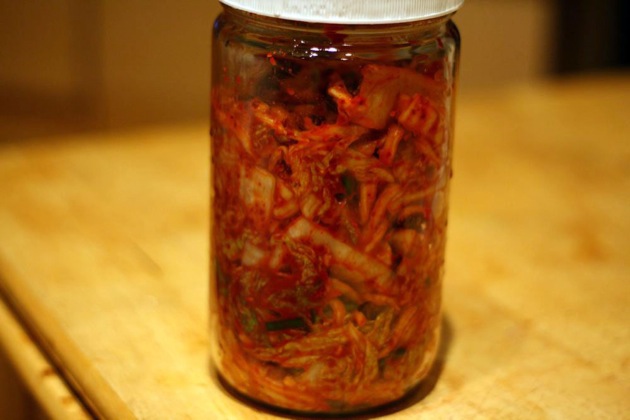 Though Blake was thrilled to jump right into this Kimchi-making process , I dragged my feet the whole way. It's not that I don't love kimchi. That's far from the case . It's just that I've been really happy with the jars of kimchi I've been buying from the Korean market. Uncovering the ways of kimchi, however enlightening the process may be, would sort of remove the magic from the whole experience and turn what had been a pure pleasure into an academic exercise. Kimchi is the one thing I never have to think about. It's always devilishly addicting, and can awaken a dish with ease. I sometimes just eat it straight out the jar.

What kept me going was that, potentially, I could make a batch that was superior to what I had been buying. Of course, I feared the inverse could also be true. And no sooner had I started hunting for a recipe then I ran across this quote from Eat, Drink, Man...:

People who say they got it down after the first couple of attempts are either a) lying, b) geniuses, c) don't really know what good kimchi tastes like or d) have low standards and expectations.

Great. Onward I went. I used a few sources, including Eat, Drink, Man , David Lebovitz , but mostly this incredibly detailed recipe I found from Hi Soo Shin Hepinstall's book Growing up in a Korean Kitchen . I wanted full-flavored kimchi, one that had the proper fermentation, and also that right amount of heat. 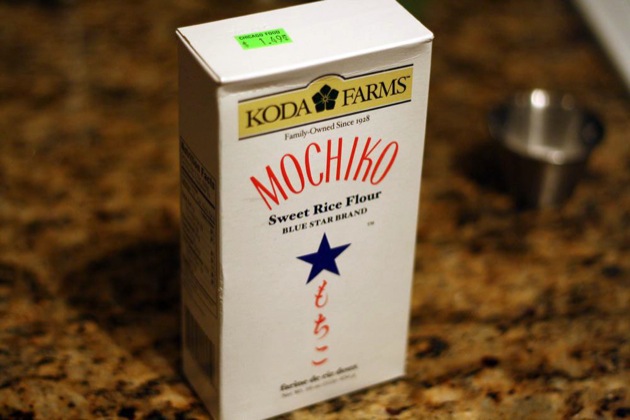 Unlike Blake, I embraced the use of sweet rice flour. I figured it was the best way of creating the proper paste to coat the cabbage leaves. It's an incredibly fun process. The rice flour thickens quickly, and is then mixed with salted shrimp and hot pepper powder. This could be my secret weapon.

But I'm pretty sure I made one crucial mistake. I don't own a jar large enough to store the quartered pieces of cabbage, so I followed the instructions laid down by David Lebowitz for leaf cabbage kimchi. But Hi Soo Shin Hepinstall wasn't happy:

It was my only real point in the process where I gave in and took the easy route. I wonder whether it's going to come back to bite me. 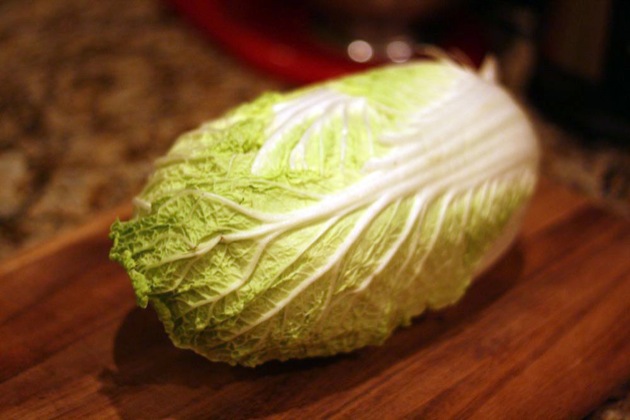 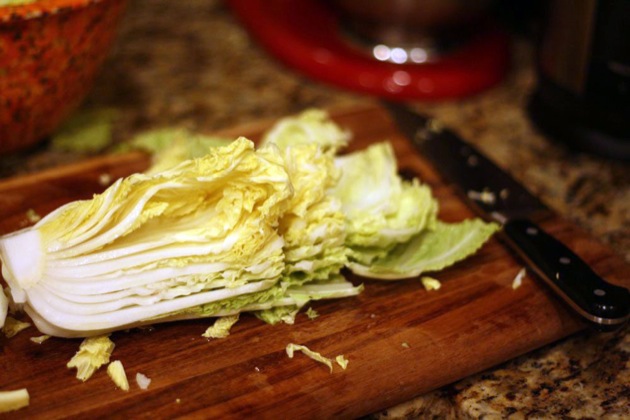 Remove the tough outer leaves of the cabbage. Chop the cabbage into 1-inch by 1-1/2 inch pieces. Rinse the cabbage well in a colander. Toss them into a very large bowl. 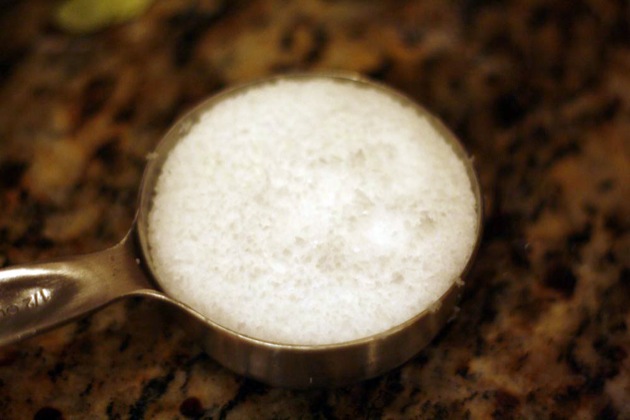 Dump in the salt along with 1/2 cup of lukewarm water. Stir well. 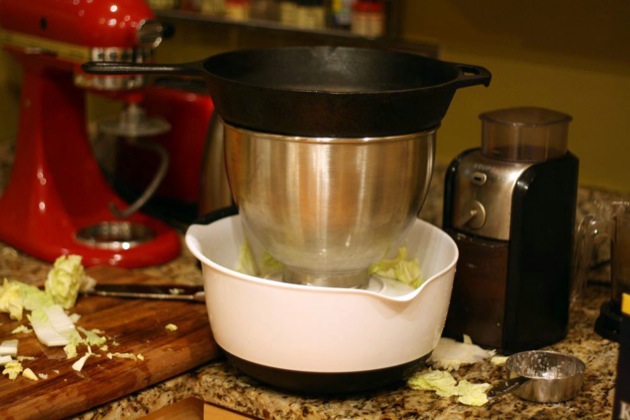 Place a plate with some weights on top. In this case, I placed a bowl on top of the plate, with an iron skillet on top. Weigh it down for about 4 hours.Rinse the cabbage several times to rinse off the salt. Drain on paper towels. 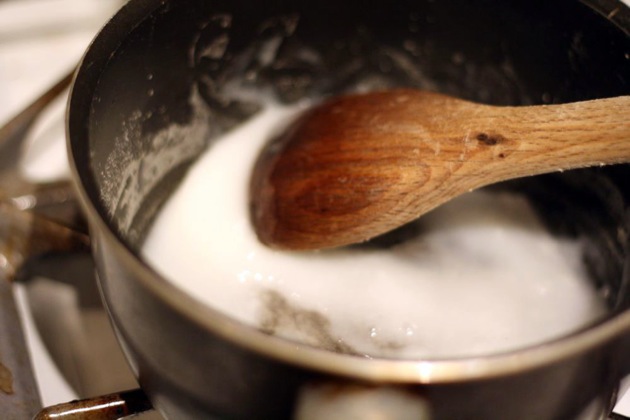 While the cabbage is salting, make the stuffing. Pour 1/2 cup of water into small sauce pan. Add the sweet rice flour. Stir well until dissolved, then turn heat to medium-high and bring to a boil. Reduce heat to medium-low, and stir often for 2 minutes. It should turn into a paste. Turn off the heat and let the paste cool slightly. 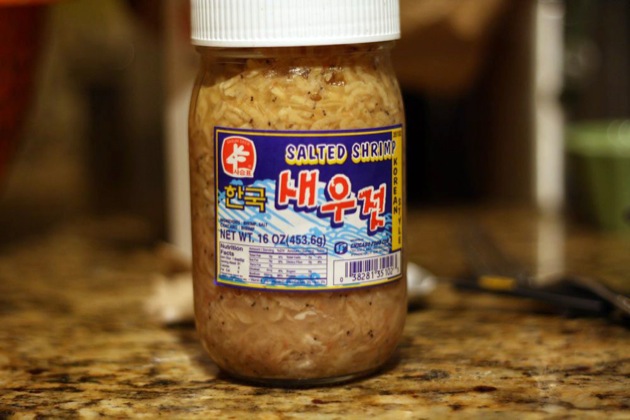 Add the paste to a bowl. Toss in the salted shrimp and hot red pepper. 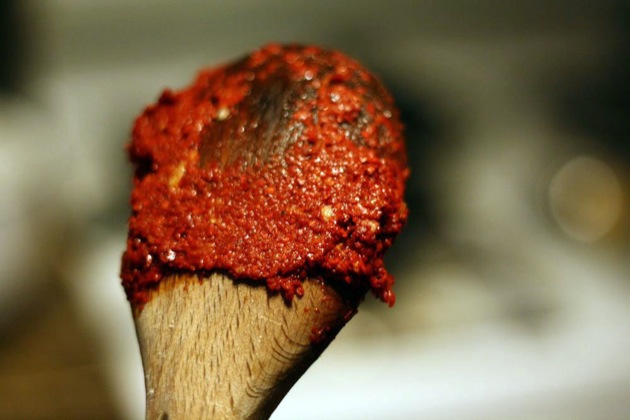 Mix until it turns into a bright red paste. 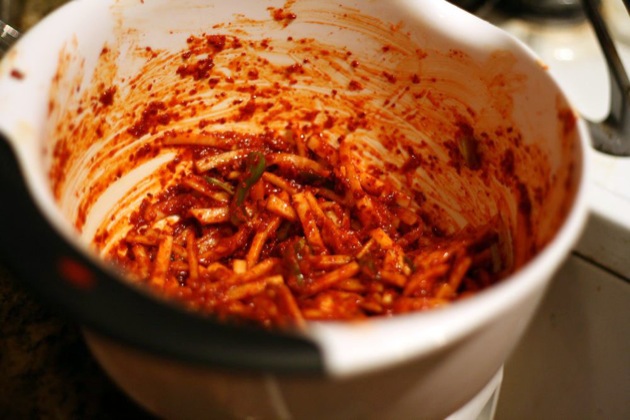 Then add all the rest of the stuffing ingredients to the bowl. Toss with your hands. It will be very, very messy. 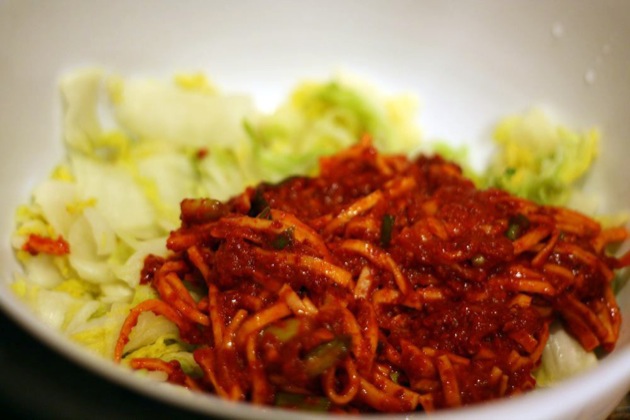 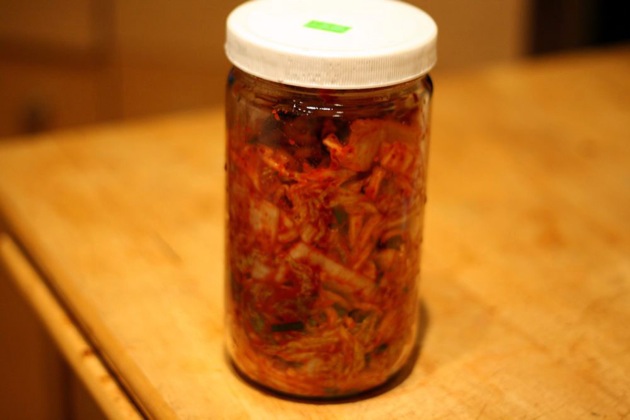 Stuff the mixture into cans, making sure to leave at least 2 inches of space at the top of the jars. Double wrap in plastic. And then set aside in a cool room for about 2 days.