And the best kimchi award goes to... 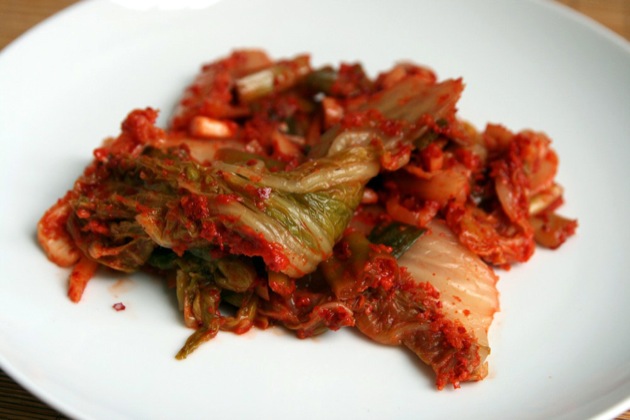 After a tasting of both kimchi projects, the results are in. We have a winner!

First, the recipes. Though our recipes were similar, there were some crucial differences:

Blake used a lot more salted shrimp, kept his cabbage whole, and used an Asian pear for sweetness instead of sugar. He also salted the cabbage rather than brined it.

Nick used just a tiny amount of the shrimp, sugar, rice flour, and he chopped his cabbage into pieces. He also brined his cabbage rather than just salting it.

Nick's "sauce" was sweeter--perhaps too sweet--but had this wonderful texture to it that clung to the cabbage that was probably due to the rice flour paste that he used. It combined better with the vegetables, rather than feeling like a separate element. It was well-melded.

Blake's kimchi's "sauce" was a little too spicy, and it had a somewhat grainy texture to it that we didn't like , probably from the pepper flakes. It didn't adhere to the vegetables thoroughly, feeling like a separate element rather then a melded whole. 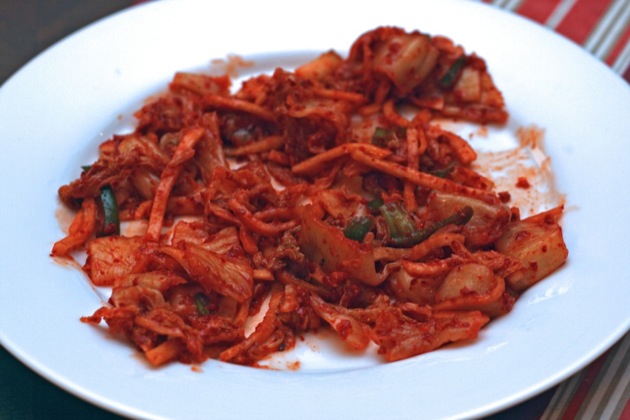 But on the texture of the cabbage itself, Blake was the clear winner. Nick's cabbage tasted too soft and pressed, with no crunch . It didn't seem to have fermented properly. But Blake's kimchi tasted like real kimchi , with that tender-yet-firm texture to the cabbage, a deep fermented taste, and just a hint of tang.

That ultimately helped decide our winner. 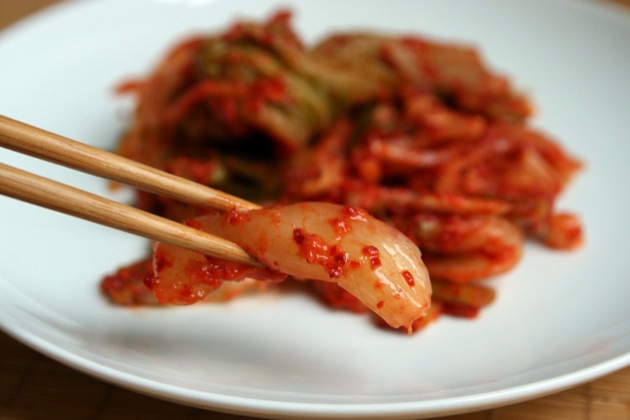 It was hard to decide. But from a platform of successful kimchi-making, Blake's batch seemed the winner. It was properly fermented , and had that deep sour taste. We both had problems with our sauce--Blake's too spicy, Nick's too sweet--which made us even. But though Nick was more successful with the texture of his sauce, Blake was more successful with the texture of the vegetables themselves, which we deemed utterly more important.

So What Did We Learn?

A lot, actually. The clear reason Nick's sauce was more melded with the cabbage is due to his use of rice flour, which gave a perfect "mouthfeel" to his dish. In the future, we'll probably stick to the rice flour process outlined in Nick's post .

We also learned about how to treat the cabbage. Blake's kimchi was made very carefully, treating the cabbage nicely and doing as little as possible to macerate and chop it up. Blake tore the halves apart carefully, salted them carefully, and left the quartered cabbage with its stem on, wrapped in the outer leaves.

Nick, on the other hand, cut his cabbage up into pieces and placed a plate on top, attempting to press out as much moisture as possible. But he probably went overboard, and ended up affecting the crunchy texture of his finished product, an integral part of good kimchi. So lesson number two: treat the cabbage nicely.

The final question is why Nick's kimchi didn't really ferment properly, while Blake's did. Fermentation is most successful in an environment without oxygen, as it's an anaerobic process. This means that you either need a very good seal on the fermenting vessel, or the kimchi needs to be submerged in liquid (either the drain-off from salted cabbage or fresh water, depending on how salty it already is). If the cabbage is in a jar with a bad seal and above the level of liquid, it's not going to ferment.

What actually makes the kimchi ferment is the Lactobacillus microbe which is present already on the cabbage. It thrives where there's no oxygen and when there's sugar to feed on, and it can survive with levels of saltiness where other bad microbes can't. All that said, we don't really know why Nick's didn't ferment as well. Perhaps his rougher treatment of the cabbage did it. Perhaps Blake's copious salted shrimp helped push things along.

In the end, the most important lesson we learned was that kimchi is like lots of things: easy to make a passable version of, but difficult to master. In the future, we'll pull elements from both recipes and hopefully come up with a master version. We have to humbly admit that neither kimchi is the best we've ever tasted, which was the whole point of this project. Honestly, the best bites were when we mixed pieces of both of our batches together. Their qualities seemed to finally balance each other. Still, neither is as good as the kind we can buy from the store.

The bottom line is that you can read about kimchi all day long, but u ntil you get in the kitchen and start making it, you won't really know what it's like . Like any fermented food -- like, say, bread making -- you have to learn by touch, taste, and smell.

In short, this is not the last batch of kimchi that will emerge from our kitchens. 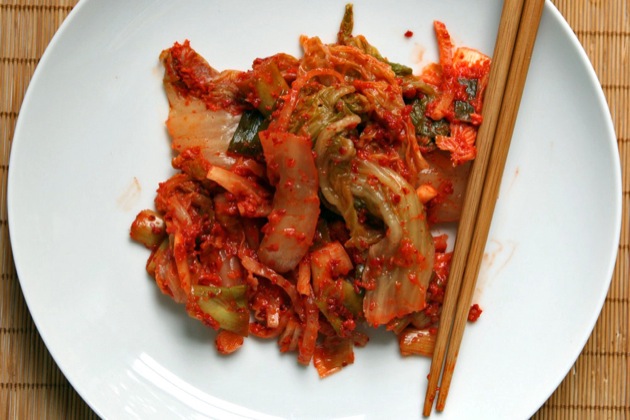