The Case for Hard Cider

Why every American should drink more cider. 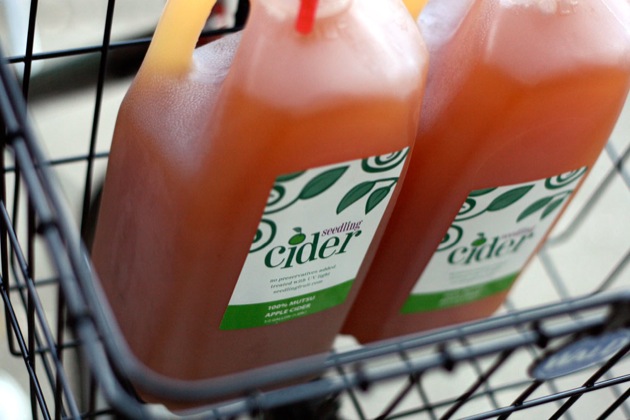 Currently Blake and I have four gallons of apple cider fermenting in the back of his bedroom closet. The hope is that in a few days, thanks to some hungry yeast, we'll have something that might resemble hard apple cider. We're honestly nervous. We've undertaken ridiculous experiments before, but nothing that could potentially get us hammered. If it works, then we'll have made an alcoholic drink for less than it costs to buy a jug of Carlo Rossi. If it doesn't work then, well, we've got a lot of stank apple juice on our hands.

I suppose the first question to ask is "why cider?" It's one that has consumed Blake and I for a few weeks now. It started this fall when Blake was in Michigan, and ended up buying a bushel of apples for ten dollars. A bushel. Which, if you're not familiar, is more than 100 apples. They weren't excellent eating apples, and you can only make so many apple crisps. So we thought, why not make hard cider?

Of course, the turning of apples into juice is not the easiest process in the world: you need a fruit press or a juicer or some other specialized equipment which didn't exactly fit in our Chicago apartments. But we were still intrigued with making hard cider. So in the end, we ended up giving away lots of apples and opting to just buy apple cider to begin with.

What utterly fascinated us was that cider could be made quickly, easily, and cheaply from local ingredients. This same fact has also explained why we've never attempted to make our own wine or beer. About the most exotic ingredient we'll need is yeast, which we purchased from a local home-brewing supply store. Unlike beer, we can buy the main ingredient from the local farmers' market. That's really appealing.

There is also the fascinating history of cider, one that far more extensive than we ever realized. If you're interested in the wild history of cider in America, this article from Slate is a great place to start. In the article, author Brian Palmer uncovers this American drink. Cider was so commonplace in early American history, William Henry Harrison used a cider barrel, along with a log cabin, as his campaign logo in 1840 . He won in a landslide. It was the every-man's drink. Farmers' could easily make it in their cellars and store it for months. It was, for a time, far more popular than beer. Cider became a quintessential American drink.

Cider's popularity was increased by a man named John Chapman--otherwise known as Johnny Appleseed --who collected seeds from local cider mills and spread them across the country. These apples were not particularly good for eating, but made very drinkable cider. So Johnny Appleseed's true mission was to plant orchards not for eating, but for cider-making. Again, we've stumbled on something quintessentially American.

The romanticizing of cider, though, flies in the face of one appalling fact that has kept me away from the drink for years: Most of the cider I've had is awful. It's usually overly sweet, fizzy, and cloying. After a few bottles, my stomach churns and my tastes buds feel assaulted. I beg for the dry sip of lager or ale afterward.

But I also remember some glorious pints in England, served in big sturdy glasses, that were utterly refreshingly, fairly dry, with just a hint of carbonation to enliven each sip. I've also had some luck with some bottles from Northern France that I purchased from my local wine shop Red & White .

For the past few weeks we've both been reading books and articles, searching online forums, and e-mailing people in the know, hoping to discern any secrets we could before we decided to make it. In the process, our heads began to swell with so much information, and so many different opinions, that we almost gave up in desperation. Making cider became serious and studious. How could farmers a hundred years ago deal with all this confusion?

Finally, we realized that It'd be best if we just started. We'd read enough and talked about it long enough. Just like our kimchi challenge , we realized that the best way to learn was to try. If we failed, we'd hopefully learn something along the way.

We're going to have a more technical explanation of our process next week, which hopefully details our successful alcoholic potion and not some acrid swill. If you've ever attempted to make cider at home, we'd love your comments and help. The jugs are currently under a blanket in Blake's apartment.

For those really interested in the history of cider, check out The American Cider Book by Vrest Orton and Cider: Hard and Sweet by Ben Watson.