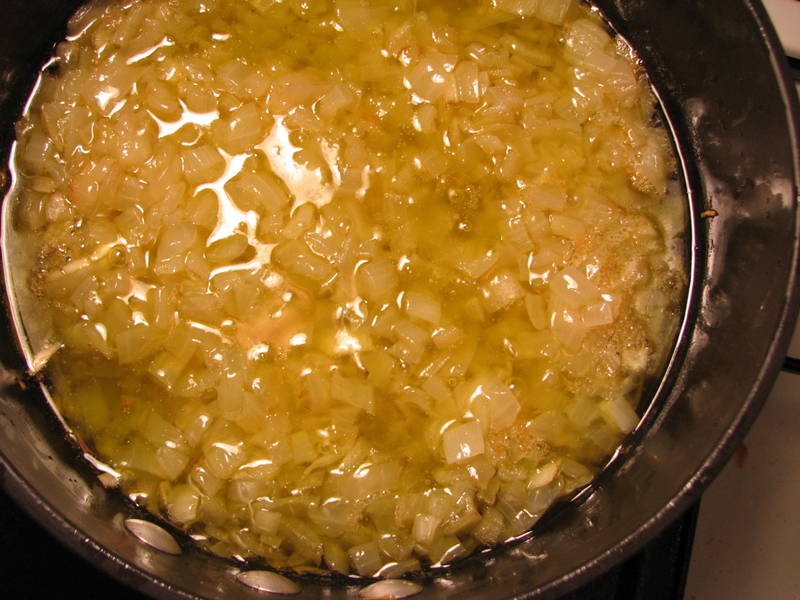 I've been reading Thomas Keller's two cookbooks lately, one for each of his Napa Valley restaurants--Bouchon and The French Laundry--and I've doing a lot of drooling.  First off, they are probably the most gorgeous cookbooks I've ever seen, physically.  From the text design to the layout, paper quality, printing colors, it's all overwhelming. Then, of course, there is the matter of Keller's recipes, which are so intimidating and complicated that I'm apt to put both books on the coffee table and be done with it. The French Laundry , especially, has recipes (each contains twenty to thirty ingredients) which are intimidating enough in their requirements of technique (not to mention things you can't find at your average grocer). Then, you look closer and realize that at least a third of the "ingredients" are actually entire other recipes: see page 352, where you'll be dismayed to find out that you're required to order ingredients over the Internet, and find the time for an 8-hour-long simmer. Needless to say, I've spent more time, for now, reading the other book, Bouchon --while no less beautiful, it is far more accessible.  There is still the problem of hiding entire other recipes in the ingredients list, but those other recipes are within the realm of possibility.  Also, Keller very much enjoys waxing poetic about Bistro food and the simplicity of French classics, and I've been buying into just about all of it.  He says, for example, that taking the time to make garlic confit and ingredients like soffritto are worth it, because they keep for awhile, they're versatile, and having them in the pantry makes sense if you're willing to invest the time and energy (and think ahead a little bit).  So I figured if I spent 5 hours making his recipe for soffritto (which I did, home sick from work yesterday), I'd use it not only in the recipe I'd planned, but it would be around later when I could spread it on a baguette, toss some in a soup, use it as a base for pasta. So this is a how-to for what Keller considers a bistro staple, an ingredient shared by French, Italian, Spanish, Caribbean, and Latin American cuisines (in slightly different form each time).  It's basically caramelizing a bunch of onions as slowly as possible, under the lowest heat possible, keeping everything delicate as the flavor profile gets deeper and richer and more interesting every moment that passes.  Basically you just have to make sure it doesn't burn by keeping the heat painfully low.  This recipe adds tomato puree halfway through, while other recipes add carrots or roasted peppers or herbs. Later this week we have two recipes to write about that used soffritto, and I'm sure there will be more in the future, because it was one of the most remarkable things I've ever used--whatever it's added to is suddenly in possession of deep, long-cooked flavor, the kind of thing you just can't get when throwing ingredients together quickly.  In a way, it's a kind of cheating.  But since I spent over 5 hours making this thing, I'm not about to feel bad about that. Soffritto 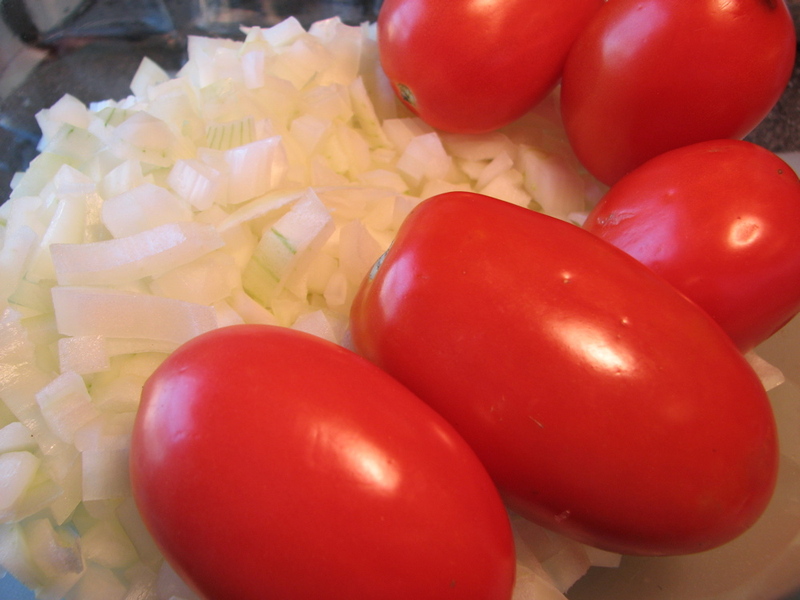 Adapted from Thomas Keller's Bouchon . Put the chopped onions in a saucepan (8 or 9 inches) and cover with the olive oil and a pinch of salt.  It's okay if all the onions aren't covered, but stir it gently to coat them all.  Warm over medium heat until the oil begins to simmer and bubble a little, then, lower the heat and use a diffuser.  Okay, note on diffusers--I had no idea what that was.  It's basically a piece of cast-iron that you put between the burner and your pot, and its job is to conduct the heat very, very evenly, which is important in a dish like this because a hot spot will cause some of the onions to burn.  I used one side of my cast iron griddle. 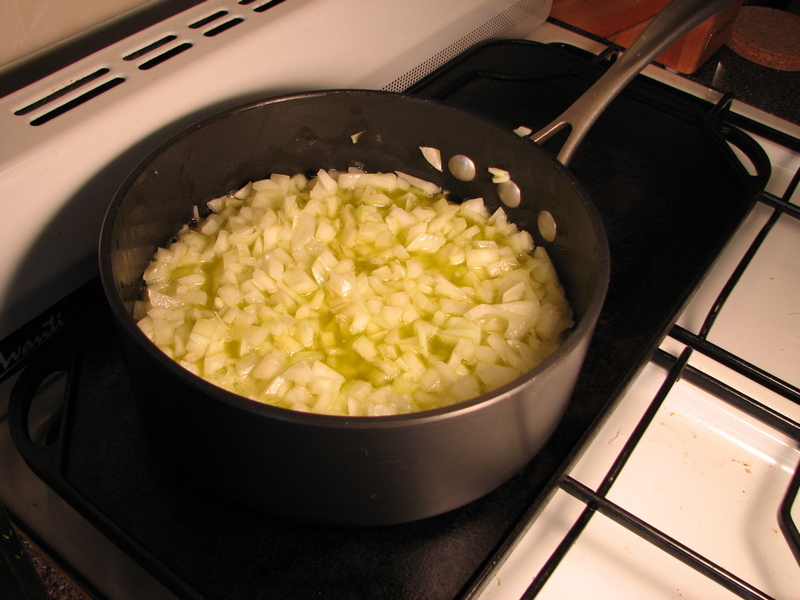 You could try to use a very, very heavy-bottomed pan and it might work just as well, like a dutch oven.  Spend some quality time with the pan adjusting the heat so that oil only bubbles very gently--any higher and it's too likely to burn.  The slower the better with this dish.  I took a photograph of my burner so you could see what i did. 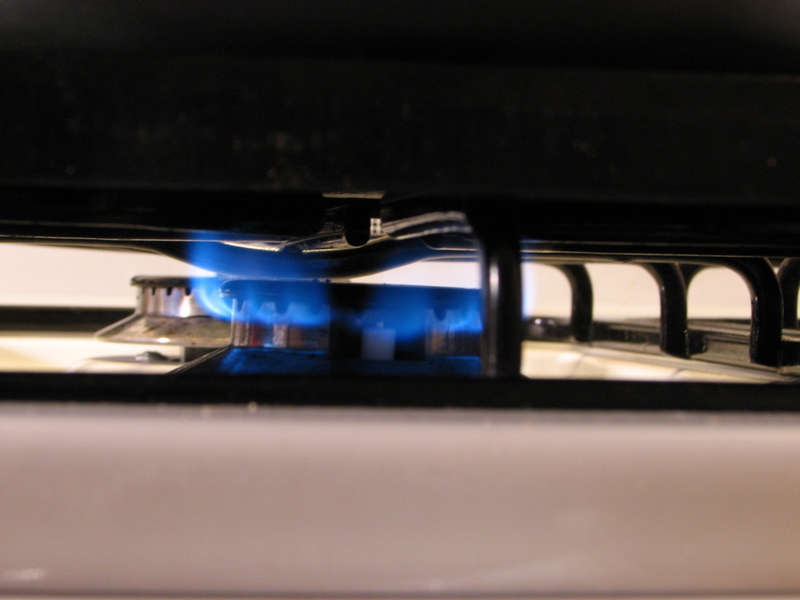 Once you have the heat sorted, you can go exercise or watch a movie or take a shower.  Every once in awhile come back and gently stir it, pulling any onions that have stuck to the side of the pan--and begun to caramelize--back into the mixture.  You'll let it cook for about two and a half hours, or until it's a rich, dark, golden color. Next, take your plum tomatoes, cut them in half along the equator.  Gently squeeze them to remove the seeds and goopy insides, then take a box grater, the large-holed side, and scrape each half, flesh-side towards the grater, so that all the tomato pulp gets grated and you're left with the skins. 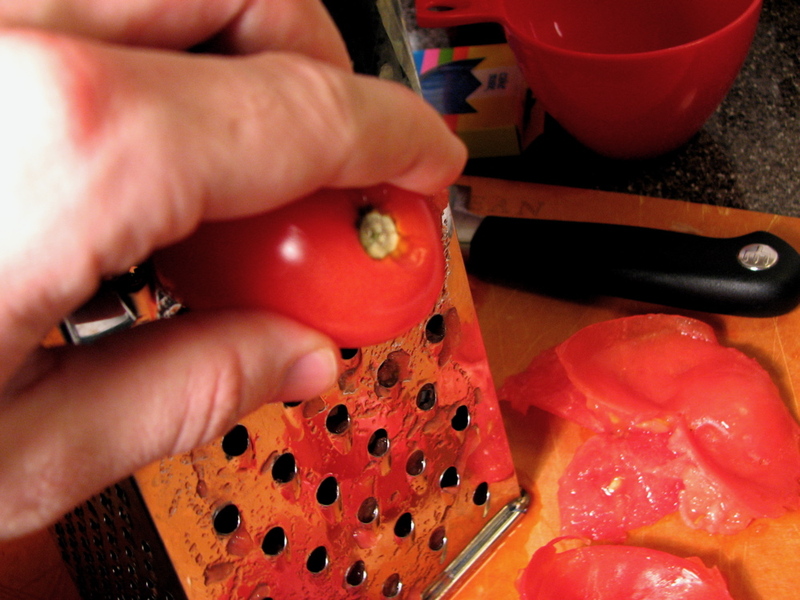 In the end you should have about a cup of tomato puree.  Add it to the onions, stir to combine, and go take another shower, because you've got over 2 hours to kill.  Stir occasionally. 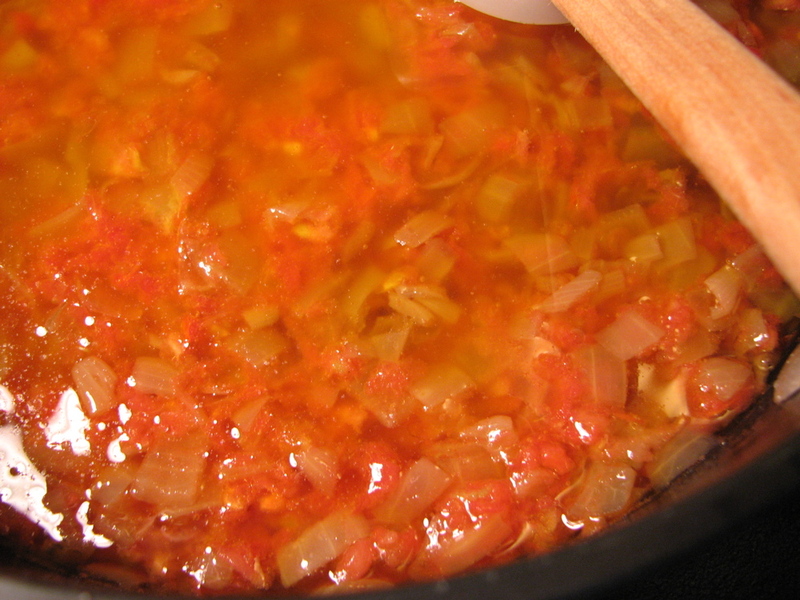 What you're waiting for is the onions and the tomato puree to fry in the oil, after the oil has become clear again (when all the moisture that the tomatoes introduced is evaporated).  It's somewhere between 2 and 2 1/2 hours.  When that happens, add another pinch of salt, the minced garlic, and turn off the heat.  Let it cool in the pan. It will store, submerged in the oil, for a week in the fridge.  Drain it from the oil when using in a recipe--but save that oil, because you can use it to start another soffritto.  The next one will be even richer and more full-bodied.