Since moving to Boerum Hill , groceries have been tough.  We used to live steps away from a B61 bus stop, which takes you directly to Fairway , where almost any food or ingredient can be bought, and at reasonable prices (though their produce isn't always the best).  But now going to Fairway truly is a hassle, and I don't think we've since been.  Shopping in Manhattan is fine in small doses, but the prices truly make it prohibitive.  And now, the bus stop that is steps from our new apartment goes directly down Flatbush then 7th avenue, to the Park Slope Food Coop, like a personalized shuttle service beckoning.

Ever since I moved to New York I was hearing wonderful and terrible things about this place.  It's the largest member-owned coop in the country, and is also the oldest food organization of its kind (plus, they lay claim to the domain foodcoop.com ).  And that long history--through New York's crime periods, through Brooklyn's many changes and waves of gentrification—has also made it one of the stiffest places around.  Unlike most organizations of its kind, which allow the public to shop there and offers members a discount, the Park Slope food coop is closed to the public completely, and is corsetted in rules of all kinds--for example, every member must work 2.75 hours every 4 weeks (which is different than every month, leading to much confusion), and everyone must have their groceries suspiciously checked before leaving to insure against thievery.

When we stopped by once to ask if we could have a tour, anticipating our move to the new neighborhood, we were given a rather cold stare and told that for security’s sake, we would have to come back another time to an official orientation.  Baffled, we craned our necks past the desk attendant, trying to get a look, but they hide the produce aisle in the back corner of the store, away from curious eyes.  In fact, the only way to get a glimpse of the reportedly excellent produce is to spend two hours in an orientation session, at which point you get a brief tour and then are offered the chance to join on the spot, or shop for a day with a pass.  One assumes they hope you will impulsively join in a swoony state after you've seen the arm-length bunches of basil for $1.29.  Which is what we did, paying the $25 fee, signing up to work at 5:30 AM on a Friday morning (very few reasonably-timed shifts are available, considering over 12,000 people are vying for them)  and getting a slip of paper that allowed us to shop that very minute .

When we first got home, we had joiners-remorse.  But that has dissipated slowly as we've shopped there and worked.  There’s a certain tone to this place, something between self-seriousness, smugness, and elitism,  that doesn’t sit right with me. It's a shame, because it doesn’t need to be there.  But all that aside, it’s been a mostly good experience, and I’m not interested in writing a formulaic coop-is-like- Soviet-Russia article .  Nor, to be honest, am I much interested in the so-called political act that joining the coop is intended to be.  What I care about it getting the best food possible, which isn’t so easy in New York—the closest grocery store, Pathmark, has pretty awful produce.

From the coop, I’ve walked out with 41 cent bunches of arugula, giant bags of mesclun salad for a couple dollars, loafs of freshly-delivered bread for half of what I’m used to paying.  As a rule, everything is marked up 21%, no matter what—half or even a quarter of what your average grocery store charges.  The seafood selection is pretty abysmal—nothing I’ve seen beyond a few frozen Trader-Joe's-style fillets—and I miss the cheese selection at Fairway (though what the coop has is quite cheap--maybe I just miss the Fairway guy who lets me taste everything).  They do stock a decent selection of meats, including grass-fed beef, though there’s no butcher to talk to—it’s all shrink-wrapped.  But the bottom line is I walk out of there (after the tedious checkout process and long lines) wondering how I got away with so much food for so little.  And so far, working there has been fine and I’ve met people who are funny and generous.  The human element, the part where the work requirement forces you to personally invest in maintaining the coop, is where it begins to makes sense.  Beneath the bureaucracy, there are some great people. 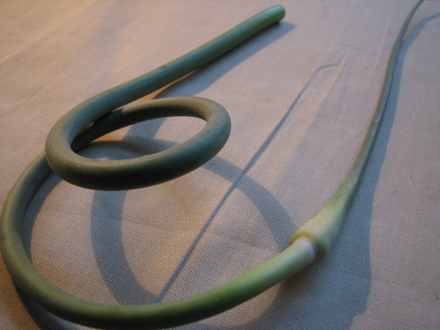 Plus, they have lots of unusual produce.  The other day, they had something called Garlic Scapes—little stem-like shoots that grow out of the garlic bulb and curl like pigs' tails.  For 9 cents apiece.  So we bought some, took them home, and hit the Google.  (The coop also keeps a blog to inform customers what’s new, which I like).

Turns out the best way to use them is by making pesto.  The scapes are garlicky, certainly, but they don’t have near the spicy bite of garlic cloves, making them a little more heady.  You can treat them like green beans and roast or blanch them, you can slice more tender ones like scallions and throw them in a salad or into scrambled eggs, or you can blend them with olive oil, pine nuts, and Parmesan and toss with pasta.  Which is what I did.  It was delicious, a kind of garlic essence with that fresh greens taste.  I think next time I’d add parsley or even basil to bulk it out a little, and round out the dish with some cherry tomatoes to soften and sweeten it—the garlic taste was still a bit much, though that could have been the maturity of the scapes I was using.

I also saw scapes at a local farmer’s market so they’re available.  Now is the short season, as the farmer can only sell them when they’re this age—left on the plant, they lose their curl and become woody and inedible. 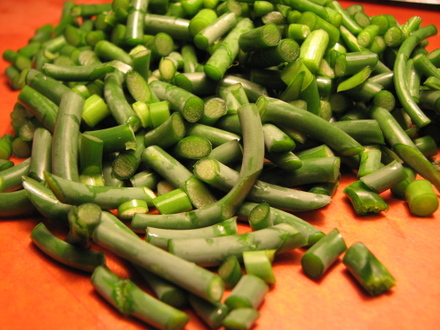 The ratios in this are really subjective, which is why I haven’t given quantities.  The order and technique, however, are important.  Put the scapes and pine nuts into a food processor and chop well until everything is starting to blend and break down.  Add a couple glugs of olive oil and blend again.  Continue to add olive oil in stages until the mixture loosens and blends easily. 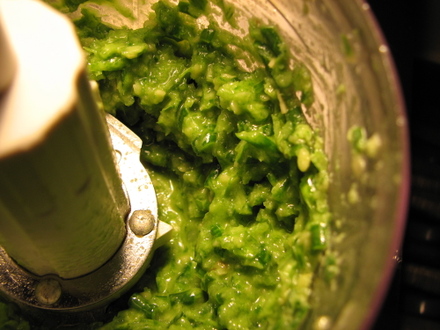 Remove to a bowl and mix in salt and Parmesan cheese.  Continue adding cheese and olive oil alternately until desired taste and consistency is achieved.

Boil some pasta, drain, and return to cooking pan. Add pesto (not too much) and stir into pasta.  Plate, and top with grated Parmesan and more toasted pine nuts, if desired. 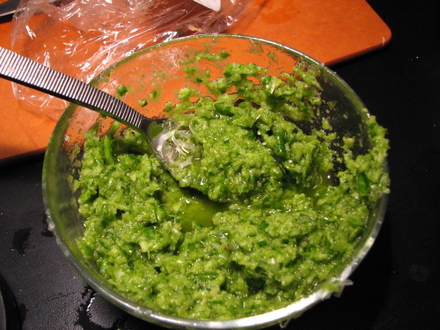