Is Broiling a Steak as Good as Grilling One? 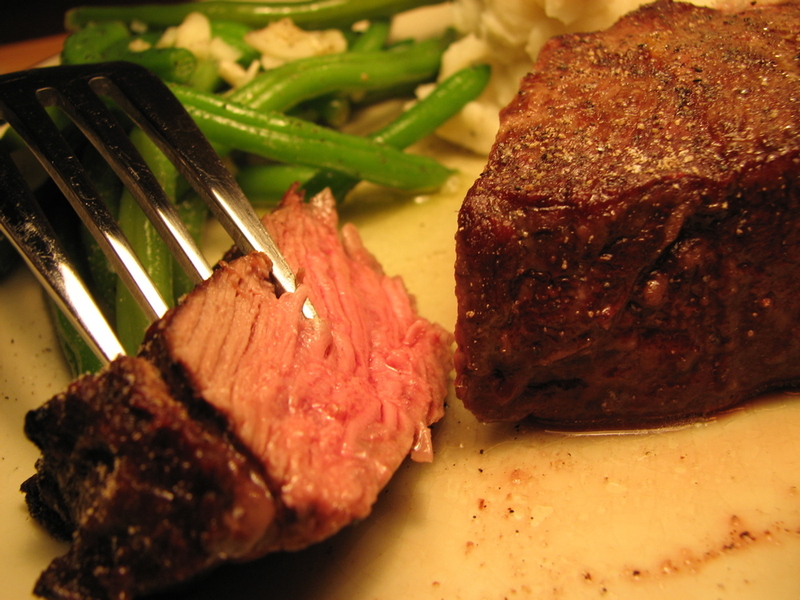 There is "no doubt early man cooked his meats using dry heat," claims Madeleine Kamman, author of the esteemed Making of a Cook and a very friendly-looking lady who I sometimes wish was my grandmother.  She speculates that he might have discovered this gastronomic feat in the instance of two different accidents, producing two enduring ways of cooking meat.  The first, a discovery of whole animals while foraging for food after a forest fire: whole and succulently roasted amid the remnants of ashes--voila! This tastes great!  We put an animal in a very hot environment (hey, nature did this, we're not going to argue), it smells delicious and we don't do any work!

The second accident, however, and the simpler of the two, is the subject of this post: when a piece of meat was dropped accidentally "amidst the flames of a smoldering fire," where it would have charred and seared and later "found to be much more appetizing and satisfying than uncooked flesh." It's the char and sear that I'm interested in, especially in taking on my role as male, descendant of the hunter, to assume responsibility of standing in front of a grill poking at meat.  It's satisfying and apparently genetic, according to Kamman.

She claims that the prevalence of males in restaurant chefery, as well as in front of the family barbecue, is written into our code, social or biological or both. But wonderful as grilling is, and we've explored its options , there's always this problem that I don't live in California where I could grill all winter long.

Just about the end of fall, when it's no longer feasible to flip steaks with my gloved hands and the charcoals are so frozen it's impossible to coax them into a respectable level of heat, I start losing hope, pout, and eventually retire into the indoors to eat chicken soup and pasta for 5 months.

But lately I've been reading a few books about restaurants and their kitchens, and I kept noticing that there are many who cook their steaks under broilers, including the infamous (and overrated?) Peter Luger steakhouse in Brooklyn.  These guys have a serious, longstanding reputation, offering what no one would argue aren't some of the best steaks in the country (along with some of the worst decor and service in the country--they still only take cash or the coveted "Peter Luger credit card"), and they don't have any problem using a gas oven to cook their meat.  Why couldn't I do the same?

If you forget the the grill marks that you get when you cook from the bottom, isn't a heck-of-a-hot gas flame a pretty good substitute, the same thing people with gas grills are working with all over the country?  I've heard that Peter Luger's broiler approaches 1800 degrees, so I guess that's not going to happen in my apartment anytime soon.  Nevertheless, I thought was was worth a try. Madeleine informs me that broiling and grilling are actually the same thing, even interchangeable terms, meaning "cooked by radiant heat."  So I bought sirloin at Fairway for $4 a pound (I don't understand how they have these prices ) and set out to broil myself a steak dinner with garlic mash potatoes and green beans. 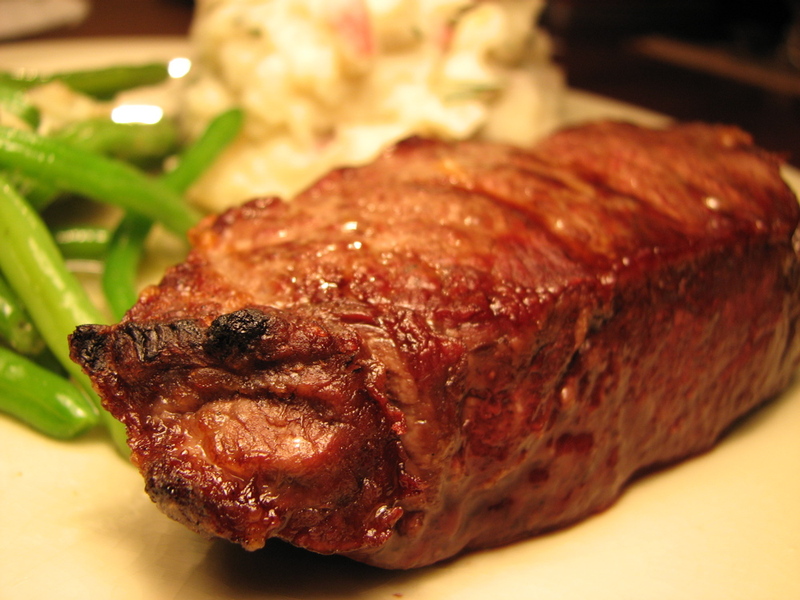 First, trim the meat of fat as best you can, but leave a little for flavor.  Consider how many portions you'd like, and cut it up using that as a guide.

Preheat the broiler in your oven.  Next, brush the meat with an extremely thin layer of olive oil (it helps sear the meat faster).  As you're handling the steak, keep each piece as juicy as possible--be gentle.  Do not salt and pepper--salt will retard the browning of the meat surface; the pepper will burn. I used a little metal roasting rack to hold the steaks.  Madeleine asks that you adjust the broiler so that it's 4 inches from the surface of the meat--I have no idea if my broiler is adjustable, so I sort of hoped for the best. 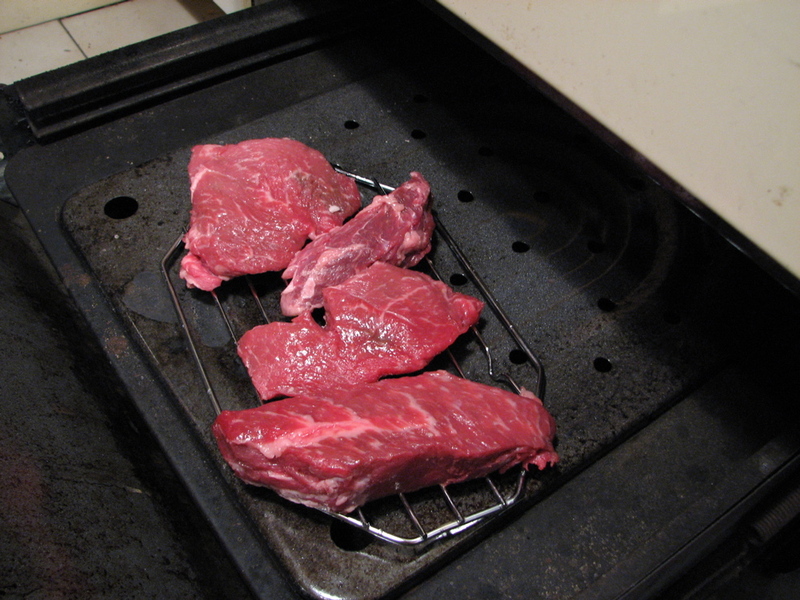 They go in like this.  They cook about 4 minutes. 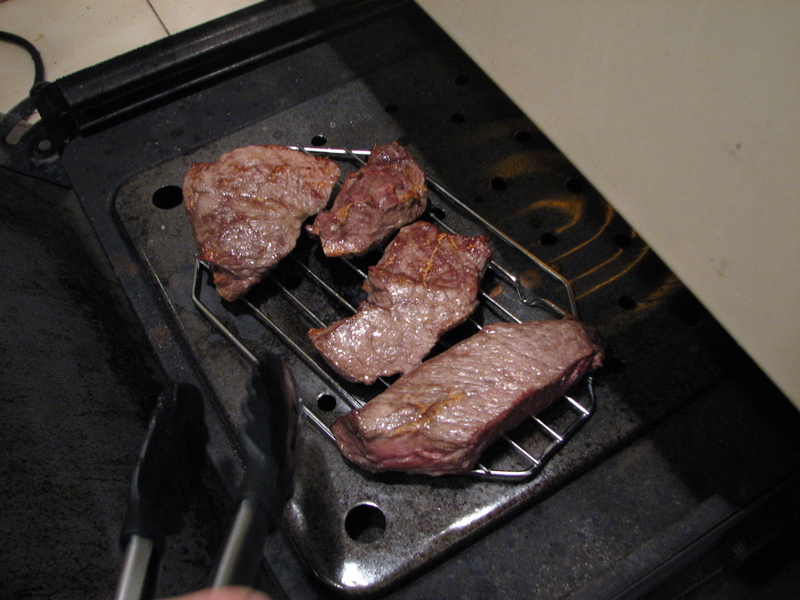 They come out like this.  Quickly salt and pepper that browned side, then flip and sear another 3-4 minutes, depending on the thickness of the meat. You'll probably need somebody else to handle the potatoes, because you'll be busy standing around the broiler sweating and worrying--it's difficult to close the drawer on that thing and just hope for the best.  Unlike grilling, you can't be obsessed and watch the progress.  Boil the potatoes until a fork pierces them easily, then drain and cut into chunks (leave the skin on).  Cut off the top of the garlic head, wrap the entire thing in tin foil and roast it in the oven (it should be hot with the broiler on) until it's fragrant, probably ten minutes or so. 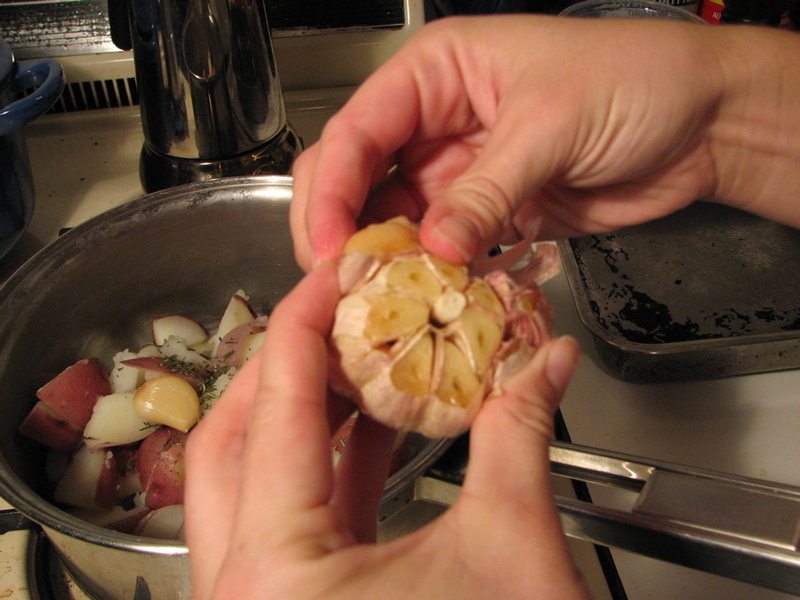 The garlic cloves should be soft and should slip right out of their paper skins.  Squeeze them into the pot with the potatoes, and add chopped rosemary.  Mash with a potato masher or serving fork and add a bit of milk, cream, or for real richness, cream cheese. 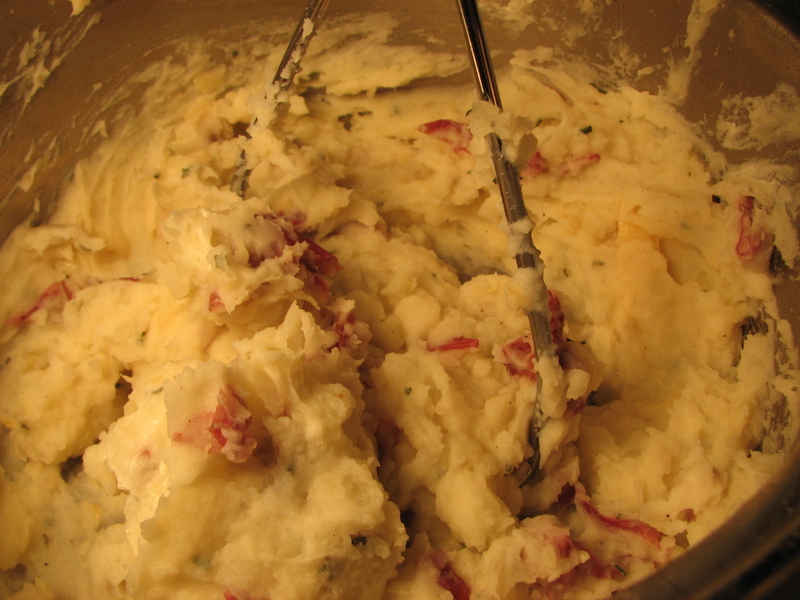 The steaks, once they come out, should rest for a couple minutes so the juices stabilize into the muscle tissue--but don't wait too long, as then the juices will travel back from the center to the outside and break through the sear--that's what Madeleine says. Another tip from Madeleine: when the meat is being seared, the juices travel to the center. So when moisture beads up in the center  on the second side, after you've flipped the steak once, that means rare.  If the juices make a puddle, that's medium rare.  I didn't see any of this going on, but if that happens to you, you'll know. Serves with green beans blanched and tossed with olive oil and garlic (yes, there's more garlic in this recipe than is appropriate for any person to consume).  Now we know how to grill in winter!