The kiwi could change everything 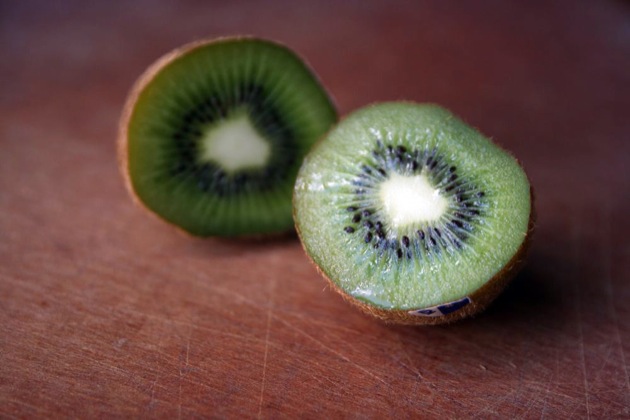 The kiwi that could change everything

I keep returning to Korean barbecue, and once I get it in my head, nothing else interests me. The amazing flavor of the meat--beefy and complex and sweet--and the unique butchering and cooking method, which renders the normally tough short rib into a grillable pleasure. These things are crack to someone who loves to eat and is fascinated with cooking.

So here's what we know about Korean-style short ribs, also known as Kalbi : they're cut differently than normal short ribs (technical term: flanken cut) meaning they can be grilled quickly instead of cooked slowly for hours . That in itself is a revelation. The kalbi method takes an inexpensive cut of meat and turns it into something that you don't have to cook forever to tenderize it . Normally, that's the case with cheap cuts of meat, they take time and love. That's the principle of braising. That's the principle of barbecue. Cheap cuts are cheap because you can't just slap them down on a grill and expect filet mignon; they require someone who knows what they're doing in the kitchen. You save some money, and you make up for it in time. 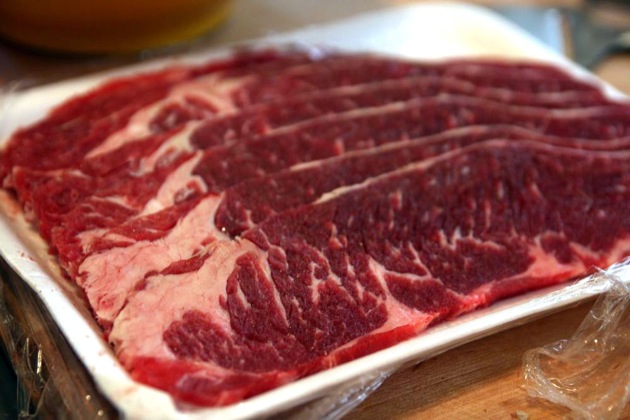 Granted, kalbi still requires time, in the form of a long marinating stage. But it gives you the primal pleasure of cooking the ribs hot and fast. Rather than peeking into an oven every half hour hoping the damned things are finally tender, you get to cook them all at once and eat them immediately.

The marinade we've settled on here at The Paupered Chef is pretty straightforward, though some would call it "nouveau" compared to the most traditional recipes: soy sauce, rice wine, garlic, scallions, brown sugar, and a pureed Asian pear, which tastes kind of like a cross between an apple and a pear (it's the addition of fruit that might rankle some grandmothers). But recently I was sitting in a catering class with the head of a large catering company here in Chicago, and he started talking about this Korean short rib dish that they do, where they have a secret ingredient in the marinade: kiwi. "It's amazing," he said. " There's an enzyme in kiwi that makes the meat incredibly tender ." For a catering company, it solves the riddle of short ribs (their toughness) without the need for the manpower and time of cooking them slowly forever. But of course, my mind immediately jumped to a possible experiment. 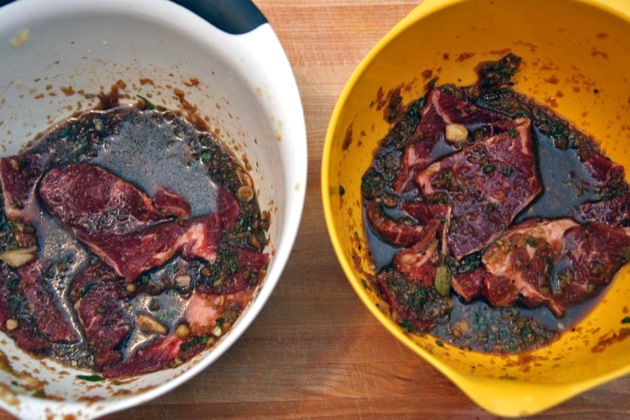 Will the kiwi make a difference?

I decided to put it to the test: with a pile of flanken-cut short ribs, I made our marinade and then added a pureed kiwi to half of it. I scrupulously kept the two batches apart and let them sit for 4 hours to allow the kiwi to do its supposed work. Then I cooked them side-by-side and sat down for a taste test. For the results....read on.

First off, 4 hours is not a very long time compared to some recommendations for barbecue marinating (sometimes the meat is supposed to sit for 24 hours or more). So it may be that the kiwi enzyme doesn't reach its fullest potential until more time has passed. 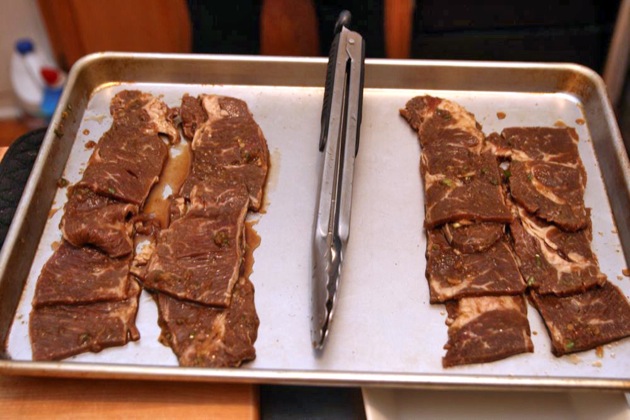 Kiwi-marinated short ribs on the left

That said, I noticed a difference after 4 hours. Even before cooking, picking up the meat from each marinade, the kiwi version was noticeably softer--I'm trying to avoid the word "limp" but that's really what it was--and after cooking it was more tender than an identical piece of meat cooked simultaneously with a kiwi-less marinade.

The kiwi is really interesting.  But I was also recently emailing with a Korean friend about the subject of Korean barbecue, and she was of the opinion that the secret to a good marinade is the proportion of soy sauce to sugar, at least according to her mother. She's going to get back to me. I've also heard of people using Sprint or 7-up in the marinade, or pear juice instead of pureed pear.

Do you have a secret ingredient in your marinade? Does your grandmother insist on it being done a certain way? How about a certain cooking method, like charcoal versus gas? I think we need to gather all possible intelligence about how it's done.

Leave it in the comments. Together we'll come up with the perfect recipe.