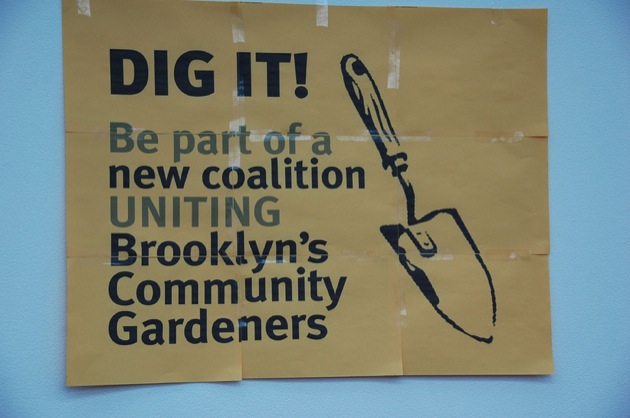 I didn't see this coming.  I didn't imagine that suddenly, aged 25, living in a city, I'd want to be a gardener.  Gardening does not seem cool.  Nobody thinks gardeners are trendy.  It's as old and musty a hobby as any.  Yet there I found myself this past Saturday, spending seven hours of my weekend at the Brooklyn Botanic Garden , where a large crowd of urban gardening enthusiasts gathered to talk about heirloom seeds, the best vegetables for Brooklyn, how to grow herbs indoors, canning and preservation techniques, gardening on brownstone rooftops--even understanding urban soil health and using sustainable watering practices.  Just last week, I wrote enthusiastically about pet worms in my apartment , who eat my food scraps to make compost.  What have I gotten myself into?

I want to be as close to my food as possible.  I want the highest quality ingredients for the lowest price.  Very quickly the only option which seems logical is to start a garden.

As the presenter in my first workshop made clear, Brooklyn was all farmland one hundred years back--and it can be farmland again.  There are new obstacles these days.  Lack of land, buildings, pollution, concrete.  But growing food in Brooklyn is not insurmountable if we think about the problem simply, beginning with an understanding of the city's ecology.  If you planted corn in a field, it would grow, because it used to grow here.  Urban gardening reclaims the land as what it used to be.

I arrived at the Botanic Gardens within 20 minutes of the beginning of registration, winding through the misty overcast Saturday morning, but the main convention room--a bright, expansive, glass-ceilinged space--was already packed to the gills.  In fact, it was hard to move.  At one side were the workshop signup tables, where everyone was vying for spots in one morning and one afternoon workshop--but spots were limited.  My initial hope was to end up in " Savoring Home-Grown Herbs All Year Long ," which taught how to freeze, dry, make salts, oils, an other things with herbs, and " Best Vegetables for Brooklyn ," a primer on heirloom vegetables that are appropriate for this climate.  The herb class was long gone, unfortunately, as were most other morning workshops like "Starting from Seed" and "Raising Chickens and Bees in the City," but I did get my afternoon choice.  For the morning class I nabbed a spot in " The Edible Pallete: Food-Producing Plants for the Decorative Landscape ," which I feared was going to be about edible flowers.  Interesting, but pretty useless for my needs.

Instead, it was a stimulating, somewhat academic treatise on plants in an urban landscape.

Patrick Cullina, who is the vice president of Horticulture and Operations at Brooklyn Botanic Garden, went with a visually-driven approach, (many of the photographs seemed right out of the Urban Nature Flickr group) showing slides of various urban landscapes and theorizing about our relationship to plants and our attempts to control their growth (decoratively).  The degraded industrialized landscape provides obstacles, but the obvious fact that plants still want to grow in it. The potential for this landscape is the same as it was as farmland.

The lecture was most engaging on this visual level--reimagining Brooklyn as an urban pastoral.

The second half of the lecture was more practical: what actually does grow and look pretty?  Fruit trees are the most obvious, specifically in the rose family: apple, peach, pear, cherry, blackberry, raspberry, etc.  The dilemma is that a tree is likely to be bred for one purpose or the other: either for flower potential (aesthetic purpose), or produce lots of fruit (practical).  Other options for an edible landscape is blueberry, cranberry, and juniper berry plants.  Citrus trees are harder in this climate, but grown indoors in the winter, then moved outside in the summer, they can do well.  They flower beautifully.

The whole convention then broke for lunch, while some short films shown in the auditorium--including one on worm composting !--and the chance to wander around the nearby gardens.  I picked up armfuls of flyers, like a guide to which vegetables are in season throughout the year (a great guide for shopping at a greenmarket).  Urban Oasis Garden was even giving away free seedlings of basil and collard greens, which are now in my windowsill.

A panel of three speakers followed, including 19-year old Kimberly Vargas, who works with Added Value , the wonderful organization that grows food on top of a parking lot in Red Hook, Brooklyn .  Mark Winne, who recently published a book called Closing the Food Gap , also gave a stirring, prosaic talk about the injustices in urban environments when it comes to options for fresh food and produce.  Finally, Karen Washington, a longtime activist for community gardens, made the case further for the importance of these institutions.  My favorite moment throughout the day came when the question was posed: how many of your have grown your own food in Brooklyn?  And almost everyone raised their hand.

My final workshop, probably the most directly useful, was "Best Vegetables for Brooklyn."  A woman named Trina Pilonero from Silver Heights Farm Nursery ran through a long presentation of various vegetables groups and the best heirloom varieties of each for Brooklyn's climate.

What, exactly, is an heirloom vegetable? It's a vegetable breed that's thoroughly unmodern.  If it were a tomato, it would be uninterested in looking round, red, and smooth.  It has suffered no selective breeding and is not hybridized.  It is by definition at least 50 years old, as a breed.  It is also open-pollinated, meaning that the seeds it produces can be placed in the ground and grown again, with the same result.

She said that it may be safe to start planting as early as April 20th, after which we can assume there will be no frost.  Vegetables which like cooler weather will begin to thrive, such as kale and snap peas. As the season approaches I'll be snapping some pictures of the humble community garden plot that I've claimed, a 3.5-ft. wide raised bed that should accommodate us throughout the season.

I can't wait to be flush with winter greens, lettuces, carrots, peas, beans, zucchini, chili peppers--and of course tomatoes.  We'll grow things you can't buy at the grocery store--crazy long french red onions, purple carrots, white and red Chioggia beets with concentric circles.  Even if the plants produce just a few actual vegetables, I'm only out some time and the price of seeds.  We're even hoping to grow some corn in a whiskey barrel.  It's going to be a fun summer.