A chorizo-laden recipe deglazed with champagne 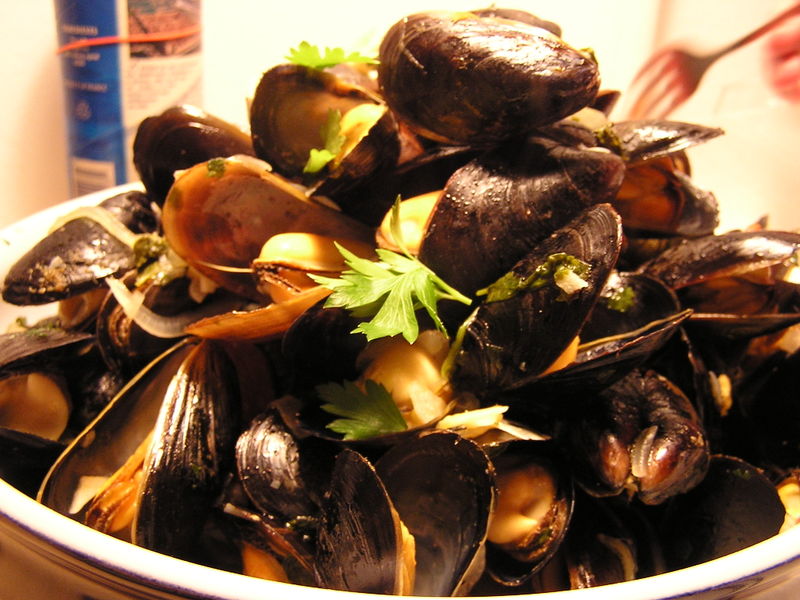 When’s the last time you went to a butcher or fish guy and ordered six pounds of anything?  “Hey, I was wondering if you can give me six pounds of salmon.”  “Sure thing, bub.  That’ll be a hundred and eight dollars.”  “Um, thanks.” With mussels, you can.  They're like $2.50 a pound.  Three of us devoured (and I mean devoured : mussels are a sensual, hands-on affair) two pounds each of these strange sea critters.  Even if you’ll usually find them clamped to the side of a rust-bucket boat or growing on ropes in some bay somewhere.  They are a real pleasure with just a garlic, butter and cream broth, but we stepped out on a limb a little and made them “a la Portugeuse”, inspired by our experience at Casa Mono , which involved that wonderful spicy paprika-loaded chorizo sausage and a bottle of champagne to deglaze.  Once I found a similar recipe in my recently-arrived-via-Amazon Les Halles cookbook , with Anthony Bourdain's smirking grin on the cover cajoling me into trying one of his recipes, the plan was in motion. 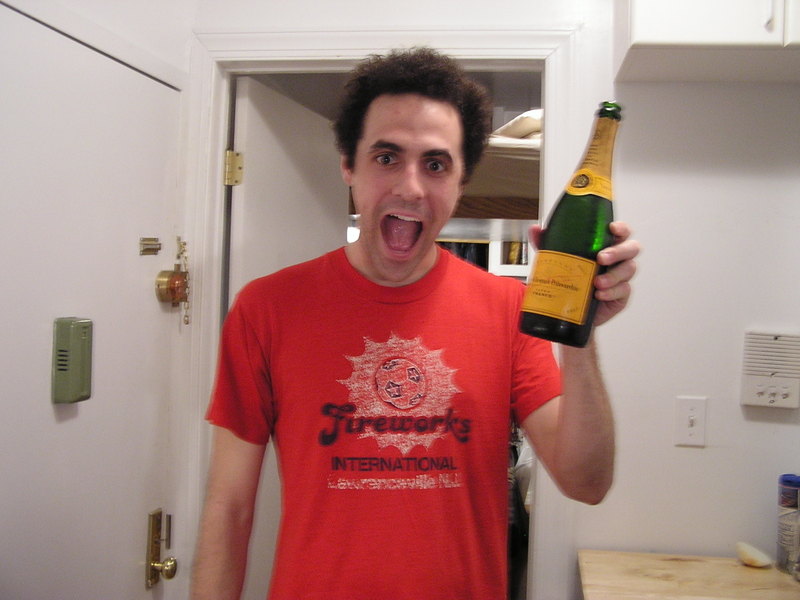 Hi, crazy Max!  Max, our third roomate, is a little bit excited by the champagne.  He started pouring glasses while Nick was chopping garlic, onions and chorizo, and I had to remind him to save enough for the dish.  I put him to work "de-bearding" the mussels, which means that you take the mussel in your hand and see if there is still a little frayed-looking thing coming out of one side.  It’s the part where the mussel attaches to the rope, where spent its life.  You want to yank this out.  Also, if any of the mussels are not closed or are cracked, give them a pinch and put them aside in another bowl.  If they’re still alive, they’ll respond by closing up.  So when you’ve gone through the lot, check back and throw out any that haven’t closed up. 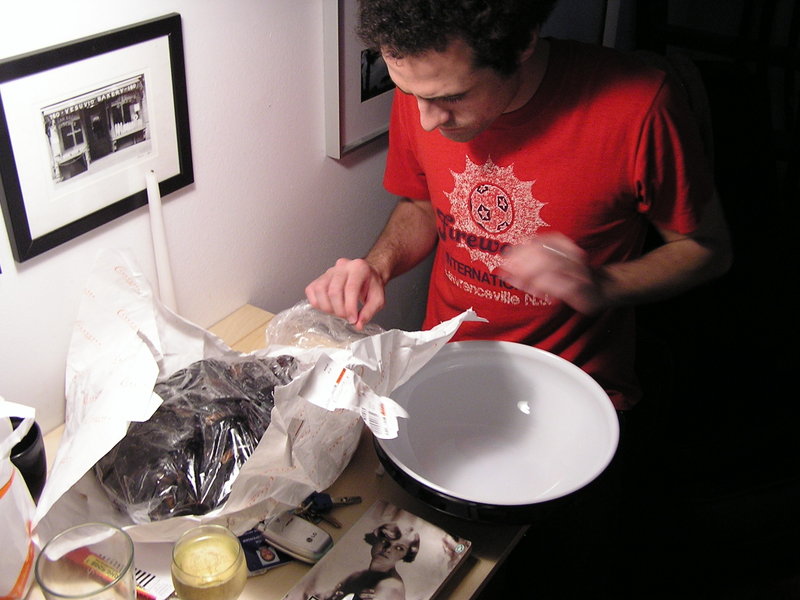 Now, for the recipe: 1 cup olive oil 6 cloves garlic, thinly sliced half a white onion, thinly sliced 1 oz. chorizo (we used more like 2 or 3 oz.  If it’s the soft, non-cured stuff, go with 1 oz.), also thinly sliced 6 pounds of mussels 1 cup champagne (the original recipe uses white wine) 1 bunch cilantro, leaves picked 4 sprigs parsley, chopped salt and pepper knob of softened butter Chop your garlic, onion and chorizo and prep your mussels.  Pour some of your champagne into a glass to start getting the tastes working on your mouth. 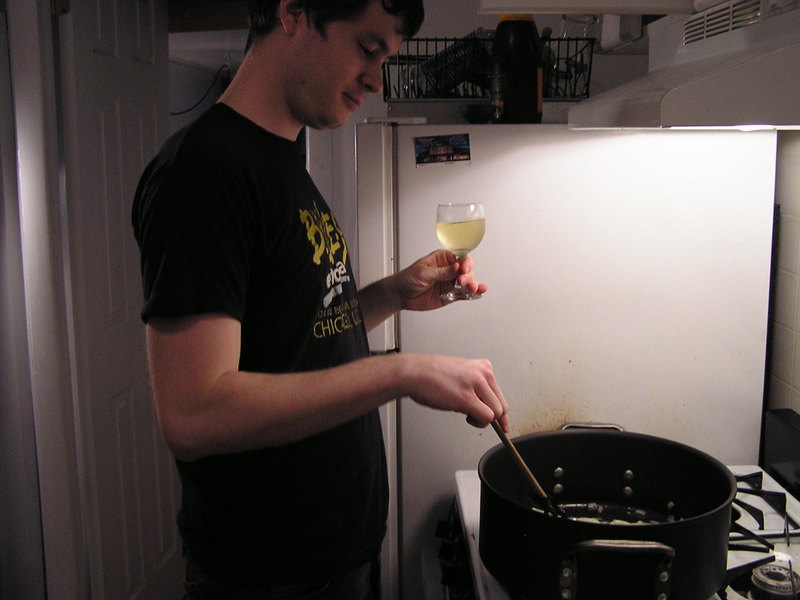 Heat your oil in a gigantic pan that will fit all of your mussels. Alternatively (and this might even be a better idea, we discovered), divide the recipe between two pots so you can have the higher heat which cooks the mussels properly.  Saute the onion first until just turning brown, then add your chorizo and garlic. 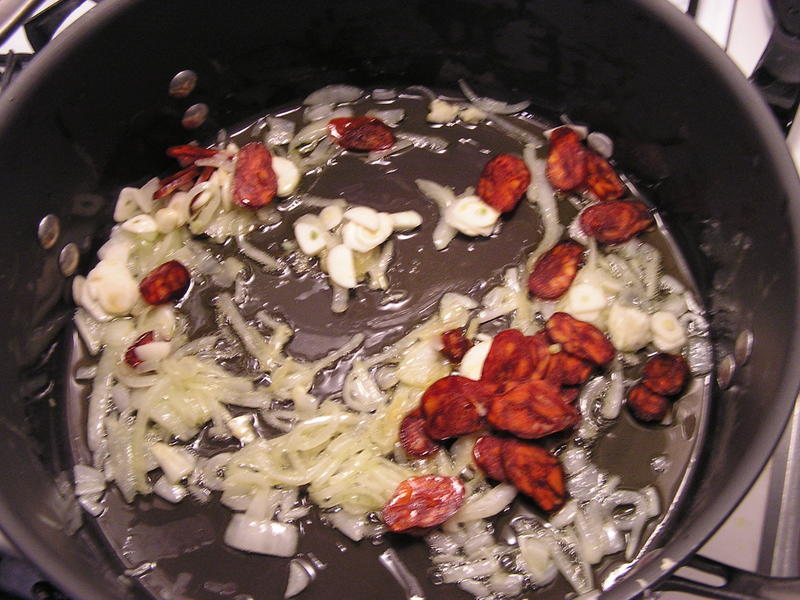 Recruit somebody to start picking the leaves off the cilantro.  Nick asked that we take a picture so his painstaking efforts would be rewarded.  Fair enough. 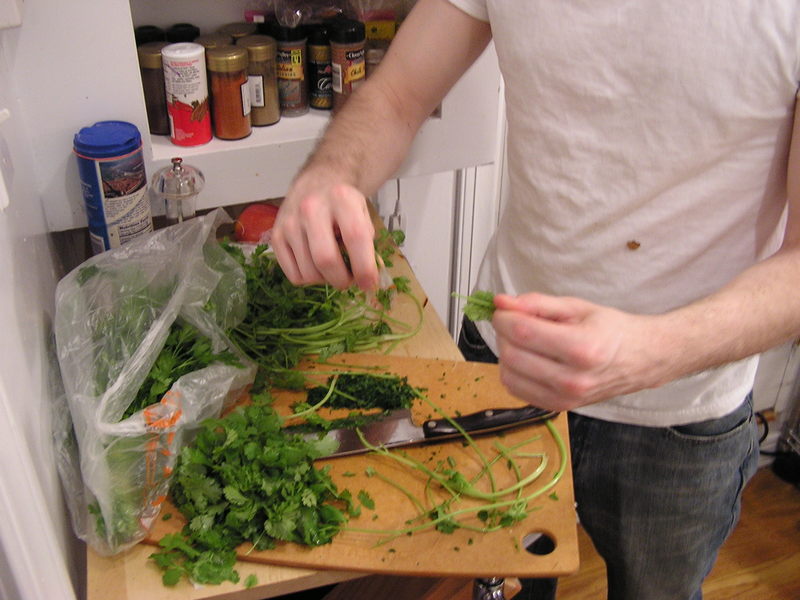 A couple minutes after you add the sausage (and it will start leaking this wonderful smoky-red colored oil), crank the heat up and add the champagne.  It’s going to bubble and fizz and really froth up.  Get your face down in the pan and get a full nose of it. 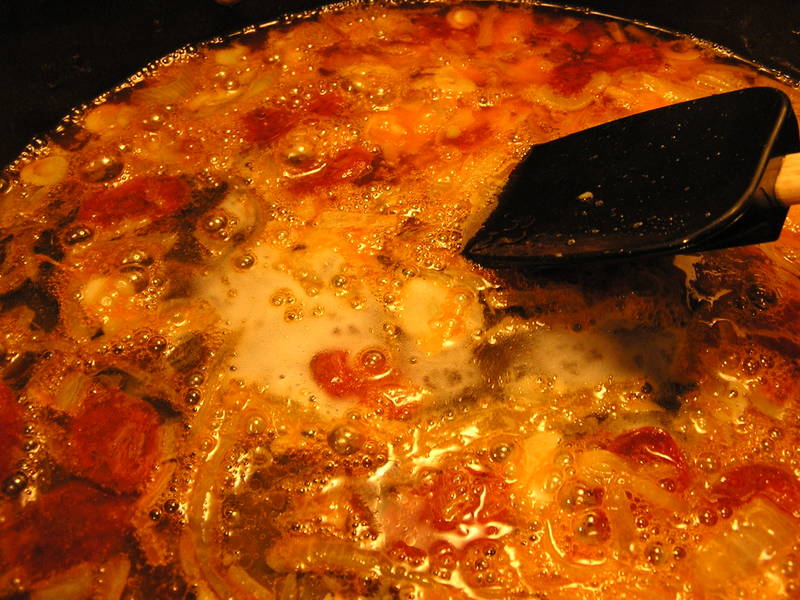 Make sure you season the broth at this point with a pretty healthy amount of salt and some peper.  Especially if you’re using one pan, really crank the heat up--the moment you dump the mussels in you’re going to lose a great deal of temperature which you want to get back as soon as you can. 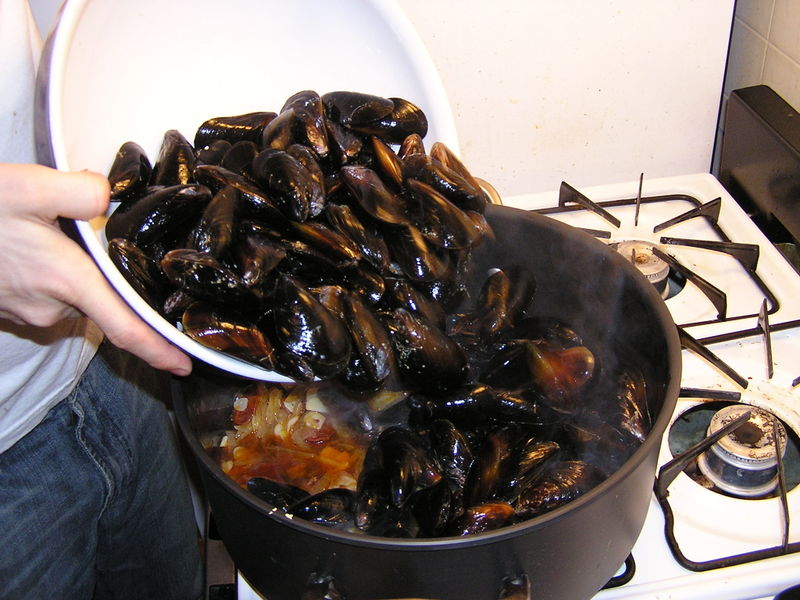 This is where we ran into a little bit of trouble: our mussels ended up opening before they were actually finished cooking.  They should be a good bit chewy, and stay together as one mass pretty easily: if when you open them the guts inside don’t hold together nicely, they aren’t done.  Unlike the general counsel on oysters, which eschews even a single chew chew for the slippery freshness of the throat-slide, mussels are better with the slightest bit of texture, just chewy enough to get a handle on their texture, which makes all the flavor of the broth they’re cooked in explode in your mouth.  Too slimy and they’re not nearly as good. 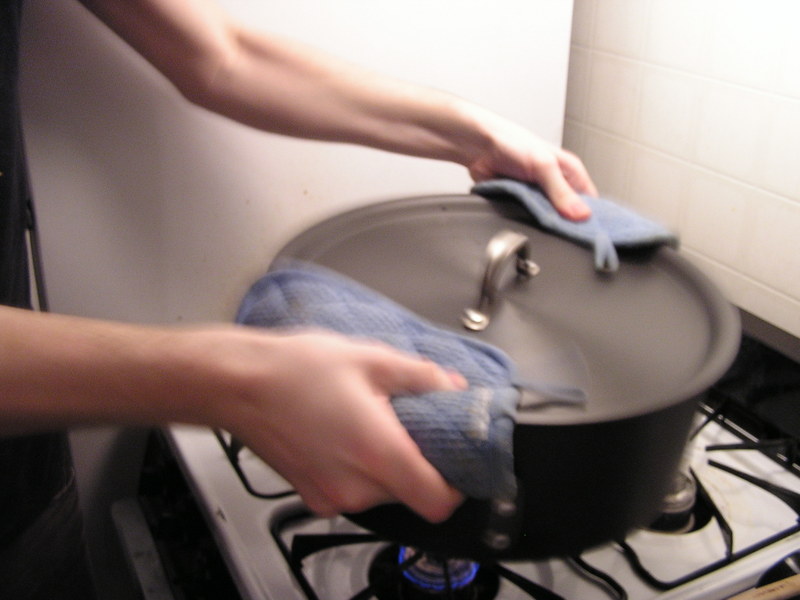 If your pan’s huge, you could even use two burners.  Make sure you put the top on there, and give the things a shake right at the start.  Anthony’s recipe suggests eight to ten minutes, or until they open.  If you were cooking ten of these things in a shallow skillet, they’re be done in three minutes.  Six pounds takes a little longer.  Our problem was that it wasn't hot enough, so they opened but weren't done.  You'll just have to taste one and see.  In the meantime toast some sourdough or other crusty bread, which you’ll need later to sop up the broth. Once they are in fact done, you’re going to take the top off and toss in the fresh herbs, as well as the knob of softened butter. 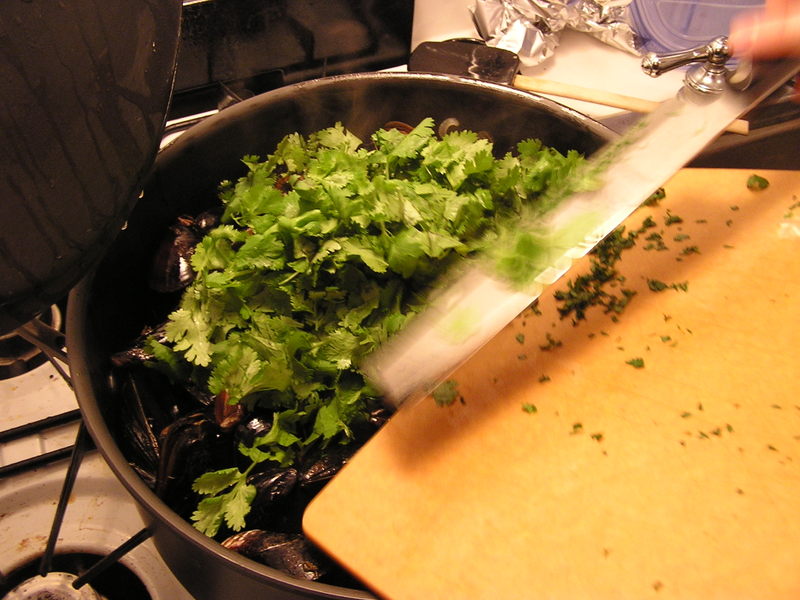 Put the top back on and toss them a while.  Serve right away.  Tell your guests to eat with their hands.  Or one technique: split the shell and separate the halves, taking the half without the guts and using it as a utensil to scoop them out of the other side.  The empty shell also serves as a spoon for the buttery, faintly champagne-dry broth.  Every once in awhile you’ll end up with smoky sausage to throw things into relief.  This is wonderful gourmet eating, and it's remarkably easy, despite the hullaballoo we've made about technique: you're just making a straightforward broth and steaming them. 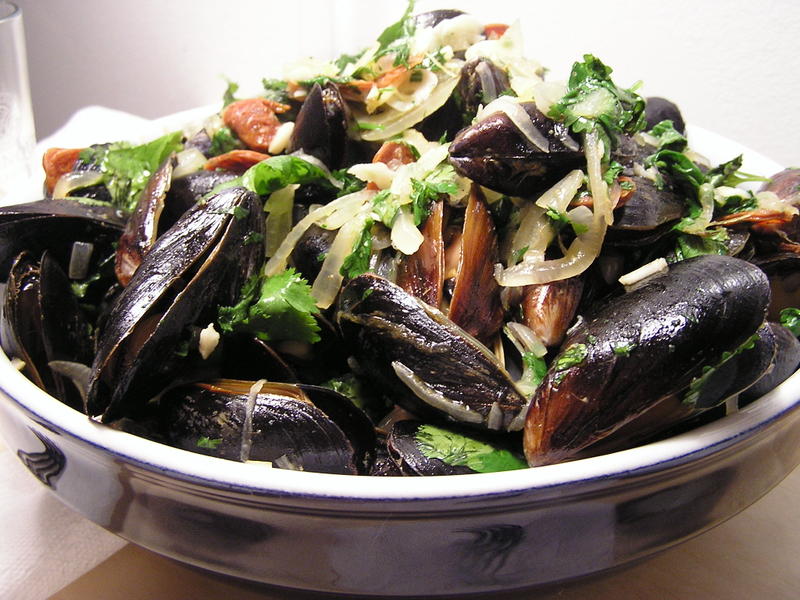 Have a big empty bowl for shells.  More champagne.  And don’t discourage anybody from doing the event occuring in the following picture.  We were swooning a little, considering the taste and the alcohol.  That was when we came up for the title of the post, just after we sang improvised songs about our dish accompanied by guitar.  And we’re not ashamed. 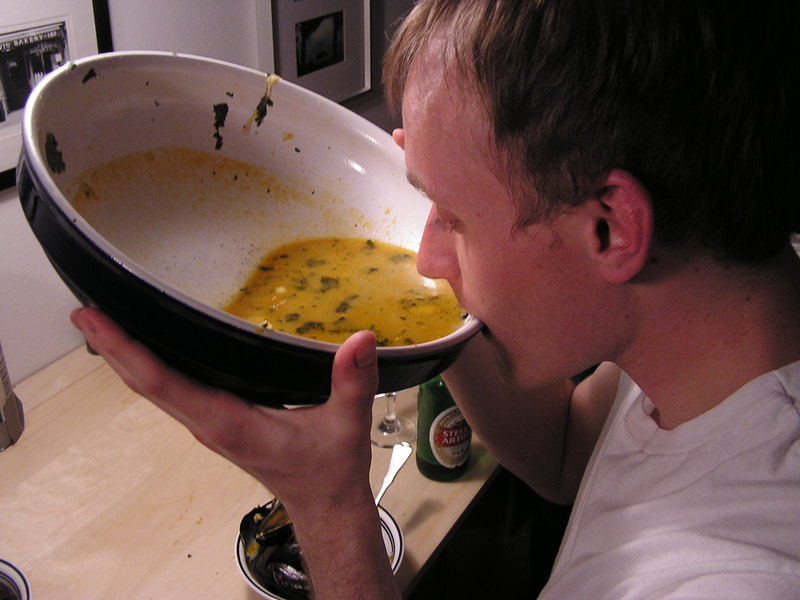