My Chicago: Spicy Yeul Ramyon from the Joong Boo Market

How to dress up cheap ramen. 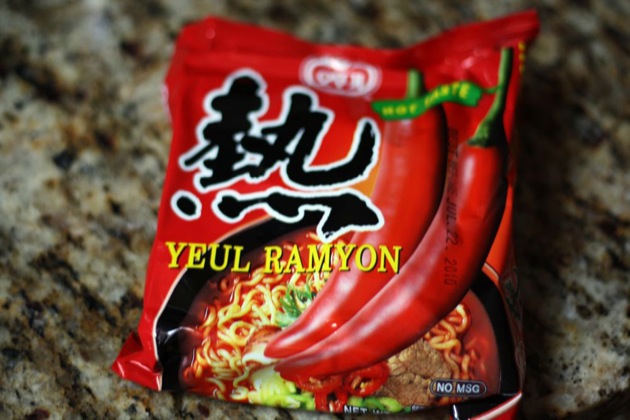 Every Friday, we publish a story about life as a cooks and eaters in Chicago. Markets, restaurants, secret finds, really tasty bites--or just a great story. We're lucky to live here.

Close your eyes and think about instant ramen...I know it's probably been a while. You probably have in mind some MSG-laden bastion of cheap college eating, because that's where I used to be, too.

But now it's different. Now my mind drifts to something warming and wild, with tender noodles and a rich, luscious sauce that is fierce enough to open up the sinuses. Like the typical ramen, it is also ready in 5 minutes, and I'll tell you about it in a moment. I've long since left my college ramen wilderness behind.

The were many reasons I tortured myself with ramen in college, but the main one was that it was cheap (packages of 4 servings were regularly on sale for a single dollar). Taste wasn't the issue. It had the limp consistency of condensed chicken soup, and I'd have to douse the noodles with hot sauce just to get them down. About the best thing I can say is that they kept me alive.

I got burned out. I could taste the heavy metallic tinge of MSG while I was sleeping. I had no concept, obviously, of real ramen, which I would first experience at a place called Wagamama's in London: the deep bowls filled with rich broth, the fresh herbs, the fish cake, or the roast pork. I never knew about the slurp of perfectly tender noodles, or that warming feeling on your cheeks after you polished off a bowl. 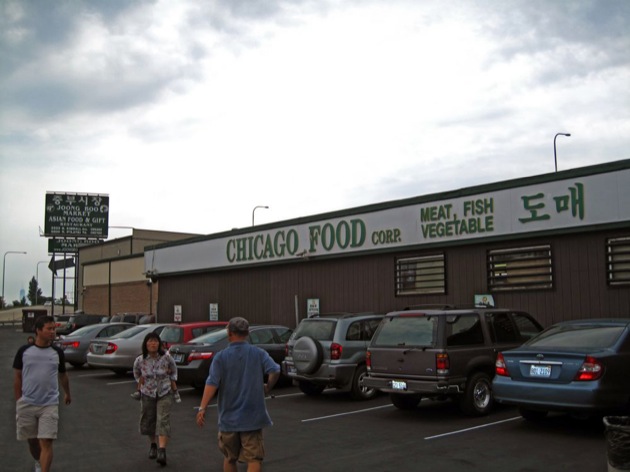 I'm here to tell a story about a better instant ramen, one that's worth eating and writing about. The recommendation came to me from Brian from Daily Ikura , who casually recommended a packaged ramen that he liked while we were at the Joong Boo Market. This wild Korean grocery store is also known, hilariously, as the Chicago Food Corp. It rests nearly underneath the roar of the Kennedy Expressway, right off Kimball. It can best be described as frantic. Cars rush around for rare open spots, zooming around darting customers, runaway shopping carts, and other brave cars. It's where I go to stock up on kimchi, tofu, and this mad Korean soy sauce that is to Kikkoman what a real Ragu is to Chef Boyardee. Blake and I used it recently to buy salted shrimp for our Kimchi Ferment-off . It's one of the only places in the area where you can buy shrimp with their heads still firmly on. It's a gift to Chicago eaters.

They stock this wonderful ramen that I love. Called Yeul Ramyon, it is one of what must be a hundred different brands and flavors. I have no idea how Brian found it. But after sampling a few others, it's the only one I like. It's flavor profile isn't mysterious muted "chicken" or "pork", but a vibrant chile assault with a heavy green onion bite. Instead of draining the water off the noodles, its liquid is left in to create a big bowl with a pseudo-broth.

It's pretty good when mixed up straight with boiling water. But it's best when it serves as a base for other ingredients. Kimchi doesn't hurt, neither does a healthy spoonful of red bean paste which gives it a touch a sugar and a more rounded flavor. Fresh scallions will help wake it up. You can bulk it out with tofu or even some sautéed mushrooms. But I always finish it an egg whisked in at the very end along with a drizzling of sesame oil. The tiny scrambled shards give the soup a luxurious body and the oil perfumes it in a way that's about as far from packaged ramen as I could imagine. The result isn't the perfection you'd find at something like Urban Belly , but for a simple and very cheap lunch, it's probably the best meal you can find for under a dollar. 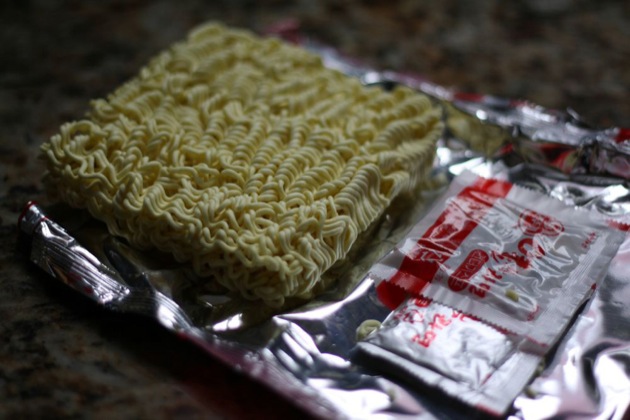 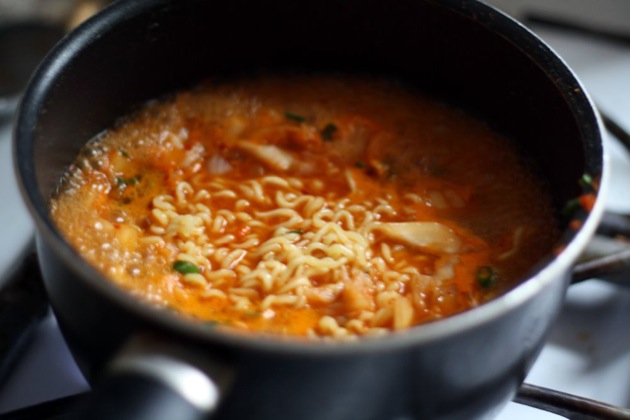 Bring 2 3/4 cups of water to a boil in a medium pot. Add the noodles, the two flavor packets, kimchi, scallions, and red pepper paste. Cook for 4 minutes, stir occassionally to break up the noodles. 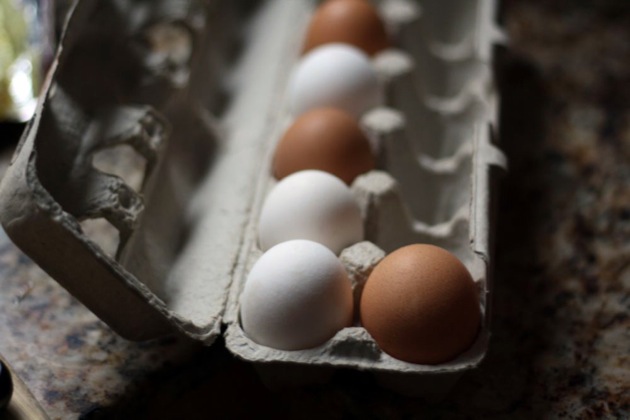 Meanwhile, crack the egg into a bowl and whisk until just combined. When the four minutes is up, slowly whisk the egg into the soup. 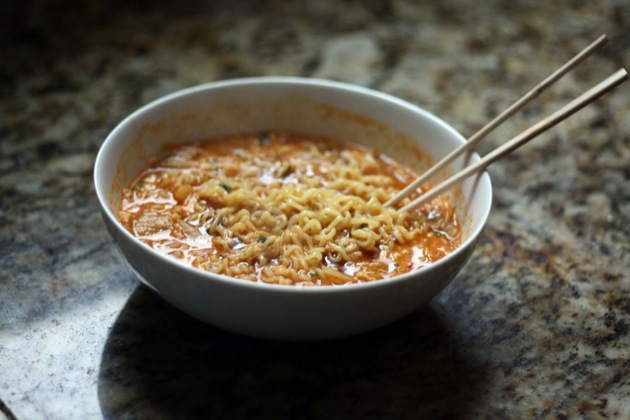 Transfer the soup to a large bowl and drizzle with the sesame oil. Serve.