There Will be Blood. Sausages. 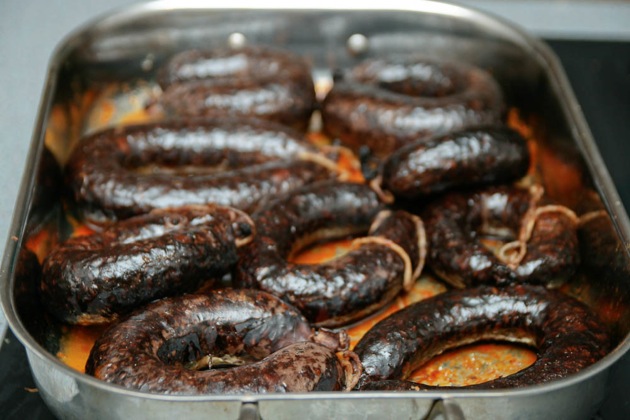 Last year I fell in love with blood sausage.  Maybe that sounds strange.  So let me explain.

In Estonia, around Christmastime, they begin to fill up the meat counters, black and smooth. Just piles of them.  When Christmas comes, everyone roasts pork and potatoes, makes sauerkraut, and serves them with blood sausages.  And it wasn't until I had them as apart of this ritual that I began to understand.

Blood sausages are a celebration of the pig's life and the bounty it brings. When the animal's life is ended, nothing should be wasted. In Estonian, they are known as verivorstid , which literally means "blood sausages." (The Estonians are straightforward people: they're not like the English or French, who sidestep the issue by calling it "black pudding.") This year, I wanted to recreate them for Christmas at my wife's parent's house in Indiana.

The making of blood sausage in her family is nothing new, and has a certain lore. Early on, I was regaled with a story of my father-in-law answering the doorbell in 1983 with blood up to his elbows--opening the door to a couple of surprised members of the International Police. With shocked faces, the Interpol agents were able to regain their composure long enough to state their business (following up on someone who had rented the house and evaded taxes on an RV). The measured response--"let me just get this blood off my hands"--was about the perfect, and only, way to respond.

My problem was finding pig's blood. It's illegal to sell it these days, at least to the public. I called butchers all over Chicago and between here and Bloomington, Indiana, who all gave me the same answer. I even got close with a pig farmer in Southern Indiana who ended up backing out at the last moment for fear of retribution. What was I, buying illegal arms? 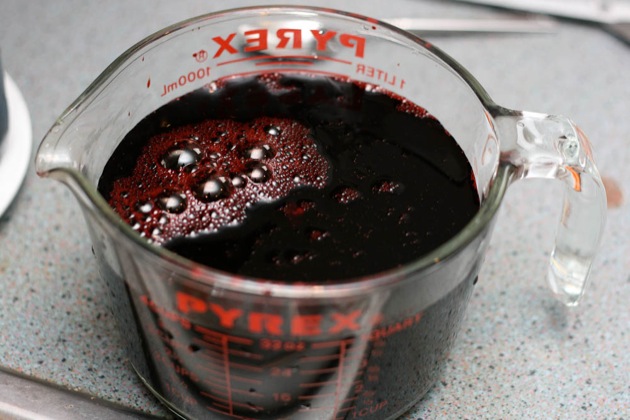 Have you ever read Stuart Dybek? He's a wonderful Chicago writer who writes magical stories about urban life. Looking for this blood, I thought back to his story called "Blood Soup" about a couple young kinds looking all over Chicago for duck's blood to make a traditional Polish soup for their dying grandmother, as she believes it will cure her. There's something very strange and dangerous about calling around asking for animal blood. There's an understanding between parties that something serious is at stake.

I know you're expecting all the gory details, or for me to go on about the gross-out factor. But blood sausage is actually really natural and wonderful when you think about it. While I admit that the concept might be frightening, this is one of those foods that will really surprise you once you taste it. Meaty without the texture, not at all metallic like you might imagine if you've ever sucked on your cut finger, deep and rich. Similar preparations exist all over Europe--black pudding in England and Ireland, boudin noir in France, morcilla in Spain--each made of blood mixed with grain to hold the sausage together.

Eventually, I had to settle for beef blood, which is legal to buy and sell. Why beef blood is okay but pork blood isn't, I couldn't say. But I was assured that it would behave just about the same way, and Paulina Meat Market, who sold me a gallon of the stuff, said it's what they use for their own blood sausages.

I picked it up on the day we left town--it was frozen--along with a tub of hog casings for making the sausages themselves. The next day, armed with a funnel, we spent the day boiling barley, sauteing salt pork with onions, stuffing the casings, and poaching them in water. A couple days later, we crisped up the sausages in the rendered fat from a gorgeous leg roast until they were hot and steaming and crisp all over.

This is the story of how we got there. 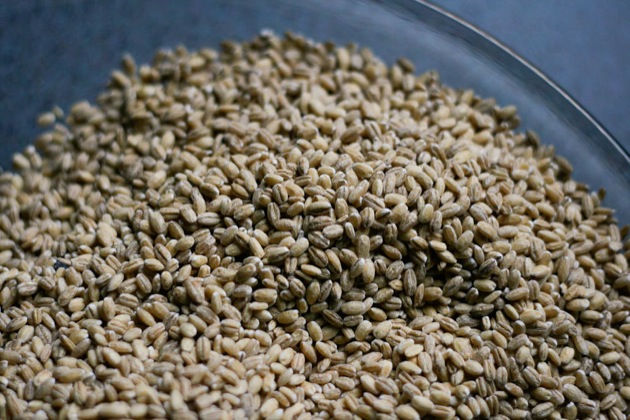 All blood sausages have some kind of grain in them to give the sausage some shape and absorb some of the blood. In Estonia, they use barley.

First, bring a large pot of salted water to boil and boil it for about 45 minutes, until tender. It will take a while so get that started right off. 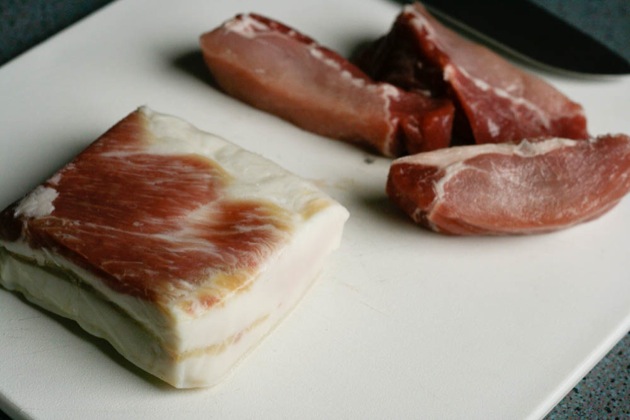 While that cooks, take the fresh and salt pork and cut it into 1/2-inch chunks. These are going to provide the main flavor of the sausage, and you want the pieces small enough to fit nicely into the casing, but not so small that you can't taste them.  [You'll notice above that we used salt pork and fresh pork which wasn't belly. After making these, I think the belly would be a better cut.] 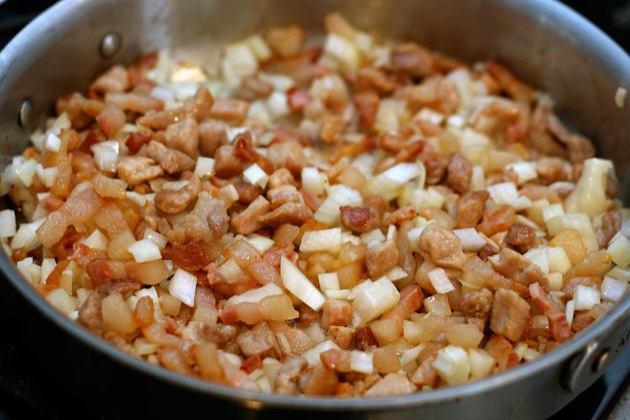 Combine all the pork in a saute pan with plenty of room for it all -- cook in two pans if necessary. Start it over medium-low heat with a splash of water. This bit of water will help the fat begin to render from the pork, so that it will become its own cooking medium. Once the fat begins to render, increase the heat to medium and continue cooking as the pork begins to brown.

At some point, you'll notice that substantially less steam is coming out of the pan, and it's doing more sizzling. This means that most of the water has left the pan and you're ready to add the onions. Toss them in and continue cooking until the onions are soft and browned. Altogether this sauteeing process should take a half hour or more. 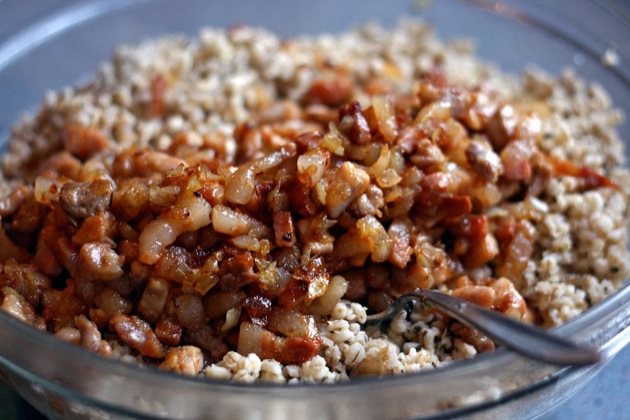 When the barley is tender, drain it and transfer to a large bowl. Add the dried marjoram and salt, then scrape in the cooked pork and onion mixture. Make sure to get all the fat from the pan into the bowl, as that's extremely important for good flavor. It's a good idea to throw some of the barley into the pan to soak up the last of the good juices and bits.

Stir the pork and barley and spices together well and allow to cool. Taste for seasoning--it should be at a salt level you'd like your sausages to be. In a little while you'll add the blood, and then you can't taste it for salt anymore.

Make sure the barley mixture is completely cool before pouring in the blood, otherwise you risk coagulating the blood and ruining everything. 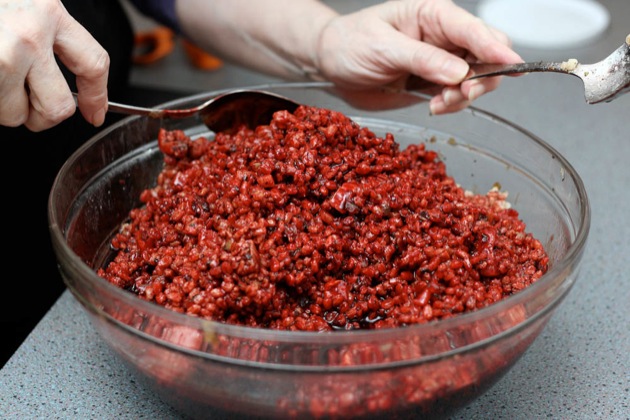 Pour it in and turn it into the barley carefully. You don't want to jostle it around too much and create foam.

The nice thing about working with such a liquid-y sausage is that an expensive sausage stuffer isn't necessary. Also, most of the risks of sausage-stuffing don't apply: You don't need to worry about working the meat too much and thereby making it dense and unappetizing, and you don't need to worry about the filling getting too warm so the fat emulsifies.

First, get a large pot of water simmering on the stove, which will be used to poach the sausages, the first half of their cooking. 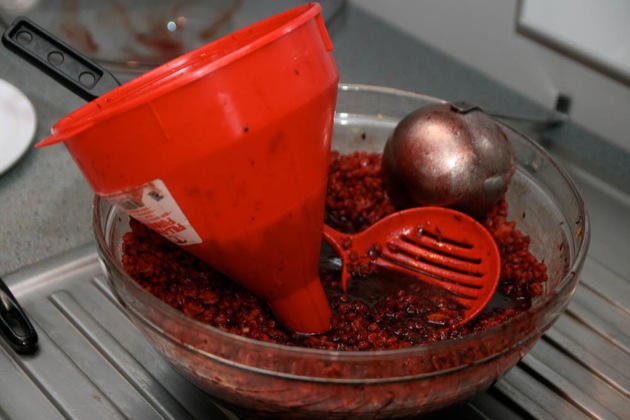 All you need, really, is a funnel and some kind of round implement to push the blood mixture through it. The handle of an ice-cream scooper worked particularly well. The funnel was from the hardware store. 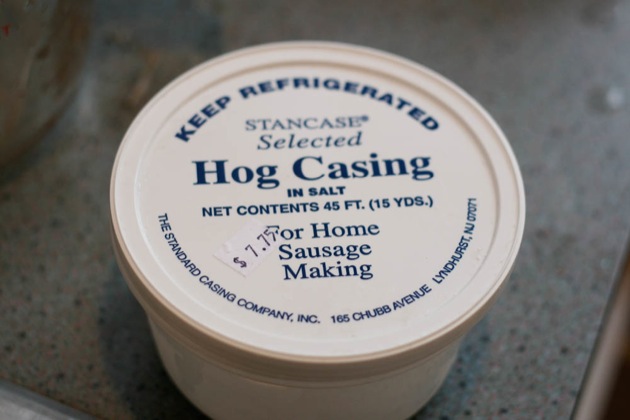 First, you need to prepare the casings. They should we rinsed very well and soaked in a couple changes of water before using. 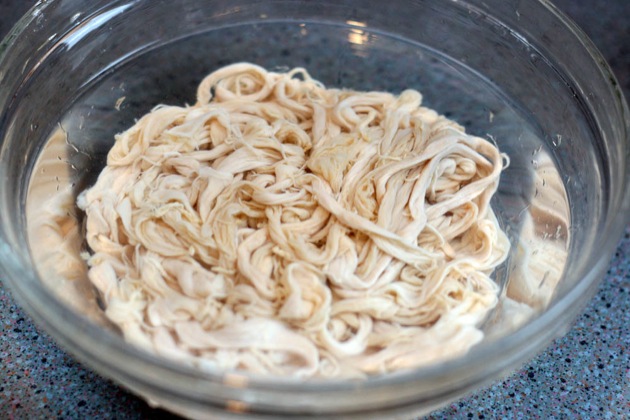 Cut them into 18-inch lengths and put them in a bowl nearby. 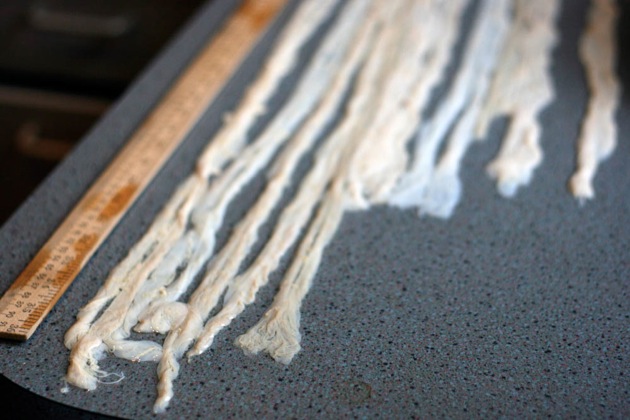 To begin, take a stuffing and work one end of it open so you can get a finger inside. This next part is a little obscene, but necessary: holding the end of the casing open, blow into it to inflate it completely. Don't put your lips on it! Just blow into it from a distance of a couple inches.

Next, fit it onto the funnel's tube and hold it firmly there. It's easier with two people: one to hold the casing to the funnel, the other to scoop the mixture into the top. One person needs to push it down into the casing, while the other works the mixture down the casing so it doesn't clog up near the top.

The casings should be filled less than three-fourths full and not bulging. When they cook the filling will expand, and if it's too full it could burst during the poaching process. This can be rather disastrous with such a viscous sausage filling. 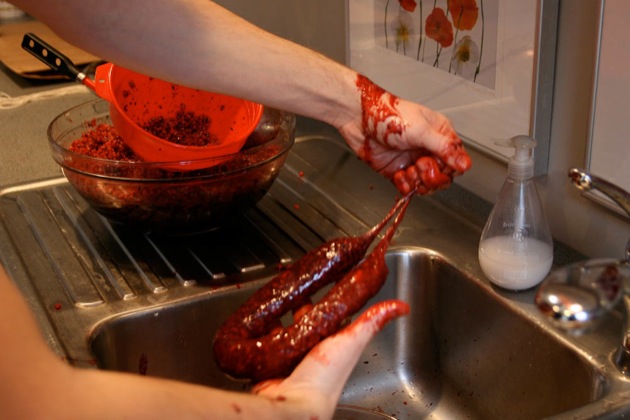 Leaving plenty of empty casing on both sides, wrap a short length of kitchen twine tightly across both open ends and tie a tight square knot. Lower them carefully into the simmering water, ensuring it's not boiling and set a timer for 15 minutes. 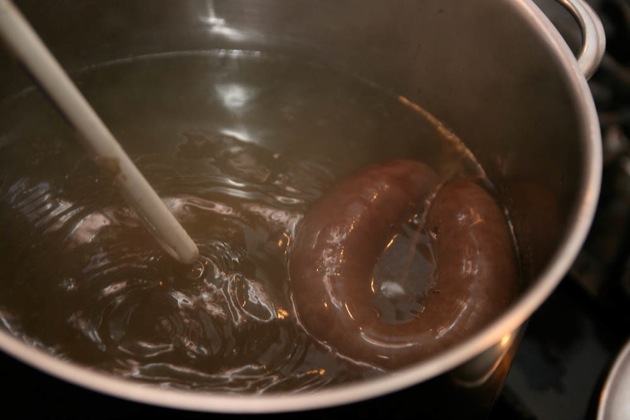 If the sausages float, they probably have an air pocket. After 5 minutes, once the blood has had time to coagulate, puncture the air pocket carefully with a pin or small knife. The sausage may leak a little bit, but it will repair itself once the escaping blood coagulates in the hole. 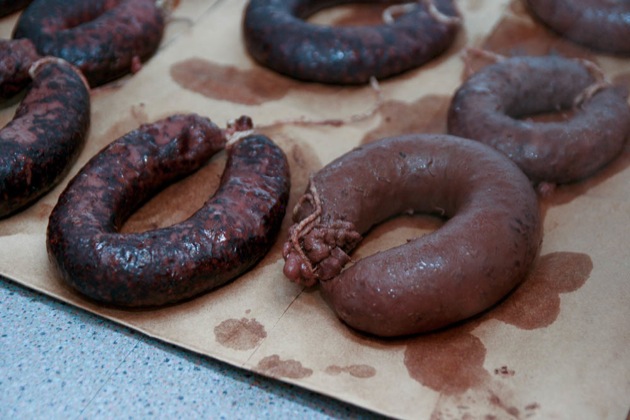 After 15 minutes, remove the sausage carefully and allow to dry. It can now be cooled and refrigerated for two or three days until the final cooking, or used immediately. 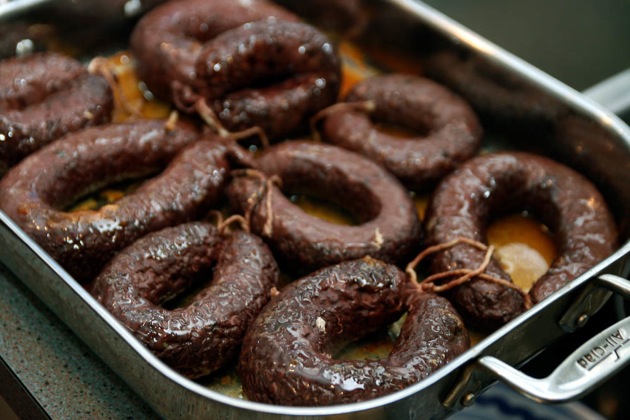 The final stage of cooking is essential, where the sausages crisp up in the oven. The contrast of textures--crisp skin with smooth interior--is hugely pleasurable, and a large part of the sausages' success.

Traditionally, a large roast of pork will be served at the same time. Christmas was a time of festivity, and so Estonians would wait to slaughter a pig until then, serving both a roast and the sausages, plus sauerkraut, and roasted potatoes. The accumulated fat and juices from the pork roast are the ideal medium in which to cook the sausages, which is what you see below.

However you could also roast them separately with plenty of lard and perhaps some thin slices of salt pork or bacon draped over them. They need about an hour at 350F. 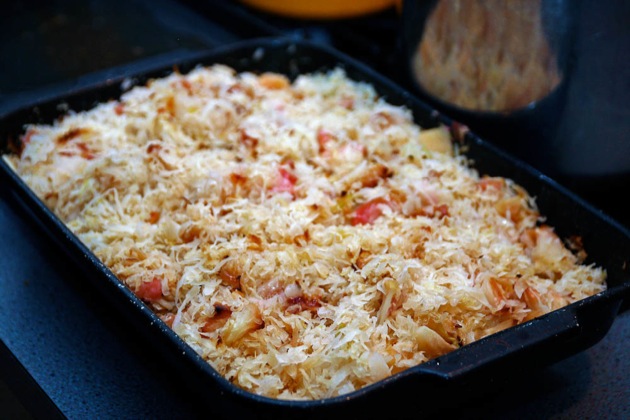 We had a huge tray of sauerkraut with apples and a slow-roasted fresh ham, and of course the potatoes. There is something eternal about the combination of pork, potatoes and sauerkraut. 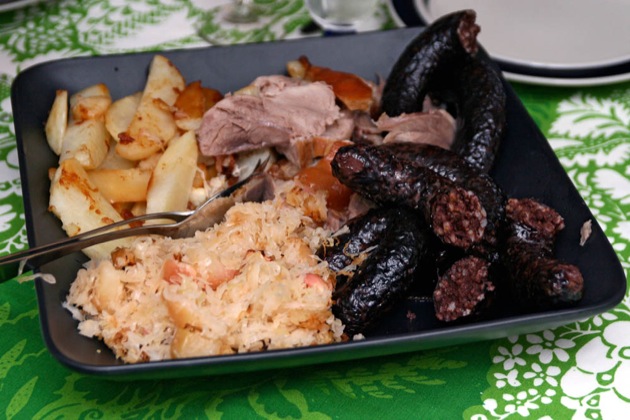 The flavors were good enough to build the cuisines of half of Eastern Europe--rich pork, creamy potatoes, the deep tang of sauerkraut. The blood sausage fits right in. They are meaty in the way the pork isn't, and it's welcome.