Where to start your Sichuan obsession. 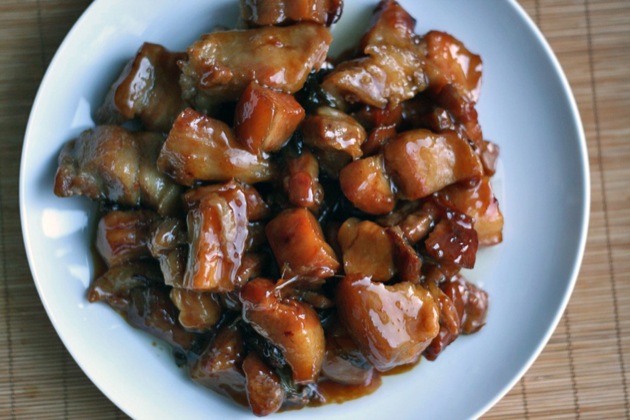 For awhile now, I've been looking for a way into Chinese cooking. The whole business of it feels impenetrable. Strange flavors, ingredients, and cooking techniques, and no ability to rely on what I've already learned about Western cooking and improvise. Then there's the problem that you can't accurately call anything "Chinese cooking," because China is made up of provinces with different recipes and methods. They're similar, but not the same -- it would be like talking about "European cooking," lumping together the sausages of Germany, the sauces of France, the pasta of Italy.  All this means I don't know where to start.  I want to understand it from the ground up, rather than cherry-picking recipes without context.  But where to begin?

Well, to put it simply: start with Sichuanese cooking.  By most standards, it is the most famous in China. The saying goes, according to Fuchsia Dunlop in her Sichuan cookbook Land of Plenty , "China is the place for food, but Sichuan is the place for flavor." It is known especially for its hot and numbing dishes, anchored by the Sichuan peppercorn, a marvelous ingredient that has the power to spread numbness across the tongue and lips. Yet rather than allowing you to taste less and lose interest, it is instead becomes intoxicating. Its heady, extraordinary fragrance envelops your head, and all you want to do is eat more of it. 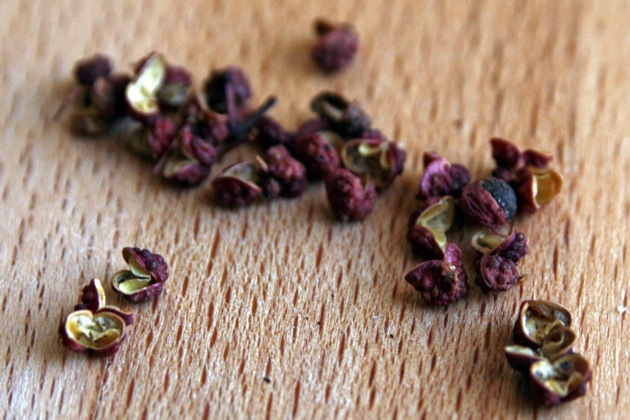 This numbing sensation is a mystery to flavor scientists. Recently there was a long article in The New Yorker by Raffi Khatchadourian all about the science of creating flavor, and they mentioned this sensation, quoting a research scientist the flavor company Givaudan . "There is a chemical that evokes that sensation on your tongue. It is found in the Szechuan chili, and that is a unique sensation. It's not cooling, it's not burning, it's not warming. It is truly tingling." When it comes to sensations on the tongue, it's pretty unique: most flavor we "taste" is with our noses. For example, the aroma of the Sichuan pepercorn is woody and citrus-y. But the tongue itself can only sense bitter, sweet, salty, sour, and the fifth taste known as umami , that sort of meaty, brothy roundness we associate with sauteed mushrooms. (In China, this umami taste is known as xian , but since a Japanese scientist discovered it, we use the Japanese word.) Nothing else evokes this odd numbness.

Last weekend, Nick took Elin and me to Lao Sze Chuan , in Chicago's Chinatown. It's probably the most famous restaurant in Chinatown, especially for what patrons fondly call "crack chicken," little nuggets of fried chicken that you simply will not stop eating if they are in front of you. We had an extraordinary meal that turned my idea of Chinese food upside down--from the crack chicken to slivers of tender-crisp lamb imbued with heady cumin. As we devoured everything, the spreading Sichuan numbness enveloped us all.  And we were happy.

I knew I had to start cooking Sichuan in my own kitchen.

Often when I read Sichuan or other Chinese recipes, the ingredients list scares me off. I realize that to start cooking Chinese, I need to commit fully, purchasing a slew of pantry items like fermented black beans, black vinegar, and of course the Sichuan peppercorns (which are not actually peppercorns but come from a shrub in China). But when I stumbled on this recipe in Dunlop's Land of Plenty --which is a marvelous, thorough book on Sichaun cooking and highly recommended--I knew I could make it almost immediately. It doesn't have the famous numbing peppercorn, but it did sound delicious: a slow-braised pork belly, meltingly tender and glazed with a sweet-salty sauce of soy sauce, stock, and brown sugar. The prominent spice is star anise, which is relatively easy to find and has a subtle licorice flavor that fits well with all the flavors.

The result was porky gloriousness. It is very rich and concentrated, and best consumed as part of a whole meal of Chinese dishes, such as stir-fried greens and a mountain of rice. Just three or four pieces of this would be plenty per person. Best of all, the process is basically foolproof: throw everything into a pot and simmer on low heat for 2-3 hours until the pork is falling apart and the liquid has concentrated into a glaze.

-serves 4 with other dishes to round out the meal- 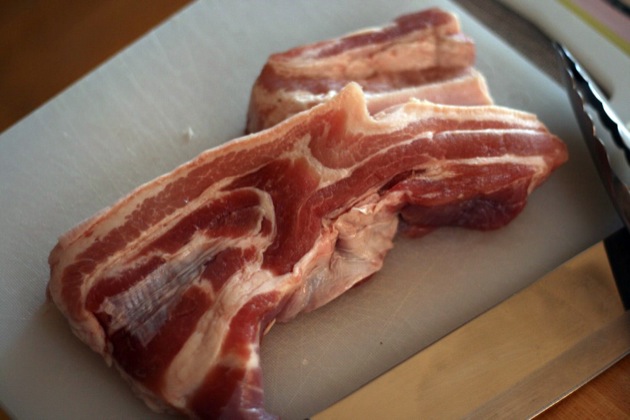 First, Dunlop suggests blanching the pork in water for a couple minutes to remove some of its impurities (the same stuff that floats to the top of stock when you first start making it, that foamy stuff.) 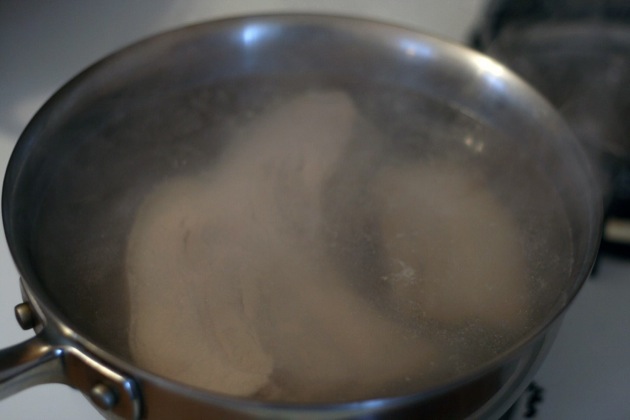 This is indicative of the Chinese cook's desire to remove all off and impure flavors from meat, "known collectively as yi wei ('peculiar smells')." It's not completely necessary, but I didn't see a reason not to follow that lead.

Remove the pork and rinse it with cold water, then slice into bite-sized pieces, taking care to make sure each piece has a variety of textures and layers of fat, meat, and skin. 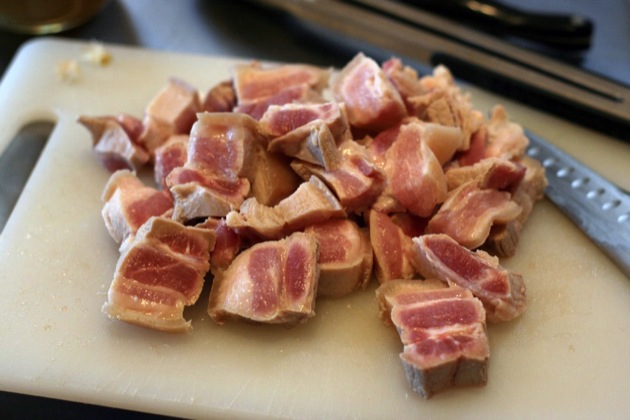 Another quick Chinese cuisine lesson to be learned here: everything should be bite-size for serving. They don't use knives at the table, and though it's acceptable in eating etiquette to bite off a piece of something while holding it in your chopsticks, it's generally preferable to make sure everything you serve it bite-sized. 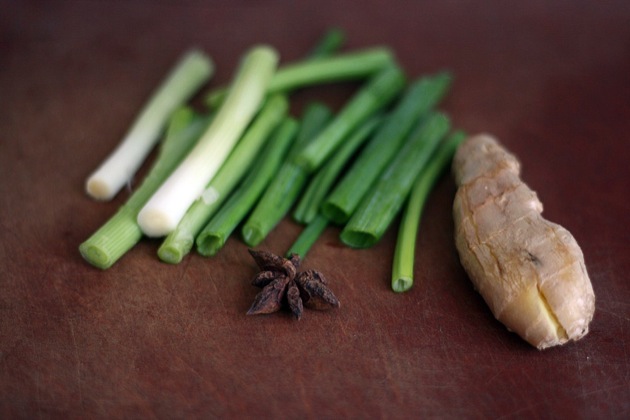 Next, prepare the vegetables: slice the scallions into three or four pieces and crush the ginger gently with the flat of a knife to crack it open and allow its aroma and flavor to seep into the stew.

In a large heavy pot, ideally large enough to allow the pork pieces to sit on the bottom in one layer, heat the oil over high heat. It will take a couple minutes for it to get hot enough: you want the oil to be on the verge of smoking. Carefully, watching for splatter, slide the pork into the pot and spread it out evenly. Brown over high heat for a couple minutes, then add the stock and all the remaining ingredients. Stir will to combine and bring to a boil. 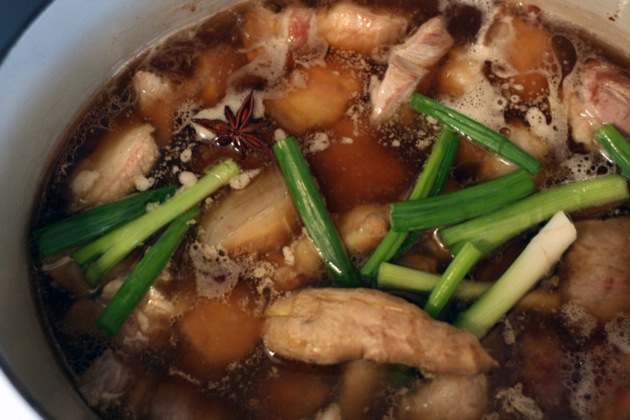 Once it's boiling, lower the heat to a simmer and cook, uncovered, over a very low flame until the pork is tender and the liquid has evaporated into a thick sauce or glaze. Stir from time to time. 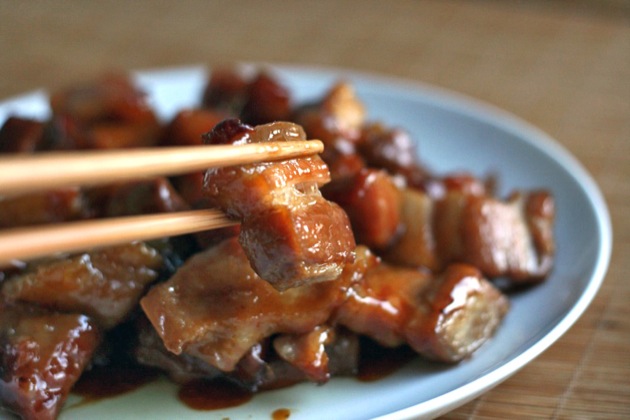 Serve with rice and vegetables, such as stir-fried greens or green beans.