Rules for success, including porchetta 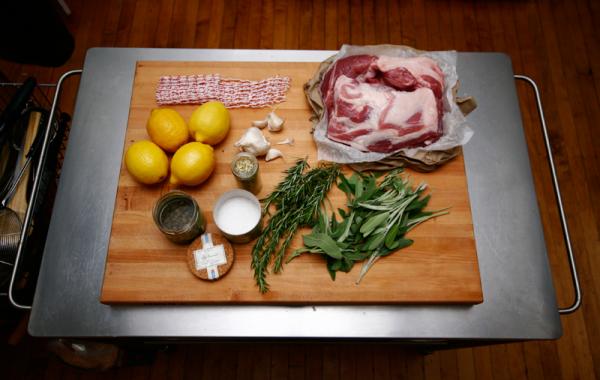 Ed. note: This is the third post in a "Repertoire" series on the interplay of food and style, with our friends The Midwestyle . We're helping their readers learn a few recipes, and they're teaching us a few things about doing it in style.

To say you’re an accomplished person is putting it lightly. That time you summited Kilimanjaro during a snow storm. The month you took a vow of silence. The day all the stoplights turned green.

You’ve been places, you’ve seen things, and you’ve got most situations in the bag. But the thought of hosting a dinner party? Crippling. Like trying to throw a punch under water. There are Nobel Prize winners who would buckle at the thought of preparing a meal for friends and having to sit there and face them while they eat it.

Having hosted more than few gatherings, we've learned a few things.  Call them rules, or guidelines.  We think they might be a helpful starting point.

And if nothing else, learn to cook porchetta. You won't regret it. 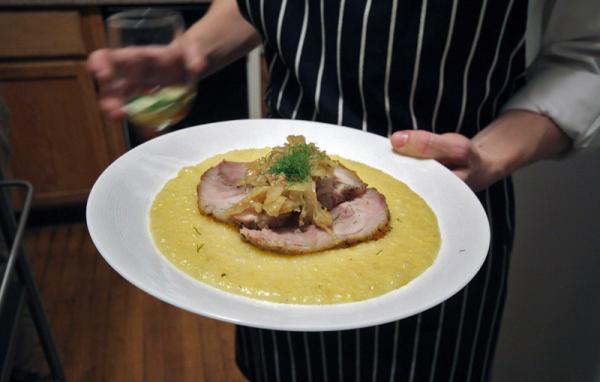 The rules, in no particular order.

Roast something. Inviting people to eat requires skill, timing, and artfulness. Roasting takes tremendous pressure off one of those things; with a thermometer and a few basic tips, the timing of the meal becomes far more forgiving.

Toast something. Let's bring it back. Toasts are a delicate alchemy. They require a strange combination of humor, truth and unspoken permission from your audience. They’re hard. Which is why people respect a good one. You have to make them laugh, steer a wide berth around cliches, and remain earnest. The formula: start out polite, transition to funny, and end with something true. Best bet is one you’ve spent enough time preparing that it seems effortless. But really, all that's required is a simple and genuine thanks for showing up. 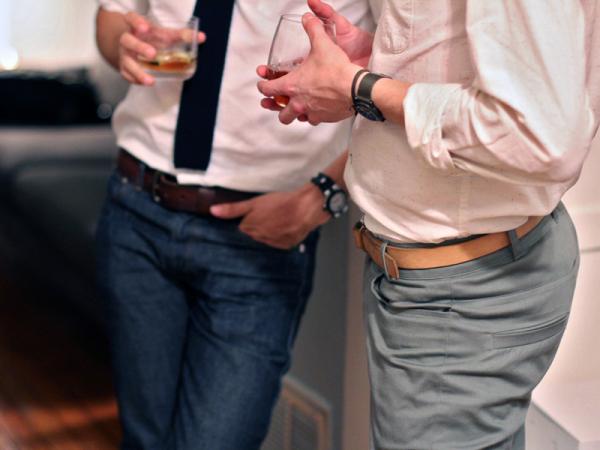 The guests will be as calm as you are. There’s no easier way to ruin a party by being nervous, which of course makes it even harder to be relaxed. You set the tone, and if you’re unflappable, so your guests will be. Speaking of which... On drinking. With moderation and good timing, a drink or two can take the edge off. Sip while you cook, to give yourself a head start, but then cut it off. You want the right level of alcohol to relax, but not so much that you become incompetent (or, god forbid, incontinent). When guests arrive, everything will be jolly. Give them something immediately to put in their hands to soften your lead. Then, before you get sloppy and turn into a lousy conversationalist, pull back the reins. Put another way: Drink early, but not often. 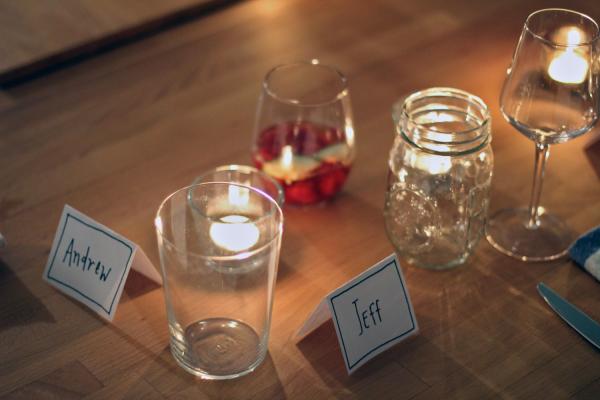 Embrace the performance. Dinner parties are funny things. People are watching themselves and watching each other, and that’s okay. The cast of a dinner party will always be new (if it’s just close friends over for a meal, it’s not a dinner party), so the dynamic is unfamiliar. Nerves are a good thing.

Never mention your own cooking. Whether you’re fishing for compliments or lamely apologizing for the “dry meat” you’re lowering the tone. Take Julia Child’s advice: “You should never apologize at the table. People will think, ‘Yes, it’s really not so good.’” If the food is great, it speaks for itself. If it sucks, don’t mention it. They won’t remember. 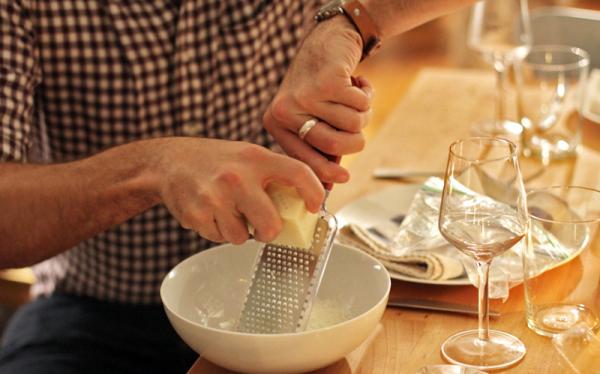 Greetings and farewells. Much like giving a good compliment, hellos and goodbyes are best when simple and heartfelt. You’re excited they’re here, you’re so pleased they enjoyed themselves, and you hope to see them soon.

And if you’re the guest, bring a gift. Hosting a dinner party is a sacrifice of time, money and energy, so offer something that shows you appreciate the effort. Booze always fits the bill. Though if you’d like to take it to the next level, bring something that reminds you of the host. It shows you’ve paid attention. Bonus points for a handwritten note the next day.

And now, about that roast...

In Italy, porchetta is made by stuffing a whole pig with garlic, fennel, wild herbs, and heavy amounts of salt and pepper; it's then rolled up and spit-roasted slowly over wood. Thankfully, it's almost as delicious on a smaller scale. Serve the pork shoulder with creamy polenta, also something than can be made in advance. A standard for the repertoire. File under: You Can’t Go Wrong With Rustic Italian.

Adapted from The Zuni Cafe Cookbook by Judy Rogers* 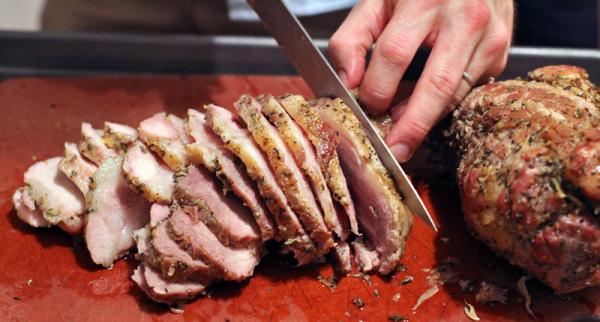 *Possibly one of the best cookbooks in the world to learn from. Highest recommendation.

Lay the pork out on a cutting board and examine the natural seams in the meat. Using your fingers and the tip of a knife as needed, excavate the seams to expose as much internal surface area of the pork as possible, carefully freeing the muscles along their natural separations. Season the pork inside and out with salt. 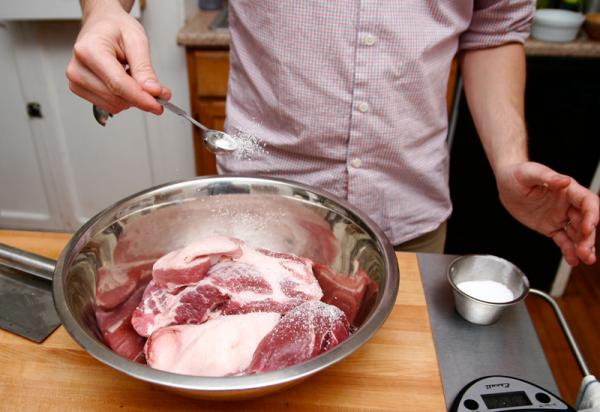 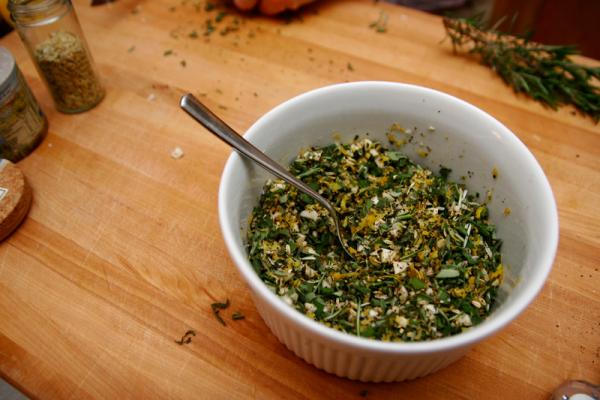 Pack the herb mixture into the crevices of the pork, rubbing it into the meat and ensuring the seasoning reaches all the exposed surfaces. Using kitchen string (or if your roast came with a net, use it) to tie the roast back into its original shape. It should take 4-5 strings crosswise and one lengthwise to accomplish this (for detailed tying instructions, see this post on making lamb pancetta). An even shape will also cook evenly. 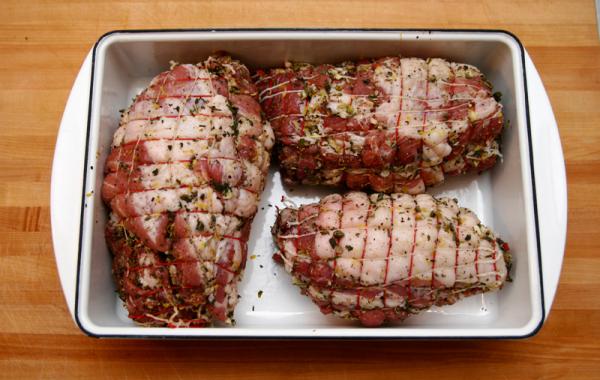 Cover, refrigerate, and allow the seasoning to penetrate the meat, at least 1 day and up to 3.

Heat an oven to 350 degrees Fahrenheit. In a large (14-inch) ovenproof skillet or roasting pan, heat the olive oil over medium heat until shimmering. Add the pork (it should sizzle) and transfer to the oven. Roast, uncovered, for an hour (the pork should begin to color; if it hasn't, up the temperature to 400.)

While the pork roasts, bring the water to boil in a large saucepan, then pour in the polenta in a slow stream while whisking to prevent clumping. Once it's all added, add the salt and reduce heat to low, stirring often as it thickens and the cornmeal becomes creamy, 25-30 minutes. If it appears too dry and the cornmeal is not yet soft, add more water and continue cooking; you can always cook it longer to evaporate any excess water. Once soft, turn off the heat until ready to serve. To finish, reheat and stir in butter and Parmesan.

Meanwhile, halve the fennel lengthwise and cut out the core. Put the halves cut-side down and slice thinly crosswise. Toss with enough olive oil and salt to coat it nicely.

Once the pork has been in an hour, use tongs to flip it over and tuck the sliced fennel into the roasting pan around the porchetta, tossing it well in the roasting juices. Return the roast to the oven and continue cooking for another 1 to 1 1/2 hours, to an internal temperature of 145F. 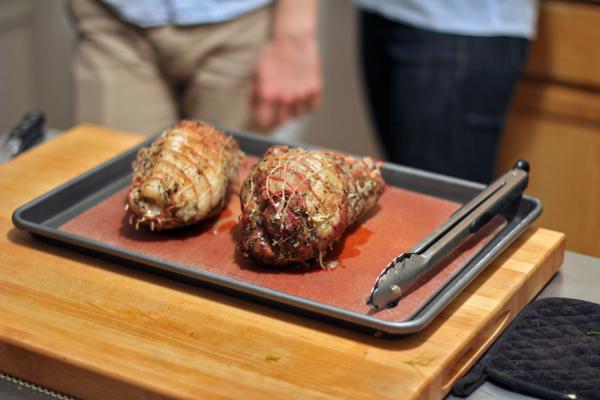 Remove the pork to a cutting board and keep it loosely covered in foil while it rests for at least 10 minutes (the meat will reabsorb the juices, ensuring it's as moist as possible). Put the roasting pan on the stovetop (with the fennel still in it), pour or spoon off any excess fat, and turn the heat to high. Add the vermouth to the pan, using the liquid to scrape up any caramelized bits left from the pork in the roasting pan. Cook, stirring often, until the fennel is soft and caramelized and the vermouth has mostly evaporated.