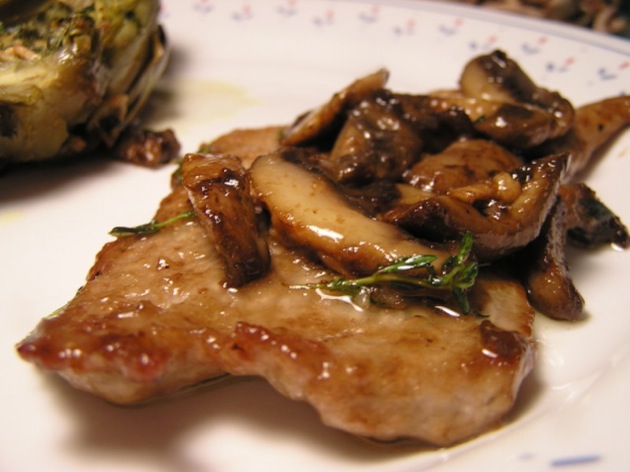 Happy New Year!  Those are the first words we've written in a long time here at the Paupered Chef because for all the holiday spirit, the roasts, the wine, and the interesting family rituals we could have informed you about, we decided to be lazy.  Unlike successful people, we took the break for exactly what it was, and waited until our respective families fed us until we couldn't stomach any more.

What I did do during the holiday was finally read the Omnivore's Dilemma .  Consequently, I've been thinking quite a lot about the ethics of my eating even if I haven't been cooking very much.  I'll save you the book report, and just highly suggest that you read it.  It tackles many serious subjects, from industrial farming, organic farming, and the so-called beyond organic farming.  But what really fascinated me was the section that discussed the "dilemma" of eating animals.

As an avowed meat eater, I went in with my own prejudices, many of them centered on the idea that animals taste really, really good.  But I had always admired the restraint that vegetarians demonstrated, thinking myself too weak to partake in such a noble experiment, even if I had questioned the health benefits of a meatless diet.  I luckily left with the some ideas that I'd never even considered and all in all it made me feel rather wonderful to be a meat eater.

But something I've been considering more recently is the place of veal.  Force feeding ducks to make foie gras, which has recently been outlawed in Chicago, seems tame compared to the lives that veal have to go through.  Or at least that's what some sites showed me.   Which is disconcerting considering veal is one of my very favorite foods and I had just purchased some from the butcher shop.

I had gone to one of the finest butcher shops in Brooklyn, G. Esposito and Sons Pork Store on Court Street.  Which doesn't mean I knew what I was doing.   I'd never bought veal before, and had only decided to buy it because I'd seen some old ladies asking for it while I was in line one time buying yet another pound of their soppresseta.

Veal is expensive per pound, but two thinly pounded filets still only put me back around 4 dollars, which I thought would be enough for two people.  I'd definitely leave this to the butcher unless you yourself were once a butcher or have a perfect veal flattening technique.

By the time I looked at my meat, it didn't seem to have much connection to the veal that it was taken from, and that's maybe why I've never had a thought about eating what is essentially calf.  And in the end I was more upset with the meal I'd created than ashamed at the animal I'd eaten.  The artichokes I made came out all greasy and hard.  And the thinly pounded veal shrank when I added it to the pan.  So instead of pondering the ethics of eating another animal's flesh, especially one that might have been raised in inhumane surroundings, I just wondered why I hadn't bought more of it.

For anyone wanting to test their ethics, this veal recipe is the easiest place to start. 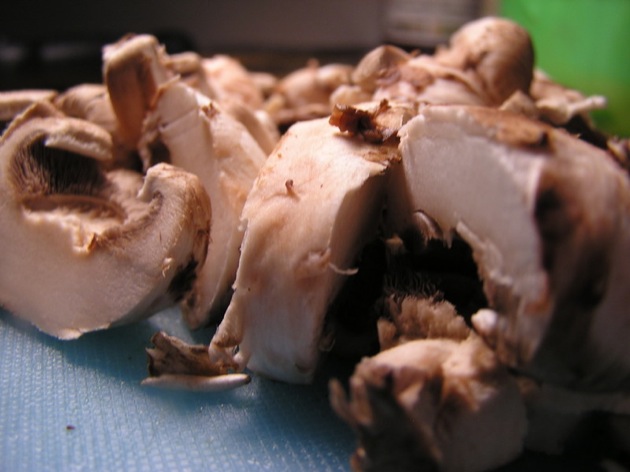 Adapted from the Food Network . 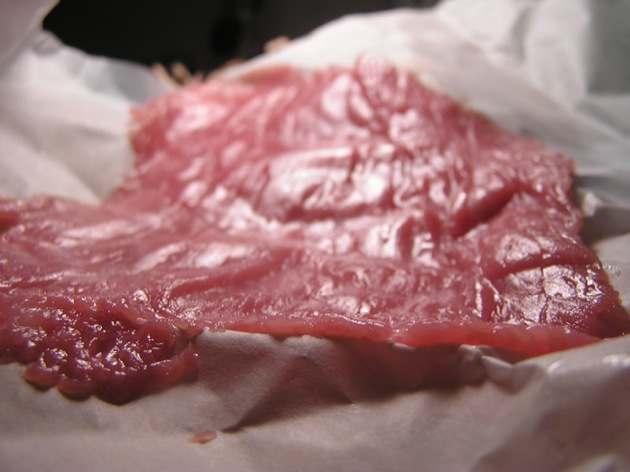 Getting veal pounded thinly is the most important step in the recipe, and unfortunately, most people will have to have it done by a butcher.  It takes little time, and the friendly folks at Esposito were happy to do it. 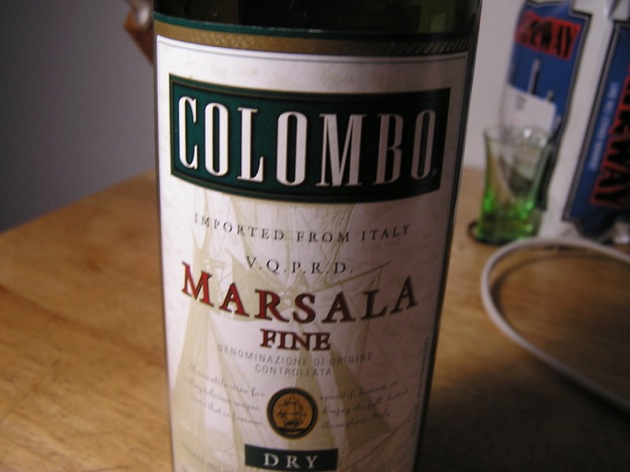 You can use a slightly sweet Sherry, but I'd just spring for the Marsala, which was less than $10 and will last for awhile.  It's also tasty in its own right. 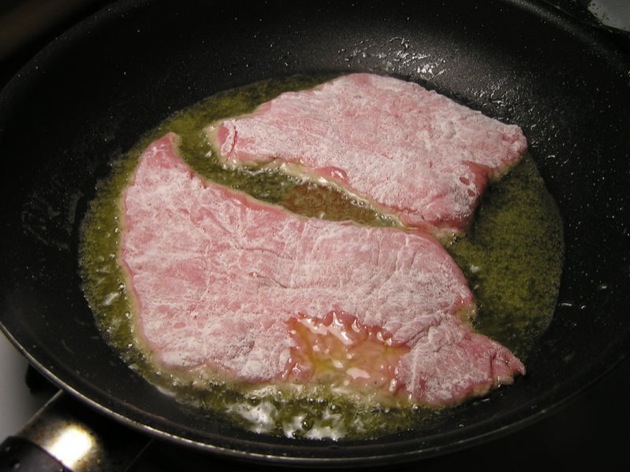 Heat the oil in the pan over medium heat.  Quickly dredge the veal in the flour, shaking off the excess, and place in pan. 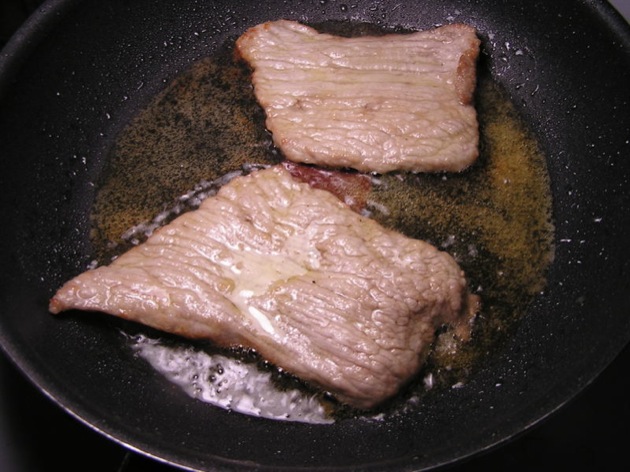 Cook for about two minutes per side.  Then remove and keep warm. 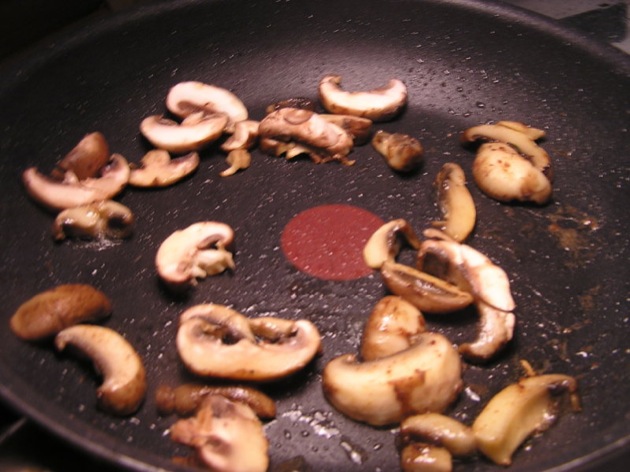 Add the mushrooms to the pan and cook until they release their water. 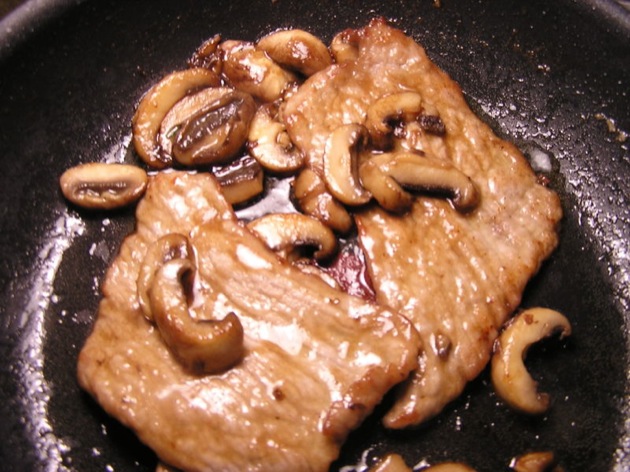 Then add the Marsala, crank the heat to high, and reduce by 1/3.  Then add the butter and the veal back to the pan, and cook over medium heat for 5 to 6 minutes.  Add the thyme at the end and season with salt and pepper.