Short Ribs Finally Worth Writing About 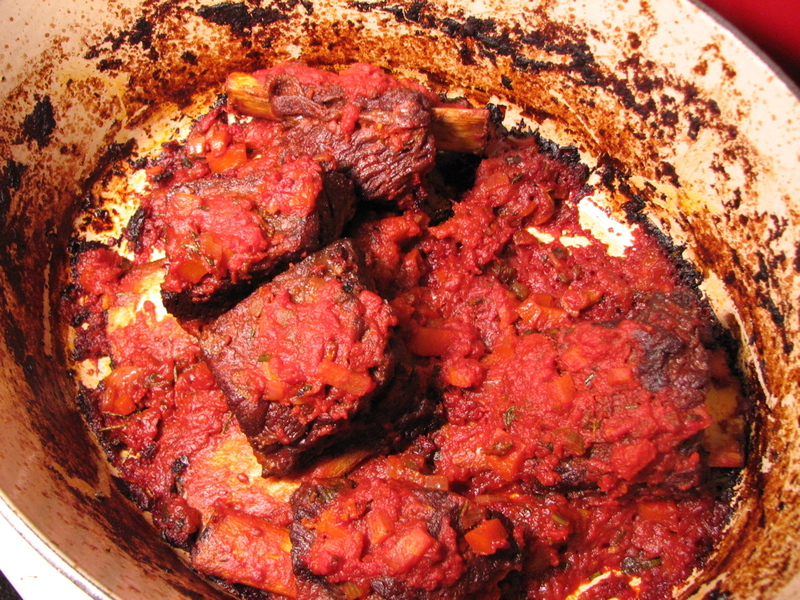 The most well-documented failure on this website was the first time we cooked beef short ribs .  Tough, sinewy, and ugly--a big fibrous brick of protein fastened onto a sled of white bone by tendons and mysterious pieces of grizzle.  Short ribs are the beef equivalent to a Salman Rushdie novel: willfully difficult, at times indecent and gross, but after an extended period of histrionic outbursts and piquiant flavors, in which patience and goodwill is put to the test, rewarding.  In short, frustrating. But worth the long road to get there.

The first time we cooked this dish, we bailed out early, cocky and confident that it was the short ribs that were going to adapt to our schedule and aesthetic interests.  Naturally, they came out tough and dry, despite having been cooked underwater.  There may be no dining or cooking experience more frustrating than having a piece of meat that's tough and dry, even when there's lots of sauce and broth to spare.  Why isn't the meat tender?  How can it be dry when it's sitting in a puddle?  Why doesn’t that stupid liquid just get in there and moisten up the meat?  It's a mystery.

Granted, we didn’t play by the rules, ignoring time, science, and technique.  In fact, one commenter named “CCC” casually mentioned that I “took that wonderfull [sic] recipe and executed it with complete ignorance. cookng [sic] is a multi dimensional process, it appears you only cook on one level.”  I emailed to ask if CCC might enlighten me about those other dimensions I was missing, but I haven’t heard back yet.

It's actually quite simple.  The connective tissues in the ribs--cartilage, joints, etc., also called collagen--must hit 160-180 degrees before they dissolve into gelatin, when the meat is suddenly succulent and the gelatin holds onto the flavor in the cooking sauce, binding it with the meat.  The only problem is that muscle fibers (the actual meat) lose their juices and dry out before then, between 140-150 degrees.  So in principle, you either have rendered gelatin with dried-out meat, or suitably juicy meat cooked correctly with tough, chewy fibers running through it.

The answer is to braise with sufficient juices and liquid for the meat to stay moist, of course, but most importantly you must keep the ribs at the absolute collagen-melting minimum for an extended period of
time.  There’s a sweet spot where the meat doesn’t dry out, but the connective tissue also dissolves.  If there's sufficient cooking liquid all around, it will become gelatinous while absorbing lots of cooking
liquid.  And it’s got to stay at the right temperature for a long, long time.

After more research, I realized that the oven was by far the easiest way to control this.  My first try was cooked on a stovetop at a simmer, but it was hard to keep the pot from getting too hot and the liquid bubbling, at which point the meat may be beyond saving.  If you put it in the oven, you can dial it in to that exact temperature zone and feel confident that the meat is braising at the right temperature. Also, the word braise means “smoldering coals,” referring to the way French peasants would pack a heavy pot with coals under, on top, and on all sides.  Even though I’ve been known to go to great lengths to reproduce authenticity , I figured an oven would be a sufficient replacement for this technique.

I also picked up a few tips from Madelein Kamman, the esteemed grandmother and author of Making of a Cook , who recommended the use of tin foil tightly packed on top of the meat, and explained why you can tell the meat’s done cooking when it suddenly absorbs a great deal of the cooking liquid.  The other thing I realized was that, since the meat would go through this process, it was safe to really get down to business on the initial browning, going for at least 15 minutes or so and getting a great crust on the meat to create flavor.

So when they went on sale at Fairway in Red Hook, I decided it was time to face my short ribs demons at last.  Really, this is an easy recipe, and a forgiving technique, and I think now I’ve gone in the right direction.  Give it the full cooking time in the oven, the right temperature, a very thorough browning, and you’ll end up with a successful batch of short ribs. 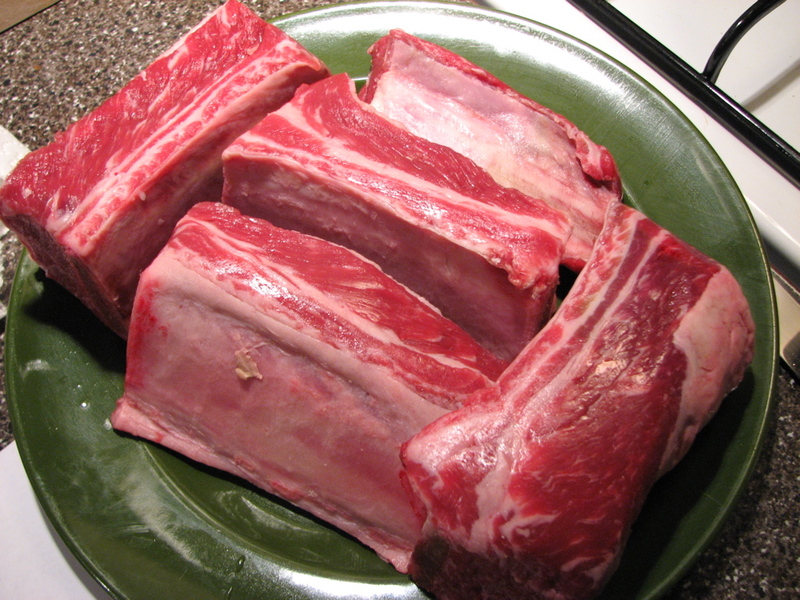 Serves 4, according to Mario.  I had about a pound and a half of short ribs, five of them, so I'm not sure where Batali is able to locate these 1-pound short ribs he calls for in the recipe.  What I had was more than enough for two people.  So I basically guessed on the amounts for the rest of the ingredients.  I don't think it's going to matter all that much.

First, you really need a heavy, heavy pot for this--a dutch oven is perfect, or unenameled castiron.  Preheat the oven to 375.  Salt and pepper the ribs generously, then heat the olive oil until just smoking and add them.  Don’t crowd the pan, or else the steam released from the ribs will interfere with the
browning of their neighbors.  Do it in two batches if necessary.  Let them sit on a side for 4-5 minutes, then turn, so that a golden brown crust happens all over the place and there’s no red still visible. 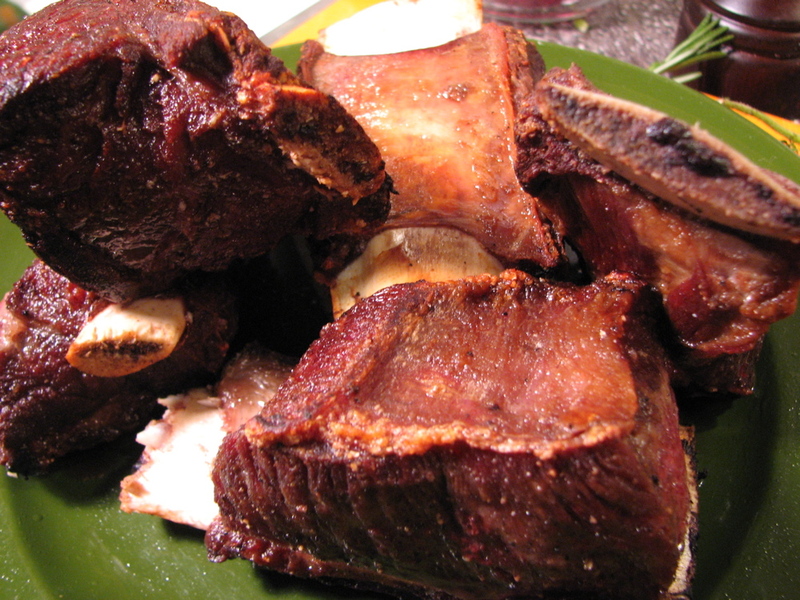 It was at this point that I realized, in my confusion and generally fretting over my short ribs, that not only was I missing the correct type of tomatoes (whole peeled that you crush yourself--I had pre-crushed, which are a lot darker and less bright-tasting), I'd added four times the necessary amount according to how many ribs I had.  Dismayed, I removed most of the sauce and adjusted the herb quanties and such.  It all turned out quite fine, and now I had a really flavorful pasta sauce in the fridge.  Like I said, the flavors in this dish are so huge and dramatic, it's not all that important.  There just needs to be enough liquid for the ribs to absorb while cooking.

Bring the sauce to a boil, then add the ribs. 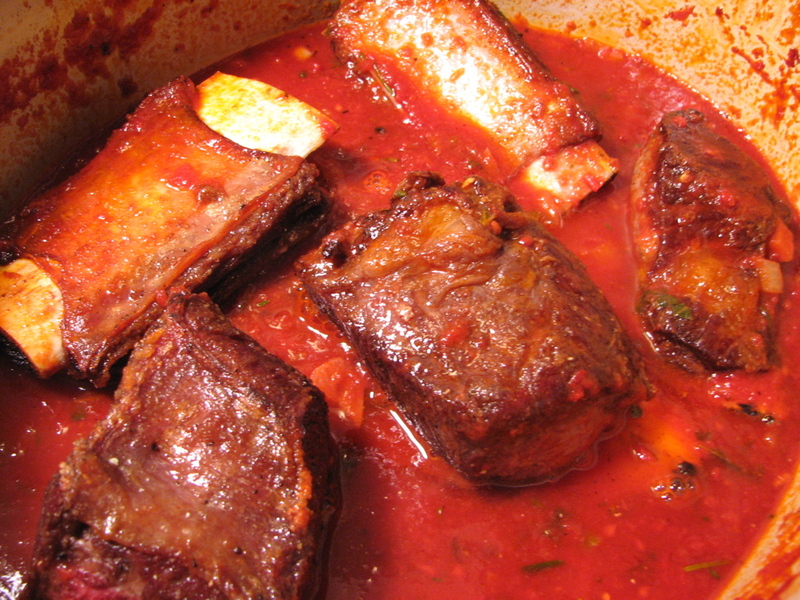 I added more sauce after taking this picture, so that should help you judge.  I'd say the ribs should be half-covered in sauce.  Cover the pot with tin foil, creating a kind of concave lid that dips down into the pot and serves as a low ceiling over the meat.  According to Madelein Kamman, this is quite important, though Mario Batali doesn't deign to mention anything of the kind.  Anyway, put it into the oven and cook for 2 hours, without peeking.

In the meantime, you'll make the "gremolata," which is apparently a mixture of parsley, lemon zest, and horseradish.  This becomes a wonderful little zippy topping that cuts through the rich heaviness of the dish. 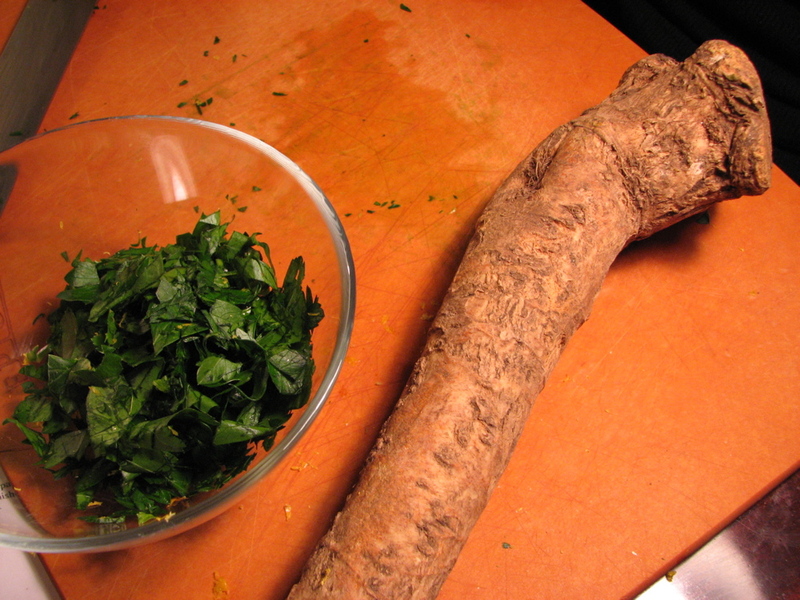 And that, ladies and gentlemen, is what fresh horseradish looks like.  I'll leave it at that.  Peel it, grate into a bowl, and add finely chopped parsley with lemon zest.

When the 2 hours are up, peek in the pot.  The ribs should actually, literally be separating from the big piece of bone.  If not, make sure there's enough liquid and let them go another 20 minutes.  With cooking times this long, you can improvise with huge brushstrokes.  20 minutes, 30 minutes, whatever you think.

Serve with the gremolata sprinkled on top.