The Case for Going Animal Style: The Double-Double In-N-Out Clone 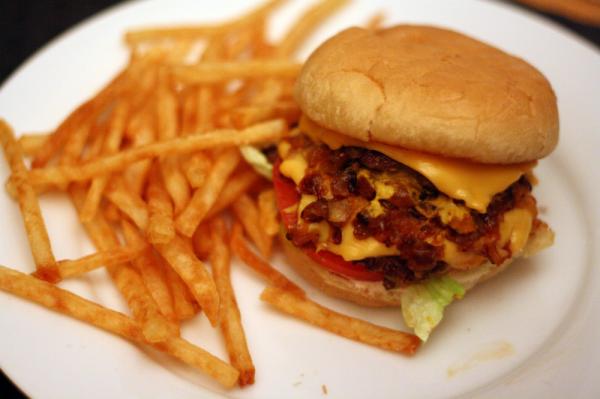 Sometimes I feel like I’m the only one railing against the big burger tide. While nearly every new restaurant opening in Chicago features a big, fat burger on its menu, I’m that guy that prefers thin little griddled burgers. Usually I can only find them at old school joints, but even these are frequently harder to find these days. It’s getting to the point where I haven’t eaten a burger at a restaurant in months. I have an epic anti-big burger rant in me somewhere, but I’ll save that for later. How about what I do like?

Basically, I’m not quite sure a burger can possibly taste any better than this clone of an In-and-Out Double-Double, Animal Style. For those unfamiliar with the storied California chain and this glorious burger, the Double-Double features two ⅛th of a pound patties, two slices of American cheese, lettuce, tomato, raw onion, pickle, and their secret sauce all on a griddled bun. Get that guy “Animal style,” and the burgers are griddled with smear of mustard, and the raw onion is replaced by some seriously caramelized onions, which are sandwiched between the patties.

Calling this thing balanced seems slightly ridiculous considering the caloric overkill, but for some reason the desperate elements (vegetable, meat, cheese, bun, condiments) combine to create something truly unique. The caramelized onions between the patties are especially inspired, acting as a sort of juicy center, which bests any medium-rare burger you could throw at me. But, like I said, I wasn’t going to get into that argument.

Used to be that you couldn’t get one unless you lived on the West Coast, and even when you could, some have questioned whether the chain is overrated or not. While my four experiences have all been spectacular, my point is not to say that the Double-Double, Animal Style from In-N-Out is the best burger in the land, but that this clone recipe by J. Kenji Lopez-Alt for Serious Eats might just be. Considering the recipe is so good, it’d be kind of ridiculous to completely repeat it here, so I’d advise you check out the whole thing over on Serious Eats. Oh, and those fries... That’s another Kenji recipe, and those are nearly perfect, too.