A quicker, easier process than the whole brisket 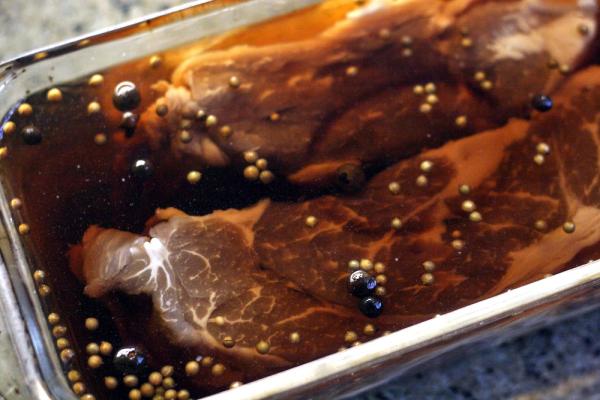 Corned beef is one of the more basic and surprising kitchen experiments. But I think that people still think it's pretty nuts.  I'm staying in California for a couple weeks, and had to buy the ingredients, cook, photograph, and eat this project while staying at someone else's house (sorry for the lack of pictures).  First of all--it's really tough cooking somewhere you don't have all your familiar tools! But I think it's a testament to how simple it is to make corned beef that I could pull this project together while on vacation with nothing special .  When I served it to my hosts for breakfast with grits and kimchi, they were completely amazed that I'd made this corned beef on the sly in their fridge right under their noses!

It goes like this: you take some beef, usually a cheap cut (because making corned beef out of ribeye would be criminial), soak it in a liquid made up of salt, sugar, and spices, then simmer it slowly until it yields to your will, i.e., it becomes tender, succulent, juicy, falling-apart good. And with a flavor that's totally different from a beef stew, thanks to the curing process which leaves the meat piquant, pink, and with that unique corned beef taste.

It's that time of the month again — charcutepalooza time. The blogging challenge this month isn't to make bacon or pancetta , but to brine some meat.

Brisket is the most common corned piece of meat—a cut that has a gorgeous amount of fat knitted into it as well as a cap of fat that runs along the top. It's the basis of corned beef as well as pastrami, which is smoked. The only problem is, you usually have to buy a whole brisket, unless you have a very good butcher friend, which is far more than you need, and end up scrambling to use up the whole thing.

The bonelss short rib fills the gap nicely. Equally marbled and in need of slow-cooking attention, it comes in a more convenient size, and takes less time in the brine to be ready. I first encountered the short rib cooked this way at The Publican , where I had a brunch dish made up of a bed of grits, a pastramied short rib, a fried egg, and giardiniera scattered over the lot to bring the dish a hit of spicy acidity in response to all that richness. 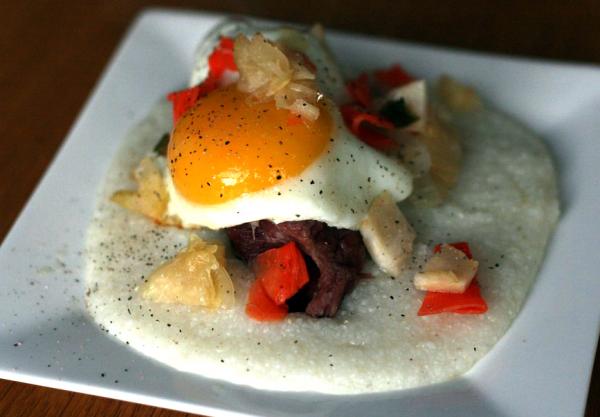 So I followed their lead when making up this dish, while taking it in a new direction, replacing the giardiniera with kimchi. It immediately reminded me of the Korean dish bibimbap with the salty beef playing against the rich melty egg yolk and piquant, tangy kimchi. But, you know, sort of Irish at the same time. 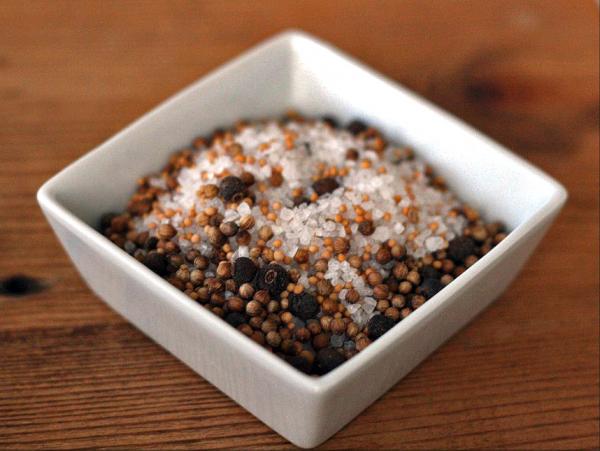 So what's so special about the cure? When it comes to the recipe for the brine, what really matters is the ratio of salt and sugar and water . The rest is just spices. I used coriander, mustard seed, allspice, and bay. But the basic ratio to follow, from Ruhlman, is here . For two short ribs it wasn't necessary to make the whole batch.

The one unusual ingredient is pink salt, or sodium nitrate. That's what keeps this from tasting like a beef stew (that signature corn beef flavor comes from pink salt) and it also keeps the meat red after cooking.  Pink salt is a pretty basic ingredient in the charcuterie arsenal, and you can order it here for cheap--also known as sodium nitrate, cure #1, Prague Powder--as long as it's pink, it will have 6.25% nitrate.

The best way to make the brine is to use half the water, heat it until the sugar and salt are dissolved, then dump the remaining water as ice to bring it back down to temperature.  It needs to be room temperature or colder before you add the meat, then refrigerated immediately. After 5 days, my short ribs were ready---then I drained the brine, rinsed them, and simmered them slowly in a snug saucepan with some carrot and onion until absolutely tender.  Took about 3 hours.  Then I wrapped it up for my very delicious breakfast--which I served to my unsuspecting hosts to very enthusiastic response.