Plus, a Killer Recipe To Use It In 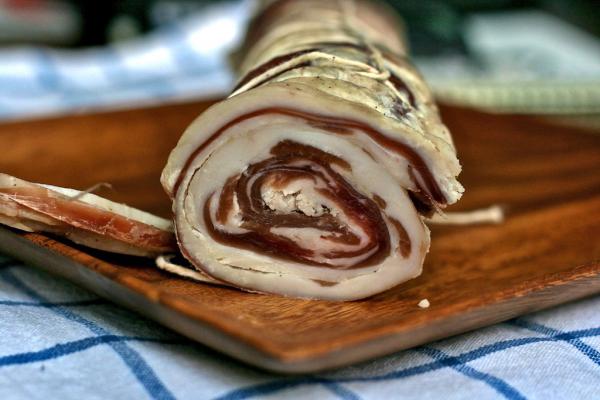 We are thrilled to be participating in Charcutepalooza , an organized blogging movement of people writing about the noble art of charcuterie. Scores of people around the country (or even the world?) are making and writing about bacon, pancetta, and other delicious variations this fine month of February—and throughout the year, will be embarking on ever-cooler projects like brining, and smoking and drying and fermenting (the organizers of Charcutepalooza announce the month's challenge on the 15th of each month, which is also when the previous month's challenge is meant to be posted). The more people making salty and moldy products, the better, we say.

We've done a fair bit of charcuterieing on this site , starting with duck prosciutto back in 2007 on to bacon and gravlax and guanciale and beef jerky . The charcutepalooza challenge this month is to make bacon, or, for more ambitious cooks, a dry-cured product like guanciale or pancetta. So I tried to think of something unique that we've never tried.

It started with an idea to move beyond pork. Which led to some Internet research, then a tweet seeking lamb belly, and conclusion at Butcher & Larder , Chicago's new butcher shop by former Mado cook Rob Levitt.

Twitter is an amazing thing—a quick inquiry and minutes later Rob and I are communicating (on a day when B & L was closed) about when I could pick up my belly. 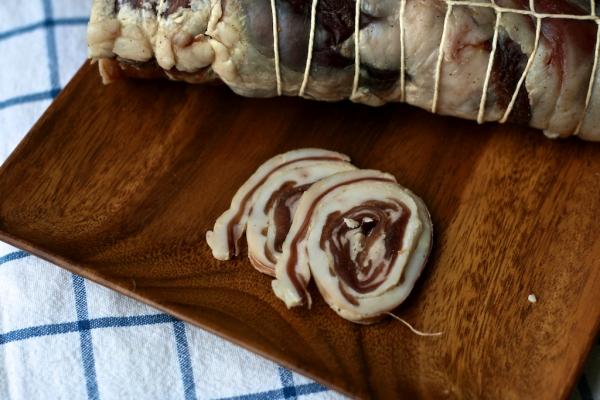 Did you know lamb has a belly, like a pig? It's not nearly as popular, nor as thick or versatile, but it's there. It's sometimes called lamb flap or lamb breast, but in all cases it comes from the side of the lamb, extending off of the rack or loin.

I immediately noticed how much thinner it was than pork belly—especially in this case, when it came from a smaller (about 50 pound) lamb, according to Rob. Though I was initially planning to make a straightforward lamb bacon, he suggested rolling it up into pancetta because it's so thin. So I took that advice 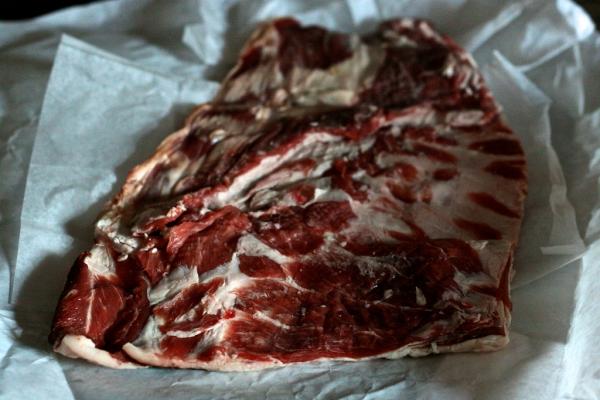 The process for curing anything is pretty simple: salt, sugar, and pink salt. It's not a bad idea to mix up this "basic cure" in proper proportions to have around; seasonings and herbs can be added depending on the recipe. 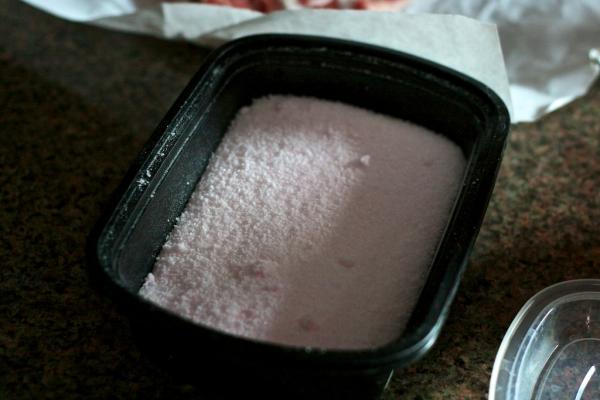 Once you have this cure mixed up, making homemade bacon takes hardly 5 minutes here and there--and it becomes a regular part of your routine. I'd recommend a gander at my homemade bacon post to learn about the basic procedure. 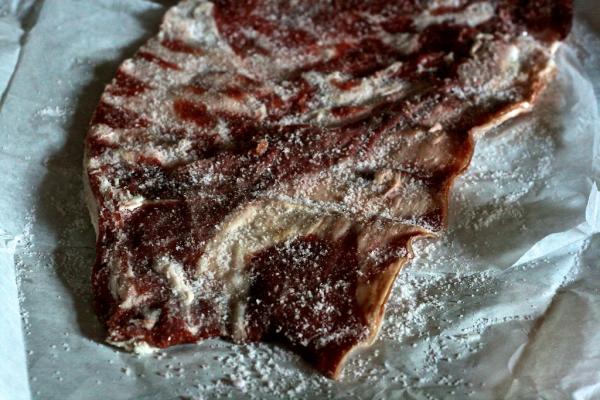 First, you rub the belly with the basic cure.  As you can see in this next picture, it's quite thin. 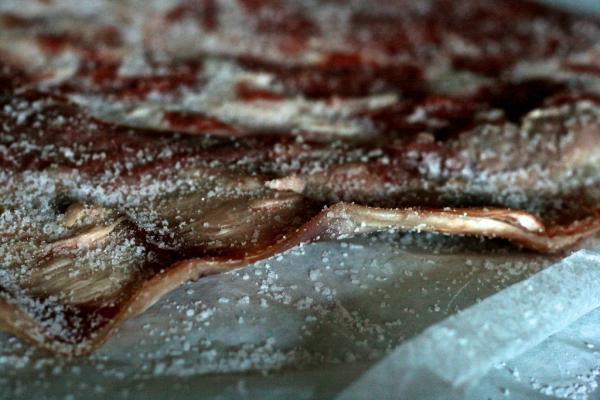 Next, I added in the seasonings I wanted to use: for the lamb I went with crushed mustard seeds, black pepper, lemon zest, and crushed rosemary. 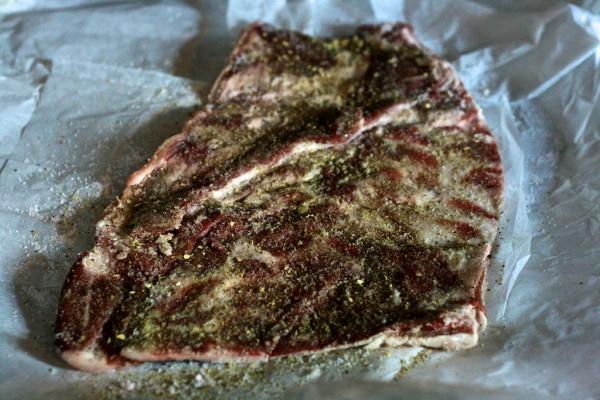 Then it went into a plastic bag for transfer to the fridge to cure.

For the lamb, again, it was thinner—so I cured it for a much shorter amount of time, just a couple days instead of the 7-10 pork belly can sometimes require. Once it's firm throughout, it gets a rinse and a thorough drying. 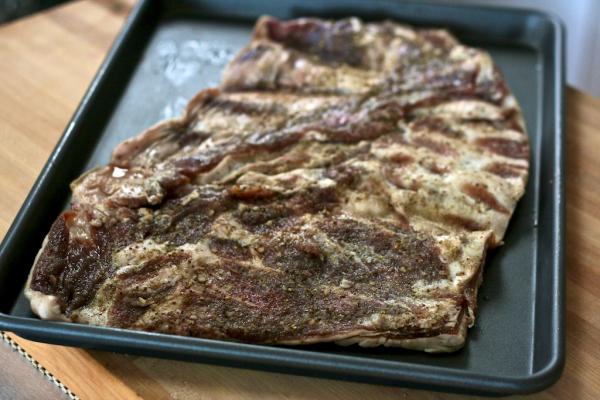 The most challenging part of pancetta is the tying process. Here, incidentally, is where pancetta diverges from bacon—bacon is usually smoked, or cooked in a low oven, and kept in a slab for slicing. Pancetta is rolled up tightly into a package, then hung to age for awhile. This accomplishes a couple things: it dries it out a little bit so it keeps longer, and it allows flavor to develop. It gets a bit funkier and richer.

It's important to roll this thing as tightly as possible to eliminate air pockets. 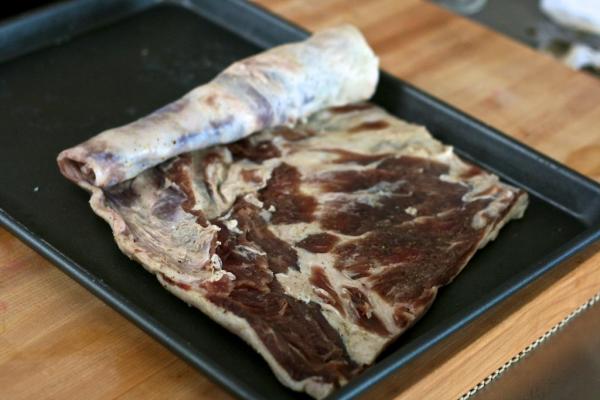 Once it's tight, tie a loop around one end as a temporary solution to hold it together. 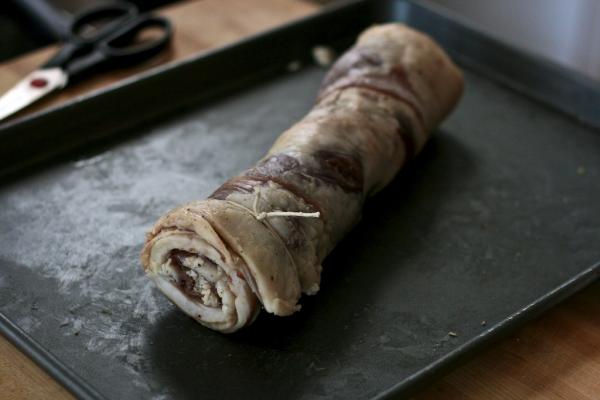 Next, take a really long length of butcher string and looped it around the other end. To tie off one end, make like you're starting tie your shoe, but instead of just going over the other string once, do it twice. 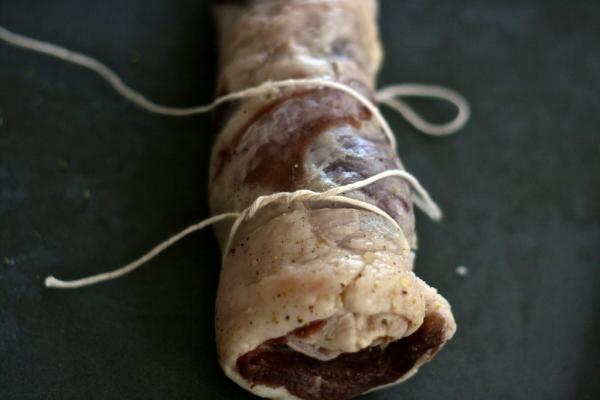 This way you can cinch it down really tight and it won't slip loose when you tighten it down.

Tie it off into a knot. Next you make a loop like you see in the picture below. 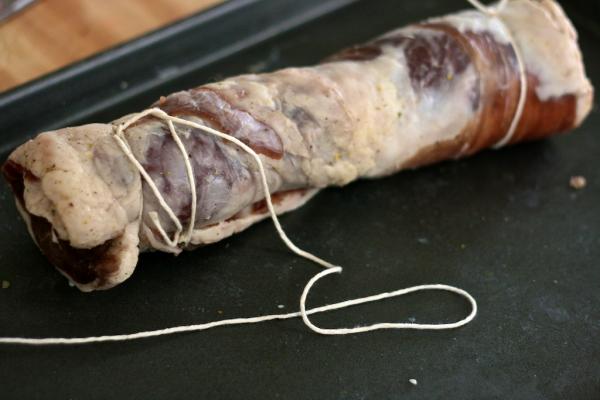 What's important is that the long end of the string is the behind the loop, not the front. 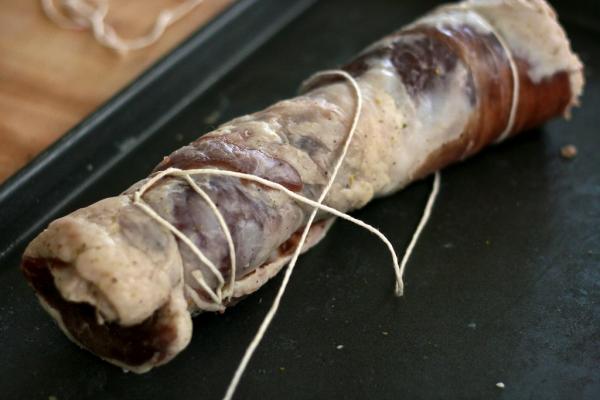 Then you take that loop and slip it over the opposite end of the roll, lifting the meat to allow it to slide almost all the way back down to where you just tied off the string. 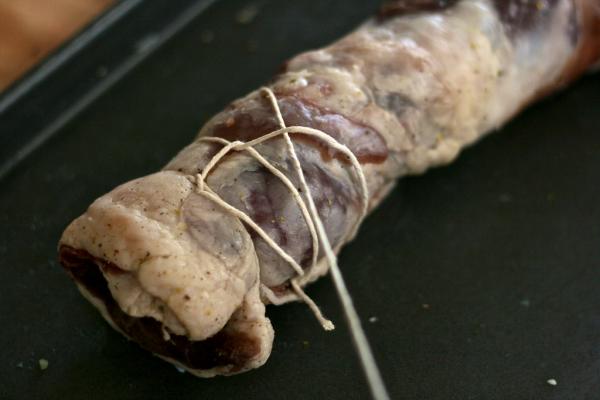 You can see how once we start to pull on the string, it makes a tight little loop that we can cinch down nicely. 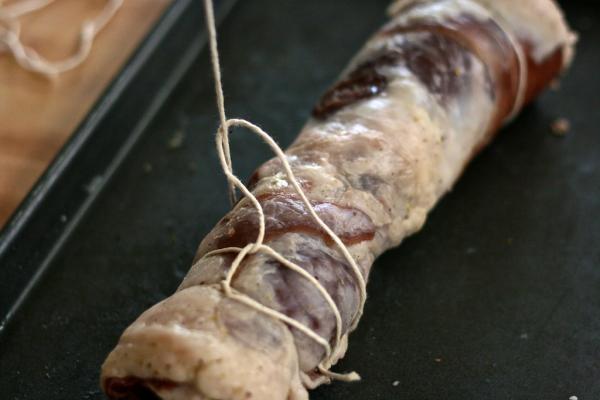 Then we keep repeating this process all the way down. 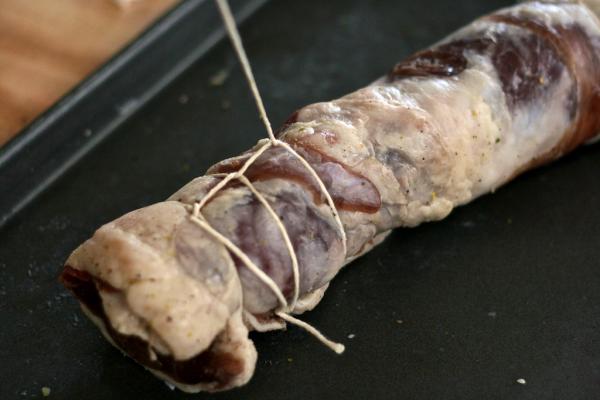 Once at the end, take the string and run a straight line all the way back to where we started on the other side, weaving it under every other loop along the way. Then tight it to the loose end of string. 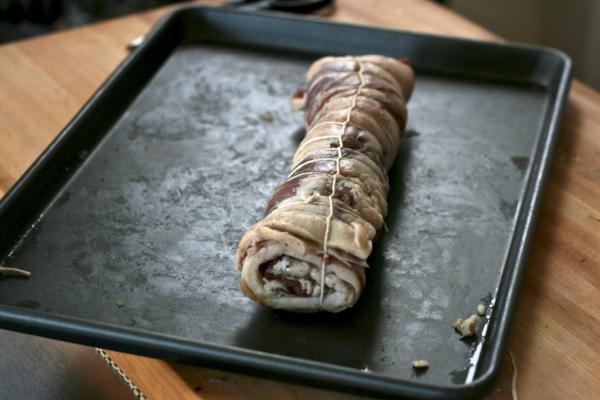 Once it's tied up and tight it's ready to dry a bit. Luckily, the weather is pretty chilly in Chicago, so I hung it in my closet where it's about 60 degrees. 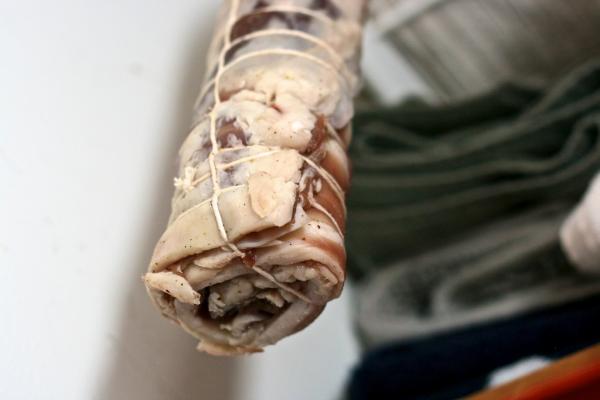 Not an ideal environment--way too dry--but what's important to remember is the drying process is not a critical part of the end result. It adds flavor and makes the pancetta hold itself together nicely, but at this point you could cook it like normal pancetta. The drying is just for flavor, so I only left mine hang for a few days.  We're going to cook it anyway, so no big deal.

When I took it down it was just a bit dry on the outside and firm to squeeze. It sliced up beautifully.

Now: what's the best way to use a nice bit of homemade lamb pancetta? 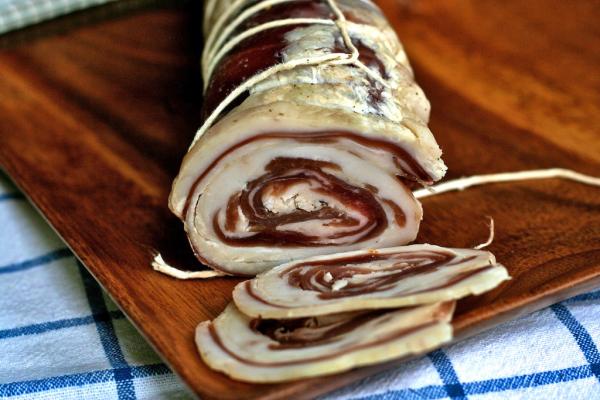 My old friend the Brussels Sprout. It's a proud member of the invincible brassica family , invincible because they seem impervious to being burned; they only seem to get deeper and more caramelized. See also: cauliflower, broccoli, cabbage. 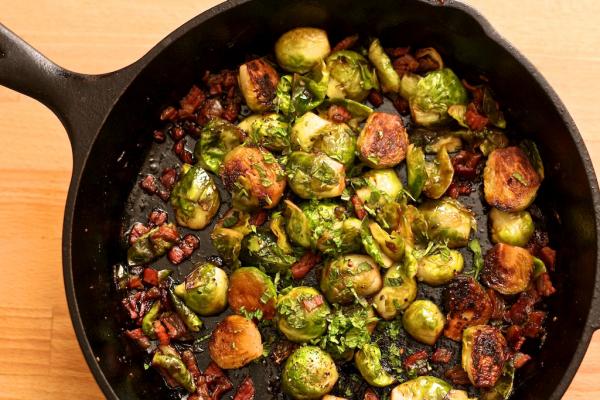 I started the pancetta over medium heat. It behaved just like its pork counterpart…the fat rendered out beautifully as the pieces began to turn golden and chewy. 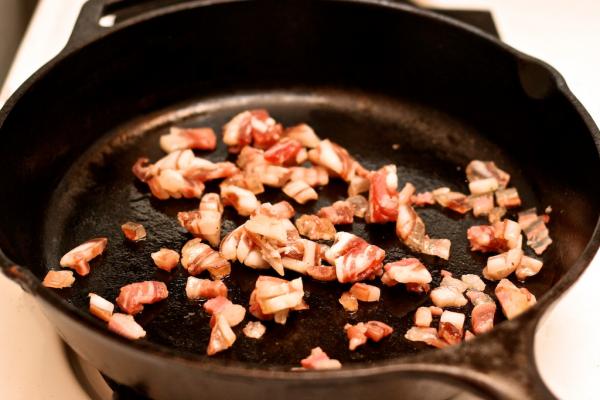 I nestled the split sprouts cut-side down in and amongst the pancetta and kept the heat on until they were nice and golden, even quite dark in spots. Then I slipped it under the broiler to finish up. 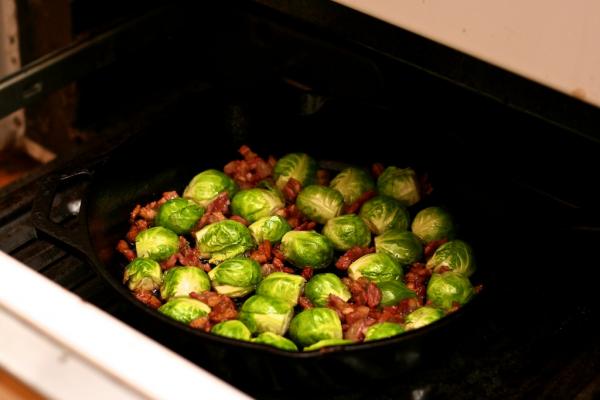 Back on the stove, I tasted one to make sure it was cooked through (they're rather bitter and disappointing unless you cook them until tender throughout), then splashed in a bit of balsamic vinegar and let the sprouts soak it up. Off the heat I finished with a sprinkle of mint because, you know, lamb.

AWESOME. No kidding. The lamb pancetta is unbelievably good and I'm really not trying to toot my own horn here . It has that tangy funky element that comes from delicious cured meat (it seriously almost takes like pork) but with a complex gaminess unique to lamb. If you can get your hands on lamb belly, I would highly, highly recommend this project.